Music therapy program is more than just playing for an audience 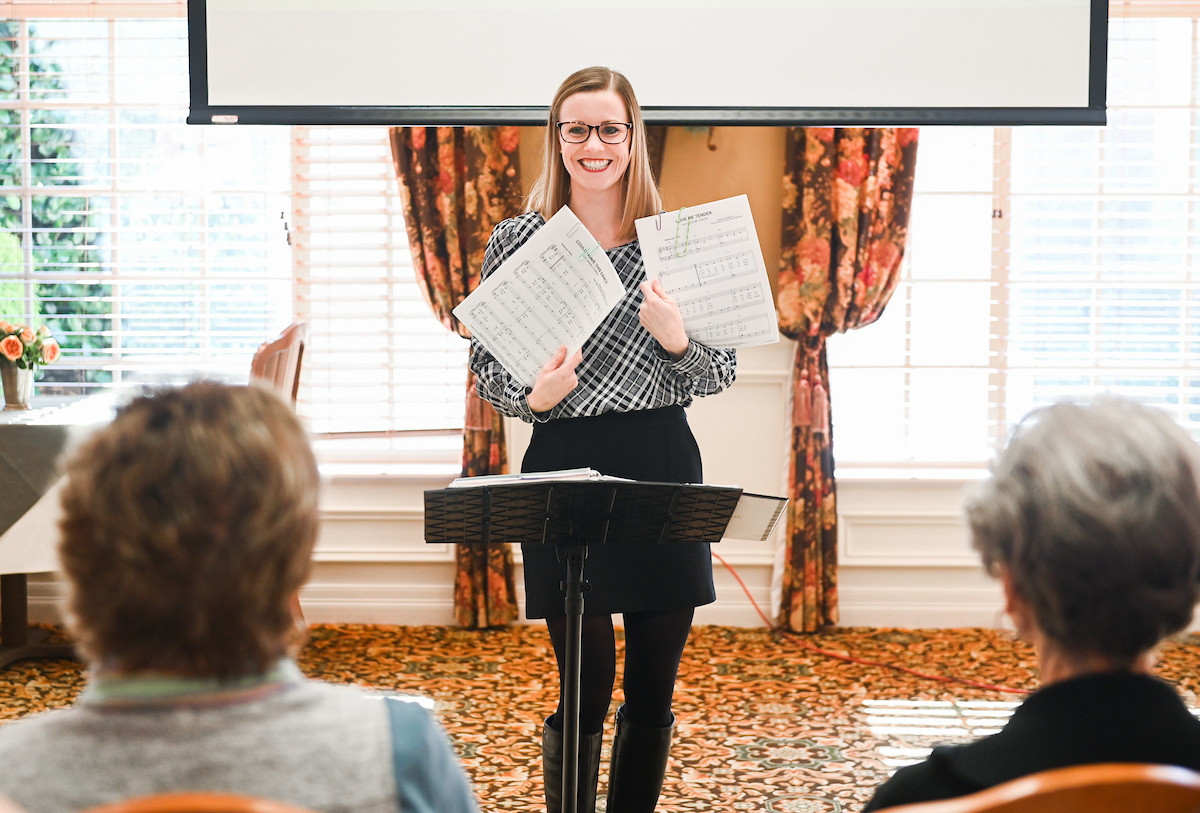 The Trembling Troubadours singing group rehearses at the Life Care Center of Hixson. Troubadours all have Parkinson’s disease and are under the direction of Katie Elverd, director of UTC’s music therapy program.

Tennessee’s first public university program of its kind prescribes music as medicine. The much-anticipated music therapy major launched at the University of Tennessee at Chattanooga in fall 2019 and already has surpassed enrollment goals.

Chattanooga native Katherine Goforth Elverd—“Katie” or “Professor Goforth” to her colleagues and students— returned to Chattanooga after working as a practicing music therapy clinician in pediatric settings and teaching music therapy at the university level.

Goforth now serves as director of the music therapy program. She was instrumental in bringing the new area of study to UTC, but the path to get here wasn’t an easy one. Serious talks began when Goforth and Erlanger Hospital Vice President of Public Relations and Marketing Jed Mescon met with leaders in UTC’s Department of Performing Arts to explore collaborating for a potential program.

Goforth’s argument for music therapy and data proving its community impact so impressed UTC Head of Performing Arts Stuart Benkert that he immediately scheduled a second meeting with university administrators.

“Before the presentation was even over, Gerald Ainsworth, the provost at the time, looked at me and said, ‘We need this program, make it happen,’ so I said, ‘Yes sir,’” Benkert explains.

Goforth says clinical music therapy has a strong presence in Nashville, but she believes there’s a great need for it locally. Before the undergraduate music therapy program came to UTC, the closest public program was at the University of Georgia, “so we were losing students to a neighboring state,” she adds.

The program is built for a diverse student population with various educational backgrounds. Students can enter as first-time freshmen, transfer into the program or enter it after earning another bachelor’s degree in a complementary discipline such as nursing, special education or music education, psychology or social work, to name a few. 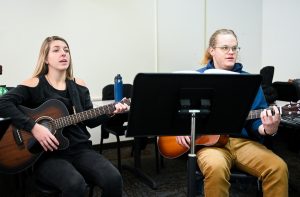 Kennedi Walz would have been one of those forced to look elsewhere. The Manchester, Tennessee native took advantage of Tennessee Promise by earning an associate’s degree in music from Chattanooga State Community College, but she always had her sights set on music therapy. After completing the two-year degree, she was torn between UTC and the University of Georgia.

“I had heard the program [at UTC] was possibly a thing, so I came to UTC on hopes and dreams,” Walz says.

When it officially began, she was ready. As part of the program, she is spending a lot of time working in the Chattanooga community through multiple practicum experiences. She says those, by far, have been her favorite part of the program.

“We get a taste of a different population each semester. Last semester I was with older adults participating in a Parkinson’s choir, the Trembling Troubadours, that Professor Goforth directs at Life Care Center of Hixson, and I loved it, Walz explains. “So I’m kind of broadening my perspective.”

She plans to graduate from the program in summer 2021.

“If everything works out well, I will be one of the first to graduate from this program with my bachelor’s,” she adds.

Although many locals see the value in music, their perceptions of what music therapy is tend to be mistaken. Many assume if a musician is brought into a space where music is not normally found—someone playing piano in a hospital lobby or a guitarist visiting patient rooms—that this is music therapy, but it’s not. These are examples of “music enrichment,” Goforth says.

As an example, she describes visiting a child who is in pain in a hospital’s intensive care unit.

“I would approach that situation by first assessing the pain level on a scale of one to 10, then assess their heart rate, respiration rate, overall oxygen saturation levels. Because, based on my education and knowledge, I know how music affects all of those different parameters,” she explains. 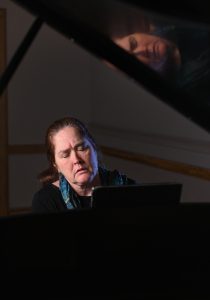 UTC alumna Martha Summa-Chadwick has a doctorate of musical arts and, as a scholar, has studied, practiced and advocated for music therapy for years. Her work in the field began when she was teaching piano at Cadek Conservatory of Music.

One of her students has a sister with autism, and the student’s parents asked Summa-Chadwick to work with the four-year-old sister. The child was nonverbal at the time and Summa-Chadwick admits that lessons were a struggle at first. Things took a turn for the better when Summa-Chadwick tapped into one of the girl’s interests: computers. She began using a computer program to teach the girl how to read music and, as the student grew more comfortable with communicating through music and singing along, her verbal skills increased drastically, Summa-Chadwick says.

After that experience,  Summa-Chadwick was hooked.

From pain management to Parkinson’s, from helping someone speak to helping someone walk, music strikes a chord with the brain that opens doors and unlocks potential. Neuroscience backs it up.

“When I first got into this I just said, ‘This is really cool,’” Summa-Chadwick adds. “But the more I see it, the more I say, ‘We have to move this way as a society. It can help millions of people. We just need to do it.’”

This story originally appeared in the UTC College of Arts and Sciences magazine, “Method.”