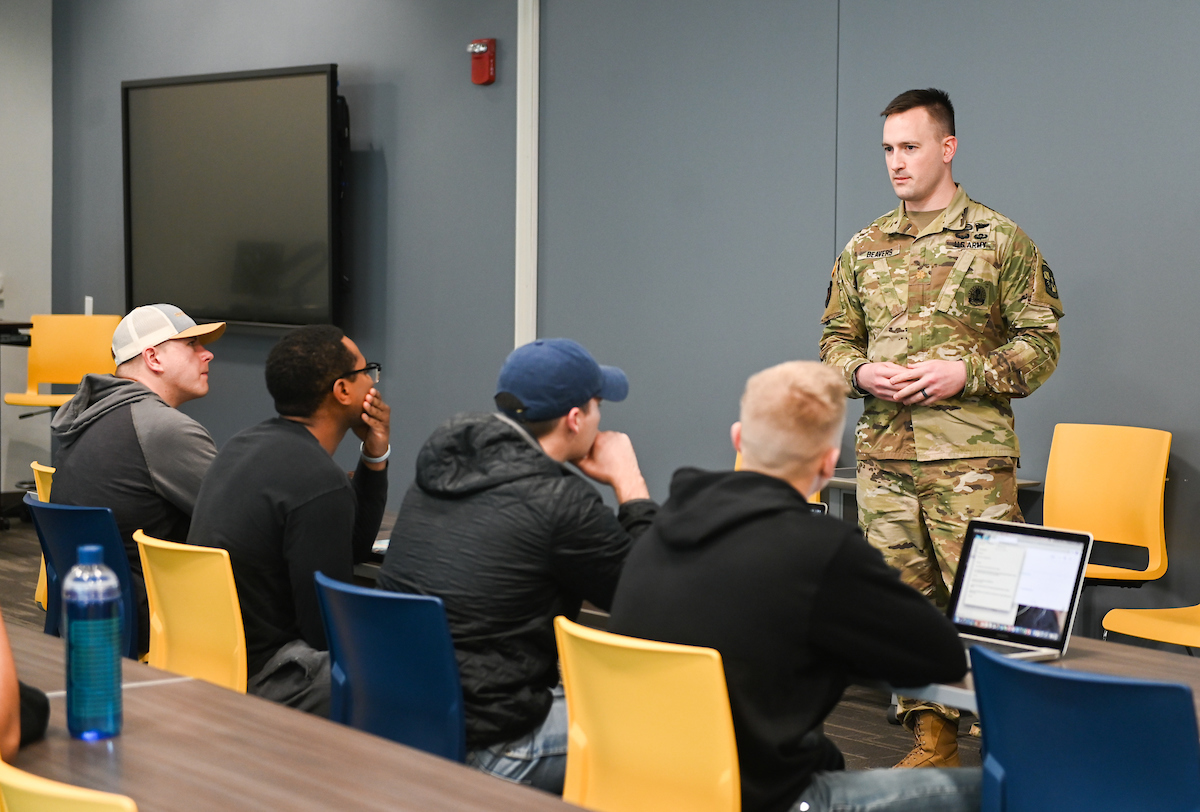 When Maj. Kevin Beavers talks about what he’s learned from his 13-year career in the U.S. Army, his cadets and his time at the University of Tennessee at Chattanooga, his pride is infectious.

Although he has a long list of pride points encompassing all three of those areas, one standout is his description of a leadership style he learned during his days as an officer: “servant leader.” In a few short sentences, he describes the servant leadership mentality, but the quick comment speaks volumes.

Officers always eat last at dinner in the cafeteria, he explains, because they serve dinner to the soldiers. Heaps of food are spooned onto each soldier’s plate as they come down the serving line and small conversations strike up. After every soldier is served, the officer can finally reach for a plate.

“The micro conversations that take place over that one scoop of mashed potatoes mean everything,” Beavers adds.

Since 2017, when he came to UTC to lead the ROTC program as associate professor of military science, he’s done his best to emulate that servant-leader attitude. It shows.

“I know now that I will not win the lottery because I used up all of my luck to get assigned on active duty here,” Beavers jokes.

“The way associate professors of military science are assigned for every college in the nation, including Guam and Puerto Rico, is kind of like the NFL draft. You never really know what team has the first pick or what side of the country is doing what,”

He and his wife Stefanie, both Soddy- Daisy natives, were happy to be coming home.

But he wasn’t the only lucky one, says Gen. B.B. Bell. The celebrated, four-star general graduated from the ROTC when UTC was still the University of Chattanooga.

“Since my retirement, I’ve watched several terrific officers come and go to lead that program, but nobody of Kevin Beavers’ quality,” Bell says.

“Nobody has had his level of success, understanding of the program and particularly his willingness to work in a unique foreign environment, a university,” Bell explains. “He’s had a willingness to work with the faculty in a way that everybody could come out winners and that the students, in this case ROTC cadets, would be best served by the full range of university services. He understands that with great clarity. So immediately, the assistance that he received across the board from the staff and faculty went up enormously.”

“They were glad to help because they had run into somebody who was willing to work with them, explain their needs, explain the program and let them understand what it was that the United States military was trying to do on campus. It created transparency. The willingness to work with everyone on the faculty was the first and foremost change that we saw in Kevin.”

Beavers’ ability to connect with cadets has been a source of success, too. When he arrived at UTC, he came with substantial military skills from his days at West Point Military Academy and as an Army officer.

“He had a wide breadth of experience and knowledge about what it takes to be a junior leader in America’s Army in the era of the War on Terrorism,” Bell adds. “So Kevin brought that experience to bear as he recruited, as he talked about the program, as he brought young cadets into the program.”

One major milestone for UTC ROTC was the recent creation of a military science minor. Historically, the majors for many ROTC cadets required a minor. In addition to their major courses, they were enrolled in their minor program as well as the ROTC program, which is just as demanding as a minor, Beavers says.

“They were running themselves ragged to try to be a college graduate and a commissioned officer,” he explains.

Now, cadets just select military science as their minor. UTC is one of the few programs in the nation to offer that choice, he adds.

UTC ROTC is the second most popular program in the 7th brigade, which encompasses programs in five states: Tennessee, Kentucky, Ohio, Indiana and Michigan. The UTC program also is larger than 17 other host programs in those five states.

Each year, the program has had at least one graduate who lands in the 7th Brigade’s top 10 percent of all graduates, he says. “They become distinguished military graduates, which goes on their military record.”

The program’s culture is changing, too, adding a more personal touch. One such change is reviving the ROTC’s annual military ball.

“I want to show my cadets and the leadership here at the University that
it’s more than just tactics and ambushes
and reactive contact. We’re not just combatants,” Beavers says. “We are people. We are leaders. We are husbands and wives and families.”

Beavers and his wife became parents in January with the birth of their baby girl. After 13 years of moving every two to three years, including deployments to Iraq, Afghanistan and Jordan, they are ready to stay home.

“Both sides of our family are from here, so I want to have stability,” Beavers says.

“I joke around with my wife that I’ve got to figure out what I want to be when I grow up, but I’m looking forward to staying in the Chattanooga community, still having an impact, in some form or fashion,” he adds. “So I’ll transition off active duty, but I still want to serve in some capacity through the Army Reserve or National Guard.”

And as for his current role as the dad of a newborn? West Point and Army Ranger School equipped him with some good training on sleep deprivation skills.

“I did not think I would have to use them to the maximum, but I do.”

This story originally appeared in the UTC College of Arts and Sciences magazine, “Method.”