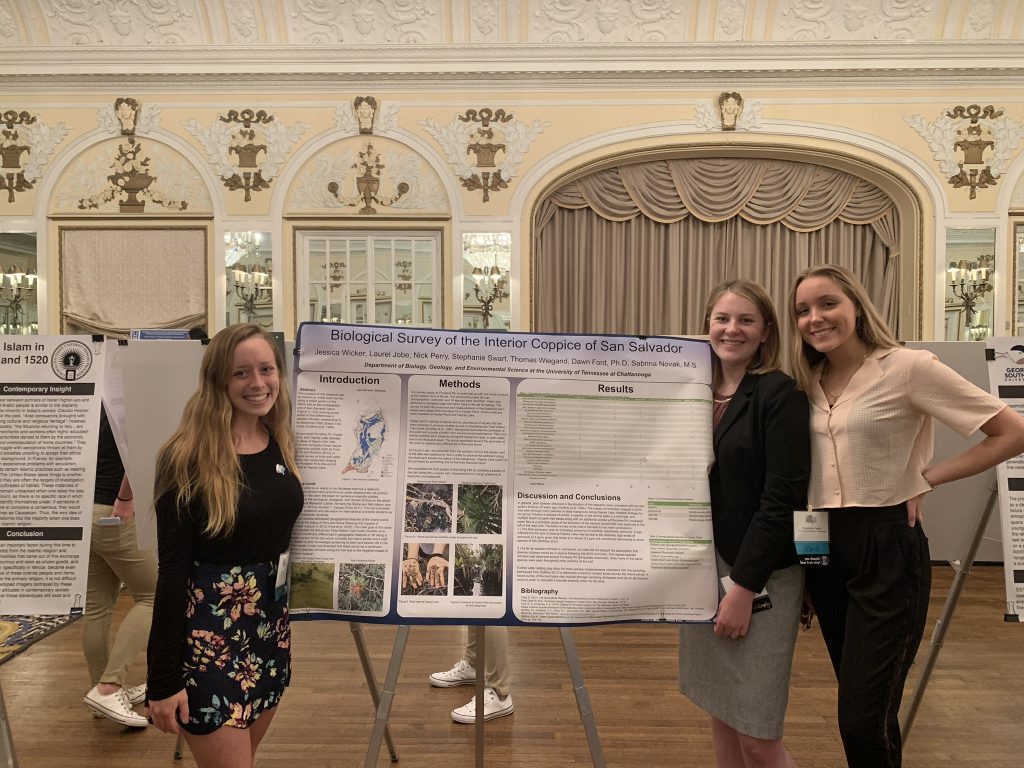 Laurel Jobe was on a study abroad trip with the Honors College when the University of Tennessee at Chattanooga began responding to COVID-19.

The spring break trip was her third time visiting the Gerace Research Centre on San Salvador, an island in the Bahamas. Her most recent trip had been to conduct research at the field station for her Brock Scholar and Environmental Science thesis.

As a spring 2020 graduate, spring was her last semester on campus. Soon after her return from San Salvador, campus transitioned to online learning.

“I didn’t really have a ‘goodbye’ whatsoever,” Jobe explained.

“Frustrating” is the word she used to describe the experience of switching to an online-only format for her upper-division lab courses in ornithology, ichthyology and cancer biology. Ask her about her spring break trip to the Gerace Research Centre—and the two subsequent trips during her undergraduate studies—and her eyes light up. 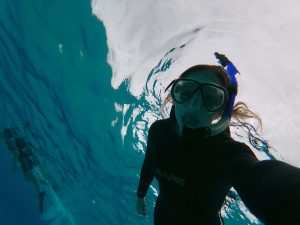 Jobe snorkels in the crystal-blue waters off the coast of San Salvador Island. Photo courtesy of Laurel Jobe

She first joined a group of Honors College students her sophomore year for a trip to the Gerace Research Centre when the group worked to update an outdated field guide about the pristine location. Although it’s undeveloped, the environment had changed some from weather events since the decades-old guide was created.

The pools of water that dot the island caught her attention, so she returned a second time, joined by two research assistants—one from UTC and another from a university in the Bahamas—to study the pools for her thesis.

“I’ve always been interested in marine and fresh water ecology,” she explained.

And that’s why she was planning to begin and had been accepted to a graduate program at the University of Miami in fall 2020.

“Was” is the keyword. When the University of Miami announced it was going online, she put those plans on hold.

“I made the decision to not go forward with graduate school for the fall because I didn’t feel like I would be able to get as much out of it with the nature of online courses, especially for a specialized master’s degree,” Jobe explained.

Instead of pursuing a dual-degree program for a Master’s of Professional Studies in Marine Biology and a law degree she’s pivoted. For now, she’s searching for entry-level science jobs across the country. But that doesn’t mean she’s lost sight of her dream for a career in environmental law.

A flexible mindset is something she emphasized when offering advice to incoming students.

“Keep your options open,” she said.

“Don’t go into your freshman year with a one-track mindset. The best thing you can do, even if you have a dream or goal, is to follow it, definitely. But if there are twists and turns and you don’t end up exactly where you thought you would, that is totally fine.” 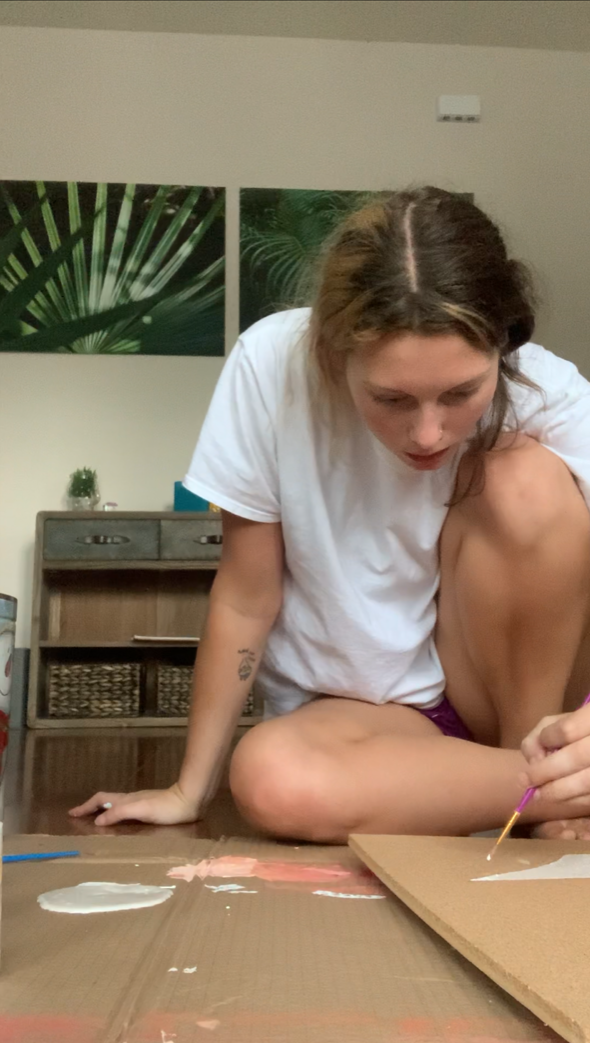 Recently, Jenelle Pierce has turned to painting and other creative hobbies as a way to de-stress. Photo submitted by Jenelle Pierce.

Now that she’s a graduate, Jenelle Pierce offered advice for freshmen as well.

“Start thinking about what you want to do, and not what you’re supposed to do,” said Pierce, an entrepreneurship major.

She came to UTC as a business major because everyone told her that was a good degree to have, but it wasn’t until her junior year that she started digging in to find what it was about business that she enjoyed.

During her final semester, she interned with the JumpFund, a women-led investment fund that provides growth capital to women-led ventures in the Southeast. Since graduating, she’s continued working part-time for the fund, assisting with an assortment of tasks, including managing social media and other communications and marketing projects. All the while she has been developing a passion for small businesses, especially the small-business community in Chattanooga.

“What you see with our entrepreneurial ecosystem is that every small business knows each other,” she said.

A native of Clarksville, Tennessee, Pierce graduated in May and compares that experience to an “identity crisis.” Until now, a huge part of who she is has been her identity as a student, she explained.

“Now I’m a real adult and I have to be me, and trying to figure that out on top of the whole world going through an identity crisis—we’re all feeling it. We’re all just trying to figure it out.”

Now that she’s no longer a student, Jobe has started painting and playing music, interests she set aside while in school. Her creative projects started out as a way to cope with the stress of graduating and starting a career, all intensified by COVID-19.

“For me, it is just something that I can do where I’m not checking my emails. I don’t have to be productive for any reason. I just like painting. It’s not for any one thing,” she explained.

“It’s just time I take for myself.”