‘Artists will always find a way’ 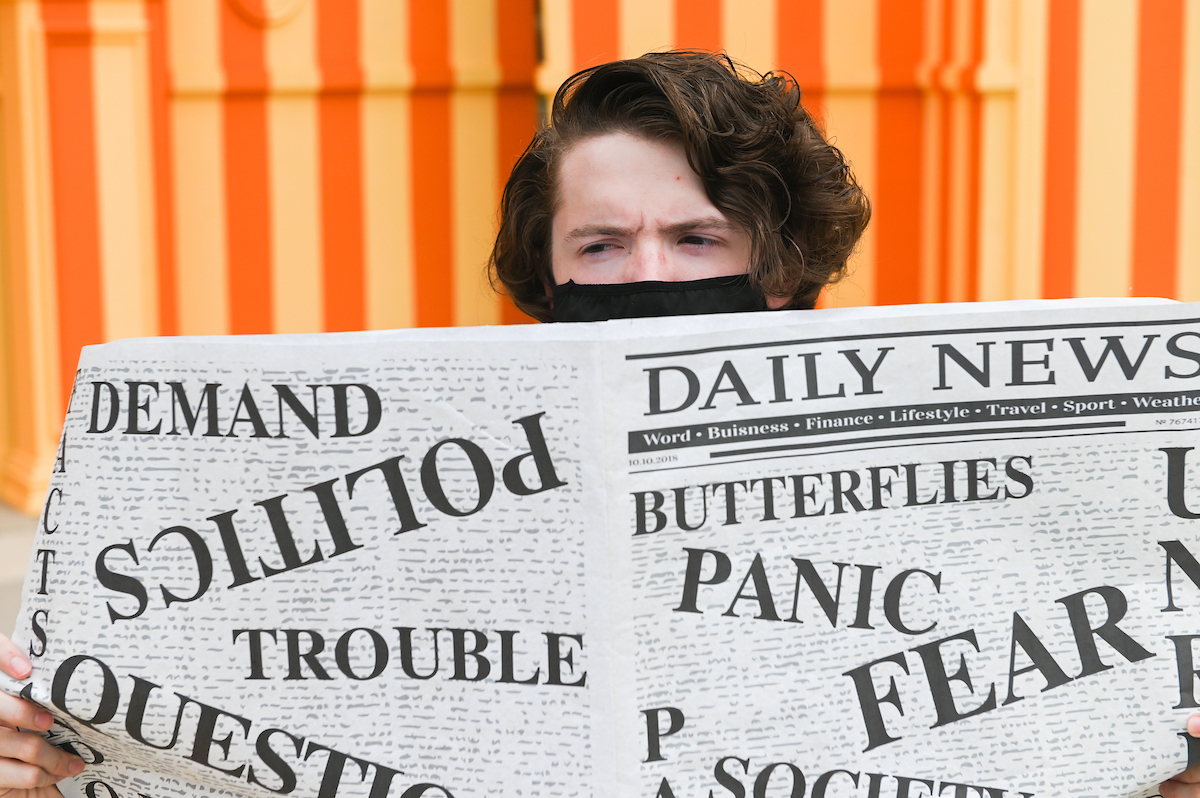 UTC Theatre Company’s next show is a 2020 take on the classic Greek play Antigone coming later this fall.

The show will be pre-recorded by actors in their homes and streamed like a Zoom meeting with everyone participating from their own virtual squares.

Members of UTC Theatre Company did not let Covid-19 stop them from producing their first show this season. Instead, they broke some theater rules, kept the ensemble(s) safe and learned a lot along the way.

On Sept. 19 and 20, the company performed The Bald Soprano, an absurdist satire that takes place in a middle-class English home.

“I’ve always found the absurdists—and the philosophers who kind of gave birth to them—I’ve found their work brutal but not hopeless,” explained Steve Ray, director and associate head of the Department of Performing Arts-Theatre Division.

“It’s like, there’s chaos in the world, how do we connect the dots? And I kind of felt like this year that’s where we were living and I wanted to give the students a chance to express that, to feel around in those areas of: What does it mean to live in an uncertain time?”

The company was resourceful, using many techniques to keep cast, crew and audience safe. All cast members wore masks throughout the play and maintained physical distance on stage. Because the cast was masked, their parts were voiced by actors who stood behind Plexiglas partitions. Just two actors—one male and one female—voiced all the parts.

The production took place outside on Chamberlain Field with a limited, socially distanced audience.

The show had two separate casts. If members of one cast had to go into quarantine or isolation, there was a whole other cast ready to fill their shoes. The members of the two casts had to stay away from one another and within their own cast bubble for the two-and-half weeks of rehearsal leading up to the show.

Everyone sanitized their rehearsal space before the next cast came in to rehearse. Luckily, both casts got to perform the production with a Saturday and a Sunday cast for the weekend of the show.

“From Day One we said, ‘You’ve got to wear your mask; you’ve got to stay six feet apart; and you‘ve got to disinfect things,’ and they have just been the model of responsibility.”

For sophomore theater major Sadie Collins that responsibility and the extra steps the cast took just became the “new normal.”

“It wasn’t as hard as I thought it was going to be,” she explained.

“It wasn’t a burden or a challenge necessarily, it was just the new normal. You know there’s a lot of responsibility. If one person in your cast gets COVID, you’re all out. We all trusted each other and knew that we weren’t going to be going out to parties or be irresponsible like that.”

Collins, female voice actor for The Bald Soprano’s Saturday cast, had never solely voice acted before. She also was performing parts in three distinct British accents with no prior accent training.

“My accent training consists of watching Harry Potter for my whole life. Before every line, I would have to switch into a different voice, a different accent that’s not my own native accent and make three different voices from them. Even knowing that I had that in my own arsenal, that I could pull that up, was a surprise for me.”

While voice acting was new territory for Collins, acting without dialogue was completely new for her castmates, too.

D’Andre Anderson, a senior majoring in theater, described his performance as Mr. Martin in the Saturday cast as something akin to human puppeteering.

“When I first started the rehearsal process, it was really hard. Because I realized I rely so much on the delivery of my voice and how I said the lines,” Anderson said.

But things got better. He, the other actors on stage and the voice actors grew in sync with one another and “felt each other’s energy,” he added.

“The voice actor was on his own wavelength; I was on my own wavelength but, for some weird reason, we were able to continue to fall in pattern with each other, and I thought that was so cool.”

Anderson described the production as “really innovative and creative.”

“It just showed that artists will always find a way to make it happen, no matter if we’re in the middle of a pandemic or not.” 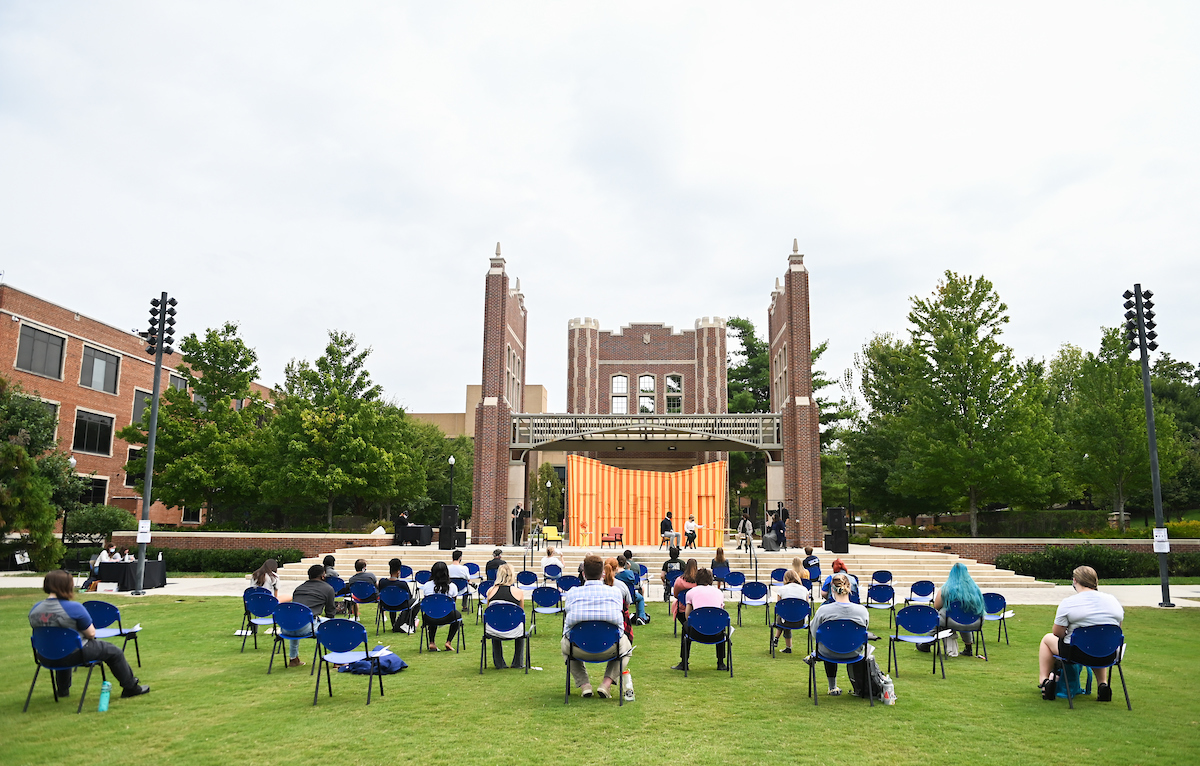 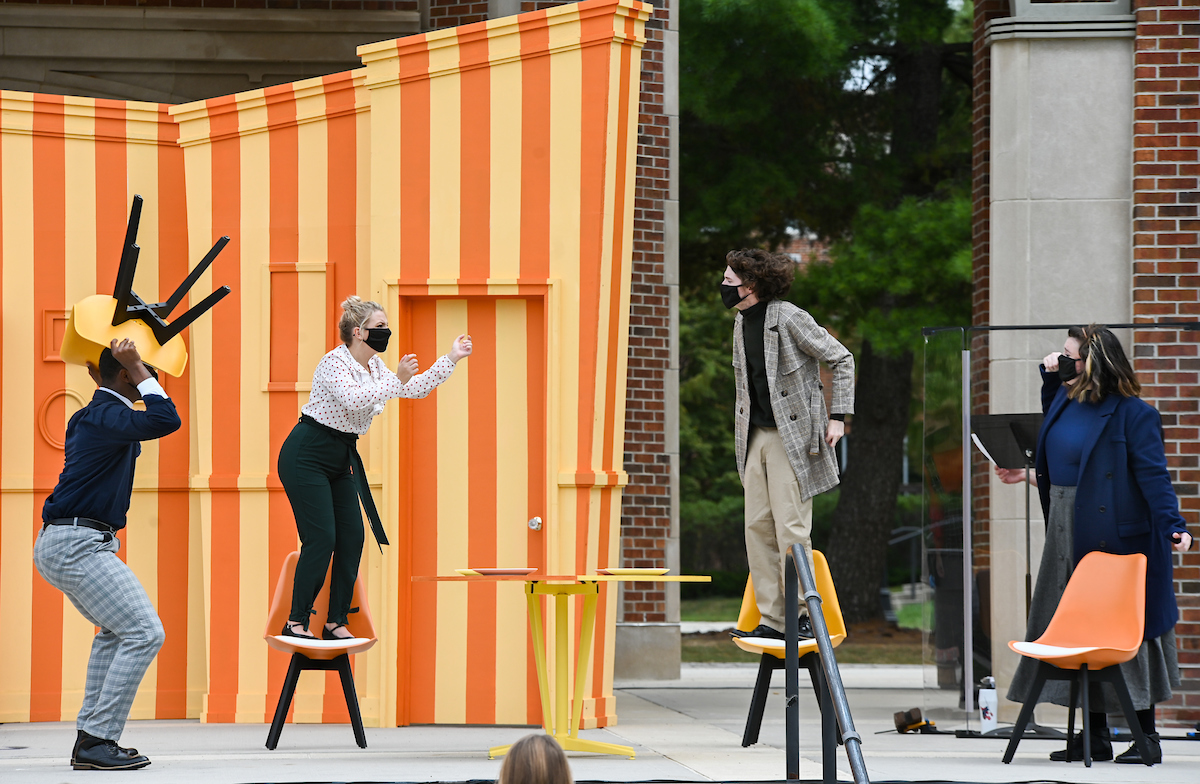 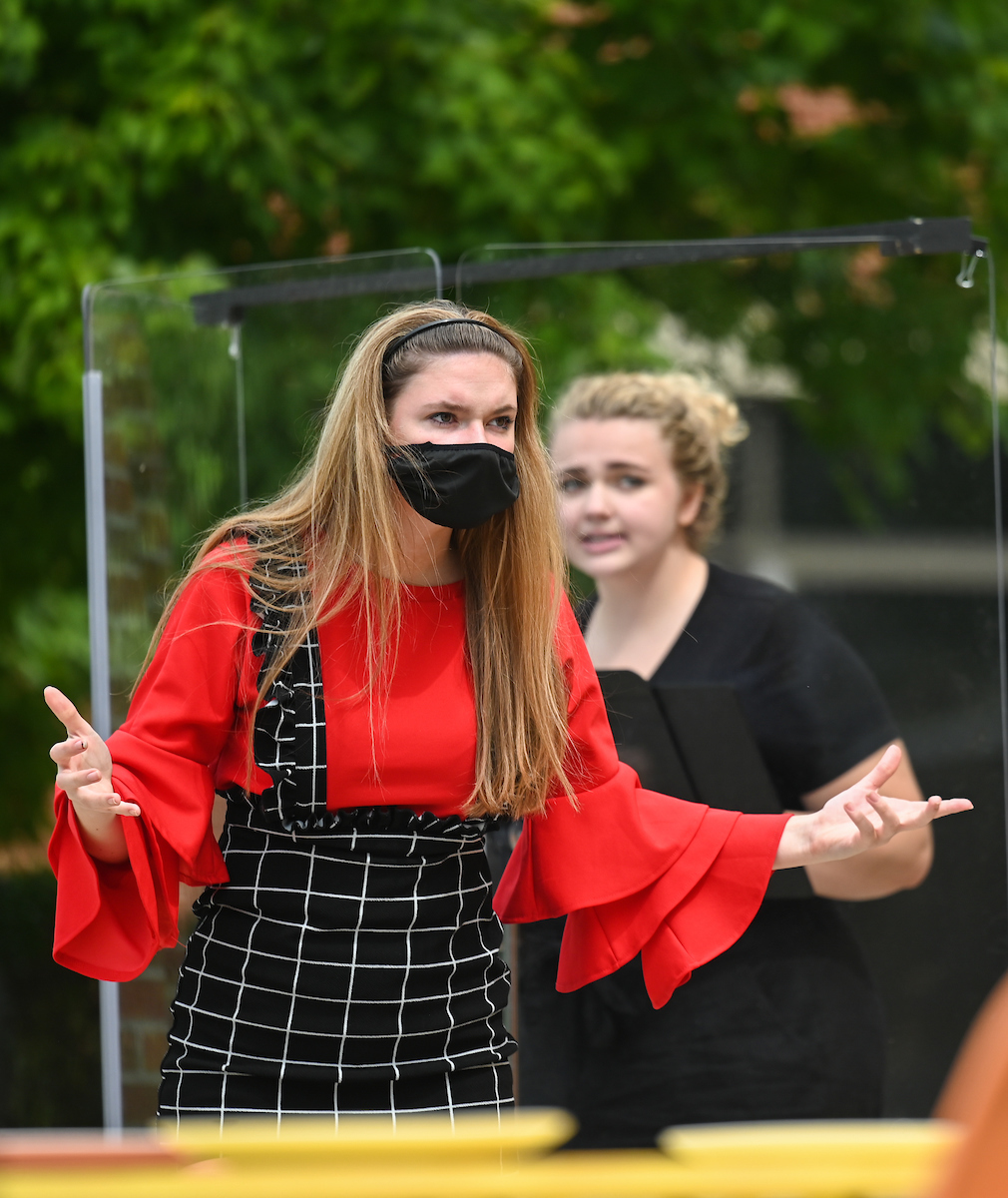 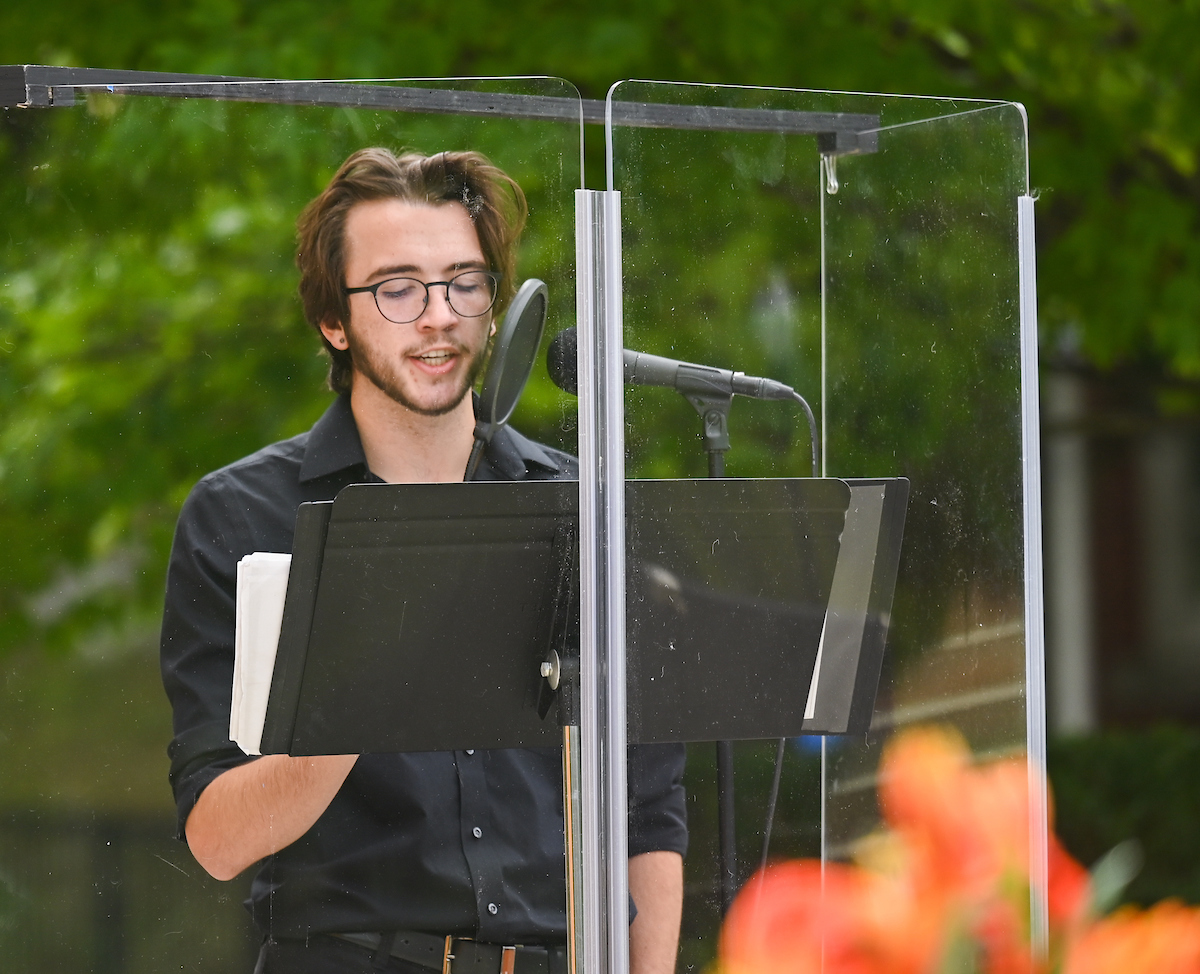 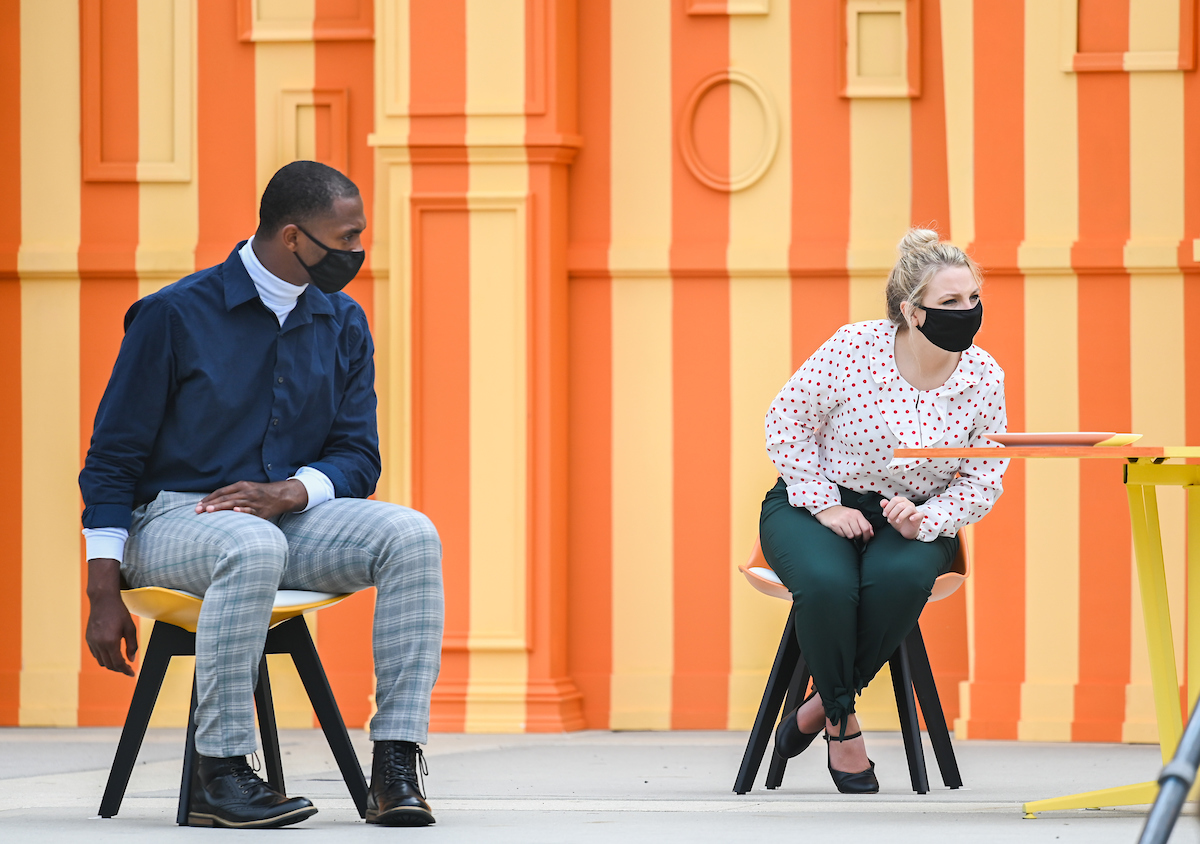