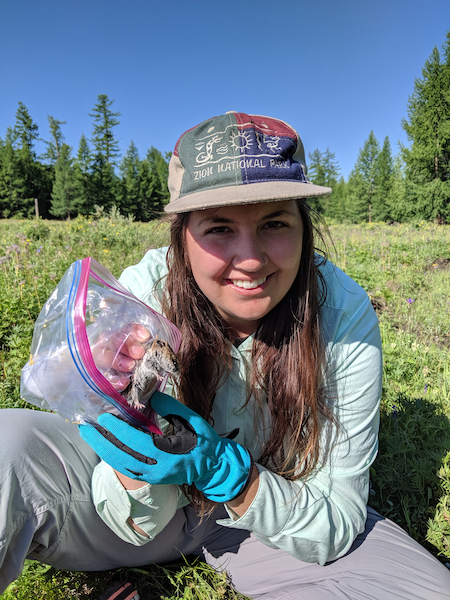 Chyanne Smith will use her grant money to study degus, small rodents that live in Chile.

Phone ringing or text dings! at that time of night usually conjure thoughts of: “Oh no, something’s terribly wrong.”

Not the case with Chyanne Smith.

Back in October, she had applied for a Graduate Research Fellowship Program grant (GFRP) from the National Science Foundation. The grant provides a graduate student $34,000 in research money and $12,000 for tuition and fees each year for three years.

It’s heady amount of money for any student, graduate or otherwise, and it’s hard to win, especially for someone attending a school the size of the University of Tennessee at Chattanooga.

Pursuing a master’s degree in environmental science, Smith was supposed to hear back in April on whether she was awarded the grant. But when the month rolled around, she hadn’t heard anything.

She headed downstairs in her Utah home to her computer and navigated to the grant’s home page. In the list of winners was her name.

“I woke my husband up. It’s two a.m. now and I told him I got it. He was kind of tired and didn’t realize until the next morning what was going on.”

A first-generation college student, she beat formidable odds to win the grant. According to an analysis by Science magazine, in 2019, 10 schools won 31 percent of the GFRP grants, and 14 percent of those went to the University of California Berkeley, the Massachusetts Institute of Technology and Stanford University.

“Most awards go to students in graduate programs at research-intensive institutions,” said Loren Hayes, associate professor in biology, geology and environmental science at UTC, who has worked with Smith over the past few months researching the lives of degus, small, guinea-pig-like rodents from Chile.

“Chyanne’s successful proposal indicates her exceptional critical thinking skills, ability to come up with exciting questions and potential to emerge as a leader in behavioral ecology.”

With her husband, Caleson, still living in their home in Utah, Smith moved to Chattanooga specifically to work Hayes. She and her husband agreed to have a long-distance marriage while she earned her master’s, she said.

“Although Chyanne could have used the award to go just about anywhere, she chose to come to UTC,” he said. “This speaks volumes about the quality of the environmental science program and opportunities for student research at UTC.

Her research proposal for the GRFP was developed under the supervision of Hayes and Carolyn Bauer, an assistant professor of biology at Swarthmore College in Pennsylvania, who also researches degus.

The original plan was to travel to Chile to study the animals in their only habitat, then share the information with other students from across the world. COVID-19 stepped in and prevented that. Now Smith plans to use abut 15 years of previously published data to research degus’ social organization habits and determine factors that might drive those instincts.

In general, Smith said, she “really enjoys rodents” and has traveled to Mongolia to research various species there. She understands that, when most people hear “rodents,” they tend to immediately picture rats and think “gross.” But mammals under 11 pounds make up 90 percent of the mammals on Earth, she explained, “and they’re really important to the ecosystem.”

“And I think they’re cute for some reason.”