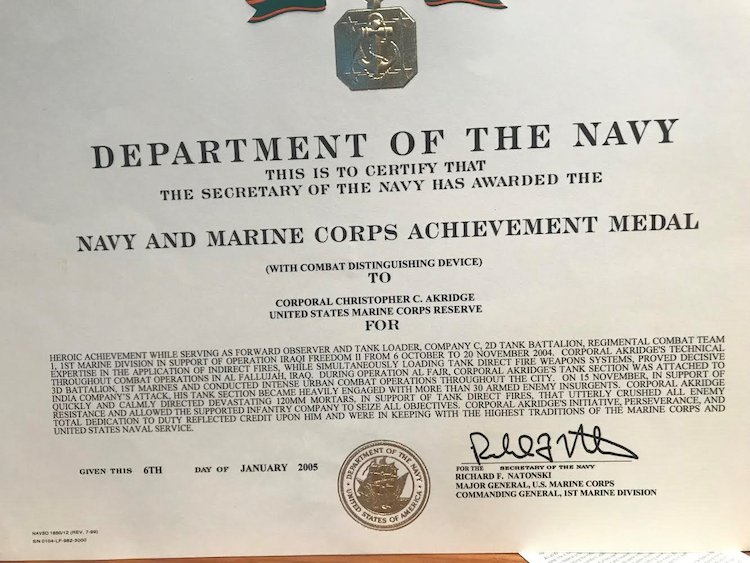 Ask Chris Akridge why he initially enlisted in the United States Marine Corps, and the answer is simple: “I wanted to serve my country.”

Ask Akridge why he now works with military veterans, and the answer is more complex.

“Some of my brothers came back and had very difficult times,” said Akridge, a licensed clinical social worker and 2006 graduate of the University of Tennessee at Chattanooga. “The military needs for our returning veterans are great, and I wanted to be in an opportunity where I could continue to serve them.

“Seeing the struggles and challenges that fellow veterans face, I’m always driven towards helping them work through that.”

As a member of the Chattanooga Vet Center’s readjustment counseling team, Akridge has returned to the UTC campus this semester to provide services to current student veterans, offering transition support through counseling, therapy and referrals. The role of readjustment is to understand and appreciate the military experiences veterans have faced while assisting them and their family members toward successful transitions back into their communities.

Having been in their shoes, Akridge can draw from his own experiences.

“We all, at one point, said, ‘We’re going to give our lives to protect our country and our brothers and sisters.’ And we know what it’s like to serve with people who have that same bond,” he said. “I will never completely understand what someone is going through, but I can identify strengths pretty well. It’s a good way to build a therapeutic relationship.”

Akridge knows first-hand about transitioning back into a campus environment after being in a combat zone.

Shortly after graduating from Red Bank High School in 1998, Akridge enlisted in the Marines. Following boot camp, combat training and specialized job training, he returned to Chattanooga that December as a reservist at the U.S. Naval and Marine Reserve Center on Amnicola Highway.

Entering the Marines as a reservist allowed him to balance military obligations and undergraduate studies, and he enrolled at UTC.

He recalled being on campus near the corner of Oak and Douglas streets on Sept. 11, 2001, when he first heard that two hijacked passenger airplanes were flown into the World Trade Center’s twin towers in New York City.

As a reservist, he was on call for nearly three years before his unit was mobilized for active duty. He served as a forward observer and tank loader during his seven-month deployment to Fallujah, Iraq, in 2004-05. As a result of his actions, he was awarded the Navy and Marine Corps Achievement Medal for heroic achievement during Operation Iraqi Freedom II.

Not long after seeing combat action and completing his enlistment, he returned to UTC to earn his bachelor’s degree in education. The readjustment to campus and civilian life came with rough patches.

“There is a lot of strength that you get from the military,” said Akridge, who attained the rank of sergeant. “Some of the strengths you already have because you’re willing to join the military. Then you come back (to civilian life), and you have to adjust your goals. You have to navigate things.

“Your sleep’s all whacked out and you have nightmares, and sometimes that makes concentration difficult.”

After a particularly rough spell, he spoke to a counselor at the UTC Vet Center.

“It was important to be able to talk to somebody who’s been there,” Akridge said. “He helped me realize that 1) I’m not crazy; 2) that we need help readjusting from war; and 3) he helped me navigate through and get the tools I needed to be successful. He helped me understand that there’s a strength that every veteran has that can meet the challenges that veterans face.”

It also put the wheels for Akridge’s future plans in motion. After a four-year stint as a teacher at The Howard School in Chattanooga, he returned to school and earned a master’s degree in social work from Kennesaw State University in 2012.

“I love being able to give back to the university that prepared me for my teaching career and everything else,” he said. “I’m very thankful for the opportunity to reach out to other veterans and go where they are when they go to school. That helps a lot.”

With Veterans Day on the horizon, Akridge has a simple reminder to honor those serving this country.

“Thank every vet you see,” he said, “and remember we still have a whole bunch of military over in harm’s way protecting us.”