Map stakes out regional areas needing the most environmental protection 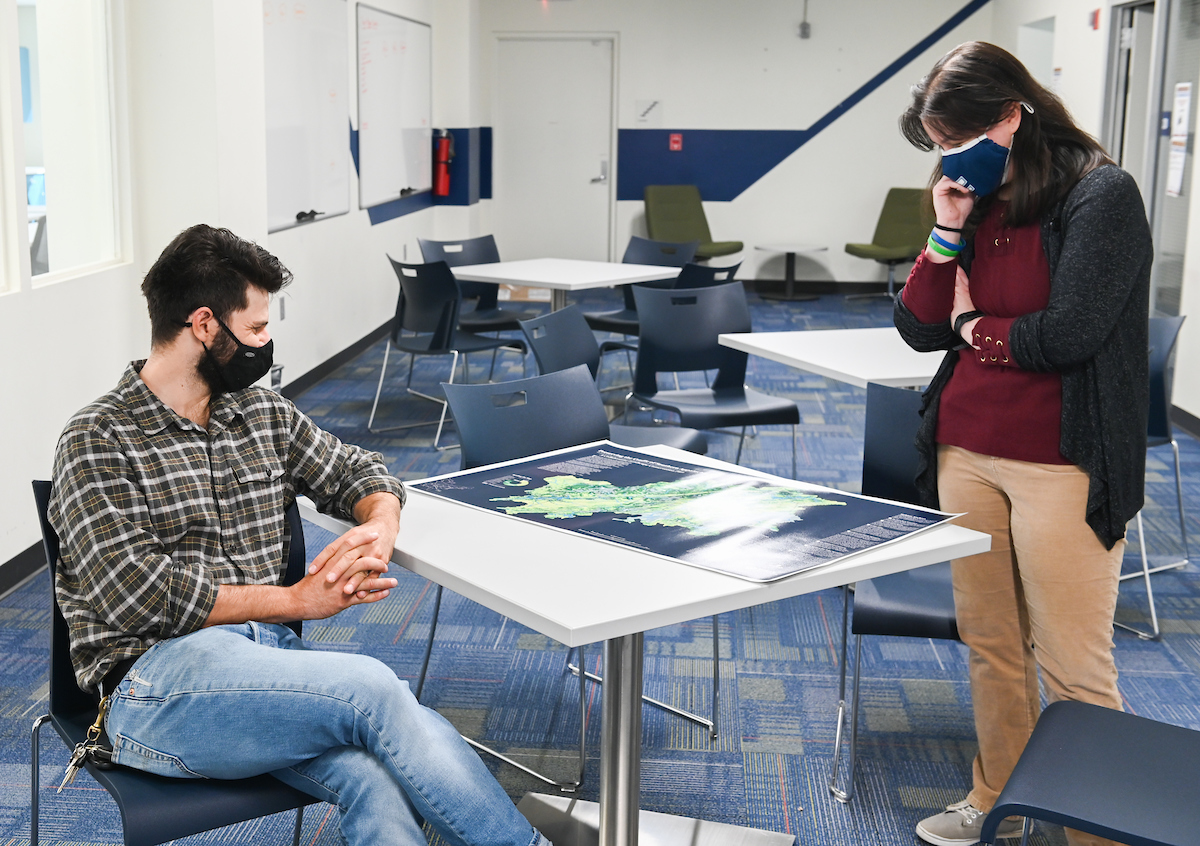 Charlie Mix and Nyssa Hunt looks at the map of Southern Appalachia they and others put together.

Based on their size and high-quality habitat, these are regional areas designated as critical to protect Southern Appalachia.

For a closer look at the map, go to: https://drive.google.com/file/d/1Rohdsrr3zlZhJdfijyBwTvQm11dW_oNT/view

The black bear lives in Northwest Alabama, but it’s hungry and food is getting kind of scarce, so it heads out.

Moseying along the Tennessee/Georgia state line, it eventually turns north, rambling to the southern end of the Blue Ridge Mountains. It hangs out there for a while, but the same lack of food begins, so it turns around and heads back the same way it came.

The bear’s trek was along what’s known as a “wildlife corridor,” a pathway for animals to travel from one location to another, even if the spots are hundreds of miles apart.

Such corridors also open a pathway for trees and other vegetation to expand into new territory, creating important connections between different locales. In doing so, corridors help maintain the biodiversity that stabilizes a region from an environmental standpoint.

Studying and pinpointing biodiverse areas and species, whether  mammals, fish, plants or insects, is what Charlie Mix and others from UTC spent the past three years doing.

Their work resulted in an award-winning map that intricately plots areas across Southeast Tennessee, North Georgia and Northwest Alabama, identifying those with the most and safest biodiversity down to the ones that need more protection by federal, state governments and conservancy groups.

“We want to protect wildlife habitat, and we want to conserve what’s not already conserved to protect our species with the greatest conservation need,” he said.

The map recently won both the Best Map Overall and the Best Static Map by the Tennessee GIS council, a clearinghouse connecting GIS projects across the state.

“This is a straight-up gorgeous map, and I don’t even know where to start. The more I look at it, the more things I like, and I could talk about this all day,” said John Nelson, a cartographer from Michigan, said at the Esri International GIS Users Conference.

The map was created through a partnership between the IGT Lab at UTC and the local chapter of the Thrive Regional Partnership, a group of conservation, recreation and land management agencies. Titled “Preserving the Cradle of Southern Appalachia,” the map is part of an ultimate goal to preserve about 50% of local biodiverse habitats by 2055.

Using data previously collected by federal, state and local conservation groups, the UTC team created a scale in which the highest-rated are areas where biodiversity is most likely to remain safe from deterioration to areas that, while not destroyed, need significant help to maintain their environmental solidity.

Their work also included preserving land for farming, often considered a hindrance to conservation efforts. But farmlands must be seen as part of the environmental makeup when taking a deep dive into the needs of an entire region, Mix said.

“From species conservation to building trails to working with landowners to protect farmland, it’s all about conserving the landscape.”

Before the map’s research began, Thrive created a committee with the lab and Natural Treasures Alliance to develop strategies to achieve those goals, said Thrive Director of Communications Rhett Bentley.

“Our research partners at UTC’s IGTLab were instrumental in this process,” she said.

She described IGTLab as “an incredibly valuable research partner” with Thrive and the alliance.

“By working together and tracking progress with our research partners at the IGTLab, we can see collective impact in protecting beautiful landscapes across the region,” she said.