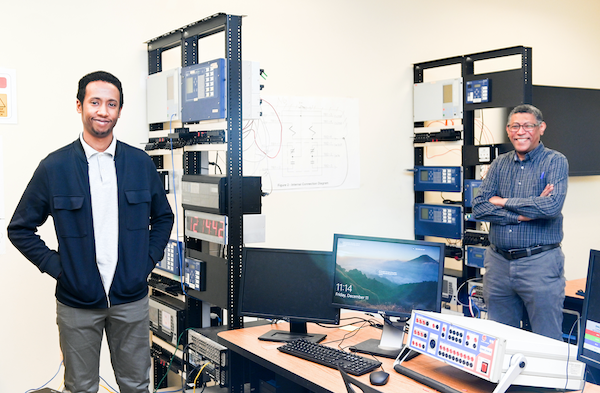 To read the research paper, go to:
https://bit.ly/3siO5Qq

Then nine months of writing, reviewing and rewriting a research paper on techniques for testing electrical power networks, getting the paper ready for publication.

Three weeks after publication in a major scholarly journal, an email arrives from the worldwide expert on the research subject, saying he’d like to test the equations in his own work.

“He’s a well-known guy. He’s actually one of the guys we cited most in the paper because most of the work is his intellectual property,” said Abdelrahman Karrar, interim head of the Department of Electrical Engineering at the University of Tennessee at Chattanooga. Karrar worked with three graduate students to conduct the research, including Babikir Mohamed Ahmed, who’s pursuing a master’s in electrical engineering.

The world-renown expert is Christian Dufour, senior simulation specialist in power systems and motor drives at Opal-RT, a Canada-based, global developer of power grids and electronics for various industries, including autos, trains and aircraft.

“He said that he read the paper with great interest and would we be interested in him adopting the method to run some demos,” said Karrar, who does not know Dufour personally nor ever talked to him, either in person or through email.

Of course, the answer to Dufour’s request was something along the lines of—pause for moment of brain freeze—“Uh, sure.”

Using only mathematical equations, Karrar and Ahmed and  graduate students Amira Abdelgadir and Noman A. Saied researched and wrote the paper on decoupling, a process that keeps electrical distribution networks working smoothly. Despite the worldwide use of decoupling, it has limitations, Karrar explained, and his and Ahmed’s research suggests ways to get around some of the limitations.

It was not always a smooth, Step One, Step Two, Step Three process.

“It can be a bit frustrating for a brief amount of time when it doesn’t work out as planned, but we always circle back to find what we did wrong and then go forward in the right direction,” Ahmed said.

Dufour says Karrar’s and Ahmed’s ideas may make it possible for Opal-RT computer simulators to test large electrical distribution grids at the same speed the grids will use when put into real-world operations. Lab testing power grids of this size “is especially challenging,” Dufour said.

“Engineers will use the simulator to find issues in the lab before commissioning to avoid the high costs of correcting problems in the field after deployment,” he explained.

“It feels good. When we started on this, we were just trying to fix a small issue and now we ended up with this work. I never thought at the beginning it can go this far,” said Ahmed, who came to UTC after studying at the University of Khartoum in his home country of Sudan, the home country of Karrar, and the university where he previously taught.

While research beginnings started in the summer of 2019, Ahmed had an internship in the power generation department at local engineering firm Mesa Associates, Inc. and Karrar had his job, so they met only every few weeks, Ahmed said. Crunching numbers didn’t truly crank up until December.

“We got together every day for about three weeks and we finished the work,” Ahmed said. “It was during the Christmas break, and that was when we could really focus.”

Karrar notes that, to do the work, vacations over the break were out of the question. Ahmed was planning to go back to Sudan for a few weeks, but that didn’t happen, and Karrar’s holiday plans also went by the wayside.

“We came here every day and that really worked because we got the breakthrough during that period,” Karrar said. “We sacrificed our vacation.”