Joseph Ellison blends love of theatre with love of teaching 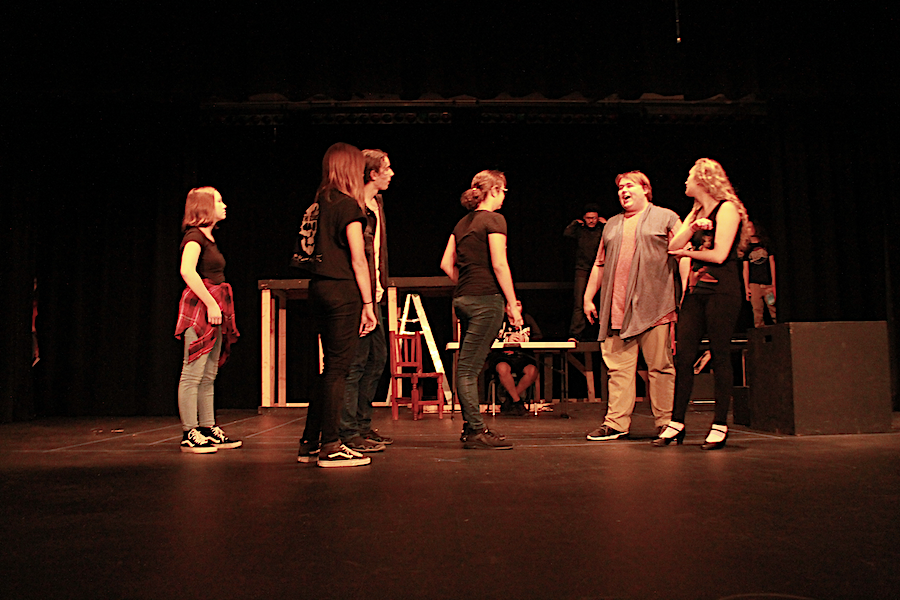 Joseph Ellison, who seems to be singing on the far right, leads his theatre students in an Arizona high school.

There wasn’t much theatre going on at Joseph Ellison’s high school in Harrogate County, located on the Tennessee/Kentucky state line. In fact, there really wasn’t a theatre program at all.

A Theatre Arts class was added in his senior year, but it focused a lot on film, he said, and he was more interested in the stage. Driven by a desire to be involved in the theatre but an equally strong desire to teach, he combined his two loves when he enrolled in the University of Tennessee at Chattanooga as theatre major with a minor in education. After graduating in 2017, he was immediately hired as the director of theatre/performing arts at Rio Rico High School, located about 20 minutes from the Mexican border in Arizona.

“I have wanted to be a teacher since kindergarten,” Ellison said. “Growing up, I always knew I would want to work in an area where I could help people grow and learn. Every chance I got I would tutor, be a camp counselor or just volunteer with projects that dealt with middle and elementary students. I’ve always wanted to give people a chance to have something in their life of value and, in education, I thought it would be the best venue. Helping students find love in their learning is the greatest thing I could want.”

His blend of teaching and theatre resulted in Ellison being named as the 2020 Arizona Thespian Teacher of the Year for the state’s South region. For the award, the state is divided into regions based on the four compass points.

“This award is given annually to a teacher that demonstrates exceptional courage and devotion to the Performing Arts program at a school. It is a prestigious honor that recognizes the best of the best within our ranks,” Steve Abaroa of the Arizona Thespians Executive Board said in an email to Ellison.

Ellison said the award reflects not only his work but the efforts of his students.

“I owe so much to my students, and this award is a reflection of their hard work just as much as mine,” he said. “I came in with a very strong and realistic vision of what I wanted in a program, and I made it happen through determination and pushing a program that worked for everyone and not just a select few. I learned that when students are given the chance to not just create but to also design and lead, they, too, become invested.”

Those who worked with Ellison at UTC say they had no doubt he would succeed as a teacher.

“Joseph Ellison was born to be an educator,” said Laurie Allen, Lyndhurst Chair of Excellence in Arts Education and executive director of the Arts-Based Collaborative. “He knew from Day One at UTC that he wanted to teach theatre, and I was always impressed by his initiative and passion to ensure all students have access to theatre in their schools.

“Not only did he perform well, but his efforts created pathways for future students pursuing theatre education at UTC,” she said. “Rarely does any theatre education student graduate without his hearing his name and knowing the legacy he has left behind.”

As director of Rio Rico’s Hawk Theatre Company, Ellison has led students to tackle such impressive works as Oscar Wilde’s “The Importance of Being Earnest,” a musical version of Mel Brooks’ “Young Frankenstein” and the Thornton Wilder classic “Our Town.” He focuses on a wide array of theatre elements in his class, he said, including college-level concepts such as stage management, acting, directing and performance production.

“It’s like taking a minor in theatre,” he explained. “They learn history, concepts, theories, how to read and interpret different genres, directing, costumes, hair/makeup, light, sound, projection, publicity, scenic. The list goes on,” he said. “If you don’t tell the students they’re working at a college-level, then they’ll just see it as on grade-level because instruction is instruction.”

While living in desert-dominated Arizona is certainly different than living in Tennessee—“the changing of the seasons is what I miss the most,” he said—the work as a teacher is the same as anywhere else, he said.

“Building community, establishing bonds, setting expectations, explaining each thing, making assignments and tasks meaningful and meeting students with their voices and ideas is what makes me as an educator grow,” he said. “When you reach the hearts of the students, everything else falls into place. Some days are still rough, but the good times greatly outweigh the hard ones.

His advice to new teachers, wherever they are, is fairly simple: Don’t isolate yourself, whether at school or where you live.

“Try to become part of the community where your school is so you can walk the shoes of your students and their parents. Be warned that, when you start finding your place in the community, you might as well start looking for a good welcome mat that says “Home.”