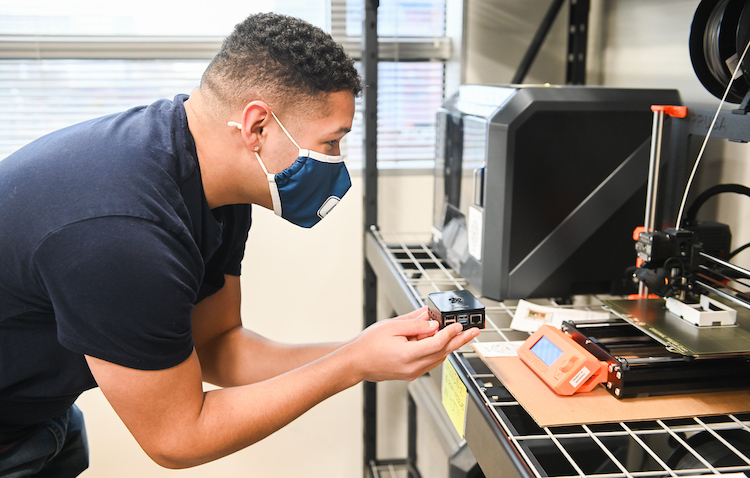 Adolfo Villalona, a student in Chang Phuong’s cybersecurity class, works with a 3D printer to build a device to recognize fingerprints.

McKenzie Mack enrolled at the University of Tennessee at Chattanooga to pursue a graphic design degree. She’s graduating with a degree in cybersecurity.

Nothing at all against graphic design, she quickly said, but the digital world grabbed her attention, and she switched majors in her freshman year.

“It’s an emerging field with a lot of jobs in it. There’s a lot of different niches that you can get into,” said Mack, who plans to graduate in December.

In late 2020, news of the Russian-linked “SolarWinds” hack of 18,000 private and U.S. government computers brought a deluge of attention to cybersecurity and its importance. But the field has been vital and vibrant for decades, ever since computers became a near-indispensable part of daily life.

“Within the computer science department, we’re trying to train the students so they’re able to apply the skill sets for security at a company, something that is core technology,” said Chang Phuong, a lecturer in Computer Science and Engineering at UTC.

On this particular day, Mack and three other cybersecurity students are working on a semester-long project in Phuong’s Biometrics and Cryptography class. Students form teams to design a case about the size of a pack of cigarettes that will hold tiny computer parts—including a fully operational computer and a camera—to read fingerprints, a security measure known as biometrics.

As she talks, a 3D printer behind her is zzzz’ing back and forth, building the case she and her team designed.

Biometrics is the use of technology to confirm identity through a human biological characteristic unique to every individual such as fingerprints, facial or voice recognition or retinal scans, an approach experts consider far more secure than passwords.

“If it’s something with a biometric device component, then it’s going to make it a bit more difficult for somebody to steal that from you to be able to use it for access,” Chang said.

But hackers are still trying.

“The hackers really stay on top of things, but it just makes me more excited,” said Adolfo Villalona, a senior who graduates in May with a double major in service security and computer engineering.

“Biometrics is definitely the future, so the passwords are going to be obsolete.”

Even with biometrics making hacking harder, those known as black-hats in the industry still try to find weaknesses in computer systems, so they can get inside and create chaos or steal valuable information, Chang said.

“There are people that try to fake biometrics, like creating a fake fingerprint,” he said.

On the other side of the keyboard, white-hats are cybersecurity experts trying to prevent hacking by locating weaknesses first and putting up defenses.

Cybersecurity isn’t contained just to keeping outside hackers from getting inside, Mack said. Some hackers already are inside, and companies need to make sure employees are not trying to steal secrets or abusing the company’s computer systems in other ways. Sometimes illegal or unethical ways.

“Let’s say somebody in the company has inappropriate use in the email system. I would look at the email servers and its email logs to build a case for the company in the event they go to court.”