Professor in the College of Engineering and Computer Science recognized nationally

by UTC Communications and Marketing May 25, 2021 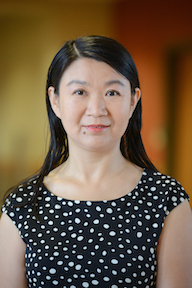 Li Yang, a professor in the College of Engineering and Computer Science, has been selected tor receive a prestigious award from the National Science Foundation.

A Guerry professor, she was selected for the 2021 Director’s Award for Superior Accomplishment in National Spectrum Collaboration Group (NSCG). The award recognizes outstanding accomplishment and strategic collaboration in the research and use of radio waves, which are  widely used in many technologies, including telecommunications.

“I am honored to work with dedicated colleagues on this important initiative and be selected for the Director’s Award for Superior Accomplishment,” Yang said.

Yang’s research in cybersecurity, computer science, artificial intelligence and Science, Technology, Engineering and Mathematics (STEM) education has attracted more than $4 million funding to UTC from the National Science Foundation, the National Security Agency, the U.S. Department of Defense and other agencies over the years.

She contributes to the NSF’s efforts and initiatives to advance the nation’s Artificial Intelligence (AI) research and development to create new sectors of the economy and revitalize industries. The National Artificial Intelligence Research Institute’s program is a joint effort between various industries and the NSF, the Science and Technology Directorate and the U.S. Departments of Agriculture, Homeland Security and Transportation.

She also manages the NSF Future of Work at the Human-Technology Frontier program, which supports research to sustain economic competitiveness, promote worker well-being and the pursuit of lifelong learning and quality of life.

In 2019, she was chosen as a Program Director for NSF’s Division of Graduate Education. In the role, she is responsible for programs that manage STEM proposals and awards in areas of cybersecurity artificial intelligence, future of the work, computer science, cyber-infrastructure and education research.