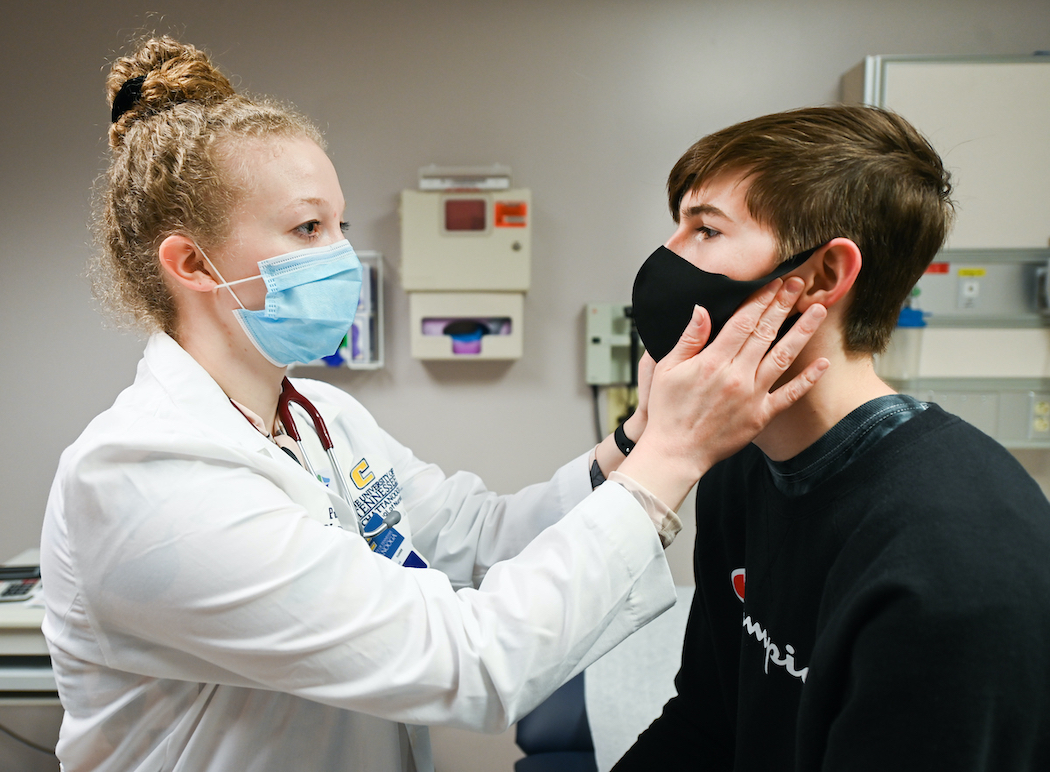 Amber Roaché was asked to describe Taylor, the patient being examined behind the glass window.

Roaché, the nurse practitioner program coordinator for the University of Tennessee at Chattanooga School of Nursing, explained that Taylor is a 17-year-old with a history of asthma that has become increasingly troublesome. The teenager is presenting with a cough and heightened shortness of breath. A whole line of questioning by students aims to figure out the triggers behind Taylor’s latest issue.

And then Roaché talked about the great work of all four Taylors.

That’s correct. A Taylor is sitting on each of four examination tables in the School of Nursing’s safe hospital. Each Taylor is a UTC undergraduate theater major participating in a simulation collaboration with students in the nurse practitioner program.

Simulations with theater students have happened at the School of Nursing throughout the year.

“One of the biggest changes we’ve made to our graduate program is having the simulated patient actors come in and portray real patients for our students,” Roaché said. “They are able to get the hands-on training and do everything they need to do with a patient in a safe, controlled environment, and we can provide feedback immediately so they know what they’re doing well or where they may need some improvement.

“It has been such an amazing partnership that we have developed with the Theatre Program and the Arts-Based Collaborative.”

Seeds for the partnership were planted a couple of years ago after a difficult conversation with one of her long-time patients about a diagnosis, Roaché said. A nursing student in the room was asked to leave.

“I realized after we got out that it was such a disservice to the student,” she recalled. “At that point, until they get into practice, they weren’t getting the experience having some of these difficult conversations with patients or experiencing some of these things. Not too long after that, I was introduced to Laurie Allen.”

Allen, now the Lyndhurst Chair of Excellence in Arts Education and executive director of the Arts-Based Collaborative at UTC, has a background in applied theater.

“We started talking about simulated patient actors and using real people to do some of these same scenarios,” Roaché said, “and Laurie and I have been working together since then. This partnership has become hugely important for our students.”

Combining healthcare and theater might seem odd until “you get into it and you start seeing how theater and some improv really plays well into being a simulated patient actor, the students really get into it,” Roaché said.

Allen jumped at the chance to have theater students learn by benefiting other fields and disciplines. She has also used community actors in collaborations, saying she is always looking for ways to use theater for nontraditional purposes.

“Roleplay is something that helps a lot of professions helping to contextualize experience and prepare,” she said. “Along with that, there is the opportunity for students in theater to understand career pathways that may not be visible to them yet. Seeing how their craft can be utilized in different ways beyond just performing a role in a play is huge.

“For the performer, they’re utilizing so many of their skills: Improvisation, thinking on their feet, responding in the moment, being true to their character.”

On this day, the four participating theater majors—junior Callie Downing, sophomore Logan Lynn and freshmen Jaden Partain and Maegan Whitlock—are provided material to portray Taylor. Once the closed-door, one-on-one with the nurse practitioner starts, they need to be as realistic as possible.

“What they get is a packet with background information, and they do have preset responses to some questions like, ‘Do you have any issues with shortness of breath?’” Allen explained. “That’s an important one that they answer specifically because of the case for today. They do have some stuff that they can pull from the backstory, but they can also make it up if it’s not a full, lengthy story.

“Authenticity is still really important because it has to be as real-world as possible to make this a rich learning experience for the nurse practitioner students but the theater students as well.”

Downing said she just put all the information in her brain and stepped into character once she stepped into that room.

“This was the most quote-unquote real thing I’ve done with acting before because you do have to think quickly on your feet,” she said.

Each actor went through four or five rounds of playing Taylor, with examinations taking approximately 20 minutes. Faculty, including Roaché and Allen, observed from behind a glass window.

Chanda Okyere, who is midway through the nurse practitioner program, was pleased with the simulation. She worked directly with Whitlock.

“She was thinking through what you were asking her,” said Okyere. “As I was doing the simulation, it helped me to get a realistic flow of everything. It was good to work with an actual person versus using a mannequin because the responses were real.

“Not knowing what the next answer is going to be, in my head I’m running a couple of different scenarios. Based on what she tells me, I can move on. Anything I asked, she answered right away. And she was very believable, so I didn’t feel like it was an actor. I felt like I had a real patient.”

Allen said the plan is for future theater/nursing collaborations to be available for all UTC students.  A process is in place to add applied theater as a performing arts general education course.

Tagged with: Arts-Based Collaborative Department of Theatre School of Nursing