While enjoying the music, Myers watched an older black woman and an older white man get up in front of the crowd and start dancing.

“It was like they were the only two people there,” said Myers, a marketing major who recently completed her junior year at the University of Tennessee at Chattanooga. “They were just so in love with each other, and it made such an impression on me.”

When an open call went out to local artists in July 2020 to submit bids for a community mural project to be painted along the EPB substation walls on East 10th Street, Myers jumped at the opportunity. She wanted to turn that lasting impression into “Interracial Couple Dancing,” a memory she could share with others.

The mural competition, hosted by EPB and other local project partners, asked for vision statements and sample images and required that artists lived or worked in the EPB service territory. The central theme for the collaboration, “The Soul of MLK—How Artists Visualize the Heartbeat and Soul of MLK in Arts, Music and Culture,” was designed to highlight the history, heritage and significance of the MLK area.

“I thought that ‘Interracial Couple Dancing’ would really represent the soul of MLK,” Myers said. “I wanted them to represent the love that they were sharing with each other and with everybody else.

“I didn’t want to paint the couple in explicit black and white skin tones. There are waves of pink and multiple blues and purples throughout their skin tones to represent that people are more than just their skin tone. They have a creative spirit and they’re full of love. I wanted that to be the message I’m sharing with the community.”

Myers had been involved with a mural before, putting paint to the walls in the Gary W. Rollins College of Business’ temporary Davenport Hall headquarters during the 2019-2020 academic year. But the EPB mural was different. Instead of her work being seen in a limited space, she could showcase her work out in the city.

During April and May, each of the 12-foot-high by 17-foot-wide mural panels came to life with Myers and the other artists replacing gray walls with vibrant colors.

“This has been such a great experience seeing our individual pieces go together,” Myers said. “It’s been exciting to get to talk to the other people and get to hear their inspiration behind the mural design.

“What’s cool about this project is that it’s not just one artist; it’s nine different artists who get to share what ‘The Soul of MLK’ means to them.”

Here is a look at the other murals created by members of the UTC family.

Josiah Golson has returned to UTC as an adjunct instructor in the Honors College’s Innovation Lab. A 2008 graduate of the University with a bachelor’s degree in communication, Golson later earned a Juris Doctor degree from the University of Texas School of Law.

Golson is the founder of the Chattanooga-based 800 Collective, a diverse group of artists using art as a means of civic engagement and public discourse. His mural is called “Head in the Clouds of History.”

“When I was a UTC student, I remember walking up and down these streets. I didn’t have a car until I was a junior, so I would walk from the campus to downtown, maybe grab a bite or go to a movie or something, and always imagine these spaces being activated. So this was inspired by a style of work that I did a few years back in that you can tell what’s going on in a person’s head by the illustration of what’s happening in their hair.

“I love creating art that can speak to a sense of place and the energy of a place—and emphasizing story. Anything that allows me to be a part of storytelling is wonderful. This is a young woman who could represent a student at UTC or someone coming of age, and she will have this dream-like expression on her face. In her hair, there are images of people dancing, musicians, people engaged in civic engagement—basically to reflect the history of what’s happened on 9th Street and MLK. It’s a lively culture and how she’s an heir to the type of history that belongs to her and the people in this area. And she takes ownership of it.”

Keelah Jackson-Harris is co-founder of the Keeody Art Gallery, located one-half mile from the mural site on MLK Boulevard, and an artist-in-residence at The Baylor School. She received a bachelor’s degree in political science from UTC in 2001 and a master’s in education from UT Knoxville in 2006.

“With this mural, it was very important for me to preserve the legacy of this area. I know that as we have viewed the various aesthetic changes, I want to make sure that the rich legacy of the black community is commemorated. And so I made sure to include entertainers from the various eras and business owners to show that there are roots in this area. Husbands and wives have businesses—such as myself and my husband, we have Keeody Gallery—and Clyde Stubblefield came from this area. And of course, Bessie Smith; she was very prominent in the 9th Street district, in the circuit, back in her time. I want the beauty of every important factor of 9th Street to be highlighted within my piece.

“So the funny thing is, I’m teaching two eighth-grade classes about street art, or art from the streets. I’ve been recording every step of the process, using it as part of my lesson plans and curriculum. I think that it will be exciting for them to see the final product. I’ve tried to incorporate them in this so that they will understand that not only am I a part of history in being a black female muralist in this project, but they’re part of history, too. They have learned along with me on this project. They have told me that this has been an exciting experience for them because it’s living art and it’s a living lesson.”

Rachel Veal is an adjunct art professor at UTC, and her professional experience includes working for Chattanooga’s Hunter Museum of American Art. She received a bachelor’s degree in education from Mercer University and a Master of Fine Arts degree from the Academy of Art University in San Francisco.

“Street Music” is the title of her first solo outdoor mural.

“It usually takes a while to mull things over when I’m given a theme because I don’t want it to be contrived, so I’ll do something to get my mind in a mode where I can be inspired and creative. I had a vision of musicians because music as an art form is something that brings people together.

“Music is a very integral part of my life. Knowing the theme was sort of encompassing MLK Boulevard, the more I talked to people—and specifically, people who lived in this area who have watched the city grow and change—music seemed to be something common in everyone’s memory. And I see Martin Luther King Jr.’s message as bringing people together and doing it in a peaceful way.

“The rainbow background represents the idea that everything we see, whatever color it is—whether it’s the array of beautiful flowers in the fields or the foods that we eat or the clothes we wear or even the people that we pass and are friends with and live among—they come from the rainbow.” 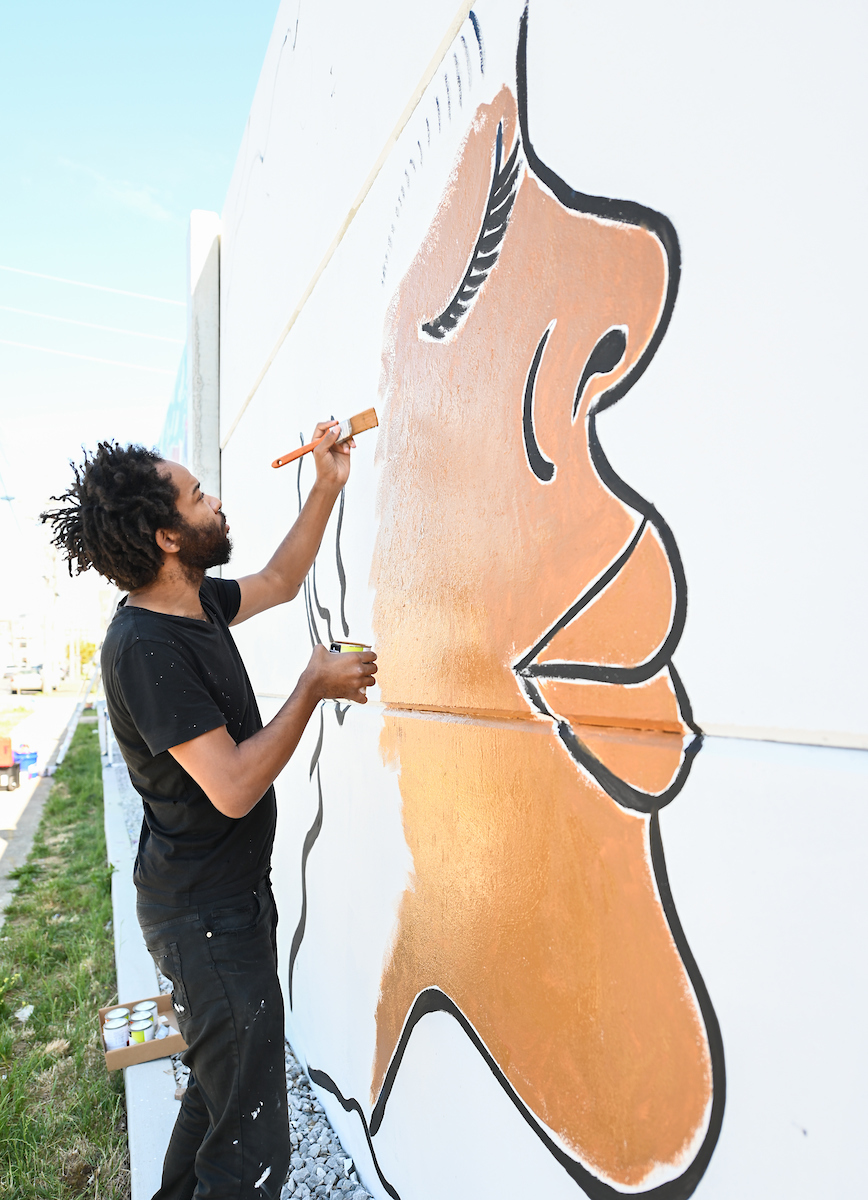 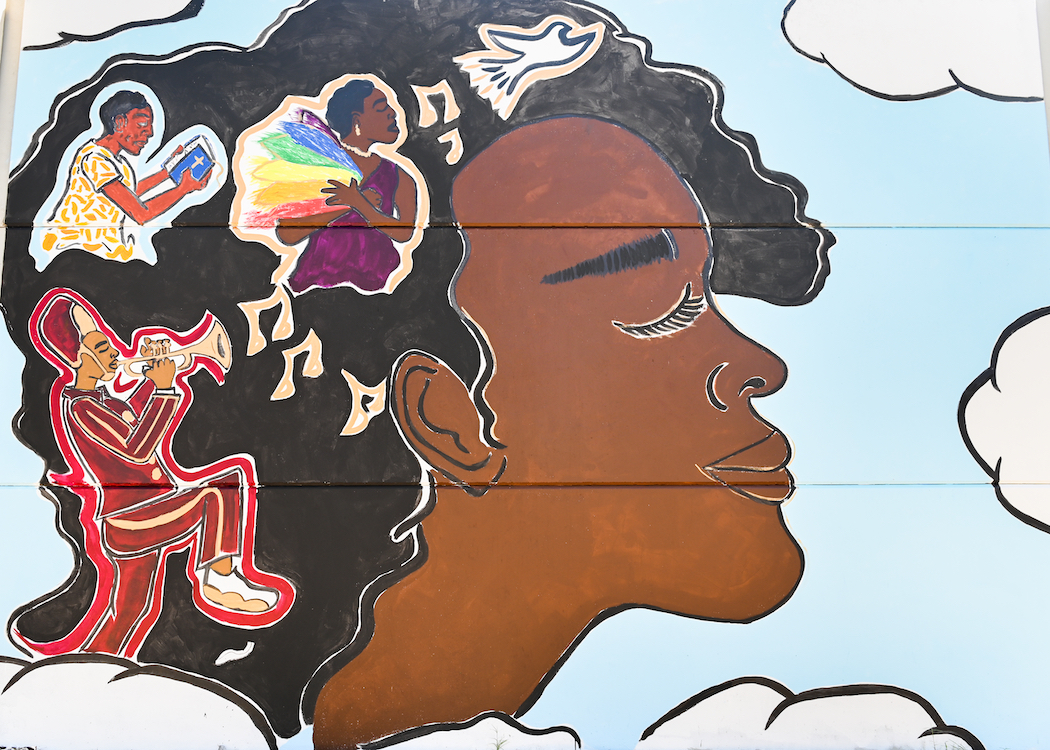 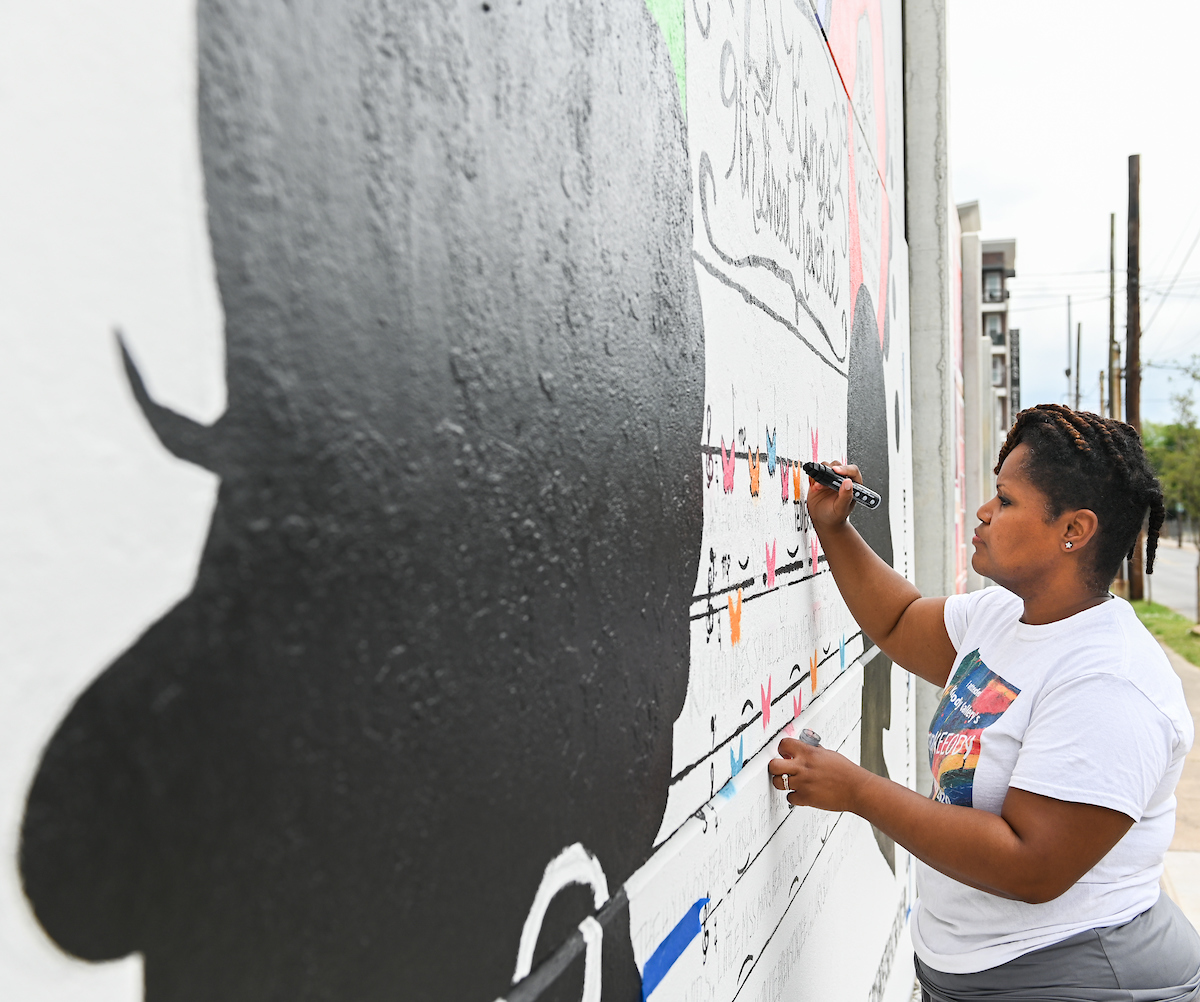 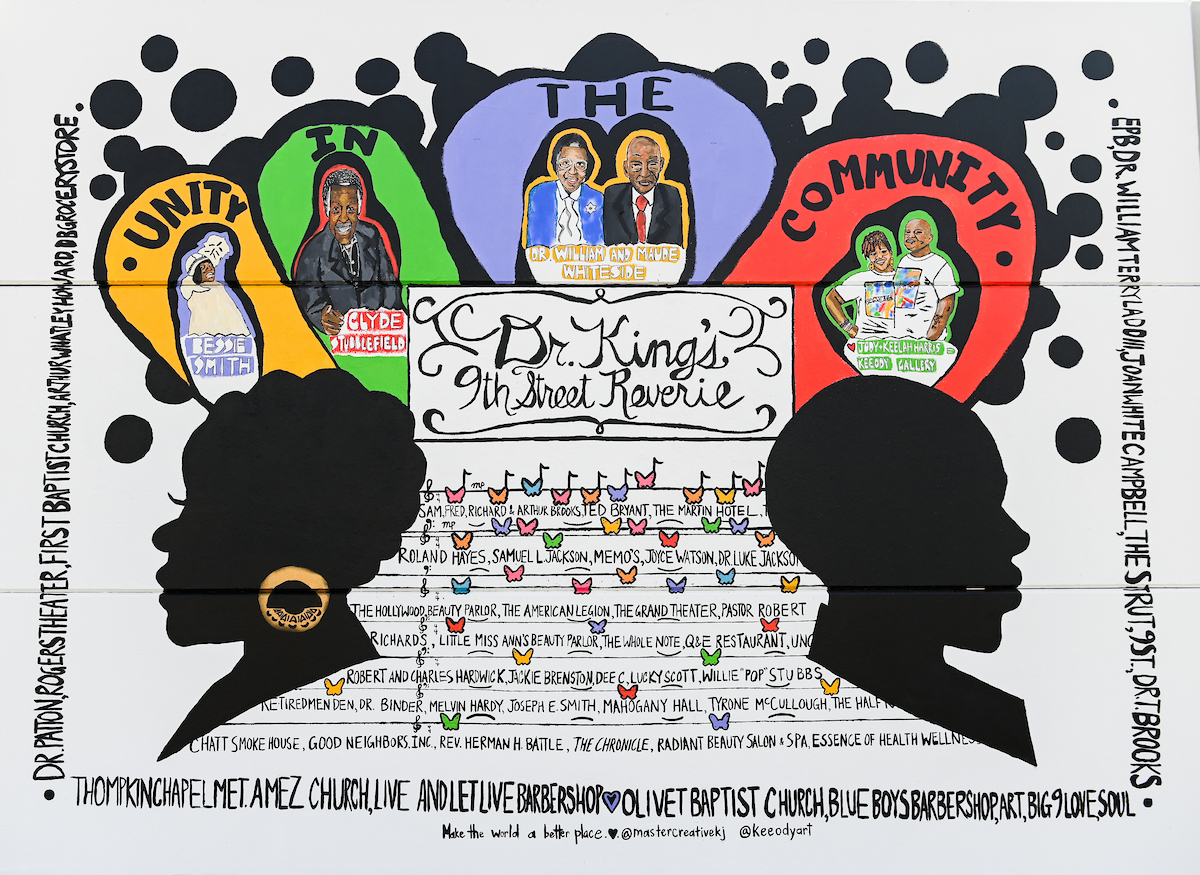 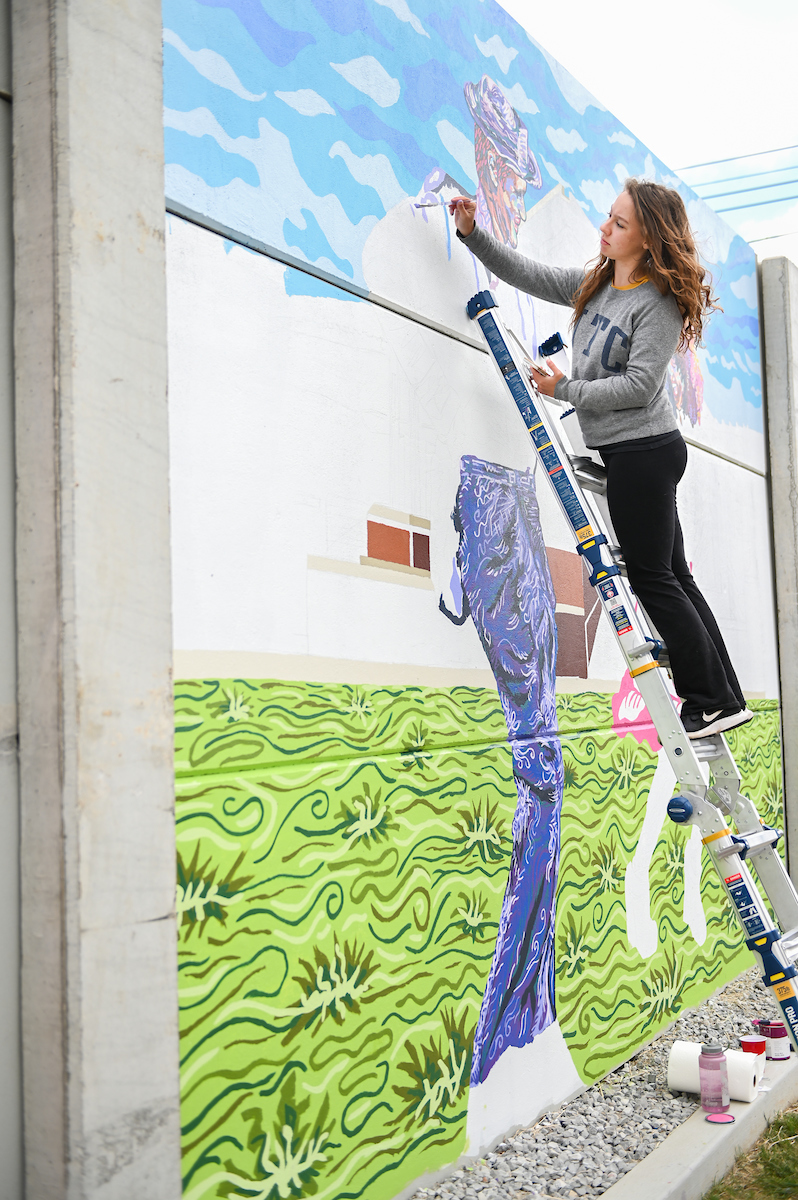 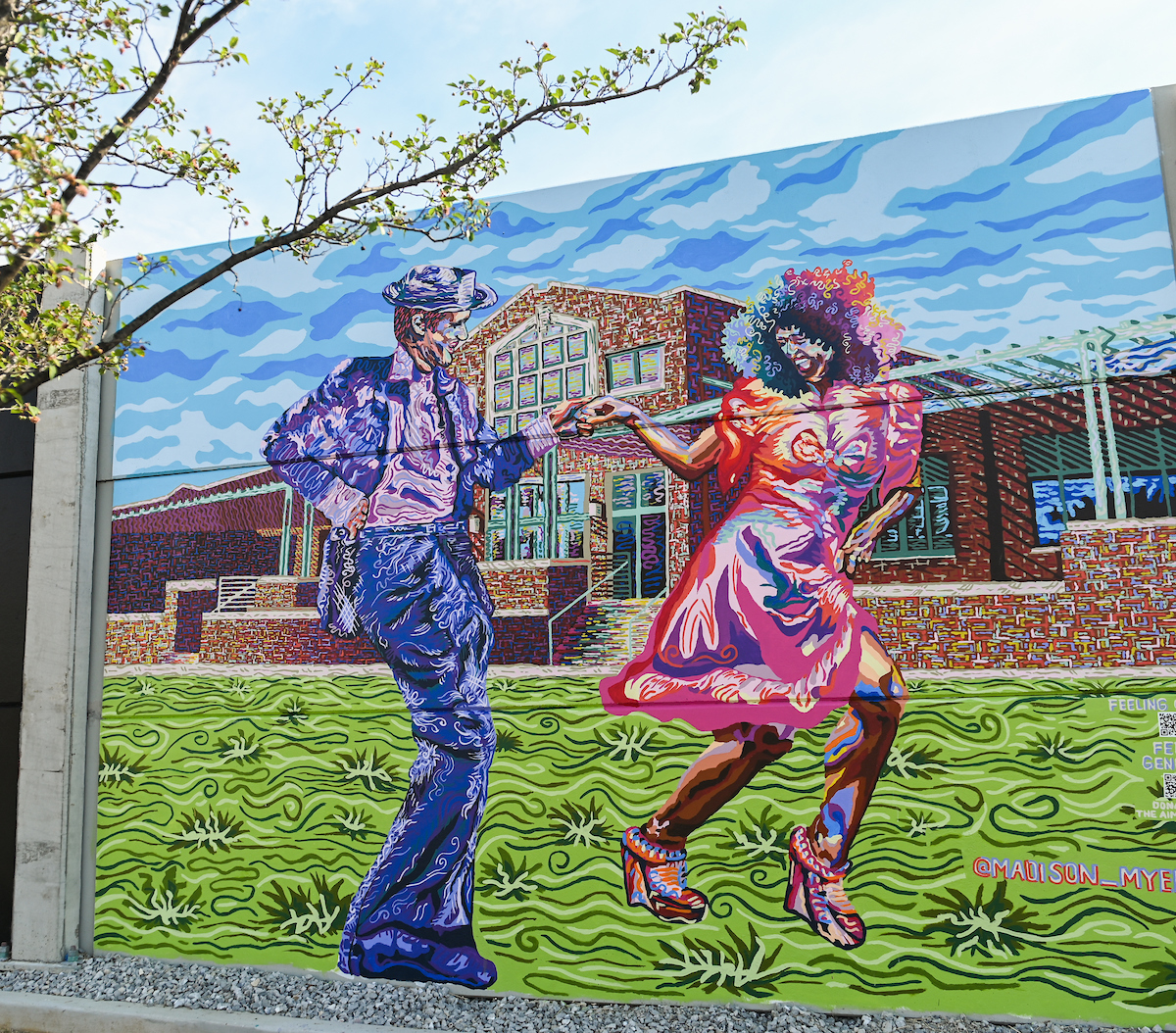 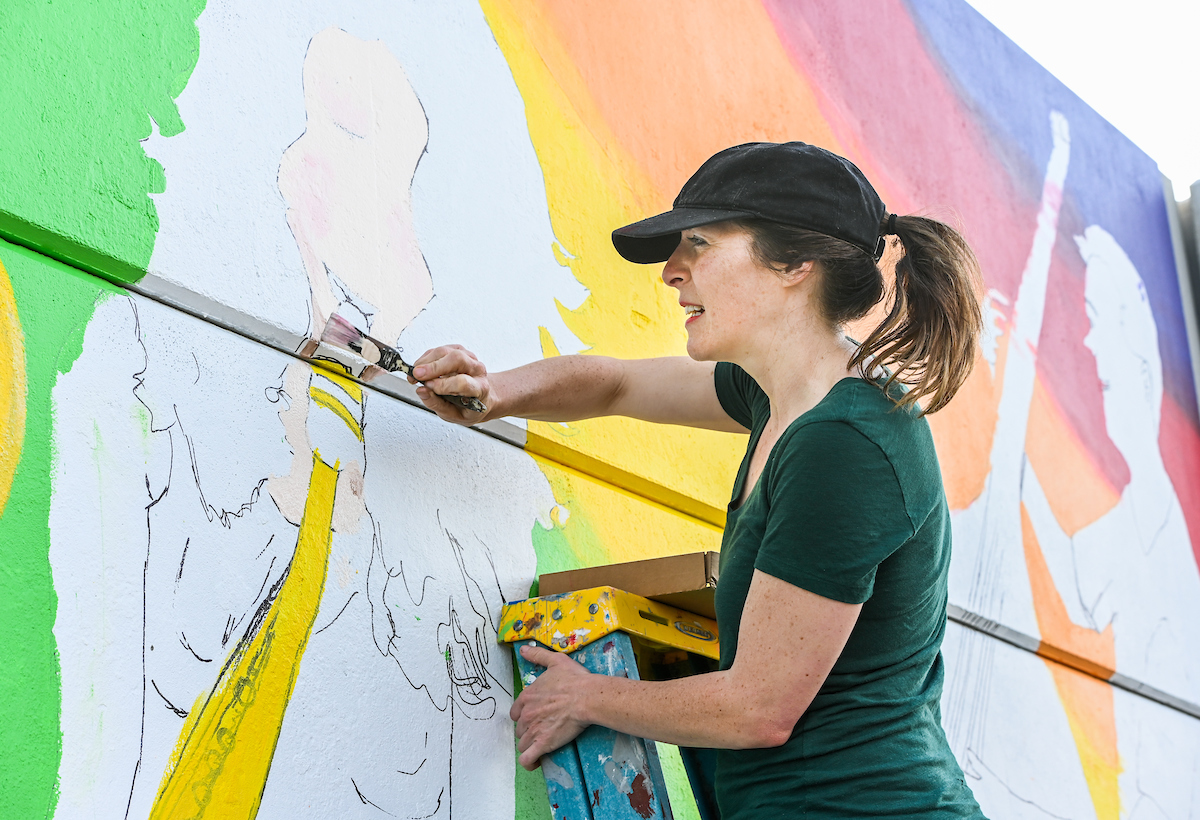 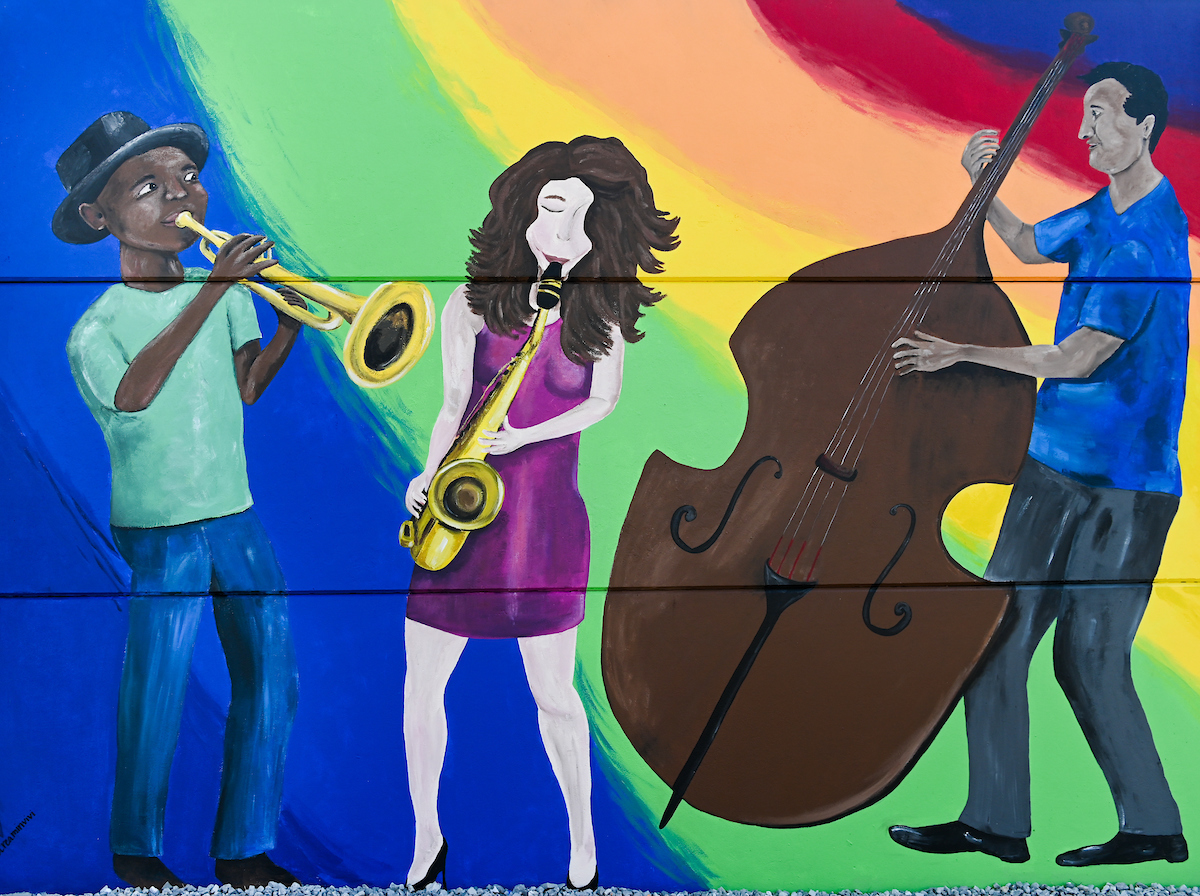