by UTC Communications and Marketing September 19, 2021 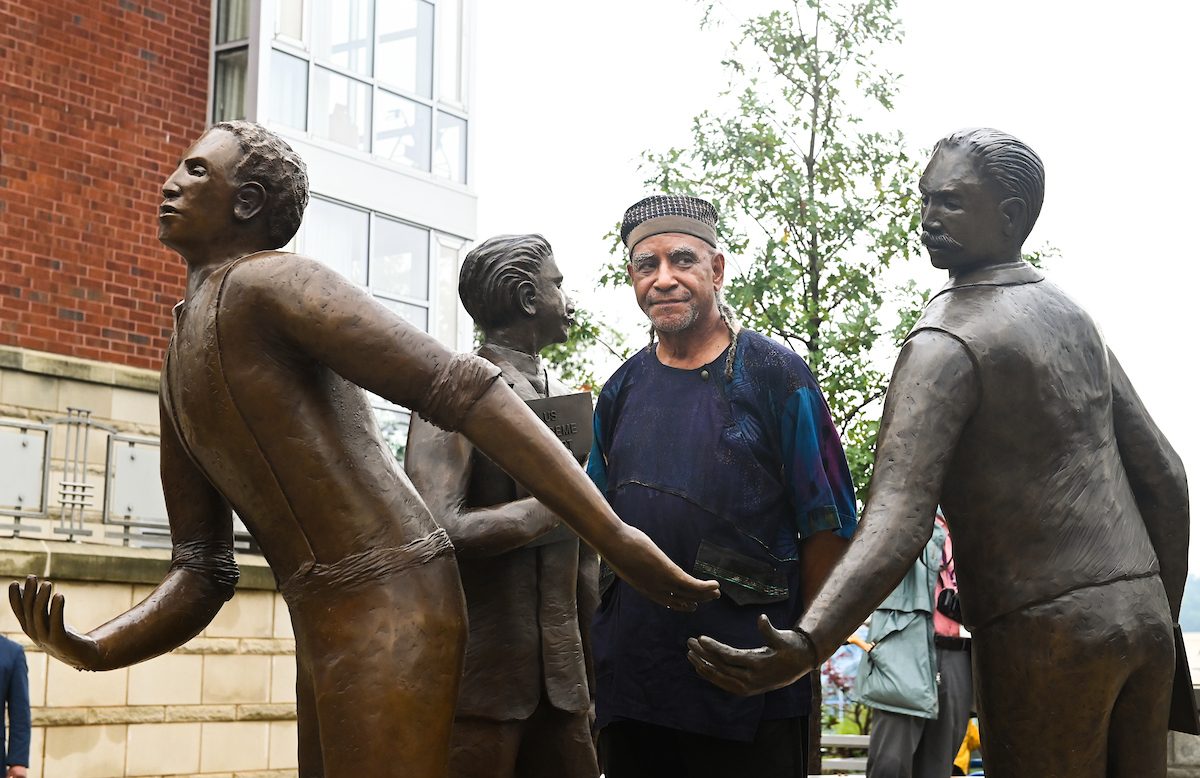 Artist Jerome Meadows stands within the sculpture he created as part of the Ed Johnson Memorial.

A crowd of more than 200 was on hand for the ceremonial unveiling of bronze sculptures honoring Johnson, falsely accused of rape and lynched from the Walnut Street Bridge in 1906, and his Black attorneys, Noah Parden and Styles Hutchins, who appealed his case to the Supreme Court after white lawyers refused.

Chattanooga Mayor Tim Kelly read a proclamation of apology from the city for the miscarriage of justice against Johnson. Keynote speaker Eddie Glaude, Jr., chair of the Department of African American Studies at Princeton University, acknowledged the rarity of communities coming together to recognize, “A profound wrong, a wrong that haunts.”

“Over 100 years later though it may be,” Glaude said to those gathered at the south end of the bridge, “This act to remember Ed Johnson, what happened on that fateful day, helps clear the path for a different way of being together here in Chattanooga.”

Artist Jerome Meadows created the statues of Johnson, Parden and Hutchins, and he revealed them with the help of Howard High School students.

Among the University of Tennessee at Chattanooga’s multiple connections to the memorial events is LaFrederick Thirkill, a longtime Hamilton County educator, 1997 UTC graduate and a leading advocate for telling Johnson’s story. While some memorials are designed to evoke emotion, Thirkill said, the Ed Johnson memorial is intended to educate.

“Seeing Ed Johnson walking away from the noose and being set free—or being just beyond the reach of the justice system—is beautifully illustrated in this memorial,” Thirkill said. “I know there are going to be people who might be upset about it, be it Black people who are upset that it happened or white people who are upset that it’s acknowledged; but those conversations are healthy because then you can examine why you have those feelings, and when conversations happen, it gives you the opportunity to see it from a different perspective.”

Chattanooga native and UTC Vice Chancellor for Diversity and Engagement Stacy Lightfoot was involved in conversations from the start of planning for the Johnson memorial and, in spring, 12 UTC Honors College students captured Johnson’s story in a five-part serial podcast as part of a semester-long course, Storytelling Through Podcasts, led by instructor Will Davis. Organizers with the Ed Johnson Project shared plans for the commemoration with listeners of WUTC-FM’s Scenic Roots with Ray Bassett.

Extensive support also has come from the UTC Department of History and Africana Studies program, associate professors Michael Thompson and Susan Eckelmann Berghel and students of both who have served as interns with the Ed Johnson Project over the years. 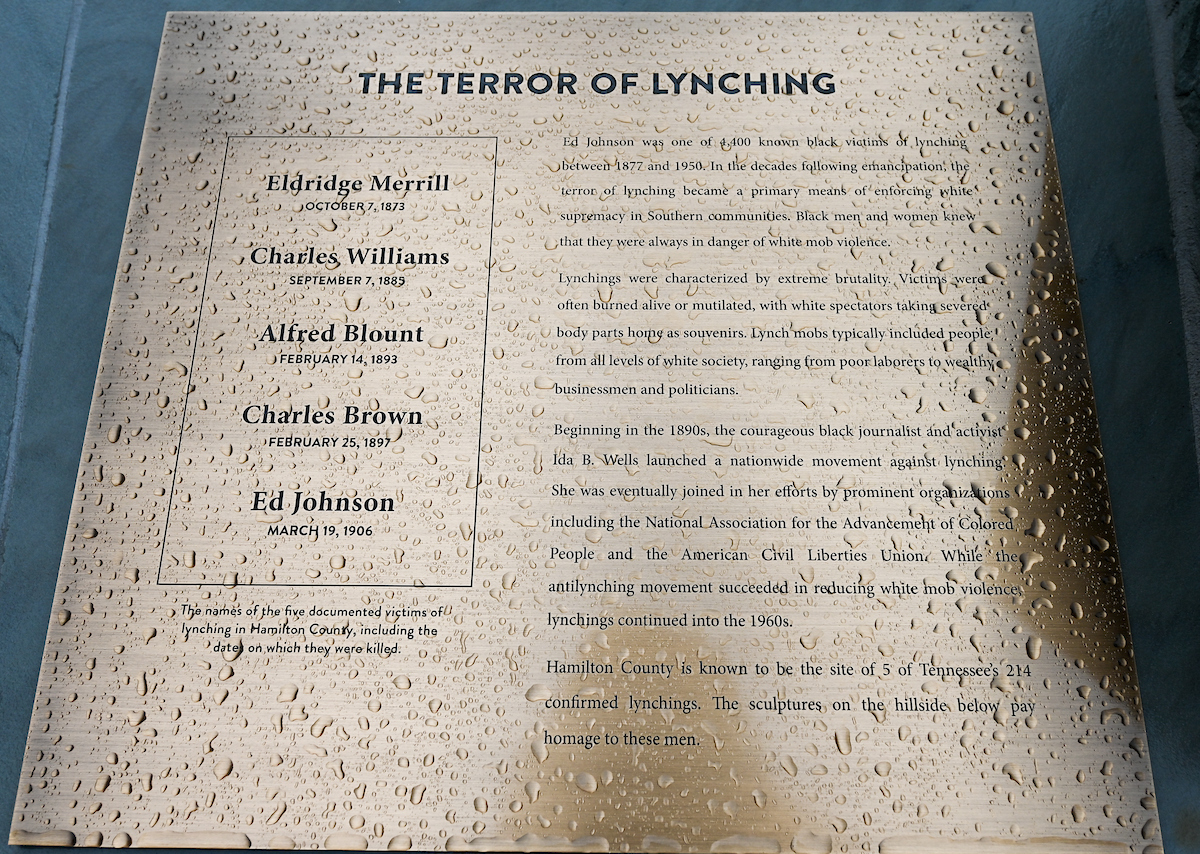 A plaque at the Walnut Street Bridge describes the history and horrors of lynchings. 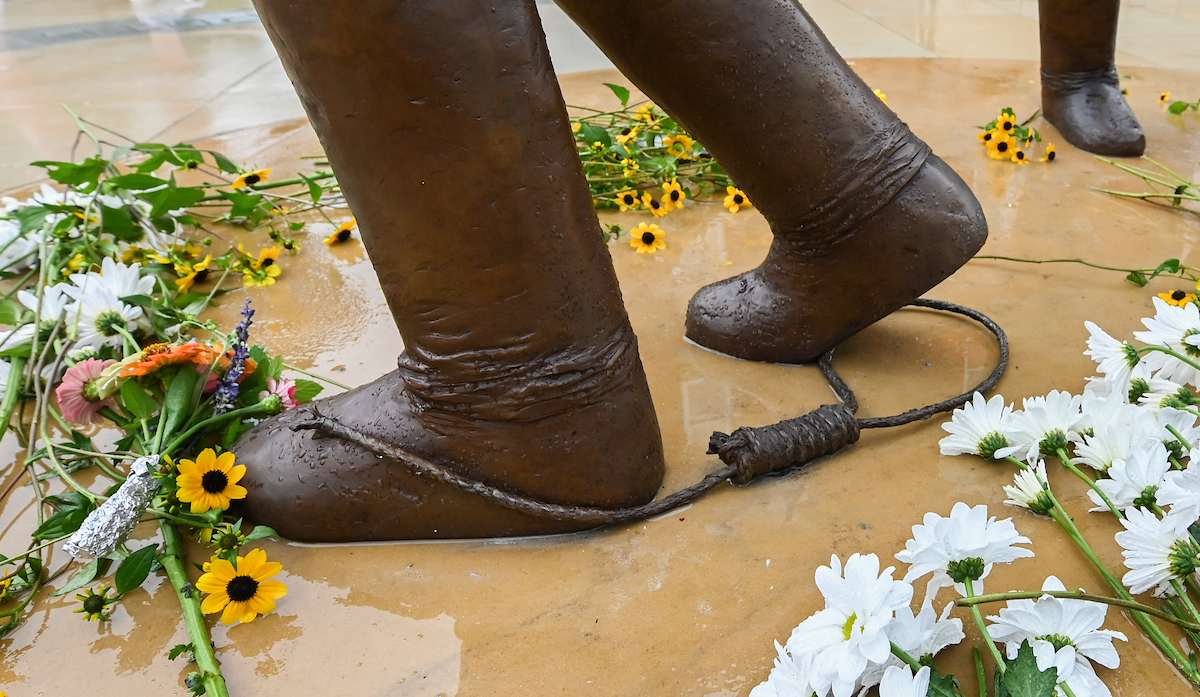 The roped feet of Ed Johnson in the sculpture at the memorial. 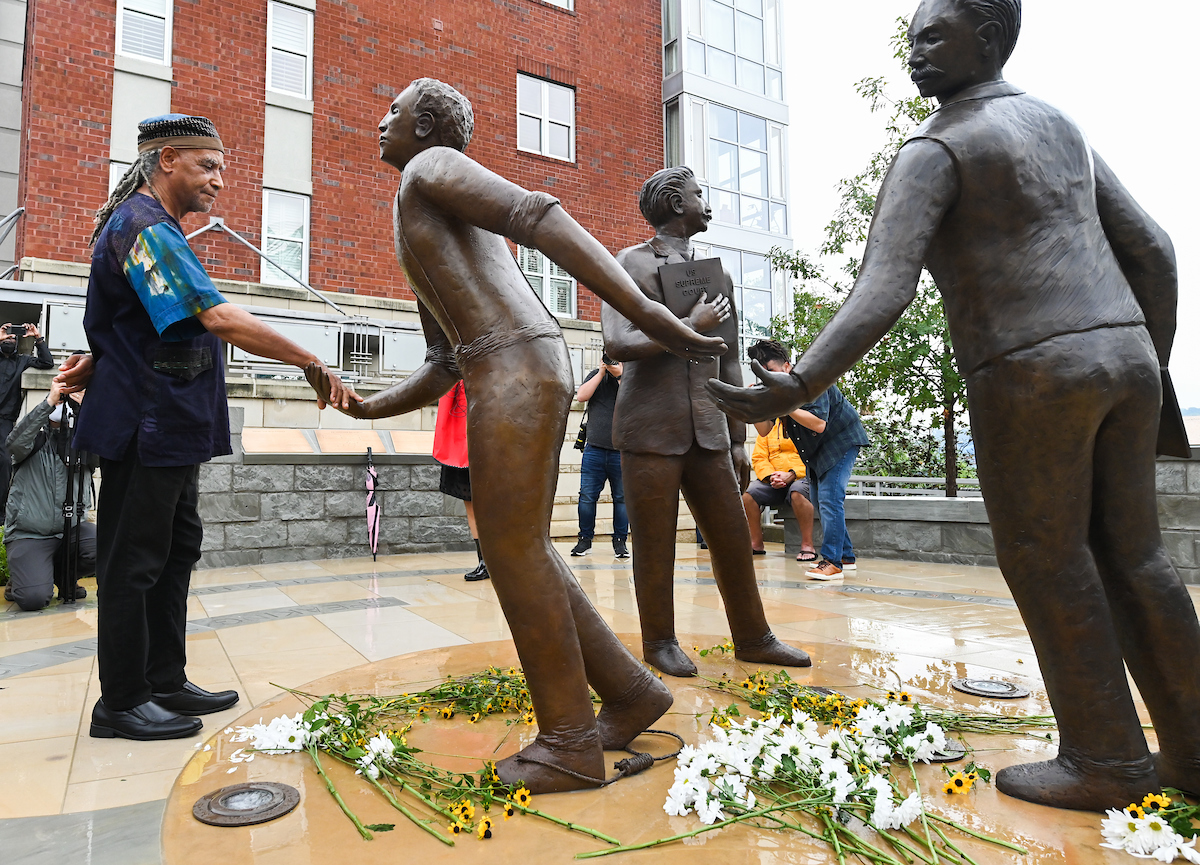 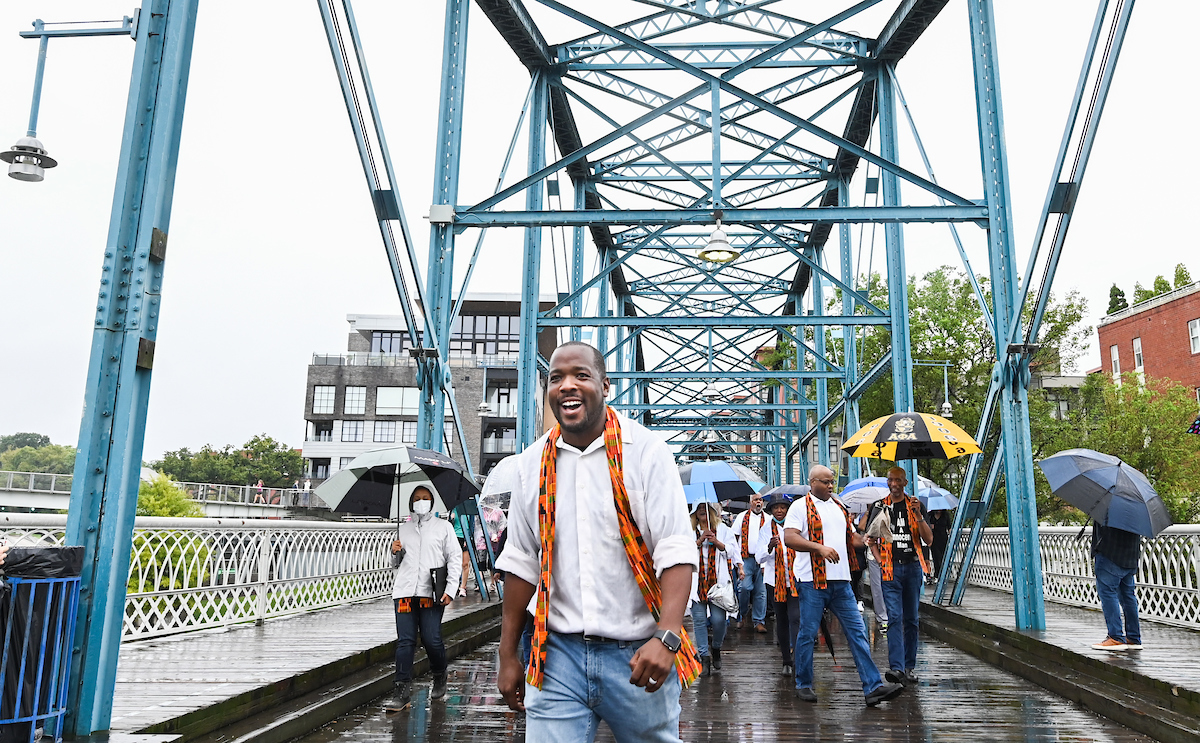 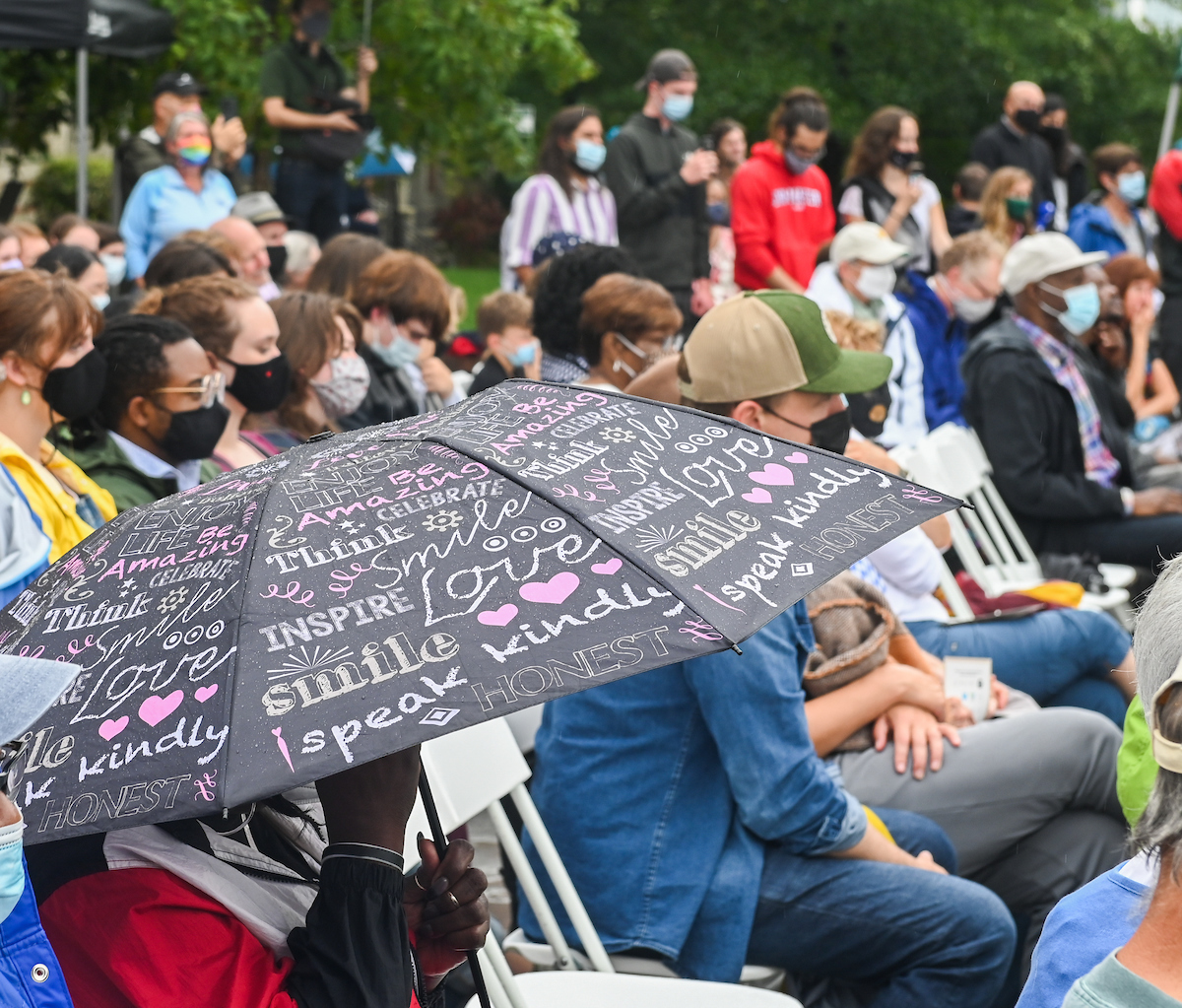 In the rain, people gather for the Ed Johnson Memorial Dedication alongside the Walnut Street Bridge. 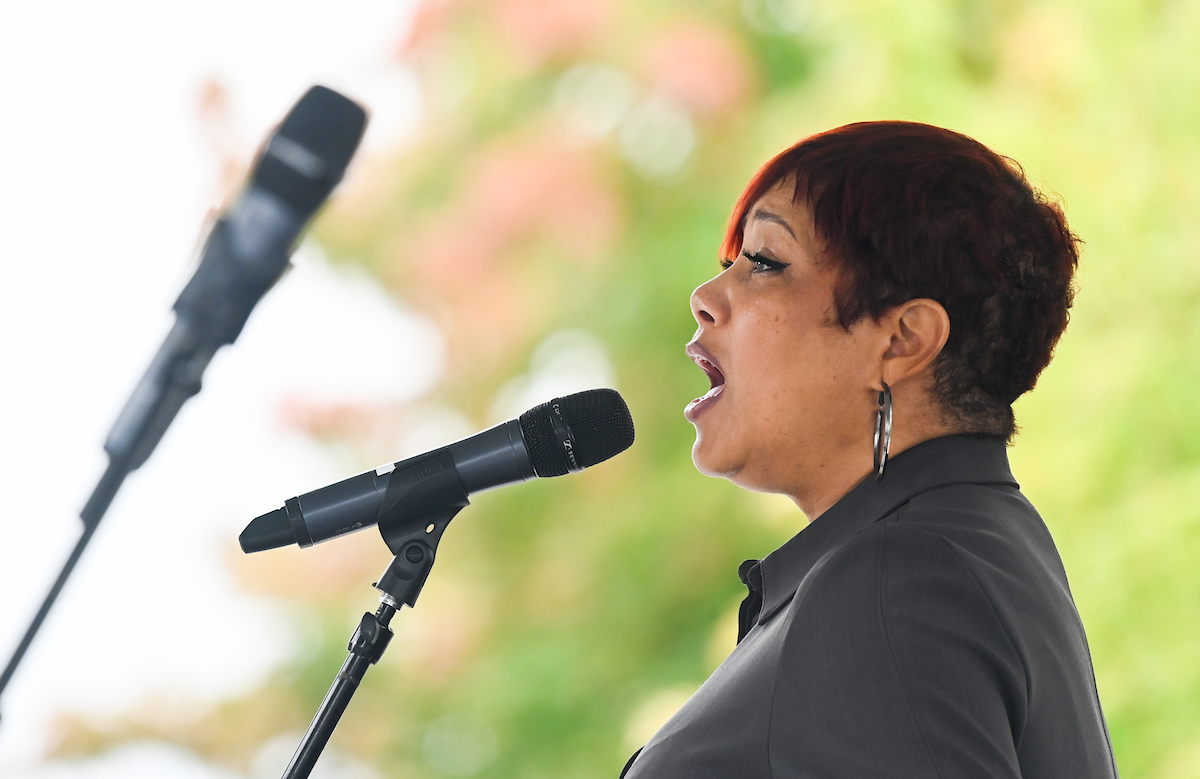 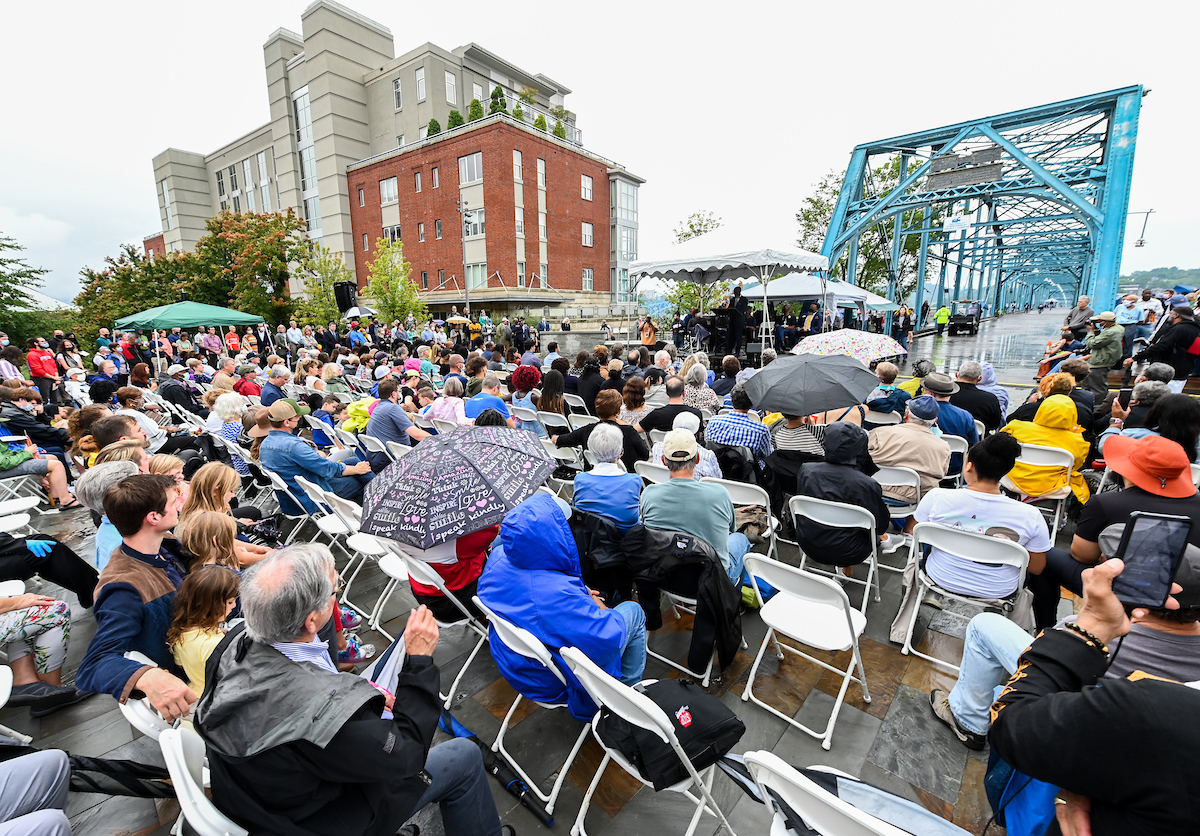 Under umbrellas and wearing raincoats, a crowd gathers for the Ed Johnson Memorial Dedication at the Walnut Street Bridge. 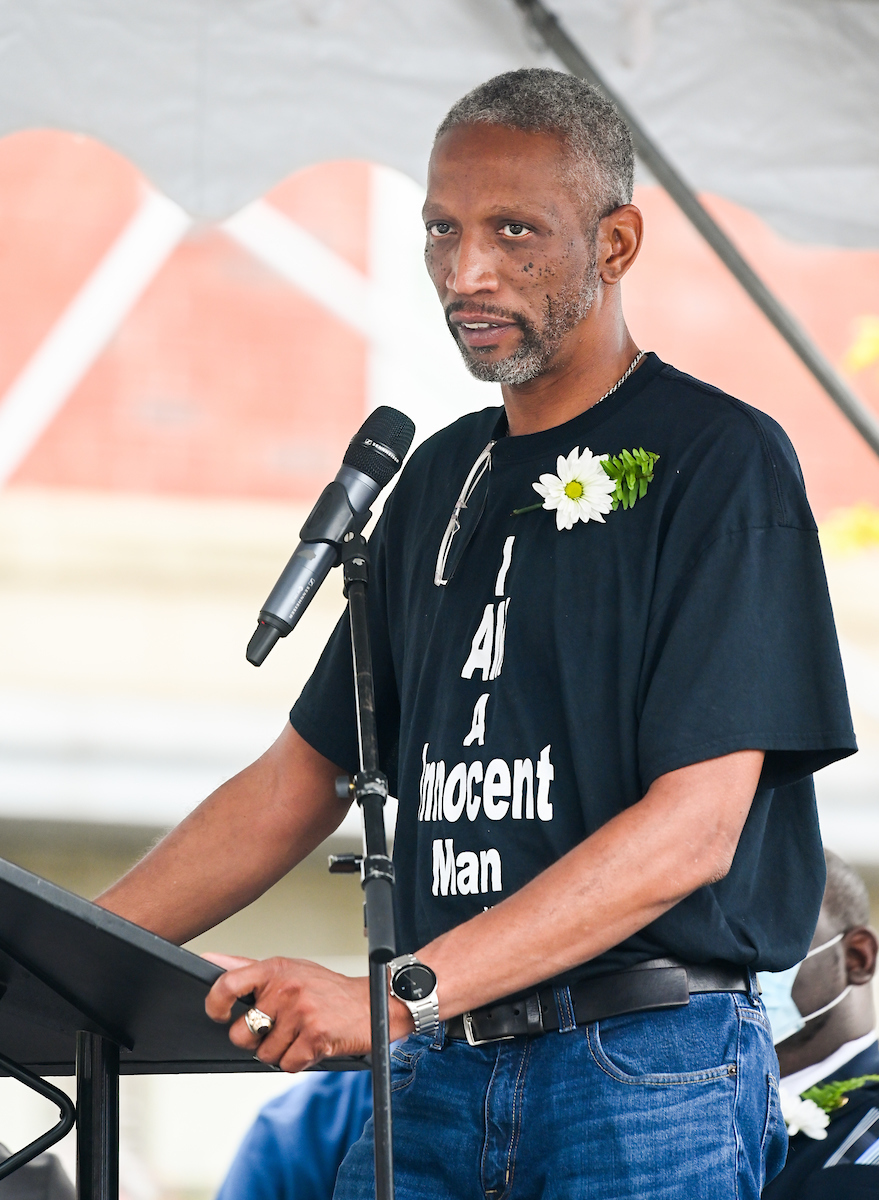 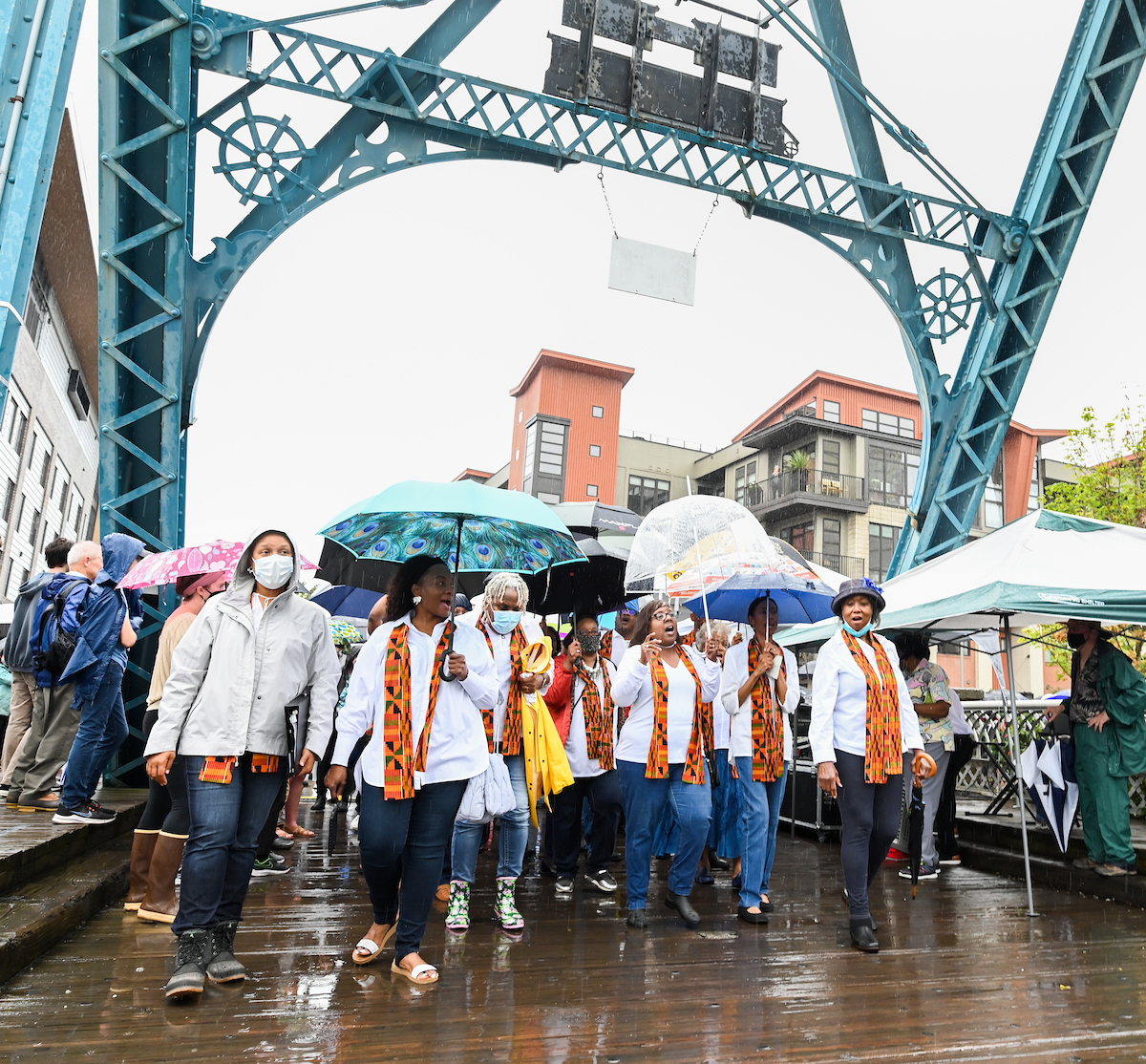 While singing, a crowd of people walk across the Walnut Street Bridge during the dedication service for the Ed Johnson Memorial. 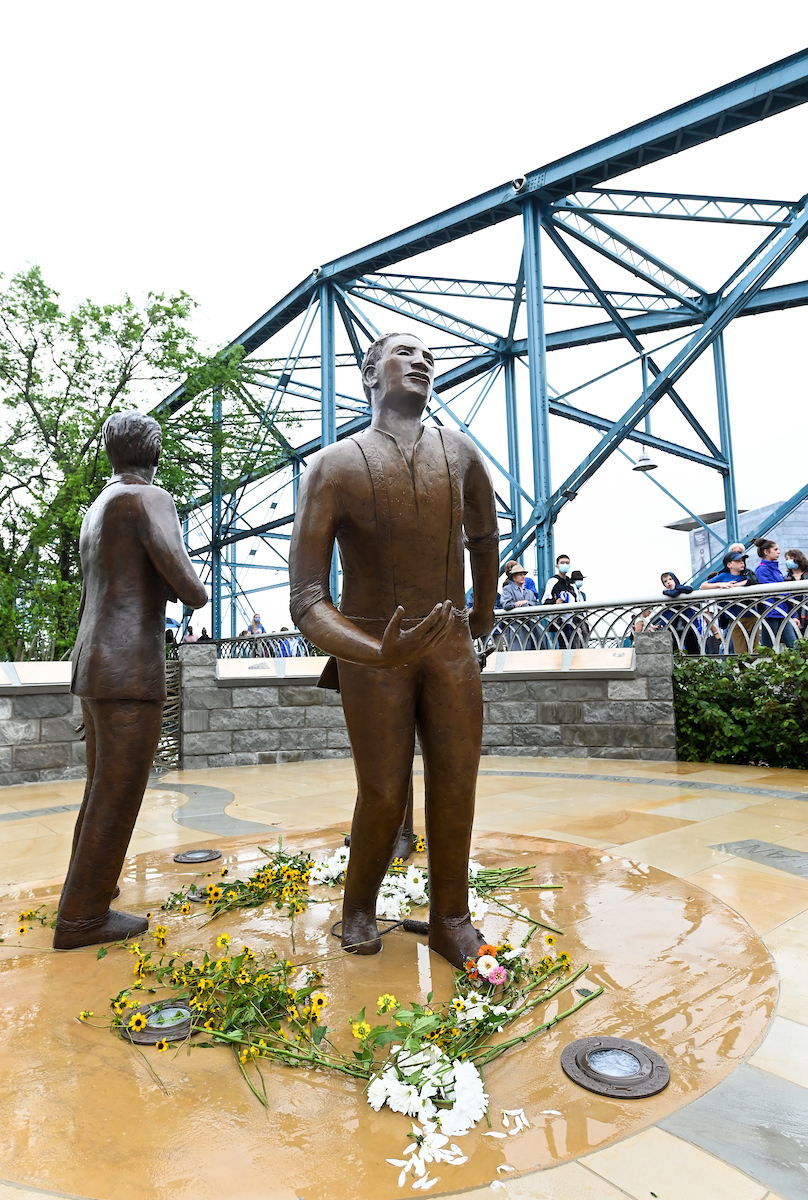 After the U.S. Supreme Court stopped Ed Johnson’s execution, a mob pulled him from the jail and lynched him. 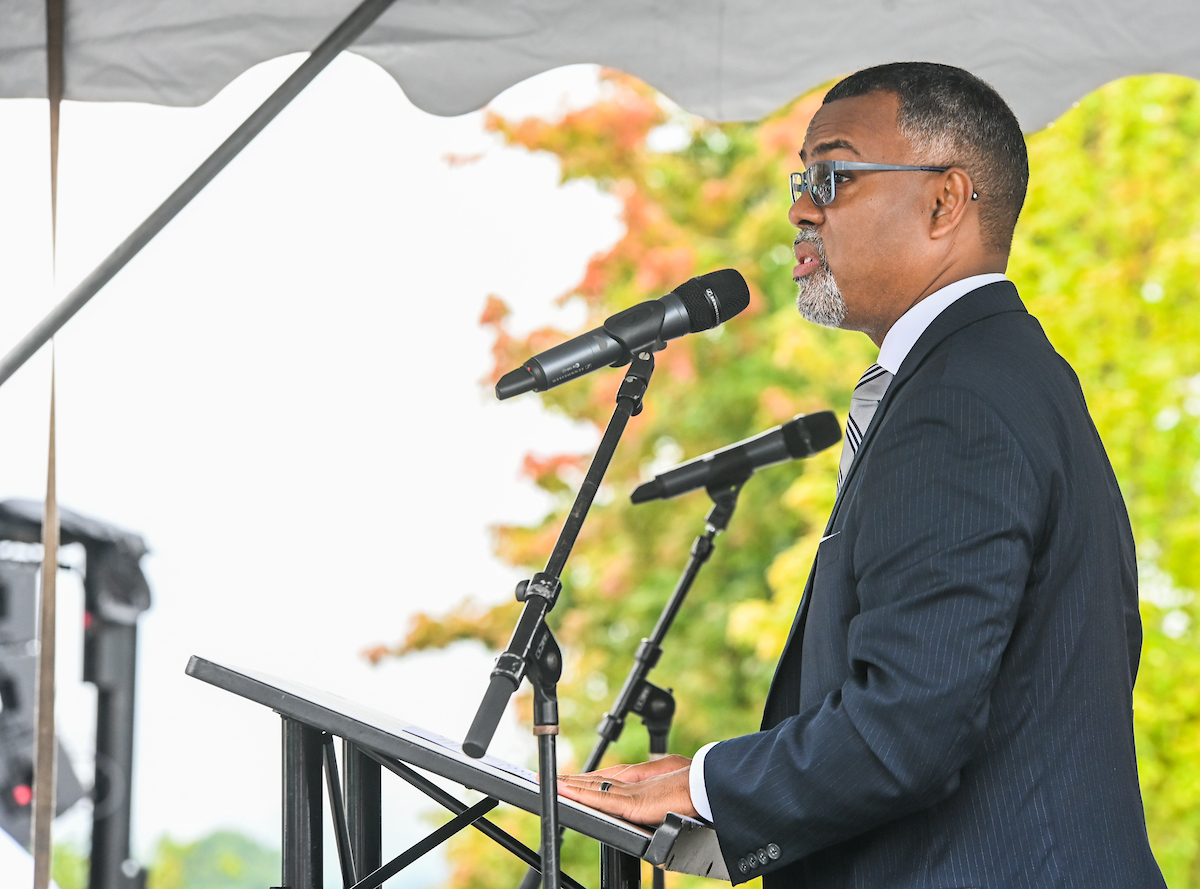 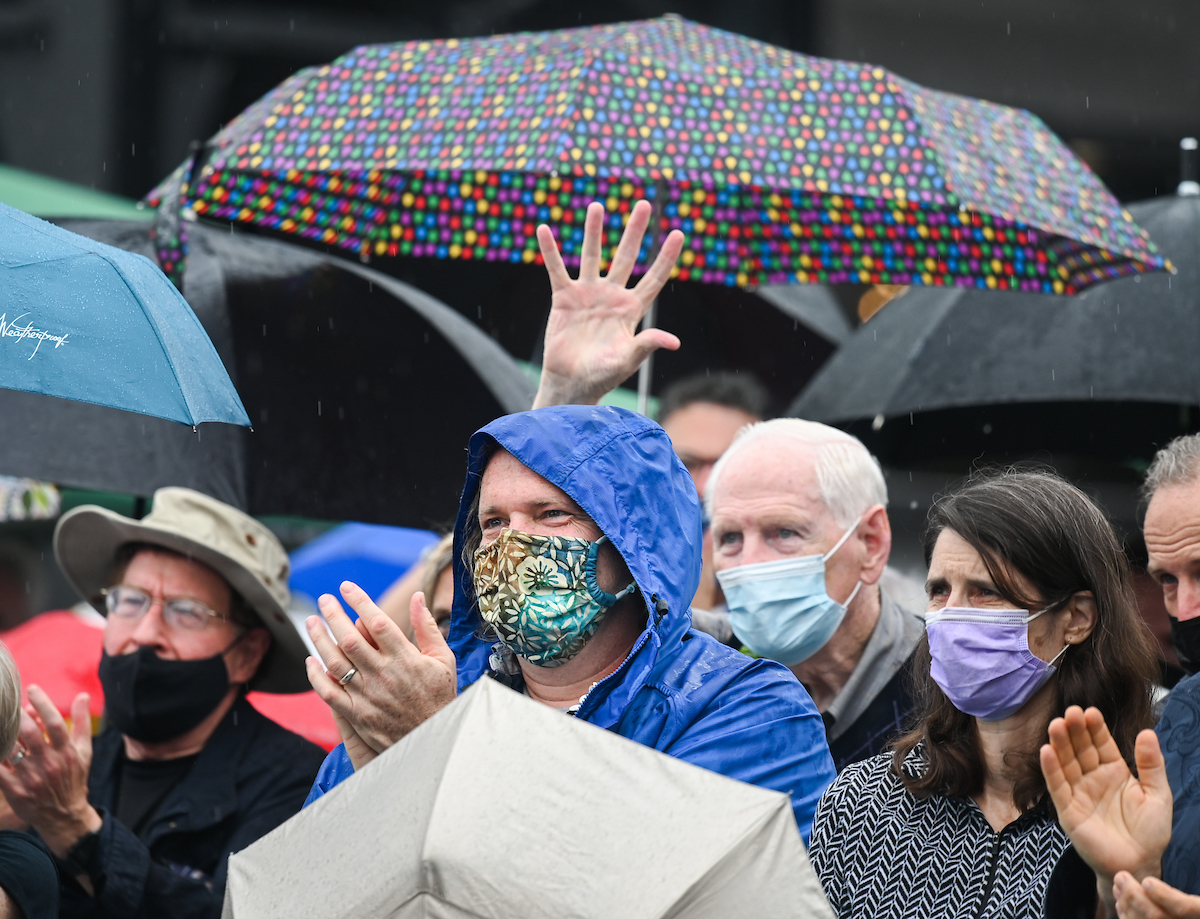 Braving the rain, a crowd listens to speakers during the dedication ceremonies at the Ed Johnson Memorial. 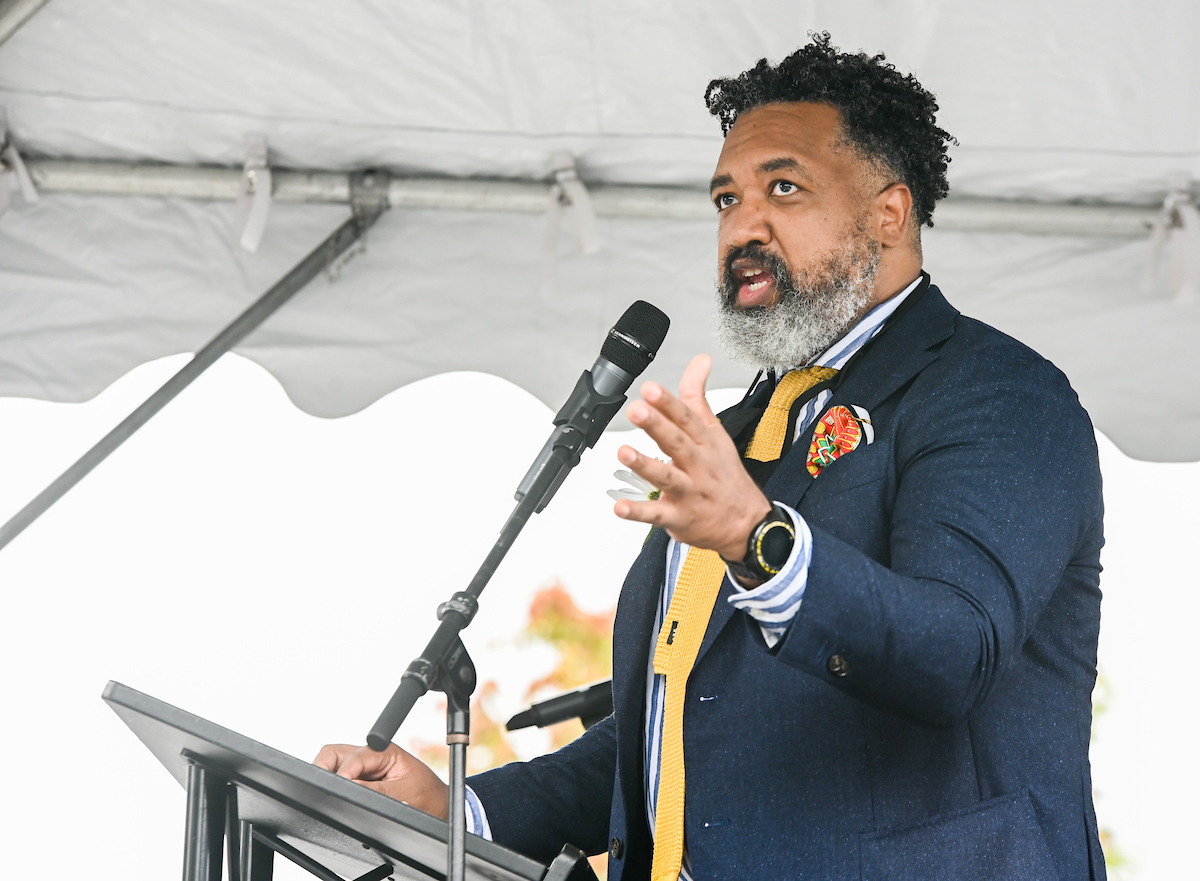 Donivan Brown, chair of the Ed Johnson committee to create the memorial. 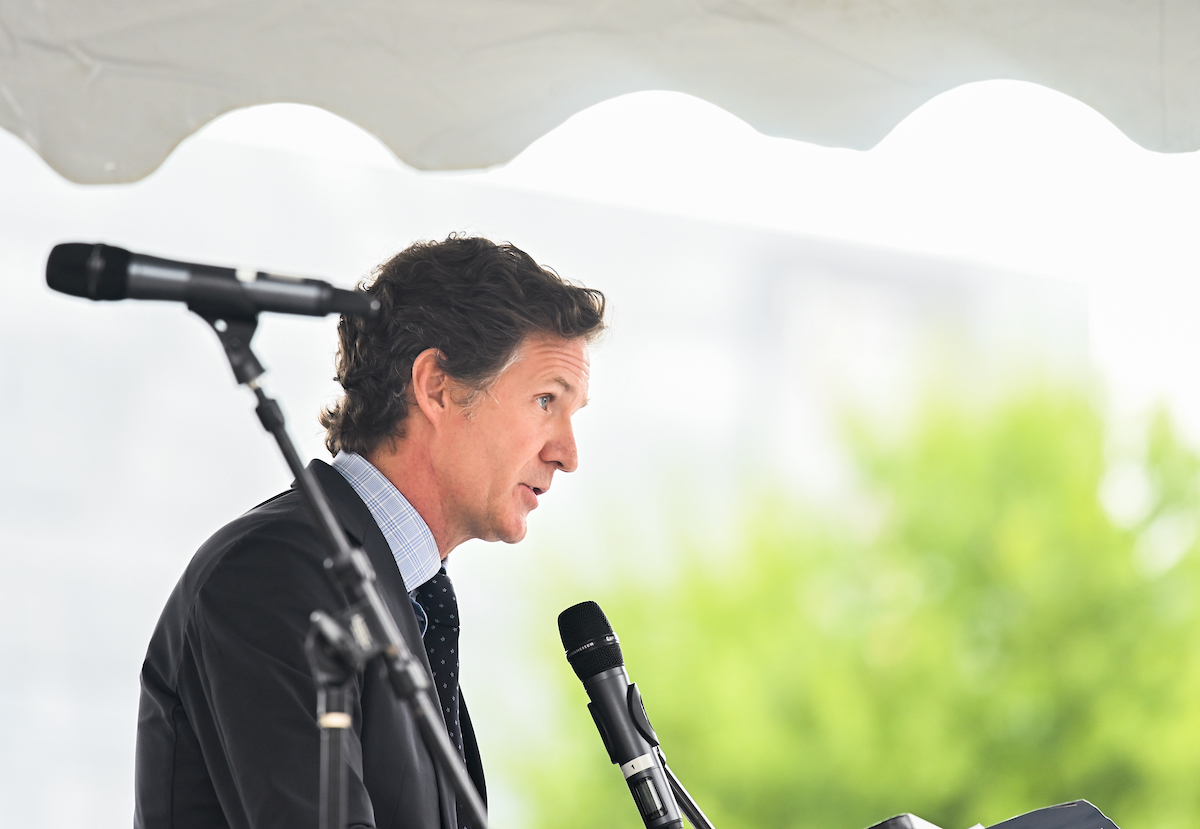 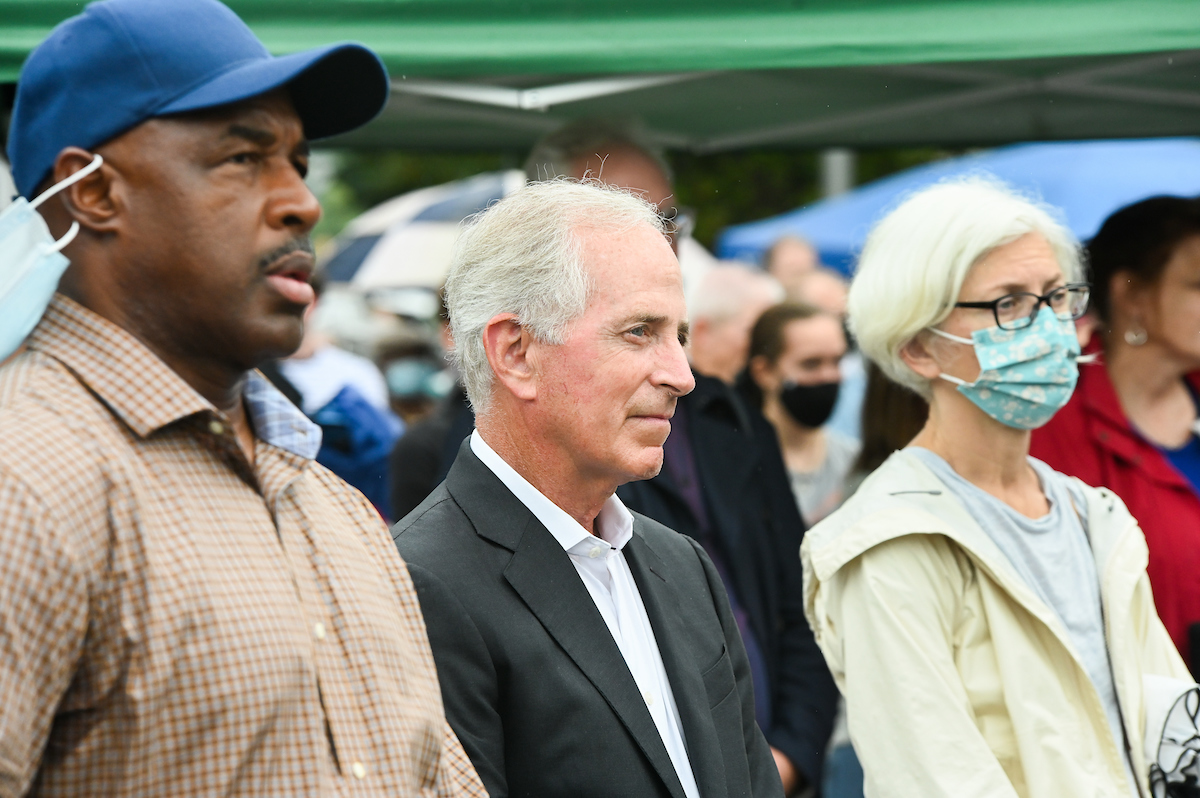