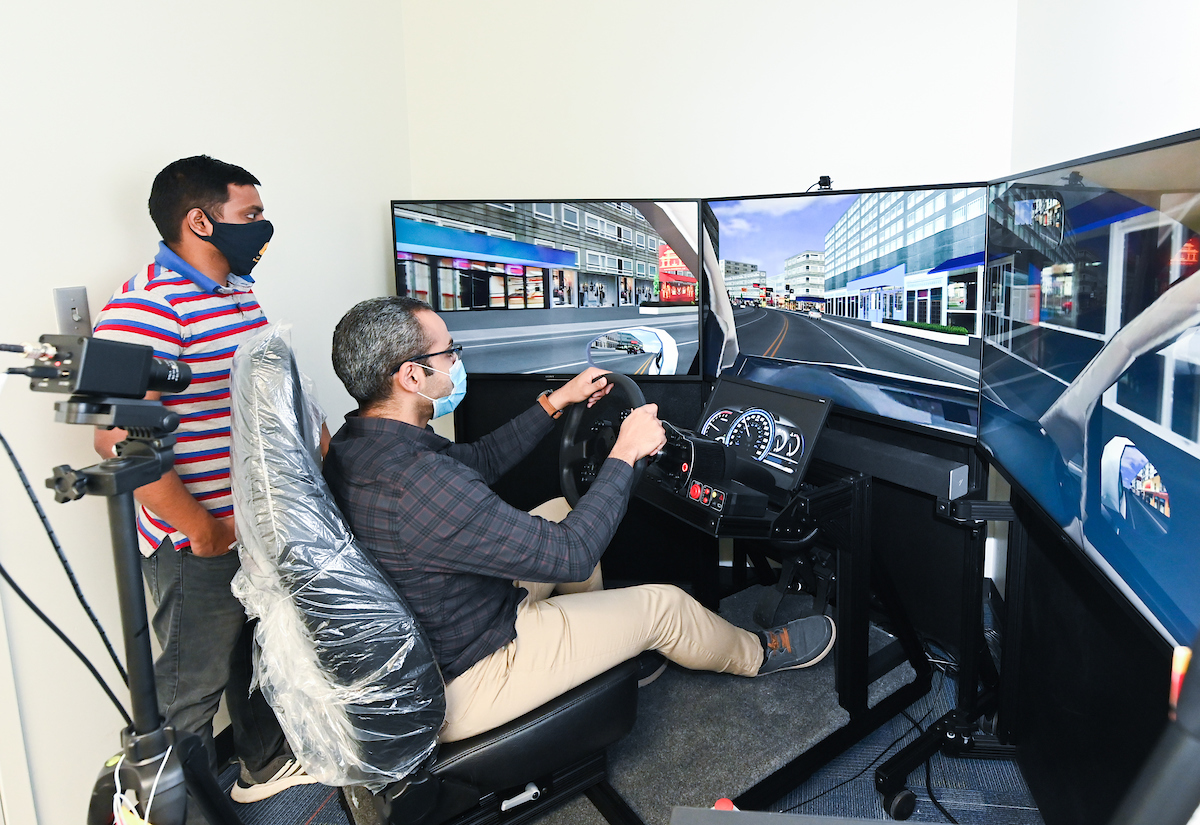 Driving simulators can be used to:

The guy just got fired. It’s so unfair! The boss had it in for him!

He goes for some drinks. A couple of shots and a couple of beers. Just to take the edge off, you know.

He gets into his car and heads for home, but those darn traffic lights keep turning red. Is the whole universe against him today?

Well, he’ll show them. He’s going to shoot through every yellow light. If he gets a traffic ticket, so what?

OK, so this guy isn’t real—thankfully—but the new driving simulator at the University of Tennessee at Chattanooga can create him with all his emotions, reactions and personal issues.

Virtually speaking, that is.

“We are working with virtual reality, and it has many applications in many disciplines,” explained Osama Osman, an assistant professor in the Department of Civil and Chemical Engineering at UTC and the driver behind the effort to buy the simulator.

The machine can be set to dozens of settings that influence the driver. Different models of automobiles, from family sedans to pickup trucks. Different weather, from rain to snow to hurricane-force winds. Different cities. Pedestrians. Construction. Even deer leaping into the road.

“You’re driving just like you’re driving your own car,” said Faiza Khan, one of two master’s students involved in the research.

The primary goal of the simulator’s multiple settings is to calculate the “human factor” in each scenario and see how it affects the entire transportation system, Osman said.

“It helps us understand how a certain design of, let’s say a traffic signal or a bridge or a roadway segment, are affecting the performance of the system as a whole. Is it good? is it bad?” said Osman, whose expertise is intelligent transportation systems and data analytics.

The simulator’s capabilities make it useful for almost anyone in engineering or computer science but also in such unexpected places as psychology, where it can be used to help determine someone’s personality by the way the person drives.

“For an example, the way a young person drives a car will not be the same as an older person,” said Jewel Rana Palit, the other graduate student helping in the research.

Osman and the graduate students are in the preliminary stages of testing and refining the simulator while also gathering deeper data into transportation systems, how they work and how to make them better.

The research is much like the work now being done by the Center for Urban Informatics and Progress (CUIP) at UTC. CUIP is a pioneer among the worldwide Smart Cities, which seek to improve everything from traffic flow and public transportation systems to electricity delivery, air quality and safety issues.

Data collected through the driving simulator could be used by CUIP in its research, Osman said.

To judge how different drivers will react to various situations on the road, though, the simulator needs an actual person to be in the driver’s seat. Someone with a prosthetic leg, for instance, or someone with a previous concussion or an elderly driver. Even someone driving drunk.

And where do you find drivers who meet these precise needs? It’s not easy, Osman said.

“That’s one of the main challenges.”