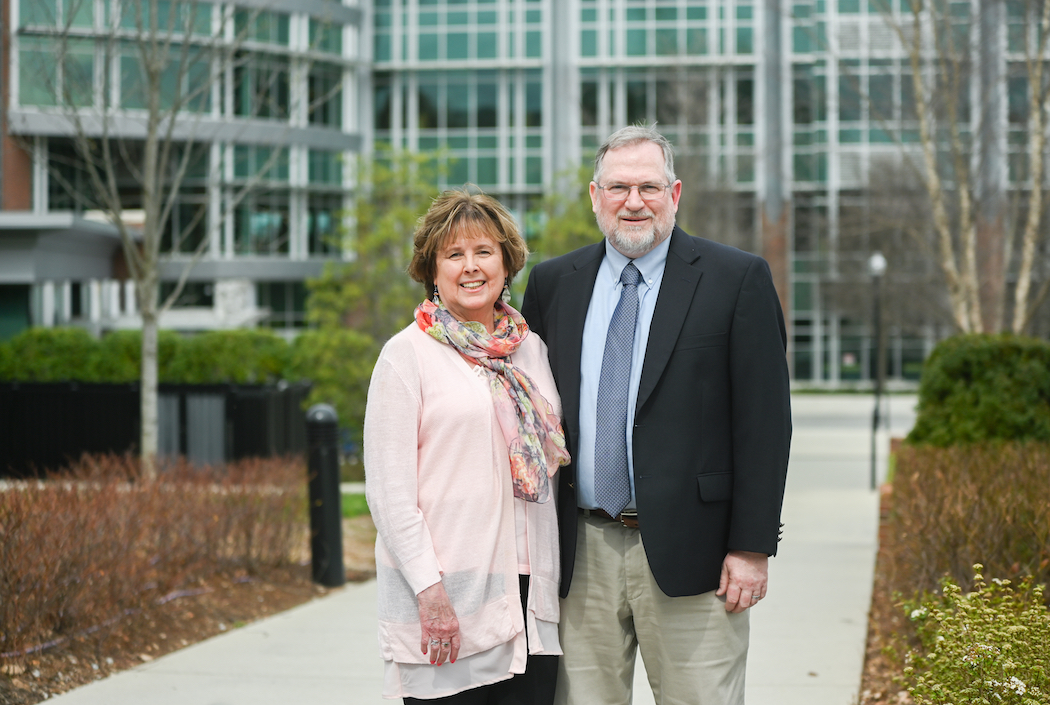 Debbie Bell worked at UTC for 44 years at UTC. Michael Bell spent 41 years at the University.

Debbie Bell spent 44 years working for the University of Tennessee at Chattanooga, the last 23 in the honors program, before retiring in June 2020.

Her husband, Michael, joined the UTC Library staff in 1980, progressing from reference librarian to head of circulation services to head of acquisitions to acting dean to assistant dean before retiring in April.

What’s the perfect gift for a couple who provided a combined 85 years of service to the University, most notably in the honors program and in the library?

Naming the Honors College library after them, of course.

The announcement of the Debbie and Michael Bell Library was one of the highlights of the Honors Alumni Gala on Oct. 9 at the Tennessee Aquarium. A formal Guerry Center dedication ceremony will take place in spring 2022.

“This is the perfect way to recognize Debbie and Michael’s contributions to UTC Honors,” said Linda Frost, dean of the Honors College. “It is a recognition of the role the two of them have played as surrogate parents to our honors students and alumni.”

The Debbie and Michael Bell Library space was, at one time, Debbie’s office.

“Naming the library for them just makes sense,” Frost continued. “Debbie and Michael have always been a team working together to support our students. I think it’s fitting that, beyond the actual name of the building, this will be the first space named for anyone in the Guerry Center.”

Debbie arrived on campus first, receiving a bachelor’s degree in English and American language and literature in 1976 before being hired as an administrative assistant in the Department of Psychology. She earned a master’s in education in 1990.

Michael joined the UTC Library staff in 1980, the first position in an academic setting offered to him out of graduate school.

“I literally drove from Nashville to Chattanooga with whatever I had in my dorm room from Vanderbilt and never left.”

“Possibly because he met me a year after he got here,” Debbie says with a laugh. “I came here for my bachelor’s and just stayed. It worked out very well for us.”

After stints in several different departments, Debbie was hired by Gavin Townsend in 1997 to work in what was then known as the University Honors program.

Greg O’Dea, now the associate dean of the Honors College and a UC Foundation professor, also began working in University Honors that summer.

“I think her real joy was in just watching these students grow and develop and blossom,” O’Dea said. “Debbie was enormously helpful to them. She had a big heart for college students, especially those who wanted to travel and study abroad and do things like that. She was just always on the outlook for opportunities for them.

“And Mike became as involved with the honors students as much as anybody else, traveling with them and getting to know them in different venues. I think that was important to both of them.”

The Bells accompanied honors students on Townsend’s annual travel abroad summer seminars, which allowed them to develop close relationships with many students. They have attended 26 Honors program weddings, including 11 in which honors students/alumni married each other.

“We don’t have children, so Michael and I jokingly talk about the students as our adopted children. They have been very important in our lives,” Debbie said. “The students enriched our lives.

“We poured our enthusiasm into the students that we met through work, and I can’t think of a better place to have worked. Over the years, I had so many people tell me I had the best job on campus.”