Bruce Perry, co-author with Oprah, to speak at UTC

by Chuck Wasserstrom November 4, 2021 — No Comments 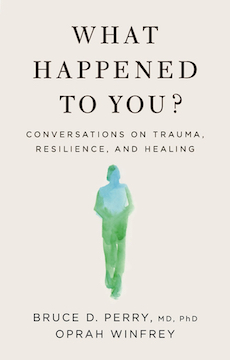 Dr. Bruce Perry is a celebrity in his own right, even though he said he’s uncomfortable in that space.

Perry, who received M.D. and Ph.D. degrees from Northwestern University, is the principal of the Neurosequential Network, an approach that develops and disseminates innovative programs and practice to improve life for children, families and communities.

He has given talks regarding children’s mental health and neurodevelopment to various audiences, including policy-making groups such as the White House Summit on Violence and the U.S. House Committee on Education.

He has been interviewed and featured in numerous media entities, including National Public Radio, “60 Minutes,” “The Today Show” and “Good Morning America.”

But when he appears on the University of Tennessee at Chattanooga campus Wednesday to discuss his new book, he believes most people will want to know about his relationship with his recent co-author — Oprah Winfrey.

“I think people are way more interested in my connection to Oprah than they are in the work I do,” Perry said. “So I may talk a little bit about how we met, the evolution of our relationship and why that ended up becoming a book.”

“What Happened to You? Conversations on Trauma, Resilience, and Healing,” the book he coauthored with Winfrey, sat atop The New York Times nonfiction bestseller list earlier this year. The book alternates between Winfrey recounting traumatic incidents from her past and Perry drawing from his decades-long medical practice to shed light on how those and other episodes of trauma can resonate well into adulthood.

Perry’s visit to UTC is co-sponsored by the departments of English and Psychology. Aaron Shaheen, the George C. Connor Professor of American Literature in the Department of English, will provide introductory remarks. Alexandra Zelin, an assistant professor in psychology, will serve as moderator.

“It’s not often we get someone whose work has spent over 25 weeks on The New York Times bestseller list on campus,” Shaheen said.

“I’m fascinated by the structure of the book itself. It’s dual-pronged, where Oprah will recall childhood traumas, and then Dr. Perry will respond to them from his professional standpoint,” he said. “As an English professor, I’m interested in learning about how this two-part call and response or dialectical development structure came about.”

Perry and Winfrey have known each other for more than 30 years, first meeting when he was on the faculty at the University of Chicago and “The Oprah Winfrey Show”—broadcast from Chicago—was in its early stages. After Winfrey went public about her own experience with sexual abuse, she was introduced to Perry, and the two immediately hit it off.

“I just know her as a person that I’ve known for a long time. She’s funny and smart and has a big heart and she manages that celebrity space pretty well,” Perry said. “Being around her, seeing what she has to deal with, it’s something somebody like me wouldn’t want.”

The decision to collaborate on a book came after Winfrey’s story for “60 Minutes” about the impact of a Milwaukee child abuse program, SaintA, which works with people impacted by trauma.

While putting the story together, Winfrey was told that SaintA used a model developed by Perry.

“She said, ‘I know Bruce,’ so she called me up and asked, ‘Would you want to be on this story?’” he recalled.

The interview and piece resonated with a lot of people, especially Winfrey.

“One of the things that happened during our conversation,” Perry said, “was that she kept trying to figure out why these kids were a certain way and what’s wrong with them. ‘Why don’t they understand this and this and this?’

“And I said, ‘The key question isn’t what’s wrong with them? The key question is, ‘What happened to them that they are this way?’ And for whatever reason, with the reframing of the question, a lot of things clicked; things that we talked about in the past all of a sudden made more sense to her.

“I think it’s important stuff because I study it and I think it really had a lot of meaning to her. And then her editor asked Oprah if she would ask me if I’d write a book about this.”

Perry said the two aspired to reach many people through their collaborative effort, but neither expected “What Happened to You?” to become as popular as it is.

“Understanding some of the concepts is important for the way you parent or coach or do therapeutic work or teach, or really for any walk of life that you’re involved in.”

Tagged with: and Healing bruce perry Oprah Winfrey Resilience What Happened to You? Conversations on Trauma