Power in Purple: Sculpture meant to spur conversations and connections 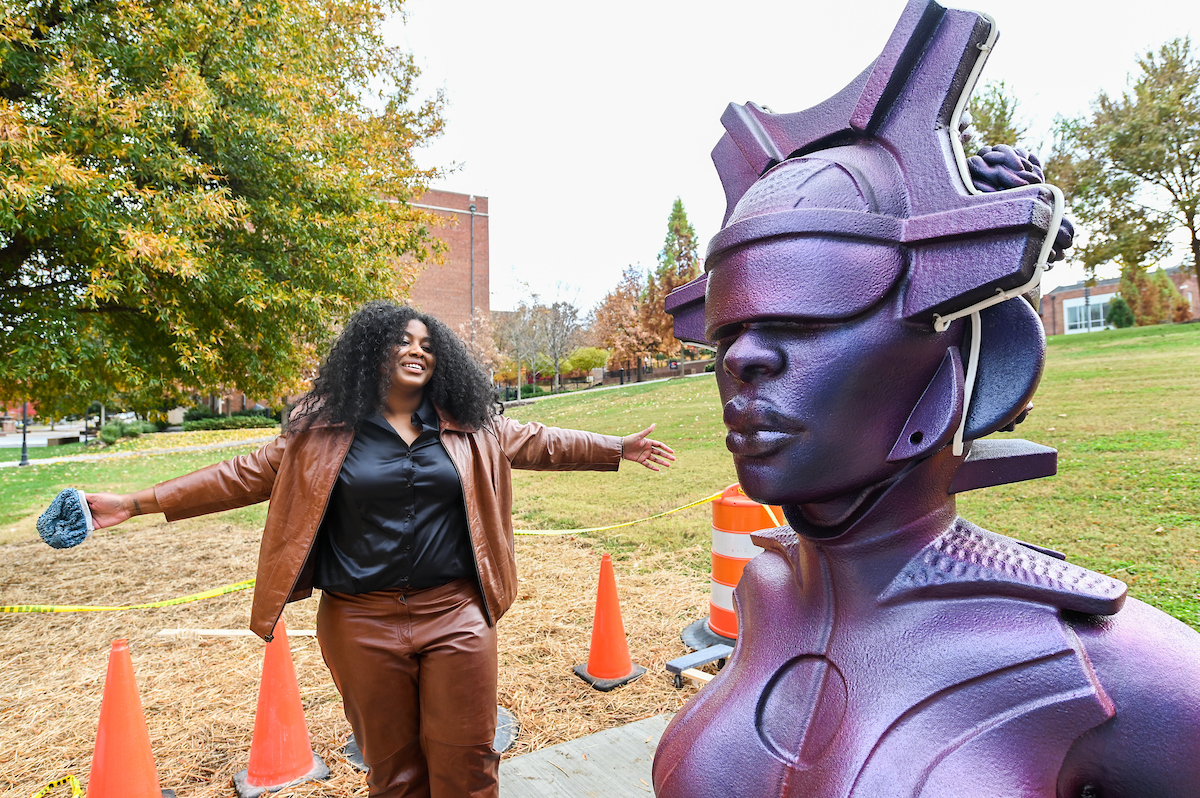 Artist Ellex Swavoni’s sculpture, “Atlantis Rising,” will be displayed on the UTC campus until May 2022.

She can talk about Galactus, the villain in the last few Avenger movies. She knows about Silver Surfer, one of the lesser-known characters in Marvel Comics’ cosmos. She is wide-eyed when someone who has watched many of the Marvel films has not seen the Avengers’ climax movie, “Endgame.”

Her expertise is one of the reasons a larger-than-life, superhero-esque quality radiates from her sculpture, “Atlantis Rising,” installed Thursday on the University of Tennessee at Chattanooga campus. Until May 2022, its home will be on Vine Street across from the University Center.

When Swavoni lists her inspirations for the sculpture, she includes the lost underwater city of Atlantis, deep-sea creatures like rainbow squid and—yes— Galactus.

Eight feet tall and about 350 pounds, the iridescent purple “Atlantis Rising” is a woman seemingly emerging from the Earth. Clothed in a futuristic-looking outfit with a solid visor that eliminates her sight and a star-like helmet with LED lighting on its edges, she is clearly powerful.

Like many of Swavoni’s pieces, the woman is of African descent, but the sculpture’s intent stretches past racial significance, she said.

“A lot of the times in the work, people can see themselves, especially women, because it’s a female figure embodying that kind of power, that kind of presence, so it extends beyond race,” Swavoni said. “It’s more like a monument of futuristic thoughts having some type of power over your future. Of being able to write your own narratives.”

The sculpture’s installation is part of a new program by The Institute of Contemporary Art to showcase a rotating series of contemporary sculpture that will be placed across campus. Titled “ICA Night & Day,” the program is an effort by the ICA to expand beyond its gallery in the Fine Arts Center.

Based in Atlanta, Swavoni said she has been making artistic works since she was eight years old, starting with small toys. Her works grew larger as she grew up. She graduated with a degree in graphic design in 2014, but kept her hand in art, eventually learning how to work with resins and polyurethane and how to make molds for casting.

In 2018, she began her career as a full-time artist and since 2019, when she created “Atlantis Rising,” has made large sculptures that have been placed on publicly owned land, including several locations in Atlanta.

Rachel Reese, director and curator of ICA@UTC, first came across Swavoni’s art this past winter, including “Atlantis Rising,” and reached out to her. With the diverse community on the UTC campus, Reese thought the sculpture would bring out different impressions and create new conversations.

“I hope people just enjoy engaging with contemporary sculpture and thinking about the different perspectives that artists bring to their work by responding to the times. I think that’s what is great about contemporary artists,” Reese said.

She described “Atlantis Rising” as a “hopeful piece.”

“I see her as this warrior protectress that’s coming up from the Earth, and I think students will definitely respond to it in that way. We do have a diverse campus community, so I’m going to be encouraged to hear whatever kind of responses people have to it.”

Contrasting reactions that lead to thoughtful conversations are among the important goals for her artwork, Swavoni said. Displaying one of her large pieces on a university campus with its wide range of students “was a great fit.”

“Working with an organization like this, working with a university, is on the list of where I want to display work, so that I’m in conversation with students,” she said.