Self-assembling Carbon Nanotubes: A Story that Tells Itself

Nanotube wires self-assemble under the influence of a directed electric field from the Tesla coil. The effect was discovered by scientists at Rice University, who call it Teslaphoresis. (Credit: Jeff Fitlow/Rice University) 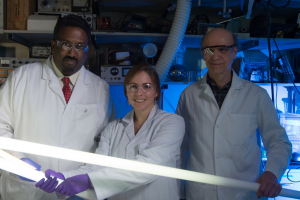 Researchers at the University of Tennessee in Chattanooga (UTC), Rice University and Texas A&M University have discovered that the strong force field emitted by a Tesla coil can guide tiny tubes of carbon invisible to the naked eye to self-assemble into wire-like structures as long as your hand, or up to 15 centimeters long. The discovery is detailed in a research paper published April 14, 2016 in ACS Nano. The fact that the T1000 robot in The Terminator was able to put himself back together after Arnold Schwarzenegger froze and shattered him into tiny metallic pieces now seems not quite so far-fetched. To make the science fiction a bit more realistic, T1000 would have needed a giant Tesla coil.

Self-assembling nanostructures have applications in biotechnology, nanomedicine, electronics and materials science. The idea is to design a process whereby very small materials can be directed into macro-scale structures from the bottom up.

“If you grow a tree, and then you cut it up into pieces, you have pieces of wood,” said Tom Rybolt, Professor of Chemistry and Head Department of Chemistry and Physics at UTC and co-author of the ACS Nano paper. “But if you think about what the tree is doing, the tree is self-assembling cellulose and lignin and other materials that make up the wood. That’s an example of a material in nature, but people have dreams about harnessing that process [in materials science], where molecules or small structures could self-assemble into something that could be useful.” 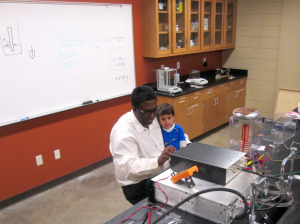 Paul Cherukuri with his son, Adam, in a UTC lab working with a Tesla coil. (Credit: Lindsey Bornhoeft).

Lindsey Rae Bornhoeft, currently a biomedical engineering graduate student at Texas A&M, and Paul Cherukuri, a chemist at Rice University, found a way to do just this. They call it Teslaphoresis, because it involves moving nanostructures using the wireless electric force field generated by a Tesla coil. A Tesla coil, famous for its colorful lightning-like discharges, can transmit electrical energy over relatively large distances without wires by using radio frequency oscillations.

Bornhoeft and Cherukuri found that when placed near such a device, single-walled carbon nanotubes – honeycombed sheets of single carbon atoms rolled up into tubes – grow into self-assembled wires.

“It was magic,” Bornhoeft said, describing the first time she witnessed the phenomenon.

“It really is an amazing thing to watch,” Cherukuri said. “Because nothing is connected, and you are just sitting in the middle of the room in front of this coil, and these things start moving, and they start doing all sorts of crazy things.”

After the first time that Bornhoeft saw carbon nanotubes self-assembling in real-time, she was “infected by the nano-bug.” Despite the fact that both she and Cherukuri worked full-time during the day at Chattem, a pharmaceutical company in Chattanooga where they shared an office, they started working every night and weekend exploring what was making this large-scale self-assembly possible.

Rybolt helped procure lab space at UTC for Bornhoeft and Cherukuri when they were first beginning to investigate whether the force field emitted by a Tesla coil could be used to direct self-assembly of carbon nanotubes into functional wires. Cherukuri connected with Rybolt when he decided to teach a nanotechnology seminar class at UTC. After his first semester, Cherukuri told Rybolt that he “had an idea.” Cherukuri had witnessed what he thought was a strange phenomenon when he was a graduate student at Rice University years before, which was carbon nanotubes lining up over very short distances. He wondered if he could take it a step further.

“I told Tom that there was something that had been bothering me, that I’d been experimenting with in my garage for a few years,” Cherukuri said. “I asked him, ‘Do you mind if I bring it over to the university, and really do this for the summer?’ And he said sure. Lindsey and I had an entire standard physical chemistry lab at our disposal.”

Cherukuri first tried to get carbon nanotubes to line-up at larger scales with a Tesla coil he built back when he was only 14 years old. He was frustrated when he turned that first coil on and didn’t see his nanotubes move. But having studied physics in college, he quickly figured out that what he needed to do was to redesign the Tesla coil to create a tunable field. Once he did that, he started to see his now famous chains of carbon nanotubes string together.

Bornhoeft and Cherukuri later demonstrated Teslaphoresis of carbon nanotubes at UTC at even larger scales, their record being a nanotube chain measuring almost a meter in length. The team was using a simplified Tesla coil device that Cherukuri built himself and materials he and Bornhoeft were able to find and use for free from UTC labs. “It was not an expensive research project,” Rybolt said. “It was different in that way.” Only later, when Cherukuri moved back to Rice, was the team able to recruit additional researchers to work out the details of what was happening on a nanoscale level as these carbon nanotubes self-assembled.

Electric Wires that Build Themselves

Bornhoeft and Cherukuri’s carbon nanotube wires are the longest directed self-assembled structures made to date. The wires grow as individual nanotubes are polarized by the field around the Tesla coil, becoming tiny charged tubes that like magnets snap together as the head of one nanotube is attracted to the oppositely charged tail of the next nearest nanotube.

“The physics hidden in this is not just that the Tesla coil generates this strong force field, but that this force field also induces non-uniform fields between the particles,” Cherukuri said. “It’s just like when you’re plugging a cord into the wall, you see a spark jump to the plug, because the field between the plug and the wall is much higher when they get closer. It’s the same thing with two nanotubes. You have a very strong force field that is created between the two, stitching them together. It’s the magic.”

Self-assembly of the carbon nanotubes was only the beginning. In another ground-breaking moment for the project, inspired by a vivid dream Cherukuri had one night about nanotubes flying around in space and landing between two electrodes to complete a circuit, the team discovered that they could use a Tesla coil to power small green and red LED lights floating a liquid mixture of carbon nanotubes. The carbon nanotubes grew into small energy-grabbing antennas that connected both LED lights and lit them up with the energy of the Tesla coil.

“It was beautiful,” Bornhoeft said.

The researchers have many ideas for how the self-assembly process they described in the ACS Nano paper could be applied to complex problems in electronics as well as in medicine. Bornhoeft dreams that these self-assembled nanotubes might one day be used to connect severed nerves, such as in a spinal chord, to rejoin these nerves and restore function. Cherukuri says the idea isn’t as far-fetched as it might seem. A researcher Cherukuri works with at Rice recently published a paper on nerve cell growth using graphene, another carbon-based material, as a scaffold. So the application of self-assembled nanotubes in medicine is likely to emerge in the near future.

“This is such a fun project to be on, because there are so many things that you can do with it,” Bornhoeft said. “There are so many discoveries that are there to be made. I think we are just touching the surface.”

2 Comments » for Self-assembling Carbon Nanotubes: A Story that Tells Itself