Above it all, a 120-foot crane slowly and silently spins, lifting equipment and supplies off the ground, delivering them six to nine floors up.

Construction is nonstop at the site of the new West Campus Housing, located at the corner of Vine and Houston Streets. Due to open in Fall 2018, the structural elements of the $70 million facility — walls, floors and ceilings — are 90 percent done, says Jeremy Busby, job superintendent for Hoar Construction Co., the building contractor.

West Campus is a massive job, he says, with about 200 workers — all in fluorescent yellow vests and hardhats — swarming over it on any given day. When finished, it will flesh out about 231,000 square feet.

“This is a hoss,” he says. “It’s a simple building construction-wise, but this is a big building.” 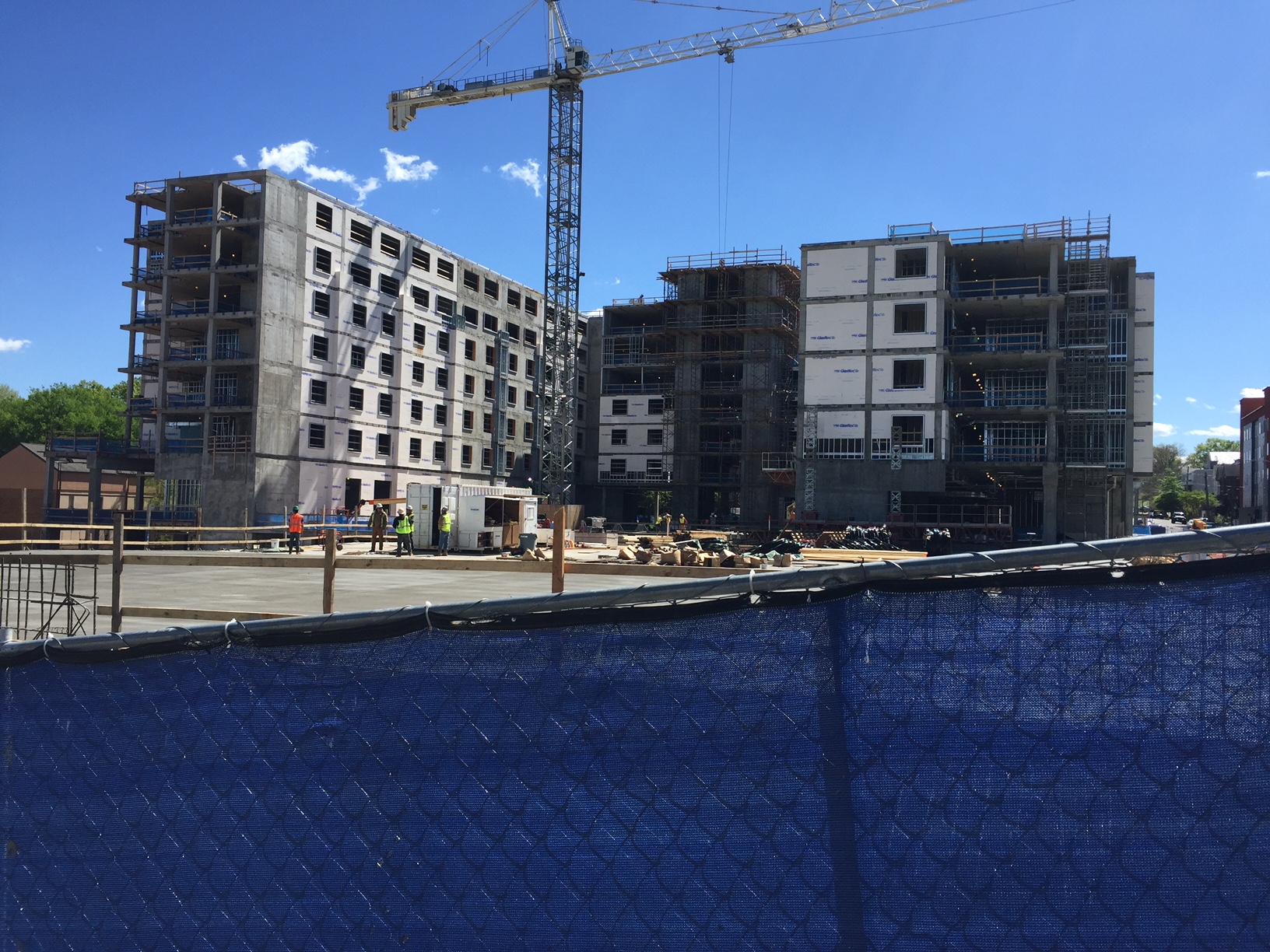 West Campus Housing will have 600 beds when finished.

On Saturday, the last bit of concrete was poured on the East Wing’s ninth floor, the so-called “topping out” of the building. Barring any monsoon-like rains that last for a week, they should be able to hit the opening-day mark, Busby says.

The design of the residential floors is “cookie cutter,” he says, each an exact copy of the others, making it easier to build since they’re all on the same template.

When finished, West Campus will have 600 beds, four in each two-bedroom suite. Each suite has a private bathroom and shower and a common area where students can relax and watch TV if they have one.

The floors also have larger, centrally located common areas as well as triangular ones on the four corners of each. Glass-enclosed and lit from the inside, they’ve been nicknamed “Lanterns.”

The feeling of a community on each floor as well as inside the building as a whole is intentional, says Dee Dee Anderson, interim vice chancellor for student development. While UTC has many living spaces on campus, they’re apartment-style, which tends to isolate students instead of bringing them together. West Campus fills a need for “traditional-style housing” on campus, she says.

That’s even more important since the building will be housing mostly freshmen, she says.

“We want to create an environment that gets them engaged on campus, where they can meet their classmates and begin that process of becoming part of the community and becoming a Moc,” Anderson says.

During a tour last week of several floors, Busby points out various details of construction. Metal-stud walls, plumbing and heating/air conditioning ducts are in place on several of the lower floors, while upper floors are mostly wide open, metal wall studs laying in piles on the concrete floors.

The lobby inside the building’s front entrance will have a small Barnes and Noble bookstore and an Einstein Bagels with other storefronts being discussed and pursued.

Underneath the building are two underground parking lots with a total of 446 spaces. Located next to McKenzie Arena, six tennis courts and a tennis center with locker rooms also will be part of the West Campus complex but open to all students.