Lauren Solomon didn’t know she could yell like that.

As coxswain for the Women’s Novice 4+ Rowing team at UTC, her job is not only to steer the boat in a straight line but also to motivate the four rowers with intense — sometimes downright loud —  instructions and encouragement. And if another boat gets in the way during a race, she’ll yell at it, too, telling it to get the heck out of the way (no cussing allowed). Sometimes, though, the other boat doesn’t listen.

In the recent semifinals for the Southern Intercollegiate Rowing Association, the team was stroking up a storm, pushing hard enough to catch a boat that had started about 30 or so seconds before UTC. The sportsmanlike thing to do in such situations is for the first boat to move over.

The other boat wasn’t being a good sport.

“This coxswain would not move the boat and it was jeopardizing our time,” Solomon says, a note of exasperation still in her voice. “About the 30th time that I said, ‘Coxswain, move over!’, that’s when it became a demon sound.”

Despite the competitor’s rudeness, the UTC team did well enough to earn a third-place medal and qualify for the American Collegiate Rowing Association Championships. Next weekend, the UTC team — Solomon, Olivia Been, Madison Compton, Elizabeth Plunk and Alexandra Basar — will be among a dozen or more women’s novice teams hitting the water at Lake Lanier in Gainesville, Ga. The “Novice” category is for first-year rowers. 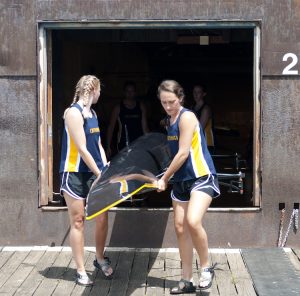 The races are 2K, about 1.2 miles. But whether they’re in competition or just practicing, team members use one adjective to describe that 1.2 miles.

Team member Laurel Jobe holds up her right hand, showing callouses running in thick dots just below her fingers. She’s been rowing since her junior year at her Nashville high school.

“It’s a painful process to go through,” she says. “A lot of people think that rowing is just an arm sport. It’s your whole body.

“But knowing that you are with a team and you’re racing as a team — it’s not an individual sport whatsoever — it definitely makes you want to work harder.”

Unfortunately, Jobe won’t be participating in the championships. Before the rowing team qualified, she had signed up for a summer program studying coral reef ecology and conservation off the Caribbean island of Bonaire. Jobe, who’s majoring in environmental science, already booked and paid for her travel arrangements before the team made it to the finals.

But for Jobe and the rest of the team, pushing through the pain is critical in every race and practice.

“The bonds that form between them as they race and practice” — 6 a.m. every day and another in the afternoon — “helps rally them through the suffering,” says Solomon, a major in biology and anthropology.

The team’s suffering hurts her, too, she says, but not in the same exact way.

“Something that’s been really challenging is knowing that they are giving their all and what they are doing is extremely painful and telling them to do more,” she says. 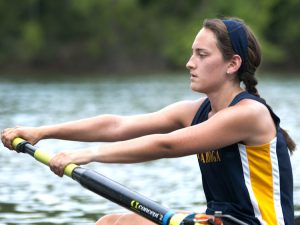 “My goal is to keep them their nerves down … if they push as hard as they can then they’ve done their best and that’s something to be proud of,” she says.

Just being on the rowing team has helped a couple of members make life-altering decisions. Been, for instance, was having a rough time adjusting during fall semester 2016 and “had every intention of not staying at UTC.”

“But rowing picked me up and I made a lot of good friends so I stayed,” she says.

Jobe had the same experience, thinking about leaving and heading back home.

“This team has made me realize that I can be happy here,” she says.