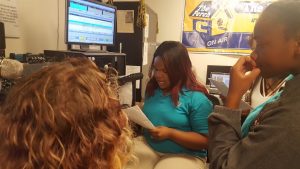 CGLA student Candace Jones, center, is one of the hosts of the DEA Public Health Radio, a show broadcast on The Perch, UTC’s online station.

The bullying started when she was about six years old, taunts like “fat cheeseburger” and worse.

“No one ever wanted to sit next to me, especially in the cafeteria,” recalls Candace Jones, a rising senior at Chattanooga Girls Leadership Academy. “It was tough to get through that loneliness, not having anyone besides an empty chair.”

“When I got into the third or fourth grade, I was what you basically would call an ‘outcast.’ There were times when the teacher would have to force someone to work with me,” she says, her voice cracking with the pain of memory. But she quickly gets her emotions under control and continues.

Candace relayed her story about bullying on DEA Public Health Radio, a program on The Perch.com, UTC’s online radio station. She and another CGLA student, Brynija Loyd, ran the program, which aired Wednesdays from 4-5 p.m. over the fall and spring semesters.

“To hear the young lady get emotional but be able to recover, to find her strength in the same few moments is a testament to how strong our young women are and how important this topic is and our responsibility to talk about it,” says Nicole Brown, academic adviser and co-director of internships in the Department of Communications and producer of the radio program.

DEA Public Health Radio is scheduled to crank back up in August or September and be produced by Dr. Shewanee Howard-Baptiste, assistant professor in exercise science in the  Department of Health and Human Performance.

Topics over the course of the 19 previous episodes included bullying, body image, suicide awareness and rape prevention, among others. In short, the three CGLA students focused on topics that “are germane to them,” says Dr. Elgin Andrews, assistant professor in exercise science in Health and Human Performance and host of DEA Public Health Radio.

But there are other goals beyond spreading information that’s useful in the daily lives of high-school girls, he says. One is to bring local high school students to UTC “and let them see the campus,” he says. The second involves UTC itself.

“The second was to let everyone at UTC see what’s going on in the community and not to shelter within the sanctuary,” Andrews says. “We want them to see outside the walls, try to connect them to the community also.

“That duality is something we also want to accomplish.”

Right now, program officials are trying to attract students by reaching out to various high schools. The same outreach took place last year, Brown says, but CGLA was the only school that came onboard.

Whoever joins, they’ll be responsible for coming up with the topics, questions and contacting experts to be interview for each show.

“They were required to locate a guest speaker, contact them and come up with questions to ask,” says Kala Nunley, who received her master’s degree in physical activity and health in May and was the UTC liaison with CGLA for the radio program.

Candace joined because she wanted to explore the ins and outs of journalism, a career she may pursue in college. And she got what she was seeking, from learning the steps involved in producing a journalistic piece, conducting live interviews and coming up with story ideas.

Lauren Thomas, who acted as liaison between CGLA and UTC, calls the experience “fantastic.”

“Dr. Elgin Andrews’ idea of getting high schoolers to speak up about ‘hot’ current health issues pertinent to their generation was brilliant,” she says. “Not only did it provide the students an avenue to think critically and improve their public speaking, it also allowed them exposure to a college campus and various health care professions.”

Students also run the technical side of the radio broadcast, something that STEM schools (Science, Technology, Engineering and Math) should be especially interested, Brown says.

“They forget that radio is a form of technology. We’re offering an alternative version for their students,” she says. “This is a great opportunity for a recruitment tool for UTC to get those outstanding STEM students.”

But for all students, there are multiple elements that make the program valuable, she adds.

“This is better than ‘Saturday Night Live’; this is CGLA Live.”