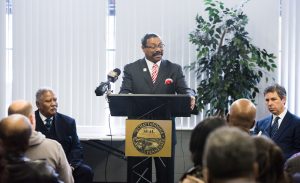 Dr. Richard Brown of UTC speaks at the dedication of James R. Mapp Street in honor of the civil rights icon. On the left is the Rev. Blevins Saxton III of Orchard Knob Baptist Church; on the right is Chattanooga Mayor Andy Berke.

When civil rights icon James R. Mapp was unhappy with you, he let you know in a very specific way.

“When he called you by your whole name, you knew you were in trouble,” said Dr. Richard Brown, executive vice chancellor of finance and administration at UTC.

Brown offered that nugget of information during his remarks today at the dedication of James R. Mapp Street, formerly University Street on the UTC campus. Mapp’s insurance/real estate office once sat at the corner of University Street and Martin Luther King Boulevard.

During the dedication ceremony, which took place in the NAACP headquarters on MLK Boulevard, Brown described Mapp, who died in 2015 at age 87, as “the moral compass of the community, improving the lives of all of us.”

“He was a man who dedicated his entire life to really serving others,” Brown said. “The last words he told me were, ‘Richard, you must help others to finish the work.’”

“I think the naming of this street also helps us to start that process to finish the great work he started.”

The naming of James R. Mapp Street is the second time UTC has honored Mapp, who served 16 years as president of the Chattanooga chapter of the NAACP.

In 2016, the University rededicated the James R. Mapp Building to honor him.

At today’s dedication of James R. Mapp Street, Chattanooga Mayor Andy Berke described Mapp as “a man who was immensely courteous and polite but never confused that with softness or weakness.”

“We owe him an eternal debt of gratitude,” Berke said.