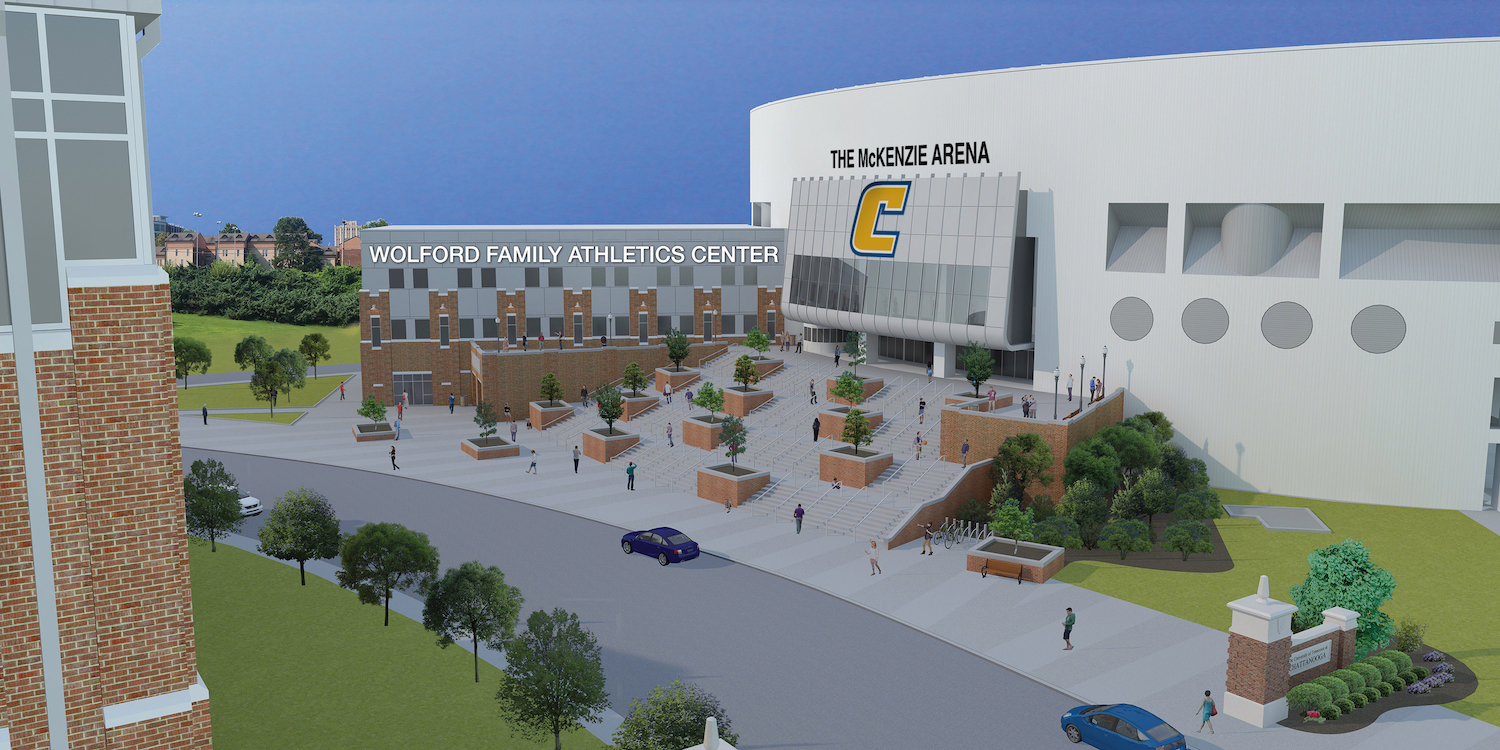 The Wolford Family Athletics Center will be attached to McKenzie Arena.

University of Tennessee at Chattanooga Chancellor Dr. Steven Angle has announced that a financial plan is now in place to start construction on the Wolford Family Athletics Center, a 70,000-square-foot addition and renovation to McKenzie Arena.

The announcement came at Saturday during the Spring Showcase at Finley Stadium.

The new addition will be named in memory of James “Bucky” Wolford, an All-American defensive back for the Mocs from 1966-69. Inducted into the UTC Athletics Hall of Fame in 1989, Wolford’s 13 career interceptions are tied for the school record.  He also led the Mocs with 852 rushing yards during a 9-1 campaign in 1968.  He passed away on Sept. 1 of last year.

Progress towards the completion of the Wolford Family Athletics Center has been made possible through the contributions of many key people. Lead donors include Charles and Bernita Cofield, Diane and Bucky Wolford, Hamico Foundation, the UC Foundation and John Murphy and Renee Haugerud.

“The generosity of the Wolford family and all of the donors who have helped make this possible is sincerely appreciated,” Angle said.  “We would not be here without the help and partnership of John ‘Thunder’ Thornton, who worked tirelessly to ensure we were successful.  Many supporters were inspired by Bucky Wolford who defines what it means to be a Moc.

“Bucky had a profound impact on UTC as a student, a UT Board of Trustee member, a UC Foundation Board member, an advisor to several chancellors, and a supporter of our athletic programs.  Naming our new athletic facility in honor of the Wolford Family will serve as an inspiration for both current and future Mocs.”

The Wolford Family Athletics Center is a 35,000-square-foot addition that will house a new sports medicine area and a state-of-the-art hydrotherapy section, along with team meeting and classroom space for use by all student-athletes at UTC. The plans also call for a new football locker room, coaches’ offices and meeting rooms to go with a university-wide multi-purpose space.  The building will connect to McKenzie Arena between Gate 1 and the main loading ramp off the corner of Fifth and Mabel streets.

The project also includes a renovation of 35,000 square feet of space inside McKenzie Arena, Angle said, an area that includes new locker rooms for the men’s and women’s basketball programs, as well as updated working spaces for the athletics staff and coaches who are housed in the Arena.

“A facility of this stature will impact our entire athletics program,” stated Vice Chancellor and Director of Athletics Mark Wharton. “Not only does it give new areas for our football and athletic training programs, it frees up additional space we currently use every day in McKenzie Arena.  It is exciting to know that the vision of this asset to our University is becoming a reality.”

The areas vacated by staff moving into the new building will be renovated, allowing the remaining coaches and staff to expand into virtually new offices and meeting spaces inside the existing structure of the arena.

“One of Chattanooga’s greatest needs within our football program is a new facility,” said UTC football head coach Tom Arth. “It is so exciting to know that plans are in place and that the project will be underway very soon.

“The facility will make such an incredible difference in the experience of our student-athletes and the overall efficiency of our program.  In addition, the building will also help us create an even greater edge in recruiting top-level high school prospects.

“As exciting and important as these things are, what makes this facility so special is knowing that it will be named for Bucky Wolford,” Arth said. “Bucky and his family have impacted our university, community and football program in remarkable ways.  For our players, coaches and staff to know that the place where we go to work each day is named for one of the greatest men and football players to graduate from Chattanooga is incredibly inspiring and humbling.

“It will surely be a beautiful, state-of-the-art facility that represents hallowed ground for all of us each time we enter its doors.”

Further information on the exact layout, as well as the formal groundbreaking date, will be announced when that phase of the building process approaches, said Wharton. 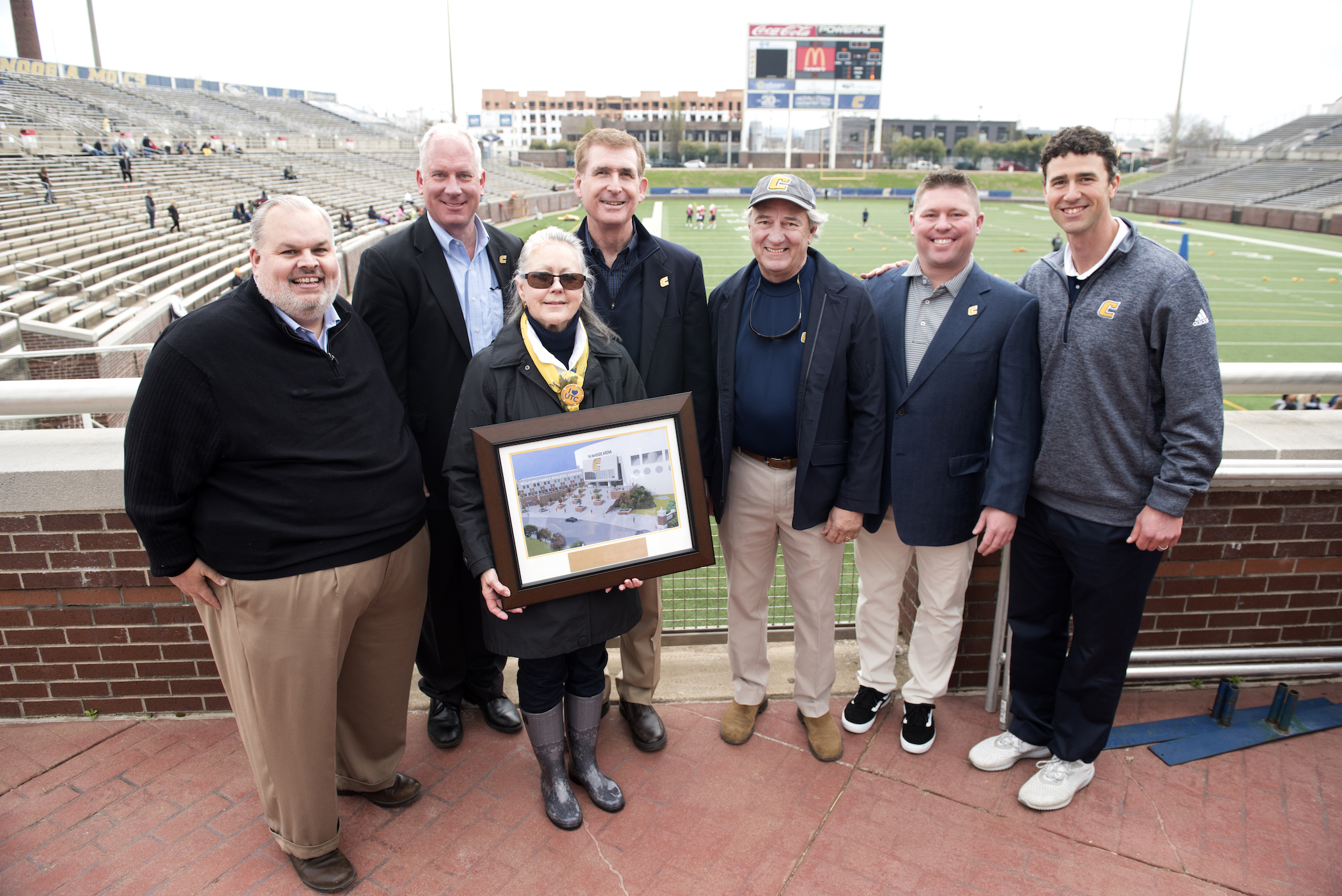