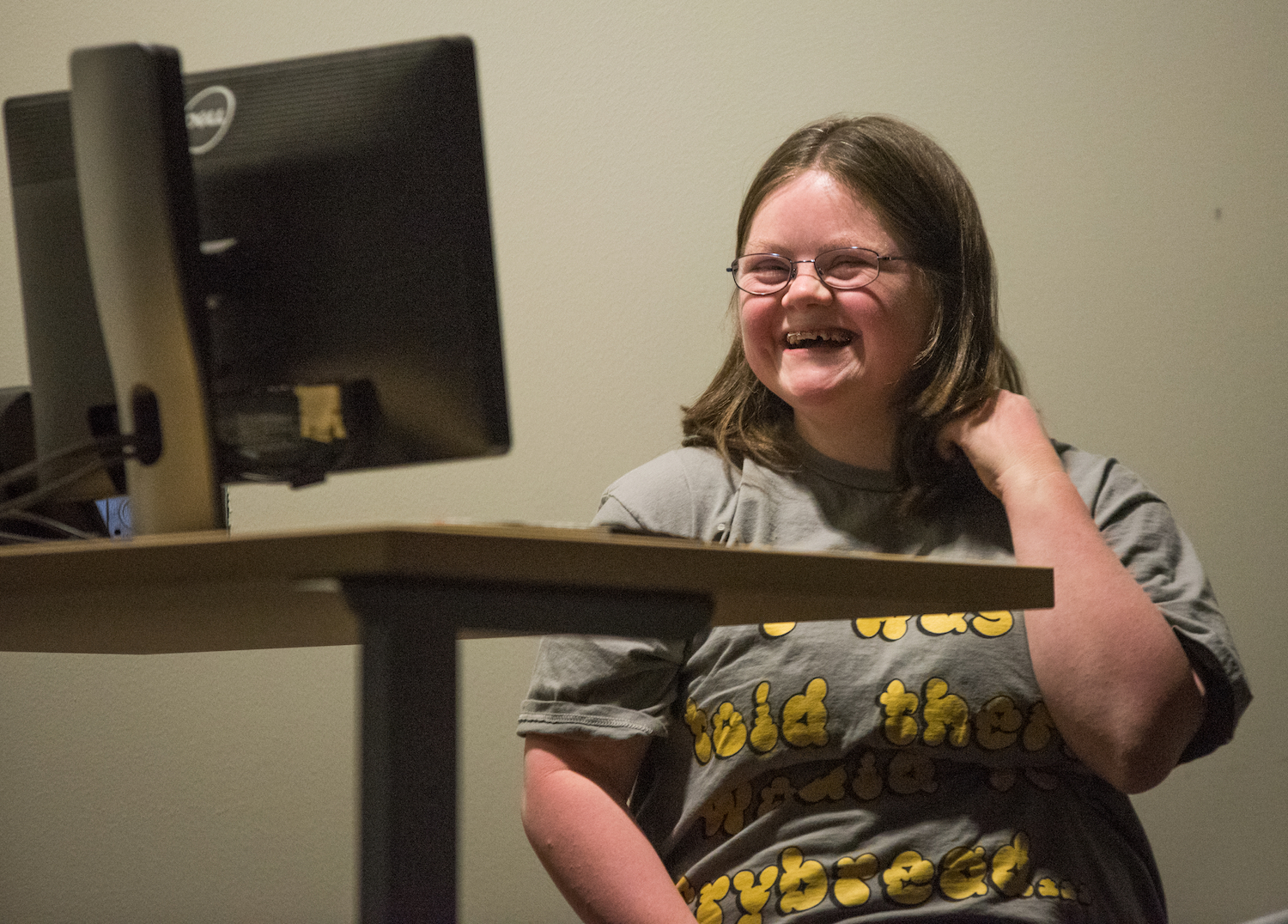 Parker Davis has been taking a combination of credit and non-credit courses at UTC.

Parker Davis fiddles with her hair, tucking it behind her ears to get it out of the way. It doesn’t stay.

She smooths her T-shirt, making sure it hangs comfortably. A finger poke to the bridge of her glasses and they’re sitting just right.

Everything in place to her satisfaction, she steps up to the computer and starts tapping keys, firing up her PowerPoint presentation.

Standing in the UTC Library’s first-floor theater, Parker deftly runs through slides about Smoke Signals, a 1998 comedy she’s dissecting for her American Independent Cinema class. The movie has a Native American writer, director and actors and “explores the nature of Native American stereotypes in popular cinema by both seriously challenging them and humorously poking fun at them,” she says, repeating a line that appears in her PowerPoint.

In the film, Native American “fry bread” is described in manna-from-heaven terms, she notes, then turns to the other students and points to the words on her T-shirt: “I was told there would be frybread.”

“My mother found this shirt,” she says, her face decorated by an enormous smile as the others laugh.

Confidence is not something the 22-year-old Parker lacks. She’s the only student at UTC with Down syndrome, but its limitations are simply things for her to overcome, not hold her back. Although she usually has someone with her while she’s on campus, she’s unafraid to go it alone. Friends, family and teachers say she loves to learn, studies religiously, turns her assignments in on time and has an active on-campus social life.

Earbuds in, smartphone in hand, she walks across campus like any other student, and her outgoing personality — one friend calls her “sassy” — has made her a favorite with those who have met her.

“Oh, she’s always the highlight of my week, no matter when she comes in. I’m just always so glad to see her,” says Deardra McGee, academic exploration advisor in the UTC Center for Advisement.

“It’s been a joy to teach her. I wish all my students were as diligent as she is.”

In Parker’s mind, there was virtually no question that, after graduating from Signal Mountain High School in 2015, college was in her future. So she approached her parents, Lee and Heather.

And she has proven that she can, says her father, local attorney Lee Davis.

“We wanted to make sure this was not about us,” he adds. “Parker could take classes and be able to complete them like other students — certainly with modifications because of her ability — but it’s got to be her best work and it’s got to be about her interests.

“This is Parker’s journey; it’s not ours.”

To start the journey, he headed to UTC with her school records from Signal Mountain plus letters of recommendation from her teachers, making sure she was eligible for enrollment. She was. From there, they worked with school administrators and advisors to get her ready, he says, singing the praises of UTC staff.

“We’ve not had anyone who has been less than wonderfully supportive,” he says. “It really has been amazing. We were blown away.”

“Her personality just bowled me over the first time I met her,” she says.

Each semester, McGee helps Parker pick her classes, but says Parker “leads the meeting,” taking charge of her future.

“I think, ‘Why can’t everyone be like that?’” McGee adds.

Taylor Downey was a freshman when she met Parker in a Theatre 101 class. They struck up a friendship and now Downey is a friend, tutor and near-constant companion for Parker on campus.

“She is so fun-loving. She loves everything that she does; she loves the people she’s around; she cares about what’s going on in people’s lives,” Downey says. “She’s the first one to ask me how I’m doing.”

It’s not all sweetness and light, though, because Parker has a touch of the smart-aleck.

Beyond friendship, Parker has had an even deeper effect on Downey, a junior who says her ultimate goal is to be an occupational therapist working with special-needs kids.

“And that’s all because of Parker.” 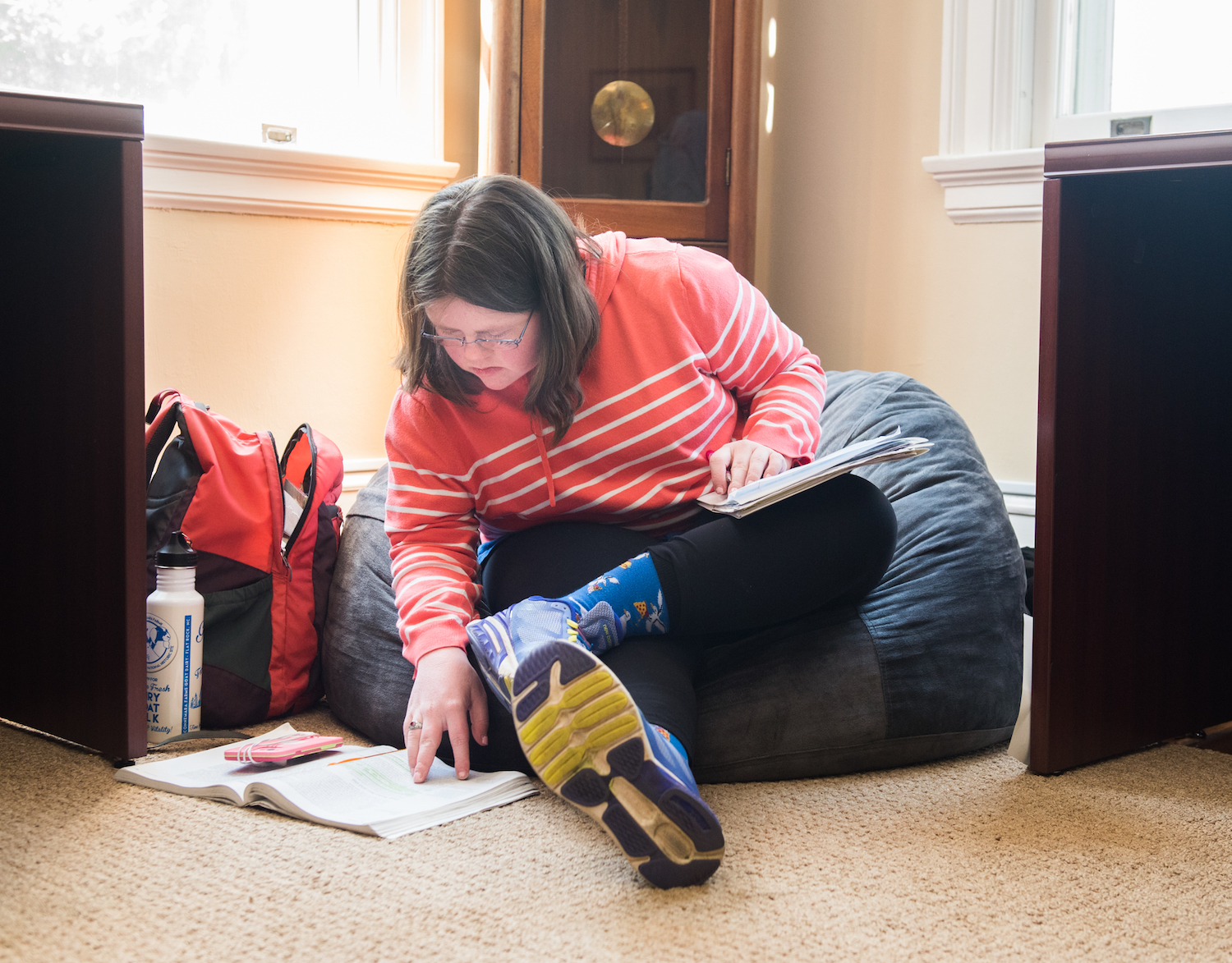 In the afternoon, Parker Davis goes to the law offices of her father, Lee Davis, to study.

As part of the learning process before Parker started school, the Davises took a special education training program to help them get organized. They also lined up other students to accompany Parker to class and help her acclimate to college.

“Like all great plans, it worked for two days and, on day three, one of the aides called in sick,” her father says. “And I asked, ‘Parker do you remember how to get to your classes? Do you think you can do it on your own?’”

While he admits he took “a big swallow” when she headed out, “it worked fine and, since then, she has navigated campus.”

Still, it’s not like they open the door and let Parker just waltz out, he stresses. She has the Strava app on her smartphone, which allows them to know where she is through satellite GPS. The front entrance of the University Center is always the spot where she waits if anyone is looking for her or is scheduled to pick her up.

On Thursday nights, she meets with friends in the Christian campus group Cru and hangs out for the evening.

“That has become the hub of Parker’s week,” her father says. “She loves it and the only downside is that it requires her dad to drive back to campus at 9:45 at night.”

Quite a haul from their home in Walden on Signal Mountain.

In her six semesters at UTC, Parker has taken a combination of credit and noncredit courses.

“It’s fun to learn about stuff,” she explains.

So far, that stuff has included credit courses such as Cultural Geography, Spanish, American Cinema, Theatre and Legal Assistant Studies along with non-credit classes, most of which focus on physical activity because low muscle tone is a common ailment for those with Down syndrome.

She works mornings and afternoons in her father’s law office on Fortwood Street, a stately brick home sitting just a block off-campus. Before school, she files, answers phones and does other clerk duties; after classes she comes back to study.

In the downstairs room where the office’s administrative staff works, she has a blue beanbag chair in a corner where, with notebooks, textbooks and pens on the floor around her, she does her daily studying and coursework. Upstairs on the third floor is Parker’s Perch, a room where she can go for some quiet study or to rest. 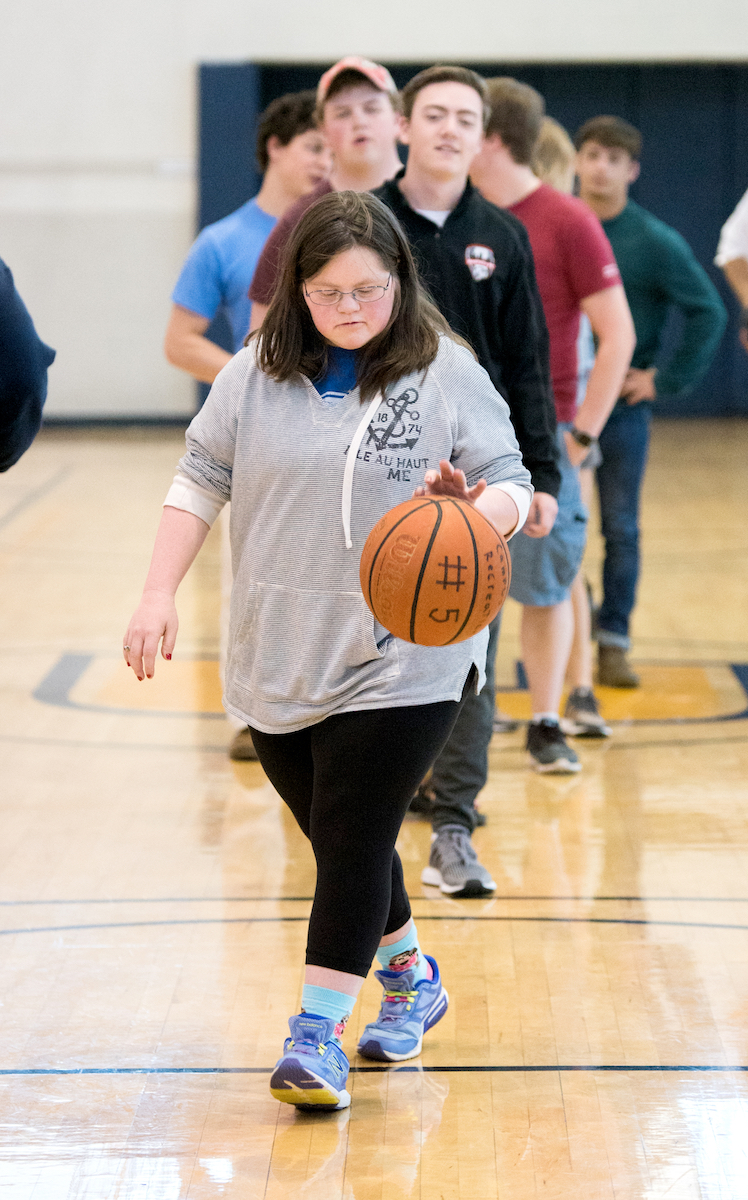 Lack of muscle tone is a problem for those with Down syndrome, so Parker usually takes one physical activity course each semester.

Parker says she has a tentative goal of earning a diploma at UTC but admits “I’m still on the road to that thing.”

Downey describes Parker as “hardworking and intrinsically motivated, knows what she wants” and is determined to get there, wherever it leads.

“I think that Parker is going to continue be educated, to go where she wants to go, whether she’s degree-seeking or just continuing to take classes.”

Ultimately, the decision on whether to continue at college is Parker’s, her father says.

“We don’t have a specific goal. I couldn’t tell you whether Parker is capable of eventually earning a degree or not,” he says. “She’s done extremely well in those classes, but as far as when they become more complex and difficult, I don’t know if that’s possible.

“Rather than put an artificial goal on it like a diploma, our idea is that we’re going to support it as long as it’s something that Parker wants to do and she can do with appropriate support. But it’s her work.”

While a student at Signal Mountain High, Parker had a certain picture in her mind of what college would be like. Kind of similar to high school, she figured.

“But I like going to college better,” she says.

It’s not just the classes or the friendships; it’s the challenges, the sense of accomplishment and pride that goes along, she says. Besides, the between-class bells drove her nuts in high school.

“We had these alarms that would go so crazy because they’d go off all the time. So loud,” she recalls. “But here they don’t have alarms; you just keep an eye on the clock.”