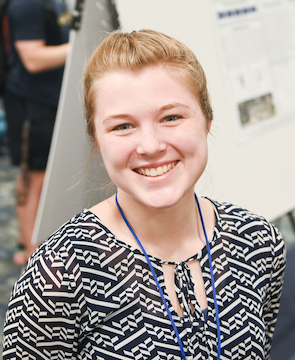 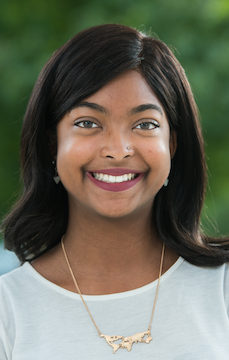 Two Honors College students have received two of the most prestigious awards in the country.

Each year, the Student Program picks about 1,900 recipients to travel around the world to improve relationships and cultural understanding between the U.S. and other countries.

Olivia George was chosen for the National Science Foundation Graduate Research Fellowship Program. The highly competitive and acclaimed fellowship is awarded to outstanding students in the STEM (Science, Technology Engineering and Mathematics) fields for graduate study. It gives George a three-year stipend of $34,000 a year for graduate school as well as $12,000 a year toward the school of her choice, with all tuition and fees waived.

“Who wins nationally competitive scholarships and fellowships offers one indication of a university’s overall academic excellence,” says Honors College Dean Linda Frost. “Students who win them are one answer to the question: Are our students nationally competitive on the academic scene? This year, the answer is a resounding ‘Yes.’ UTC’s students are doing just fine.”

Edwards, who graduated this month with a degree in political science, is traveling to Guatemala where she will spend a year teaching English. She will receive a stipend while living in the Central American country.

“I’m just really grateful,” she says. “It’s only because of God’s many blessings that I was able to be awarded such a prestigious award. I’m also grateful to everyone who believed in me when I didn’t believe in myself, especially Leslie Pusey in the Office of National Scholarships. I’m excited to get started!”

Former Fulbright Scholars include 59 Nobel Laureates, 82 Pulitzer Prize winners and 16 Presidential Medal of Freedom recipients as well as students who have gone on to be heads of state, judges, ambassadors, CEOs, and university presidents.

“Your selection for a Fulbright award is an achievement for which you can be justly proud,” program officials told Edwards in her acceptance letter. “Fulbright is the world’s largest and most diverse international educational exchange program. As a grantee, you will join the ranks of distinguished participants in the program.”

George, who graduated this month with a degree in chemical engineering, plans to attend Georgia Tech to pursue her Ph.D. in materials science and engineering, focusing on nanotechnology research.

“My research interests range from biomedical nanomaterials—which is what I have been research here at UTC under the direction of Dr. Soubantika Palchoudhury—to clean energy to material structures and developing novel materials to have useful, tailored properties on both the nano and the macro scales,” George says.

A major in political science and public service with a focus in international relations/comparative politics, she earned the Critical Language Scholarship award from the U.S. Department of State to study the Korean language. Students who receive the scholarship apply their learned skills in their professional careers.

A major in biochemistry and president of the Honors College Council, she was accepted to the Amgen Scholars Program at the National Institutes of Health in Washington, D.C. Students spend 10 weeks at the NIH, performing research while working with other Amgen Scholars to learn about health disparities and develop leadership skills.

A psychology major, she has been offered a teaching assistant position at Education University in Hong Kong through the Princeton in Asia Fellowship. For more than a century, Princeton in Asia has offered fellowships focused on education, public health, environmental sustainability, economic development and social justice.

A mechanical engineering major, he landed a research Internship with the Army Aviation Development Directorate (ADD) at the NASA Ames Research Center in Silicon Valley, California. He will participate in hands-on research, investigating real-life practical engineering problems such as rotary-wing vehicles and computational fluid dynamics.