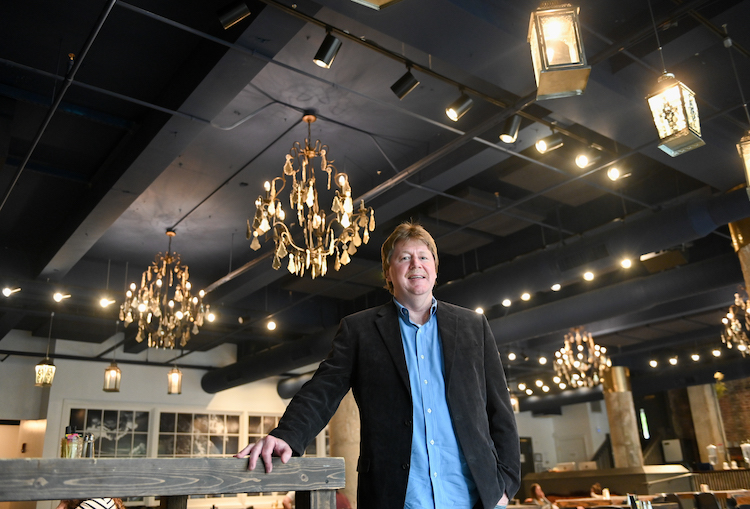 Brock Kolls graduated from UTC in 1991 with a degree in electrical engineering.

The project was so secret, Brock Kolls couldn’t even tell his family.

“We had signed confidentiality agreements inside the company to not even talk about the project with other employees. So a lot of people didn’t even know,” recalls Kolls, a 1991 UTC graduate in electrical engineering.

That might sound a bit over-the-top and dramatic since the project was just a new machine to dispense soft drinks at movie theaters, restaurants and the like. Truth is, though, it wasn’t just another machine that squirts Coke or Sprite or Mello Yello into a cup. It was the one that wows you the first time you use it. A touchscreen is dotted with circular icons for various soft drinks. Press one, let it squirt into your cup for a moment, then stop it and put in another flavor … and another … and another. It has the ability to make 100 different flavor combinations.

They call it the Coca-Cola Freestyle and, since debuting in 2009, it has revolutionized soft-drink dispensing. In Chattanooga, you can find it in AMC Theatres, Zaxby’s, Five Guys Burgers and Fries, Burger King and Moe’s Southwest Grill, among others. Nationwide, there now are about 50,000 dispensers pouring 14 million drinks per day. “It took about 18 months in order to get the prototype together. It had a great design challenge,” says Kolls, who helped lead the research and development team that designed the Freestyle.

“If you remember, they did the boxes of (soft drink) syrup and each box was roughly about a cubic foot. And they had figured out that, in order to dispense 100 drinks, they needed 44 different ingredients. So our challenge was to take 44 cubic feet of liquid and get it into 44 cubic inches of space because that’s what it took in order to be able to mix all the syrups and the drinks in there and everything. Awesome challenge.”

With great secrecy, the first working prototype was put in a Mexican food-style restaurant in downtown Atlanta, he says. Still working under his confidentiality agreement, Kolls couldn’t even tell his wife and kids. “My family didn’t even know it was there until I told them that, ‘Hey, we’re going to go have dinner tonight at a new Mexican restaurant,’ you know?” he recalls.

After moving to Atlanta to work with Coke in 2007, Kolls remained and now is president and CEO of Gr8BigIdeas and its website, TechConnectHub.com. Describing himself as a “serial entrepreneur,” he has worked with Coke as well as such companies as Wells Fargo and USA Technologies, among others, and is a registered U.S. patent agent with more than 85 patents as an inventor.

“You’re patenting ideas,” he explains. “They really break them into two categories. One is that they’ve either been reduced to practice, meaning that they’ve actually been physically built, or it’s just a construction on paper of what could be possible. And you can patent both.

“I think a lot of times with these innovations, your mind and your pencil can run much faster than the engineers can build the ideas. So it’s perfectly normal to be maybe thinking about Generation Two and Three while you’re perfecting Generation One. And it also gives an opportunity for ideas to evolve over time, where you’ve tried things, and think of new things, and that type of thing.”

Filing for patents is an offshoot of his larger business, which is connecting large corporations with inventors and innovators, a task that sometimes involves working with companies that are in the early stages of creating themselves.

“I’ve positioned myself right in the center to help big companies be able to access and connect with the young talent that they’re trying to get to in the community. Connecting companies with each other revolves around three categories, he explains: Talent, knowledge and solutions.

“It’s either around talent where they’re looking for a specific talent to come in through an intern program, to work on some sort of technical challenge,” he says. “It could be building an app, could be solving a problem, could be writing algorithms for a health care company. It could be all sorts of different things, but ultimately they’re looking for talent.

“The other is they’re looking for knowledge. It means that they might be an industry and they’re very interested in how this particular technology— like artificial intelligence or blockchain—is going to change their industry, and they would like to get ahead of it. They want to find people who are researching these areas, who have knowledge of these areas, and bring them in for workshops and for the executives to interact with so you can bring knowledge into the company about new technologies

“Or it’s about solutions. They’ve got a particular need; they’re looking for particular technology; and they want to find somebody who’s already been there and done that, that they can move quickly to commercialization on.”

“The startup community is emerging here in Chattanooga incredibly fast, right? There are a lot of companies trying to understand exactly how to engage. They are asking such questions as: ‘How do I explain what I need them to do? How do I bring that technology into my company?’” he says. “I’ve focused these last four or five years on just that subject matter. Just helping big companies access talent in the startup community.”

But not everyone quite understands what he does. Not even those closest to him.

“Like my parents said, ‘Is that a real job? I thought you went to school for engineering.’”