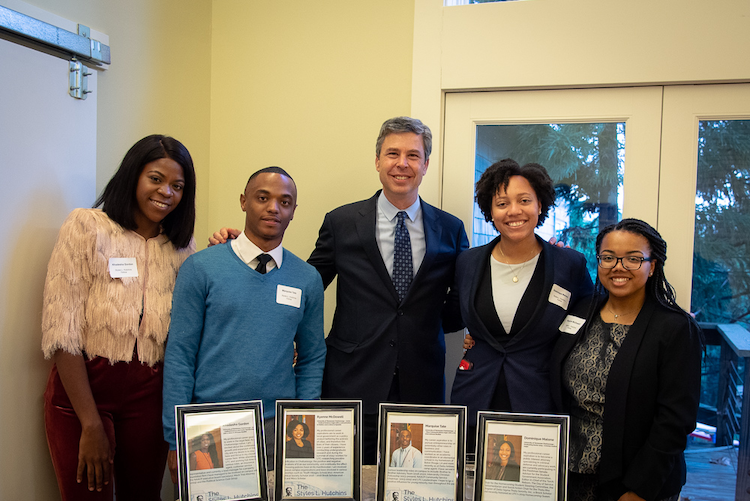 Who is Styles L. Hutchins?

Styles L. Hutchins was an educator, attorney, politician, entrepreneur and minister in the late 1800s and early 1900s. He was born in Georgia in 1852 and was the first African American admitted to the state bar association.

In 1881, when he was in his early 20s, he moved to Chattanooga. During his time in the city, he opened and ran his own law practice and was elected to a single term in the Tennessee State legislature in 1886.

He also helped start and edit the first city newspaper owned and operated solely by African American men—The Independent Age. In 1901, he was ordained as a minister in the United Brethren in Christ.

Out of 33 black students who graduated from the University of Tennessee at Chattanooga between August 2017 and December 2018, 19—or 58 percent—said they landed a job in Chattanooga.

In comparison, during those same months, 277 of 425 white graduates and 15 of 23 Hispanic graduates reported working in Chattanooga. Both of those percentages are 65 percent.

The numbers were pulled from a survey conducted by the UTC Office of Planning, Evaluation and Institutional Research to gather students’ post-graduation information such as employment status. Not all graduates responded to the survey.

While the difference between black graduate retention rate and the others isn’t enormous, the numbers are troubling to many in Chattanooga, including the office of Mayor Andy Berke and the administration at UTC. Too many black graduates are leaving Chattanooga for a number of reasons, officials say, including lack of employment opportunities and not feeling as if they’re welcome here or having their voices heard.

In March, UTC students sat down with Berke and others to discuss the issues that graduating black students face in Chattanooga.

“We discussed the cultural aspects of our city and how we felt that the black voice was missing,” said Dominique Malone, a senior in criminal justice who was in the group of students. “I have had trouble finding a sense of belonging in any job opportunity in the city.

“Moreover, we suggested that, with the rise of tourism in Chattanooga, the commercial goal has not been centered around appealing to many black students and residents who are in the very city,” added Malone, former president of the Black Student Alliance at UTC.

To address those concerns, the Styles L. Hutchins Fellowship was created. A collaboration between UTC, the mayor’s office, the Chattanooga Chamber of Commerce and the Urban League of Greater Chattanooga, its goal is to give black graduates more reasons to stay in Chattanooga.

Four undergraduate UTC students—Malone, Khadesha Gordon, Ryenne McDowell and Marquise Tate—were asked to answer those questions and give suggestions on how to solve them.

“They were juniors and seniors who were preparing to go into the final steps of preparing for life after college and get them to interpret the college student perspective on how they view Chattanooga and what would make it more attractive career-wise, financially, culturally and personally. That way they could see themselves staying here,” says Christopher Stokes, assistant director of the UTC Department of Multicultural Affairs.

UTC Chancellor Steven Angle describes the fellowship as “an exciting way for the community to attract, develop, and ultimately retain more students of color — a good thing for those students and for the organizations that will employ them.

“We are grateful to the program’s founding partners for making this investment in our talented students and in the community,” he says.

To be selected for the fellowship, the students had to apply and go through an intensive interview process that included presentations to people from the city, Chamber of Commerce, Urban League and local businesses, including Unum and BlueCross BlueShield. They now are researching and crunching both citywide and university data on black graduate retention, including where they choose to live and work after graduation as well as perceptions on whether the city offers enough places and opportunities for black graduates to socialize with peers.

“I said, ‘It would be up to you to analyze this data, review the research and then come in and kind of tell us what your initial thinking is about changing these perceptions and what some of the challenges are,” said Johnson.

Along with their research, the students are attending professional development sessions with various movers and shakers in Chattanooga to help them learn, among other things, government operations, policy-making, communications techniques, project management and data utilization.

The students are being paid $15 an hour for 16 weeks of part-time work, plus up to $400 for travel and professional development reimbursement. At the end of the 16 weeks, with all the new information they’ve learned and analyzed data in hand, they must present suggestions on how to improve those situations to the same people who selected them for the fellowship.

“We’re not going to tell them, they need to tell us,” Johnson says. “When we produce this final report with findings and also recommendations, we can say to companies: Here’s how these top companies are retaining diverse talent.”

Convincing black graduates to remain in Chattanooga will not only improve the city’s workforce, it will increase diversity in it, both Johnson and Stokes said.

“Keeping a strong, quality workforce is a priority—and especially a diverse workforce—because we know diversity adds value to any organization, and our mayor’s really passionate about ensuring diversity and inclusion for our city,” Johnson said. “And so what better place to tap talent than the university that’s right near us?”

Addressing diversity in Chattanooga is part of a national discussion on the subject, Stokes says.

“I think it’s something that’s timely,” Stokes said. “Nationally, inclusion and diversity are major focus topics. I think that it can bring light to cultural growth here in Chattanooga and allow Chattanooga to compete on a global and national level by being able to embrace diversity on another level,” he said.

“It shows some initiative from the city by trying to make sure it’s a diverse place for employers to bring jobs to Chattanooga. It’s a good-faith showing that Chattanooga believes in diversity and what it actually can do for a city.”

Malone, who will graduate in December, says she has “never felt as valued as I have in this fellowship.”

“It makes me feel proud of the city for taking steps to not only realize the problem, but they are actively seeking ways to solve it. I sometimes have to pinch myself because the opportunity doesn’t seem real. I would have never imagined myself in such a prestigious position and I can’t think of a better way to end my time in Chattanooga.”