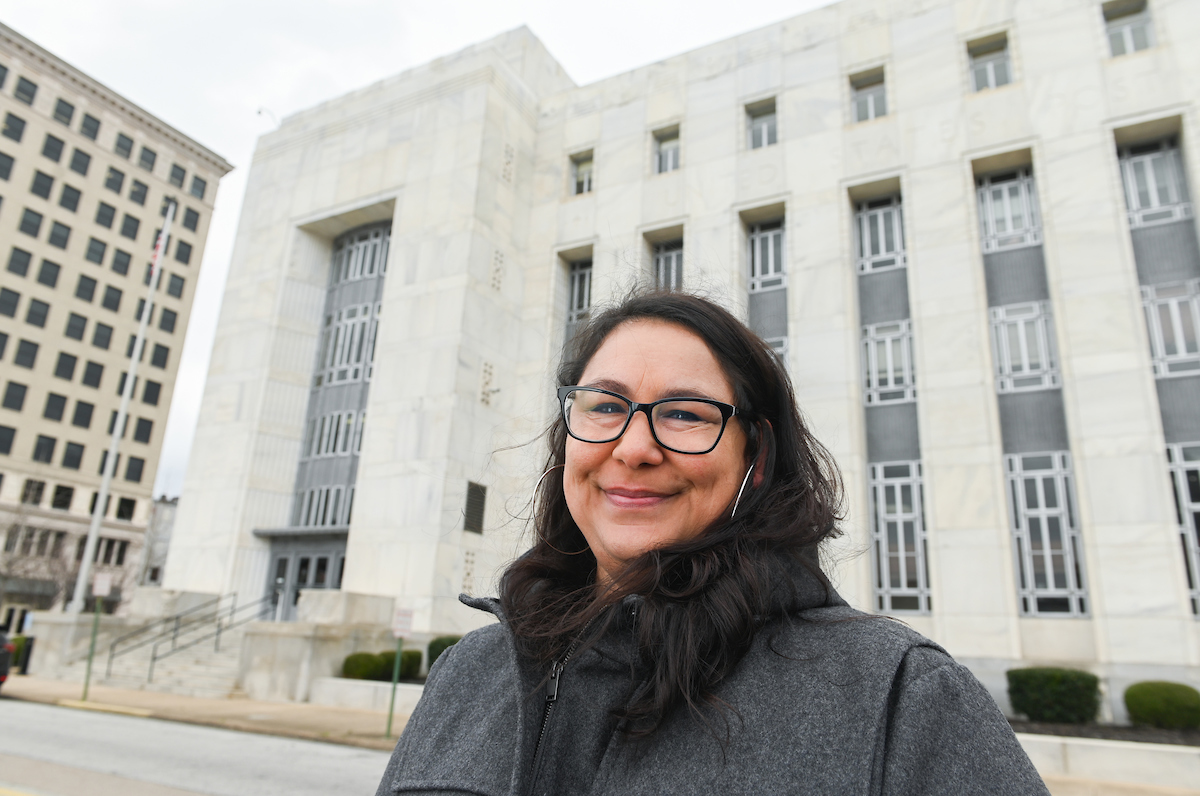 Tiffany Herron stands in front of the Joel W. Solomon Federal Building and Courthouse where the civil trial against three Ku Klux Klansmen took place in 1982.

What: —“Black Heroines for Justice: 1980s Terrorism of the Ku Klux Klan in Chattanooga and the Women Who Stood Against Them”

Viola Ellison, Lela Evans, Opal Jackson and Katherine Johnson were hit with shotgun pellets fired from a moving car outside a nightclub on Martin Luther King Boulevard, then named Ninth Avenue or “The Big Nine.” Fannie Crumsey was injured from flying glass. The women were ages 50 to 74. All lived.

An all-white jury acquitted Church and Payne and sentenced Thrash to nine months and a fine of $225 on lesser charges; he was released after three months.

Immediately after the verdict, Chattanooga erupted in four nights of rioting accompanied by further attempts at violence by the Klan. Civil rights icon Jesse Jackson came to town to try to stop the rioting.

After the criminal trial, the five women filed a $1.5 million federal civil complaint believed to be the first ever filed based on the anti-Klan Ku Klux Klan Acts of the Reconstruction era passed in 1871.

After an eight-day trial in February 1982—Black History Month—a jury of five whites and one black ordered the Klan to pay the women $535,000. The case created the legal strategy for dismantling the Klan across the country in the following years.

Tiffany Herron was both amazed and appalled.

As part of her Literary Analysis course, she learned that, in 1980, four black women were shot as they came out of the Whole Note Lounge on Martin Luther King Boulevard. Another woman was injured by flying glass.

Who shot them? Three Ku Klux Klan members driving by.

“I was like, ‘Wait, wait! Not 1960?’,” says Herron, who is earning a master’s in English with a creative writing focus at the University of Tennessee at Chattanooga. “I remember 1980; I was young, but I was alive. It just shocked me. These women should have a mural; they should have a statue.”

None of the women died, and all three Klan members were charged with attempted murder. Two of them were later acquitted by an all-white jury; the third was sentenced to nine months in jail and a $225 fine. Four nights of rioting followed the verdict.

Two years after the criminal trial, however, the women were awarded $535,000 in a civil trial held in Chattanooga. A lawyer from the New York-based Center for Constitutional Rights, Randolph McLaughlin, represented them. He is coming to town on Feb. 20 to speak about the trial as part of Black History Month.

The presentation—“Black Heroines for Justice: 1980s Terrorism of the Ku Klux Klan in Chattanooga and the Women Who Stood Against Them”—is the first time anyone has asked him to give a presentation about the Chattanooga case, McLaughlin says.

“What’s important for people to know is that the law is an effective tool for social justice and social change,” said McLaughlin, who is still practicing civil rights law with his wife, Debra Cohen, also an attorney.

The Chattanooga lawsuit was the first time the Klan had ever been sued in a civil court. Building its arguments on a foundation of 1871’s Ku Klux Klan Acts, the case is now the legal backbone used in other anti-Klan cases.

“We broke the back of the Klan,” McLaughlin says.

Now a professor of law at Pace University’s Elizabeth Haub School of Law, McLaughlin notes that the first article he published as a full-time professor was an examination of the legislative history of the Ku Klux Klan act. Many of the cases he and his wife now represent involve discrimination by law enforcement and employers or violations of voting rights, he says.

“Fortunately or unfortunately, we’re still pursuing that dream,” he says.

Herron says she tried to find the women who were shot or their family members and others involved in the incident, but has come up empty-handed.

“I’m still getting bits and pieces,” she says. “I’m not over trying to find people who are willing to talk about this.”

Although 40 years have passed since the shooting, many issues faced by women and people of color are still present today, Herron says.

“I feel as though there are rampant injustices based on race and ethnicity and culture and gender,” she says. “It might not be  as obvious as someone with a shotgun riding down the street.”