Brown and Crain pursuing similar goals both in school and after 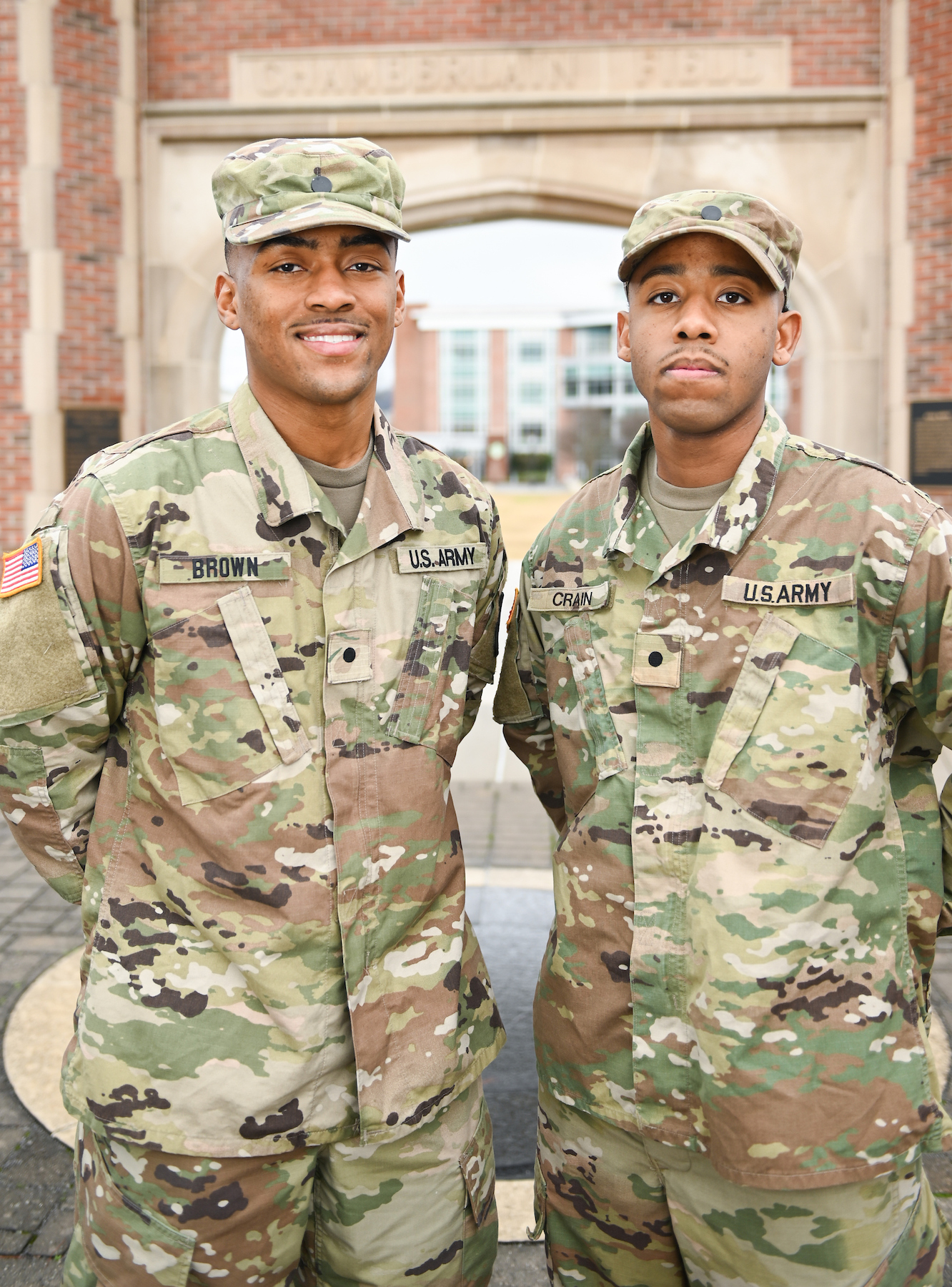 Jontae Brown, left, and John Crain are both members of the UTC ROTC, the Brother2Brother group on campus and interns at TVA.

When: 5:30 p.m. Every Tuesday
Where: University Center’s Ocoee or Hiwassee Room.

On John Crain’s right arm is a tattoo of his smiling grandmother—Brenda Woolridge—along with the date of her birthday and a quote:

“Mothers don’t fear death. Their only fear is leaving their children in the world knowing that no one will love them like she did.”

The tattoo is not only a tribute to his grandmother, it also acknowledges that life stretches far beyond yourself and encompasses those you love and those you encounter along the way. That philosophical torch—carried by his mother, too—are why they’re his role models, Crain says.

“They always kept me on the straight path and made me who I am today, a leader,” he says. “I love dealing with people. That’s my passion. I love helping people in any form I can. I feel like that’s my purpose on this earth,” he says.

Jontae Brown could be his twin with a resume and bedrock of belief that mirrors Crain’s. Both are cadets in ROTC. Both are pursuing human resources degrees in the Gary W. Rollins College of Business at UTC. Both are interning in the TVA Human Resources Department in Chattanooga.

“I enjoy talking to people, the things that HR does,” says Brown, a junior. “If I was to get a job, it would be HR manager, overlooking people because I like being in the manager role.”

They also practice those goals as members of Brother2Brothers (B2B), the campus-wide group that reaches out to male black students, offering personal and professional mentoring.

B2B was designed for students by students. In 2012, UTC students Takeenan McLean and Nathan Harlan thought black males on campus needed a unifying organization beyond fraternities and their formal structure.

“They reached out to myself and several others in finding ways to bring the group to life,” says Christopher Stokes, UTC assistant director of Multicultural Affairs and B2B’s advisor. “This umbrella organization allows young men to find support across the nation and Southern states through networking and professional development experiences in the form of retreats and conferences designed for the unique experiences they face.”

“They share similar stories, but offer very different insights into their life and college experiences,” he says. “Jontae has a reserved yet charismatic personality that brings a quiet strength to the group; whereas John has a very matter of fact analytical approach, which challenges others to think past the surface.”

Both stand out as through their camaraderie as good examples of the organizations mantra, ‘I am my Brother’s Keeper, and together we will rise!’”

Crain understands the situations faced by some black students coming to UTC. He grew up with a single mom and two brothers in a Flint, Mich., neighborhood that was hardly middle-class-and-green-grass.

“It was rough, all the poverty,” he says.

Since being formed B2B has hosted such annual programs such as Hooping for a Cure, A Night Out with a Gentleman and Battle of the Sexes. It also has headed into the community to work on such volunteer programs as the Ronald McDonald House and the Boys Leadership Summit.

“We try to impact to make sure that we’re present on campus and in the community. We are always here for anybody. If it’s a male and he seeks interest in gaining knowledge and interacting with other males, we want to welcome him in,” says Crain.

Brown says B2B is dedicated to “uplifting the minorities.”

“We teach mannerisms. How to dress; how to speak. Things of that nature,” he says.

When they work with boys living off campus, they take time to talk to them, figure out where they’re coming from and how they’re thinking, the pair say.

“We try to influence them to let them know that they’re not alone,” Crain says. “Many of them come from single-parent homes or broken homes. They grow up in crime. We try to make them see that there’s always different, positive ways to handle things.”