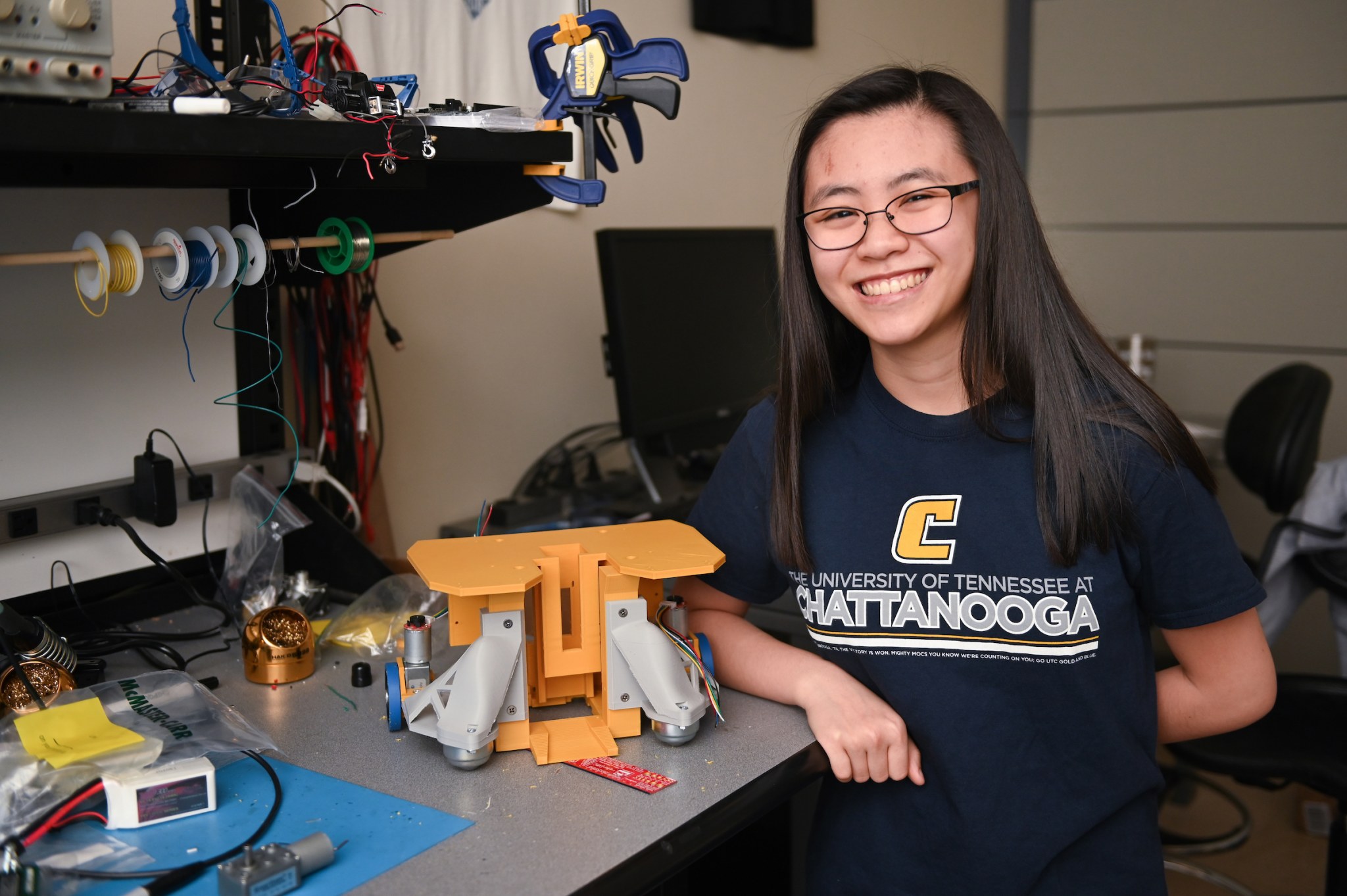 A junior in electrical engineering, Caroline Lee is being fascinated with electrical circuits, electromagnetism and robotics.

Chances are most 16-year olds are motivated to obtain a driver’s license and borrow a family car. Hopefully, some believe school is important, too.

But for 16-year-old Caroline Lee, being educated in electrical circuits, electromagnetism and robotics are the topics that drive her. Despite her young age of 16, Lee is a University of Tennessee at Chattanooga junior majoring in electrical engineering.

You read that right. A junior in college at age 16.

Lee is the third member of her family to attend UTC at an accelerated pace. Both of her older brothers, Alexander and Christopher, are recent graduates of the cutting-edge UTC electrical engineering program. Alex, 23, received his bachelor’s degree in 2016 and went on to earn his MBA from UTC in 2019; Chris, 21, received his bachelor’s degree in 2018.

“The fact that Alex and Chris both went to UTC helped familiarize me with the environment,” Lee said. “I occasionally went with them to school. I watched them do projects, and I watched them walk across the stage (at graduation). “Things like that brought a sense of familiarity. I liked the university and the people I met along the way. That’s why I chose UTC.”

Lee arrived on campus last August as the bearer of a UTC ASSETS scholarship (Academic Intervention, Social Supports and Scholarships for Engineering Transfer Students), which provides awards of up to $7,400 annually to help transfer degree completion for students majoring in civil engineering, chemical engineering, electrical engineering and mechanical engineering. She transferred to UTC after spending two years at Chattanooga State Community College.

“There was a time when all three of us were going to college at the same time, so receiving this scholarship helped my parents a lot,” said Lee, who was just 13 when she initially enrolled in community college. “All three of us landed scholarships that helped relieve some of the financial stress. I’m thrilled that I was fortunate to help out financially by getting the ASSETS scholarship and other scholarships.”

Just a few years ago, Lee was a middle-school student on a seemingly conventional path. Then, a very non-traditional thing happened; she skipped high school. “It all happened really, really fast. People think I was home-schooled, but I actually went to public school from kindergarten to eighth grade,” Lee said. “When I was in seventh grade, I was already taking advanced courses. In eighth grade, a couple of months before graduation, I started taking classes at Chatt State. I did that because Chris was attending Chatt State, and he found this opportunity where I could take Pre-Calculus 1. At the time, I thought I would just take that class because it sounded fun and then (I planned to) go to high school.

“But I finished Pre-Calc 1 in one month. And then I took a full semester of classes from June to August that summer at Chatt State. I made my decision to continue my education at Chatt State spontaneously.”

Lee admitted going directly from an eighth-grade classroom to taking college courses was daunting, but she had a guardian angel by her side in big brother Chris.

“During my first semester at Chatt State, I was taking some classes with him, and he helped me get used to the environment,” she said.

Fast forward a couple of years, and Lee now finds herself in the second semester of her junior year at UTC, at one of the top electrical engineering schools in Tennessee. Instead of mostly online schooling, she’s in a university setting with nearly 12,000 other students. She has had no qualms adjusting to the classroom setting, landing on the Dean’s List in the fall. UTC has brought a whole new level to her college experience, she said.

“The fact that I’m on campus all the time has given me the opportunity to interact with students,” she added. “Whenever I have a question, for example, I can ask them, ‘Hey, what’d you get for so-and-so?’ I have enjoyed interacting with other students because it’s helpful whenever you’re trying to overcome challenging tasks—both within and outside of school.”

Like many college students, Lee may not be able to answer the question of what she wants to do after college.  “Honestly, I don’t know,” she said, “but I do know what I want to work towards, which is to help my community in a meaningful way through electrical engineering.”

For Lee, age is just a number, although turning 16 did mean she could take the driver’s test. “I got my license in July and I drive to campus,” she said with a laugh. “Sometimes, I forget my age. I know that it sounds weird. The past two or three years have been a blur, but I know that I’ve changed a lot since eighth grade.

“I’ve learned a lot, too, and I’m happy about how much I have grown socially, mentally and physically. I might be young, but I don’t think anyone here has treated me like a little sister. They treat me as an equal.”

Chuck Wasserstrom is the Director of Communications for UTC's Office of Development and Alumni Affairs.