Determined amid devastation, Briana Brady has plans for the future 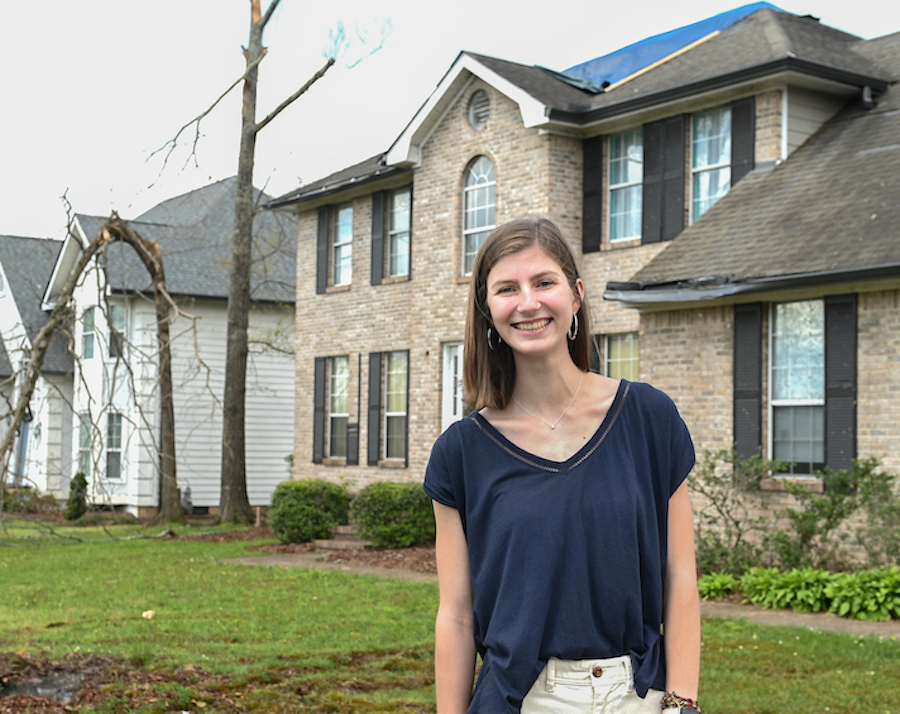 The coat closet in the Brady home is maybe two feet deep and three feet wide. The ceiling slopes down at the back, cutting into its usable space.

But Briana Brady, her 17-year-old brother, 15-year-old sister, mother and father crammed themselves into it just before the Easter tornado tore through their neighborhood, located just east of Hamilton Place.

“My Dad hadn’t even gotten the door closed,” said Brady, an Innovations in Honors Scholar in the University of Tennessee at Chattanooga Honors College. “We all heard some major noise. They say it sounds like a train and it really does.”

Everyone in her family lived with no injuries so, naturally, still being alive was the best news Brady has had in, well, her entire life.

But in what might be considered a small bite of dessert, she found out two weeks after the tornado that she is a 2020 recipient of the Harold Love Outstanding Community Service Award. Each year, five people from across the state are honored for their outstanding social work in cities with universities and colleges.

“I was absolutely humbled and honored,” said  Brady, who graduates in May 2021 with a degree in political science said. But she admitted that she had an inkling that something was going on when Honors College higher-ups asked her a couple of times if she could give them a photo of herself.

“Briana is very smart, very knowledgeable and very, very committed to the causes about which she cares,” said Honors College Dean Linda Frost. “She is multi-talented, kind, whip-smart, and solely devoted to social justice particularly as it appears—or doesn’t—in our educational systems.

“She right now is a change agent and I am thrilled that she has been awarded the Harold Love Award. I’ve known very few students who deserve it more than she.”

The run-up to the Harold Love Award began many years ago for Brady when, as a student at Chattanooga’s Baylor School, she began spending afternoons at the city’s Carver Youth and Westside Family Development Centers where, among other tasks, she still helps with the kids’ homework, plays games with them and tries to make sure their families meet their daily food needs.

“This will be my eighth year, so I’ve watched these kids grow up and have known their families for a long time,” Brady said.

After graduating from the Baylor School in 2017, she attended Smith College in western Massachusetts for a year.

“While it was wonderful academically, it wasn’t the right social fit for me, and I missed my involvements outside of the campus and classroom,” she explained. “Coming back to UTC allowed me to continue my education in an environment I felt more comfortable in, while enabling me to continue my daily opportunity to spend each afternoon at Carver with friends in the community.”

The Harold Love Award comes with a $1,000 prize, which she said she wants to take back to some of the families with whom she’s worked at the Chattanooga family centers.

“This summer I’m going to think  how to do that. It might be trying to provide mental health services for children and fund their therapy, if needed,” she said.

After graduating from UTC, Brady said she plans to pursue a master’s and Ph.D. with the ultimate goal of a career in “a think-tank environment, some sort of political realm, crafting policy for urban school environments.

“I’d be trying to work on school discipline and how those practices can be improved through more restorative justice efforts and trying to teach children and their teachers ways in which communication, rather than discipline and punishment, can be an even more effective way of learning,” she explained.

Back at  home, while her family survived the tornado without injury, their house has some serious wounds but is mostly intact; however, a tree crushed her car. Their neighborhood, though, is a blast zone.

Crumpled and torn-off roofs. Naked, leafless trees, at least the ones still standing. Towering piles of rubble in all shapes and sizes. RVs tossed into homes. Entire houses leaning 45 degrees to one side.

Even after the tornado roared through, Brady was still scared.

“I was terrified afterwards because we had no idea what was coming. We had no cell service; we had no internet; we had no power. We didn’t know if there was another one coming.

“I told my sister, ‘I can’t do this again tonight. I can’t go through that again.’”

But Brady has been through so much and given so much, it seems like she can stand up to anything.

3 Comments » for Determined amid devastation, Briana Brady has plans for the future