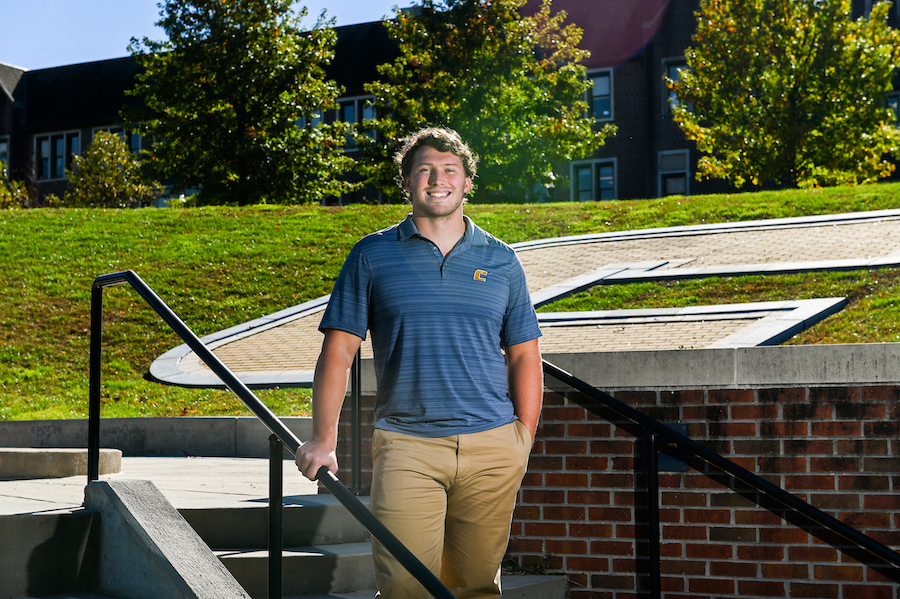 Cole Strange graduates with a degree in psychology this fall.

His academic journey at the University of Tennessee at Chattanooga follows a winding path—the School of Nursing to a psychology major and now embarking on a master’s in engineering management.

And don’t forget about another option: a career in the National Football League.

Strange, a 6-foot-5, 305-pound offensive lineman on the UTC football team, is receiving a bachelor’s degree in psychology. But thanks to the pandemic-caused delay of the Southern Conference’s football season until spring, he gets the opportunity to spend one more season in a Mocs uniform.

COVID-19 might actually have a positive impact on Strange’s career.

“If the coronavirus hadn’t have struck, I planned to have one class this fall, and that would have been my last semester,” said Strange, a two-time member of the conference all-academic team, boasting a 3.7 GPA. “If we were not given another year to play, it would have felt like my time here just ended. It means a lot to me that we’re able to go out there and play in the spring. It seems like the right way to end it.”

To maintain football eligibility after receiving an undergraduate degree, Strange will enter the master’s in engineering management program at UTC. Lisa Tarr, advising coordinator in the College of Engineering and Computer Science, brought the program to his attention.

Previously an academic advisor with the football, Tarr has known Strange since high school, and steered him toward psychology when he realized that nursing and football weren’t necessarily compatible.

“Cole felt like psychology would offer him a freedom of direction,” Tarr recalled. “He thought that, rather than helping people in a nursing role, he would go on to help people in a psychological role. I think he liked it.”

He did but wants to expand his knowledge.

“I have enjoyed psychology, but I’ve always thought that I would have enjoyed engineering or something along those lines,” Strange said. “After reaching out to Miss Lisa this fall and talking to her about it, she told me about the master’s program. I liked what she told me.”

The program addresses topics such as engineering economics and finance, project management, decision-making and leadership.

“This program requires human skills and data analytics,” Tarr said. “It takes the technology and the business end and kind of merges them together, and I could see Cole being very successful in that. And the beauty is it’s flexible because it’s an online program, so it doesn’t conflict with practice. If he has the opportunity to play in the NFL, he can come back and finish it later.”

While a professional football career is a dream for many college players, there is some modicum of hope—or at least a personal gut feel—that Strange has what it takes to get an opportunity.

Being a cerebral player helps. So does the chance to play this spring when NFL teams scout college players. They can watch UTC play without competition from higher-profile programs who played this fall.

“I have always made sure that I get good grades and stay on top of school, but as far as what’s closest to my heart, football means the most,” Strange said.

“Since I’ve been young, (playing in the NFL) has been fixated in my mind. As I got a little older, I realized how rare it is that it does happen. And then, as I’ve gotten closer and closer to it, I don’t think anything’s guaranteed, but if I keep working at it, I might have a shot. If the opportunity does present itself, then it’s something I’m going to try and do. I think that I can do it. I’m confident in myself that I can.”

While football might or might not be in his future, starting the master’s in engineering management program is the plan right now, Strange said, and would open doors for him.

“For about two or three years now, as I’ve gotten closer and closer to graduating, it’s become more of a serious thing that what I’d like to do is go into the military,” he said. “That doesn’t have anything to do with psychology or engineering management, but that’s something that I think I would enjoy and excel at.”