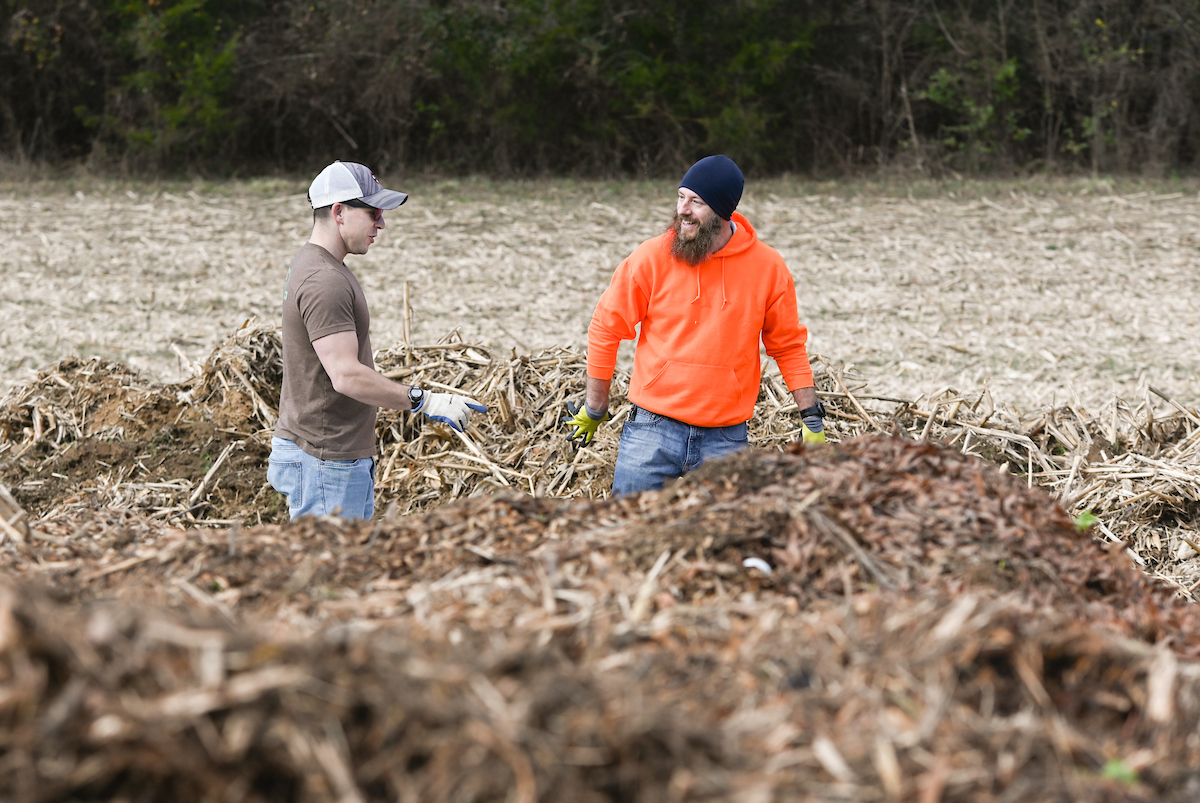 Normand Lavoie, left, and his partner Michael Ryan stand in one the piles of compost they’re creating at a site in Wildwood, Ga.

Have you got food scraps you’re dumping in the garbage because they aren’t really edible? The tops of carrots or onions. Used coffee in filters. Maybe eggshells from breakfast.

Does a company come by once a week to empty your garbage and carry everything to the dump?

Normand Lavoie wants that food. Not to eat. He wants it for his business, NewTerra Compost.

Last summer, Lavoie and his partner, Michael Ryan, created the company and spent several months in the setting-up phase, figuring out their “recipe” and other details.. The company—the only local company in the Chattanooga area to handle food scraps—is now open for business and in full operation. Ryan works full-time for Jacob’s Paper and does his NewTerra work in his off time.

When commercial garbage companies handle food waste, it is taken to county landfills, Lavoie explained, where it breaks down over years and creates methane, a dangerous gas that traps heat in the atmosphere at higher levels than even carbon dioxide, he explained.

“Once you start separating your own food waste, you see how much you create and how little you can send to the landfill. It’s kind of cool to know, ‘Hey, I can do something’,” said Lavoie, who is working on his Master of Business Administration in the Gary W. Rollins College of Business and, taking a slow, measured pace, expects to graduate from the University of Tennessee at Chattanooga in 2022.

“The folks that we work with are primarily concerned with being responsible households and taking a stand for doing something better,” he said.

During the company’s first phase last year, the composting was taking place in Lavoie’s backyard, and neighbors brought their food waste over. But he and Ryan now have leased a 20-acre plot in Wildwood, Georgia, where all the composting takes place. The space was needed because making compost—especially in large amounts—takes a few months of combining the food with wood chips, then pumping in oxygen to keep the inside of the mixture between 145 and 160 degrees.

Residential customers are given a five-gallon bucket and can empty them weekly in one of the Compost Kiosks located around North Georgia and Chattanooga. In the spring and fall, customers will receive two five-gallon buckets of compost. The cost to join is $15 a month for drop-off, but in a deal now being offered, customers receive a 25% discount by signing up for a year at $135. About three dozen customers have signed up at this point, Lavoie said.

Since NewTerra is making more compost than residential customers will receive, “the remaining compost will be sold to farmers and gardeners looking for a natural way to fertilize their vegetables, flowers, and crops,” he explained.

Along with residential customers, NewTerraCompost also has business customers known as “Founding Members. “Our Founding Members are leaders in sustainability in Chattanooga,” Lavoie said.

Each business is given a 65-gallon container and, about twice weekly, Lavoie and Ryan empty the containers and haul the waste to the facility in Georgia. The price commercial clients pay depends on the location, number of containers and frequency of pickup, Lavoie said.

“Commercial members need to contact us, and we will set up a meeting to explain our services,” he said.

Businesses don’t receive compost when it’s ready; they are customers of NewTerra simply to be part of  sustainability/recycling efforts in the area.

Lupi’s Pizza Pies Owner Dorris Sober said she made sure the business—which has five locations in the area—was one of the first commercial companies to sign up with NewTerra.

“Because the restaurant industry produces a lot of waste, I was thrilled when I heard about NewTerra Compost “A way to divert food waste from the landfill—fantastic!”

Before starting NewTerra, Lavoie worked for local chemical manufacturing company INVISTA. Prior to that job, Lavoie spent several years in the U.S. Army. He was stationed both in Poland for a year—two weeks after he married his wife Veronica. “She was not happy with that.”

Before Poland, he spent nine months in Afghanistan on the frightening and dangerous job of clearing out Improvised Explosive Devices, known by the more familiar name IEDs. He and his fellow soldiers found them and blew them up before they could explode on their own and kill people.

“It was not always a comfortable thing,” he understated.

But serving in the Army fit into his lifelong desire to help the community, he said.

“I think that was one of the prime reasons I joined the Army right out of college,” he said. “I’ve always wanted to serve and give back. I think we’re extremely lucky to be here in the United States. After going all over the world, I’ve seen a lot of different places, and I think we are still in one of the best spots. So it’s what we do that makes a difference. You’ve got to make decisions every day that are a big deal.”

That belief eventually led to NewTerra. He and Ryan know it’s going to take a while to get the business up and running full steam, but that’s OK, Lavoie said.

“It’s not like this is a get-rich tomorrow type of thing at all. This is definitely a grind for us, but it’s something we’re passionate about,” he said. 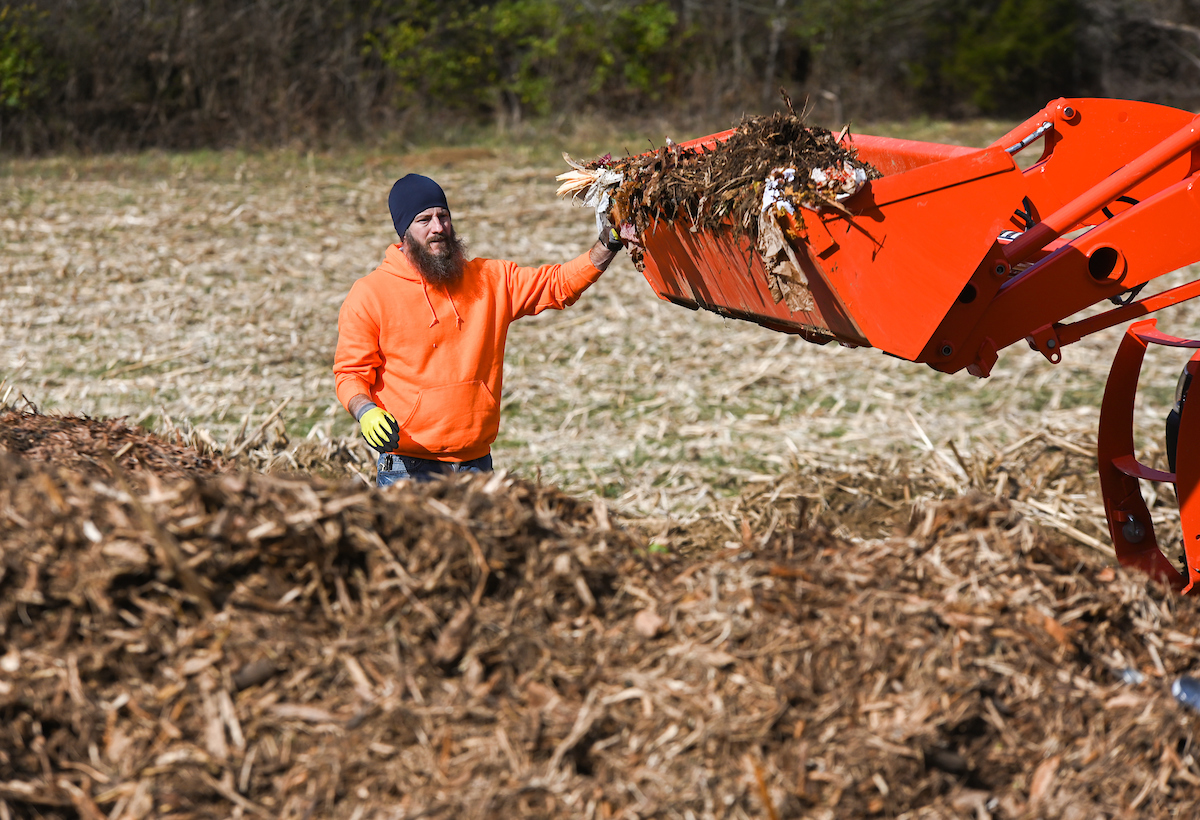 Michael Ryan waits for a load of new compost to be dumped on existing pile. 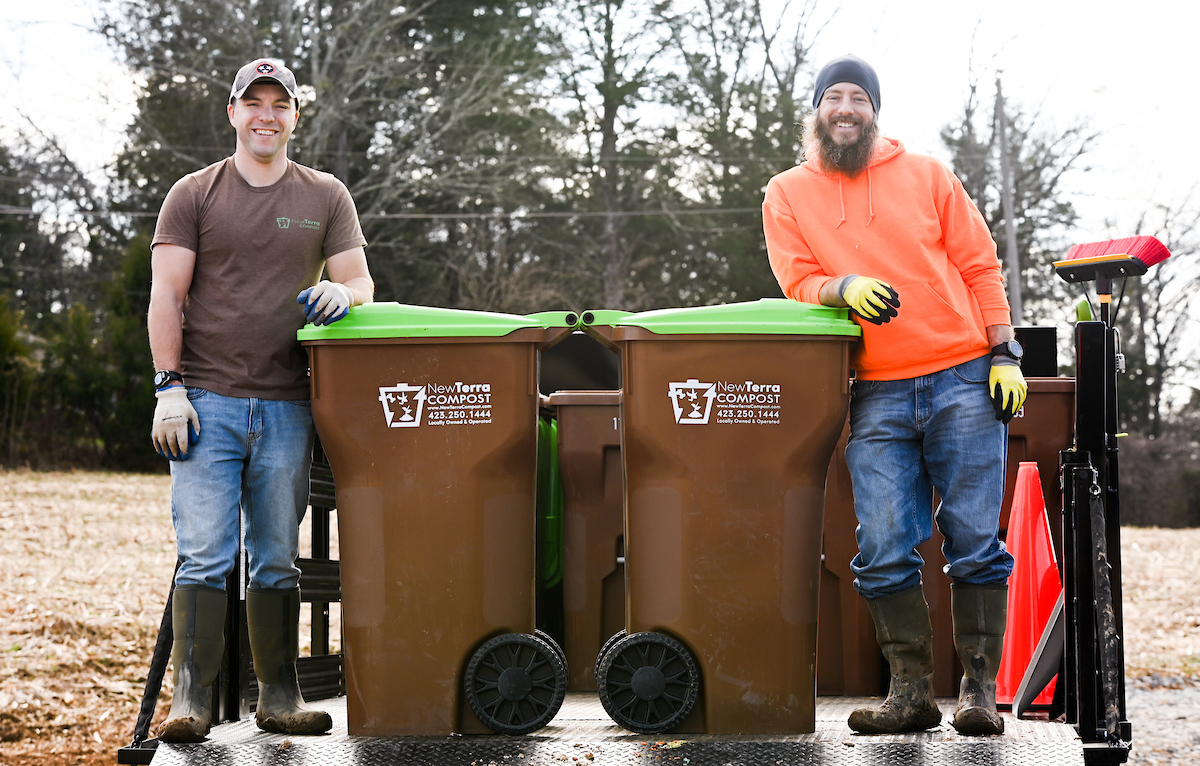 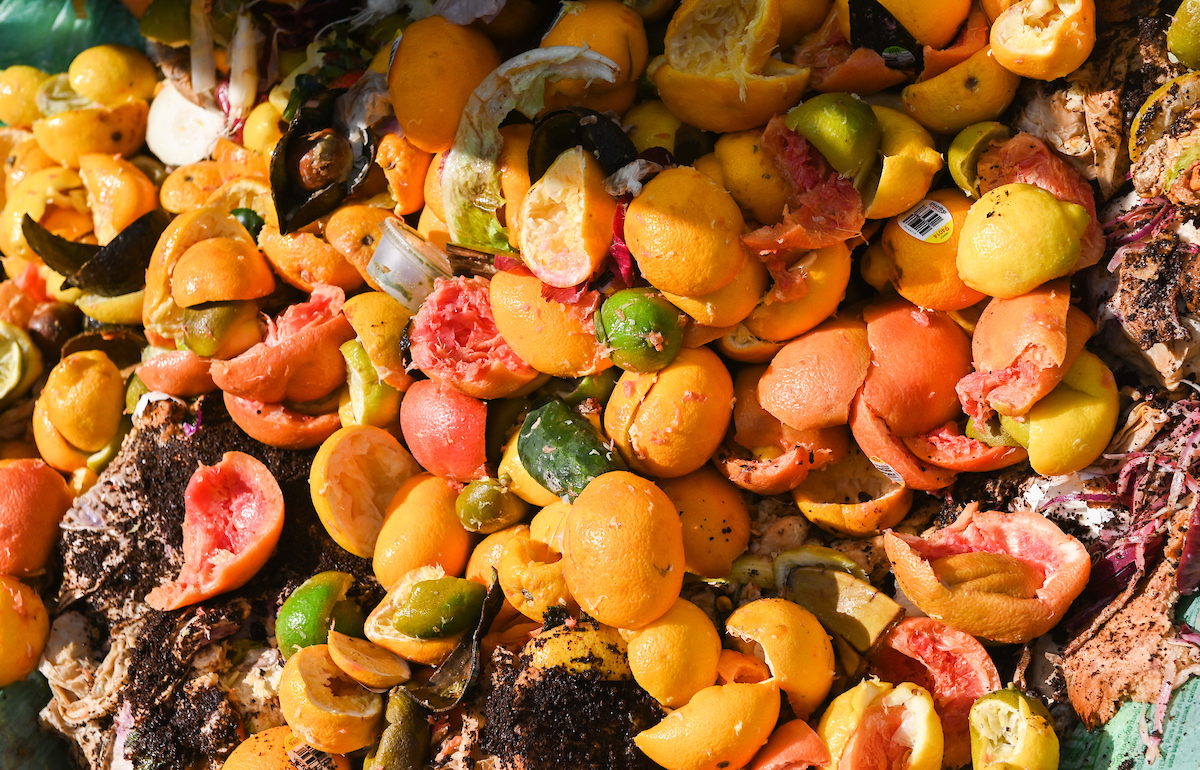 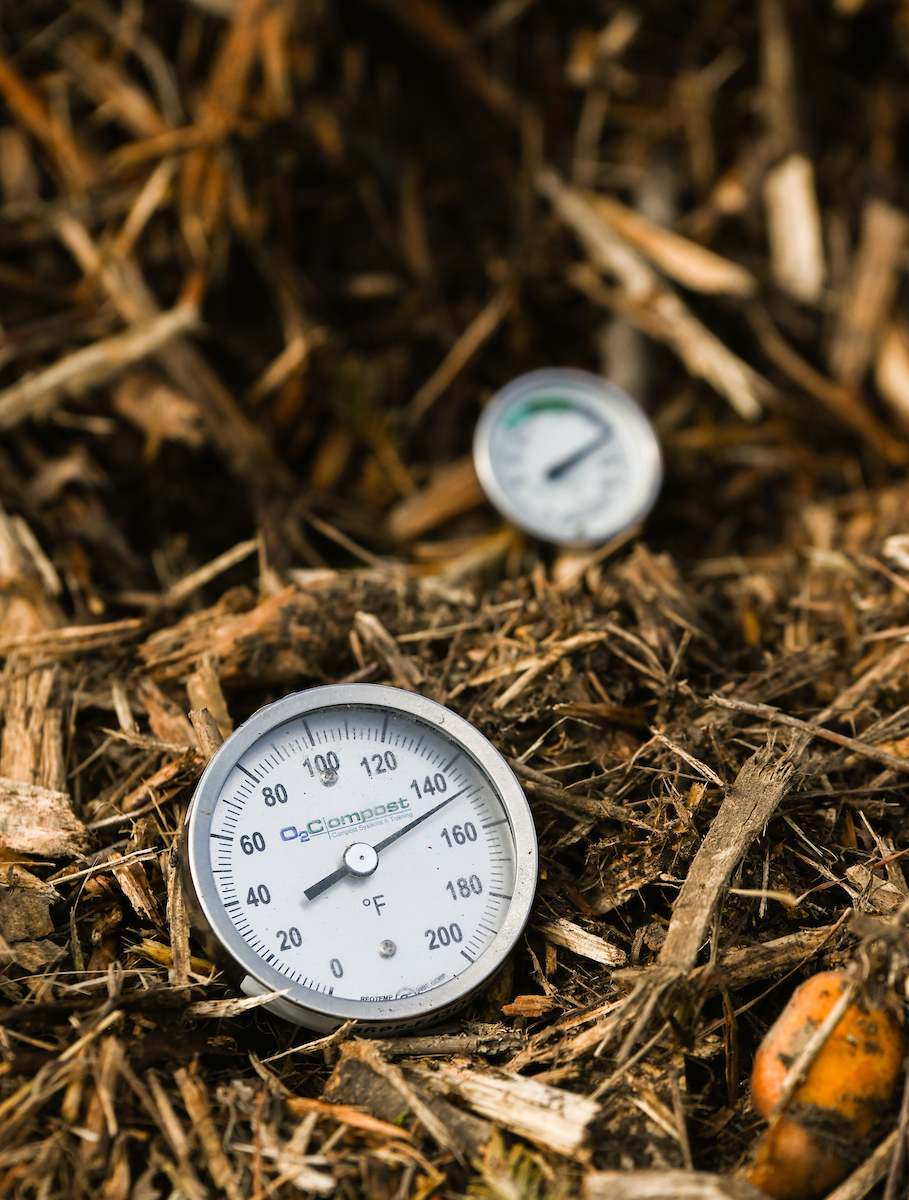 Temperature in a composting pile needs to be kept between 145 and 160 degrees. 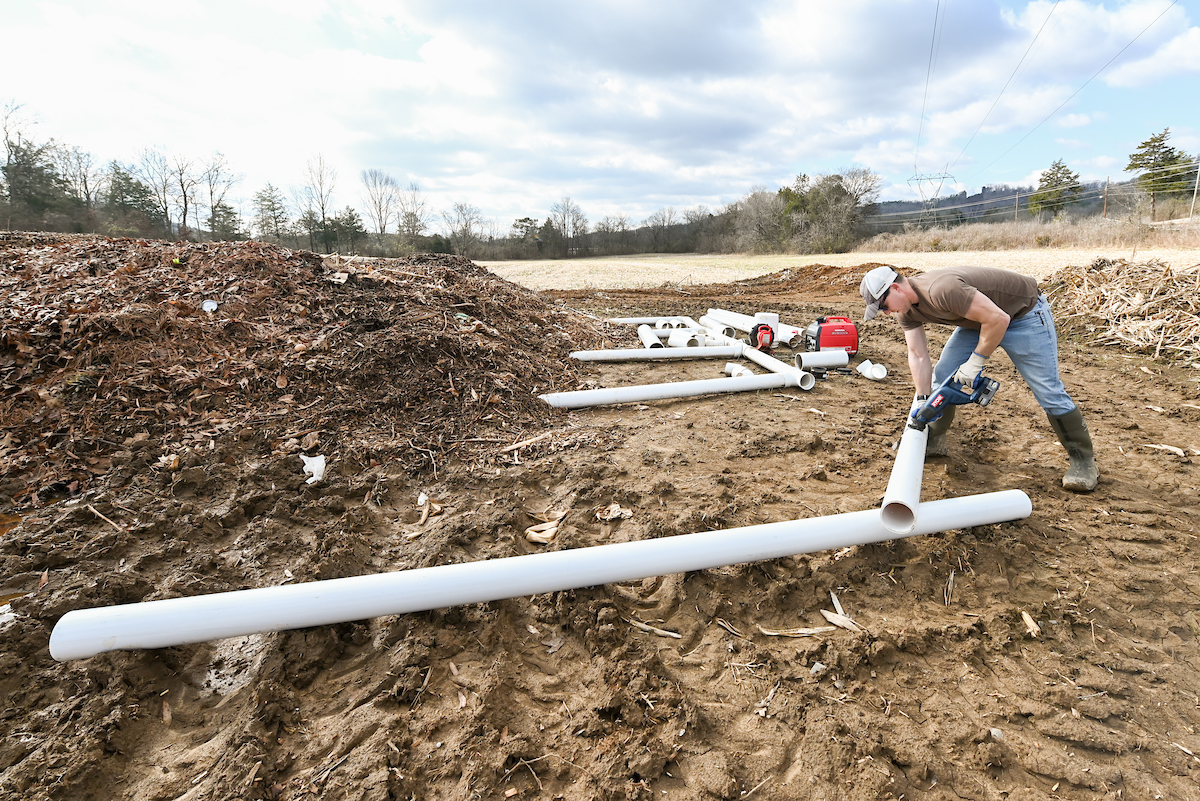 Oxygen must be pumped into the compost piles for the process. 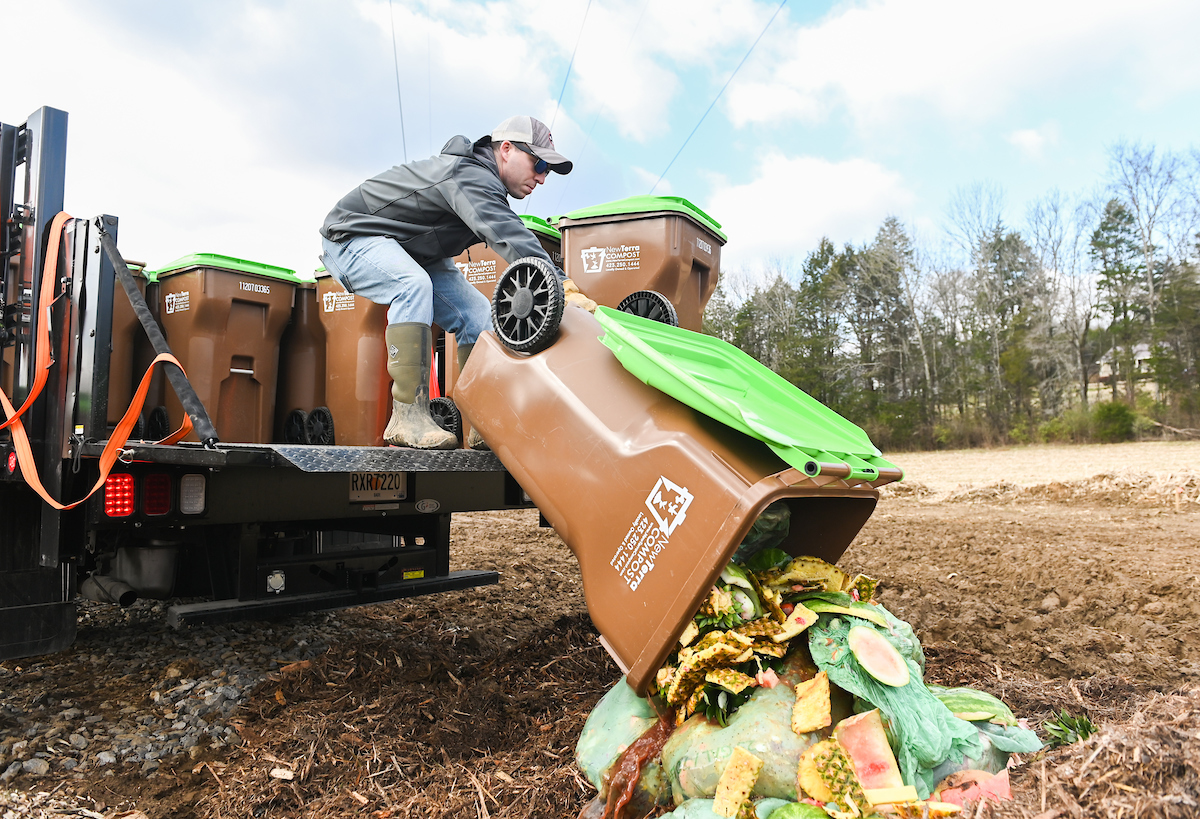 Normand Lavoie dumps a fresh load of food scraps from a bin. 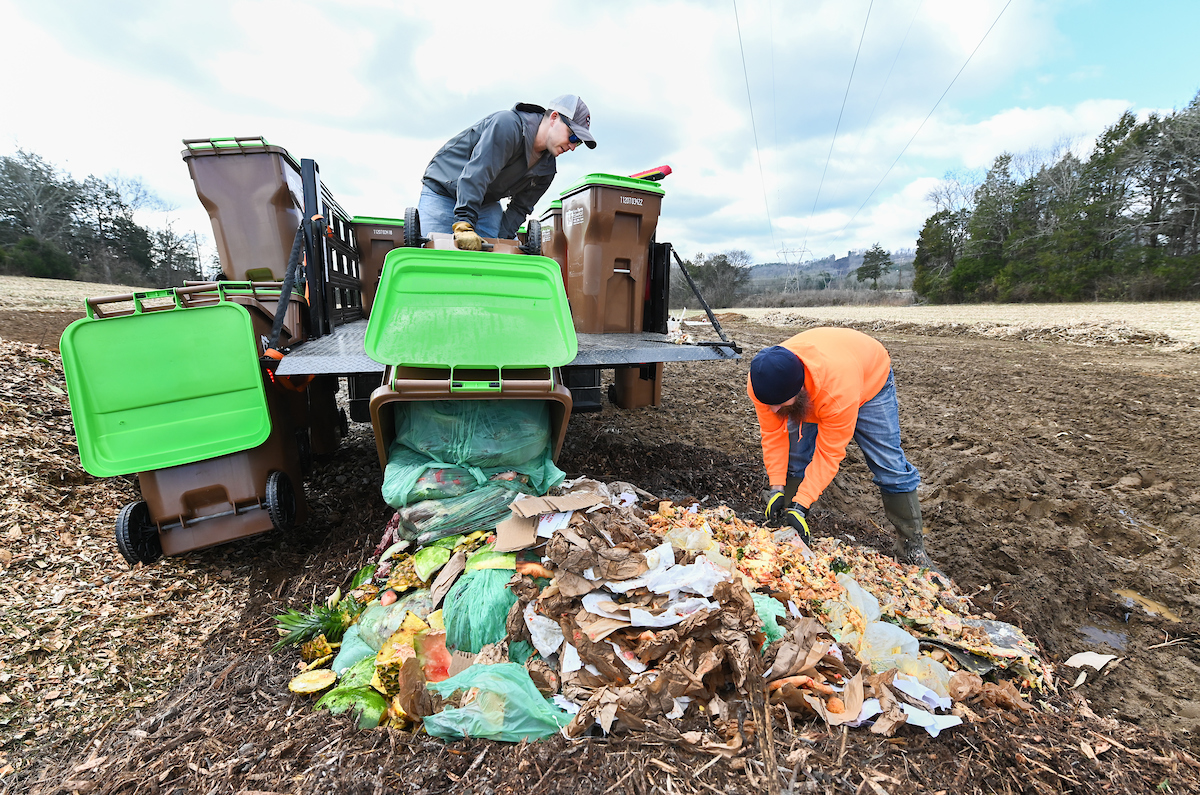 Michael Ryan, orange jacket, sifts through a pile of food scraps to remove anything that can’t be composted. 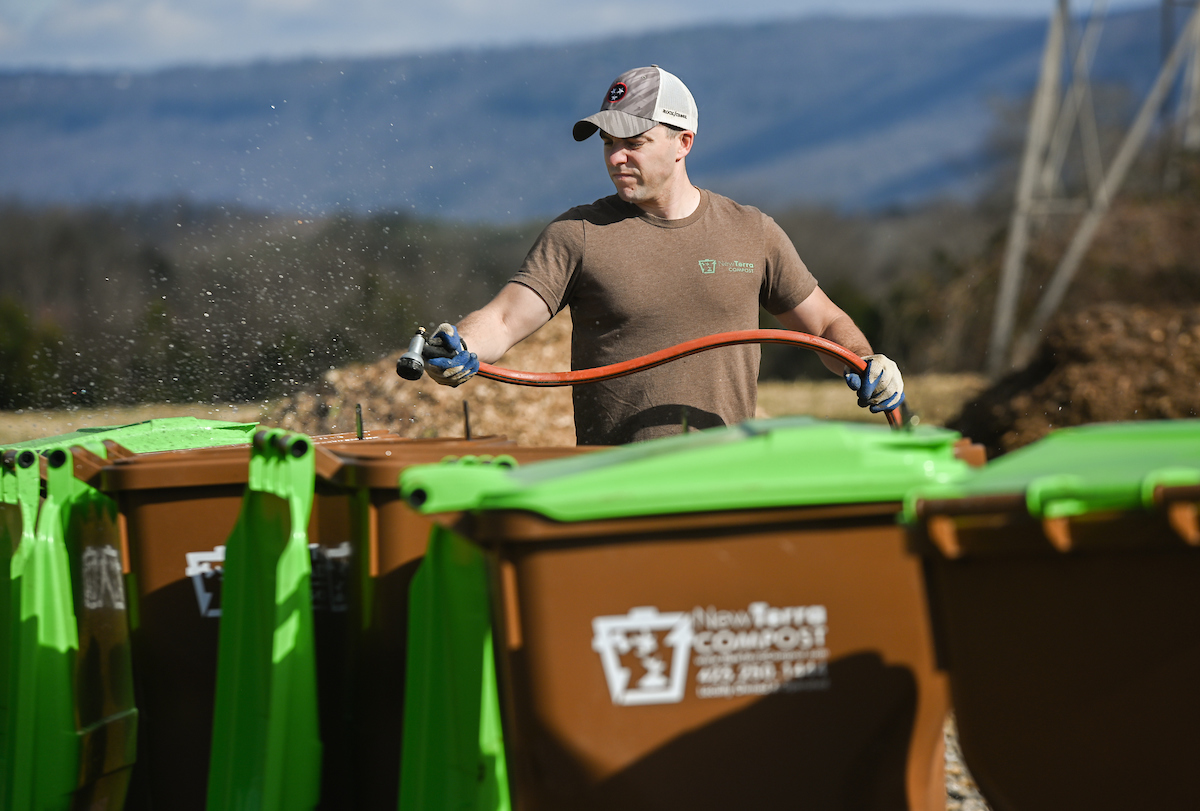 Normand Lavoie cleans out the 65-gallon bins that commercial customers use for food scraps. 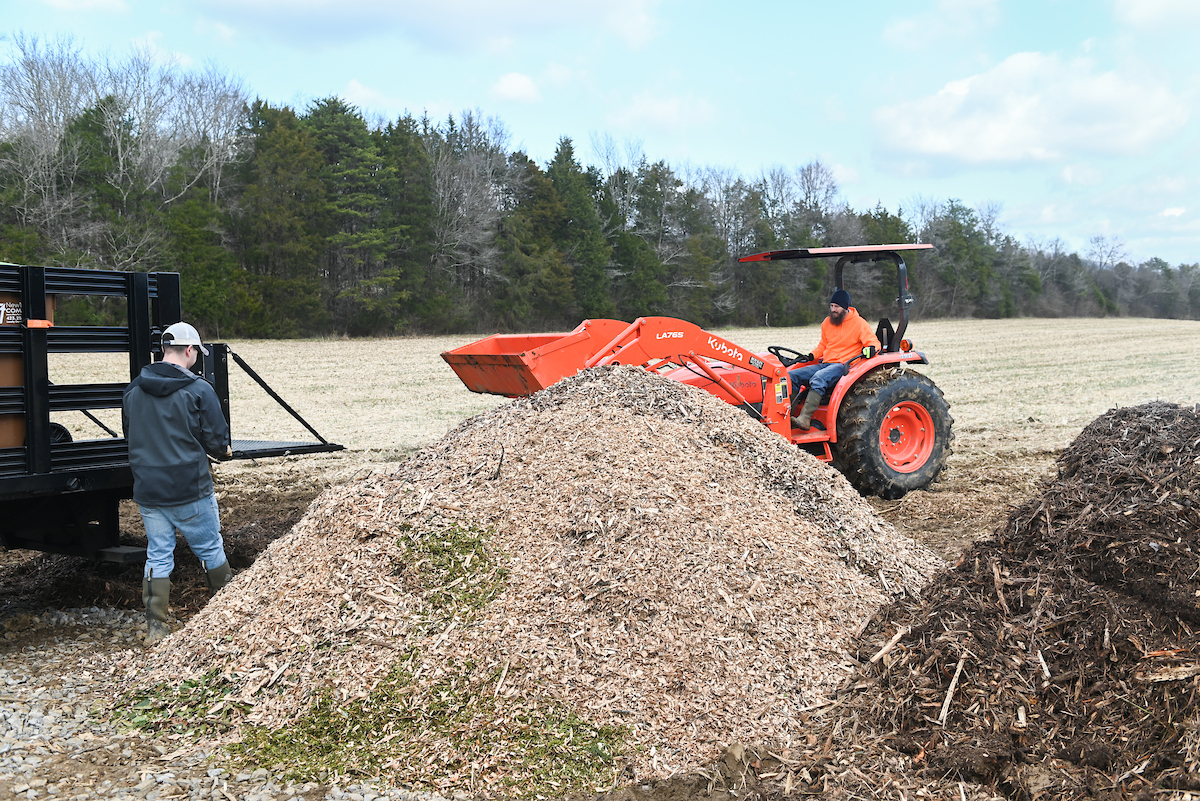 A fresh pile of compost. 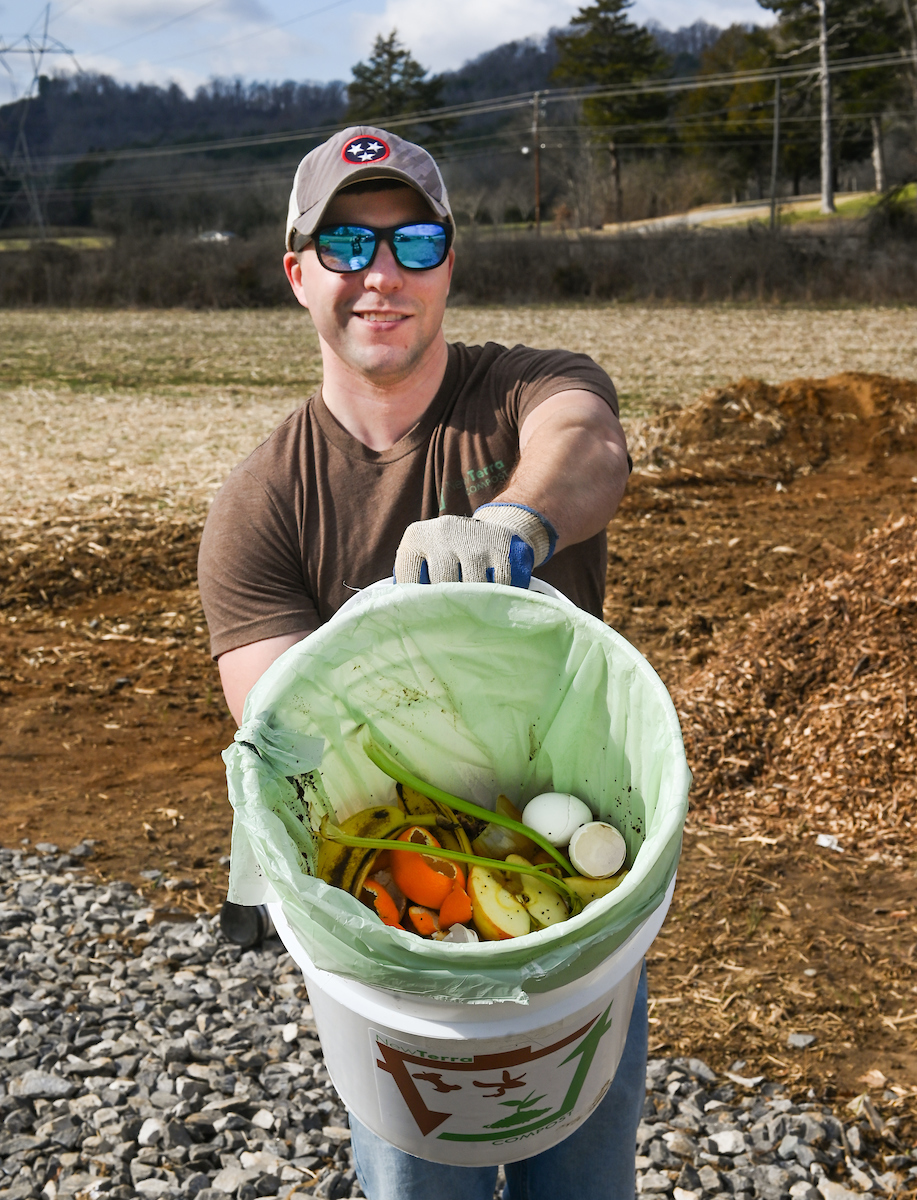