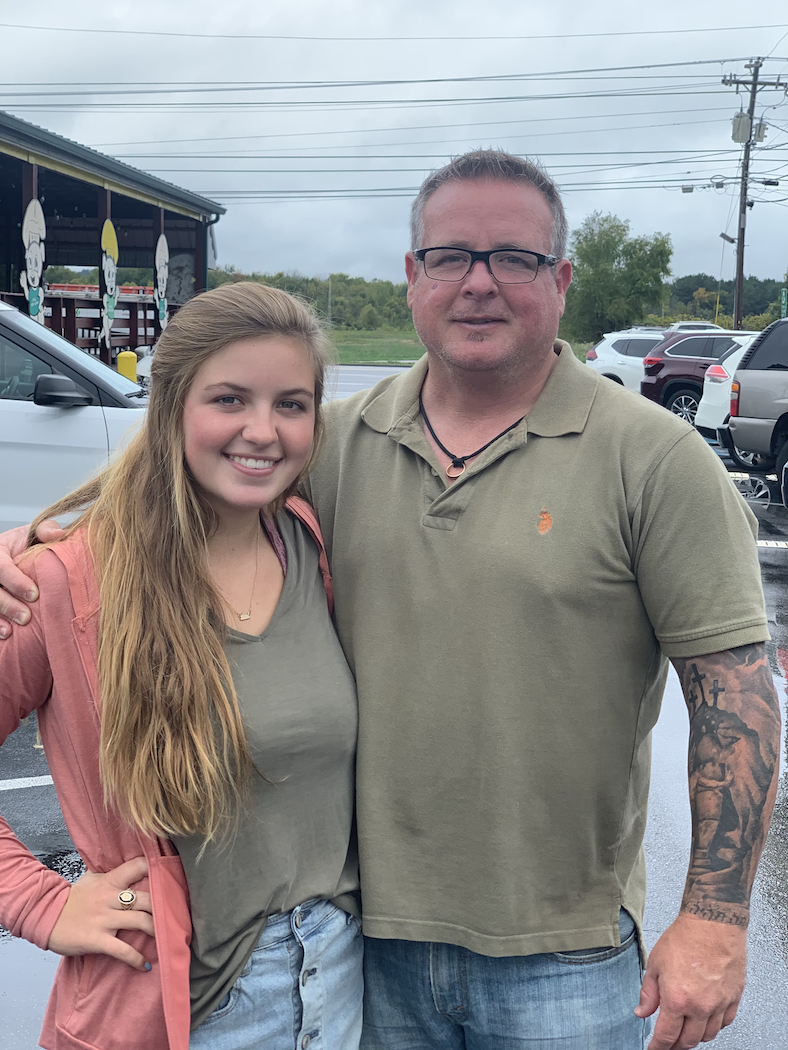 Hannah Petty and her father Brad

Just a boring old Saturday for Hannah Petty, heading to and from her eight-year-old brother’s wrestling tournament.

Oh, except for the woman shot in the head while riding on Interstate 24 west of Chattanooga. And except for Hannah helping her father, an off-duty captain in the Chattanooga Fire Department, while he was trying to save the woman’s life.

“I figured he might need some help if there was something like really serious,” said Hannah, a freshman in biochemistry at the University of Tennessee at Chattanooga.

It was really serious.

The episode started when the Petty family—Hannah, her parents, her eight- and five-year-old brothers and her 15-year-old sister—were coming home after her brother’s wrestling tournament in Murfreesboro, Tennessee.

Her father, Brad Petty, was driving, and Hannah was dozing in the backseat when she felt the car swerve suddenly.

“I felt the car jerk, like he was braking really quickly, and I sat up to see what was going on,” she said.

What was going on was her father pulling over after seeing a car stopped on the side of the interstate and a man trying desperately to wave down a car. As her dad got out of his car, the man ran up to him, frantically talking. Hannah watched through the back window as her father ran to the other car. She waited a bit and, when she saw her father on his smartphone, she decided he might need help.

“I ran down to where they all were and there was a young woman slumped over in the back seat of their car, and she was bleeding quite a bit,” she recalled.

Talking to a 911 operator, her father handed the phone to Hannah so she could relay medical information. Meanwhile, he was trying to staunch the flow of blood from the woman’s head.

The twin sister of the woman who’d been shot had been driving and the man had been in the passenger seat. They were understandably in a panic.

“They were freaking out, trying to get the girl to sit up, to get her to start responding, saying things like, ‘Come on, sit up. Talk to us.’”

But they were getting in her father’s way.

“I moved them towards the front of the car, so they could still see her, but were far enough away that they weren’t on top of her.

“I wanted to bring them a little bit of comfort,’” Hannah said. “At one point, I got them waters while they were waiting for their other family members to get there.”

The wounded woman had a strong pulse, her father later said, and he was able to get her breathing more easily, relieving the most pressing danger. After about five minutes, the ambulance and police arrived and took over.

“I am really proud of how calm my daughter remained, and I’m just glad we were in the right place at the right time,” her father said.

The common cliché that, when a potentially deadly crisis occurs, fear and nerves vanish and pure instinct takes over is true, Hannah said.

“I went into it thinking, ‘I’m going to do anything that I can do, kind of control the controllable,’” she said.

In the most recent news, the victim, 19-year-old Rickiya Compton, was in critical but stable condition in the hospital.

Rizighallah Ivan Khemis, 19, was charged with one count of conspiracy to commit attempted first-degree murder and unlawful possession of a weapon while committing a dangerous felony.