Bad decisions inspire Steve Talley to turn his life around 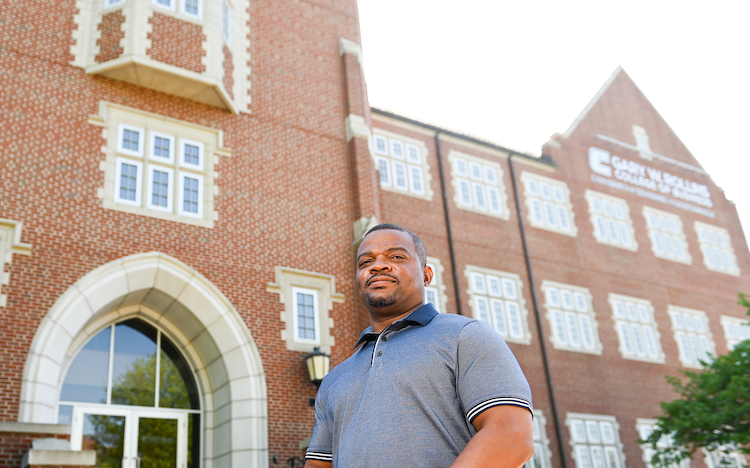 Steve Talley will be earning a bachelor’s degree in marketing.

Steve Talley is a non-traditional student in the truest sense.

Talley, a marketing major who will participate in University of Tennessee at Chattanooga commencement ceremonies on April 21, is closing in on his 50th birthday.

He has four children ranging from a daughter pursuing a Ph.D. to a son who owns a local business to high school teenagers.

He owns a pair of businesses: AB Property Preservation and Mtn. View Hand Carwash and Detail Shop. He has been chosen as Urban League of Greater Chattanooga Minority Businessman of the Year. He has served on former Chattanooga Mayor Andy Berke’s minority business owners task force.

And he accomplished all this after spending nine-plus years in prison for felonious assault.

“People need to see that you can come back,” Talley said. “I’m not embarrassed to talk about it because we all have something to contribute to society.

“I remember hearing a sermon in prison where the Quran tells us, ‘The worst of us are the best of us.’ The meaning is that people who go through adversity end up being some of the strongest and driven people in our society. Sometimes people make mistakes, but everybody deserves a second chance.”

Talley’s story began in the Spencer J. McCallie homes in Chattanooga’s Alton Park neighborhood. As a teenager, he started hanging out with the wrong crowd and getting in a lot of trouble.

“I was making wrong decisions and wrong choices of people to be around,” he said. “It started at the age of 13 with joyriding, auto theft, assaults. Just a whole bunch of mischief.”

When he was 15, Talley was sent to a youth development center on the other side of the state in Somerville, Tennessee.  Shortly after being released, he was in trouble again and found himself in youth detention for another year.

After returning to Chattanooga, Talley gravitated back toward the wrong crowd, which led to a life-changing incident.

In late 1988, his brother was having trouble with another high school-age student, and Talley and his friends decided to take matters into their own hands.

“This guy got into it with my brother, and me and my boys got together,” he said. “We were toting guns, and we went over to the school looking for him. We found him and started shooting, and his mom—who was there—got hit in the crossfire.”

Talley shot her in the side. The woman, whom he knew, survived after undergoing surgery.

He knew right away “that prison wasn’t the place for me, even though I had made terrible mistakes,” he said.

“Some of the stuff my family went through just to visit me in prison was humiliating. I remember my Grandma, who was about 72 then, coming to visit me. She said, ‘I’ve never been to a prison, but I had to come and see you. You’re my baby.’ And then I felt so humiliated when she told me, ‘They made me take all my clothes off.’ They had strip-searched her.

“For my family to have to go through that just to see me was enough to motivate a person not to go back. I just decided, ‘It’s time for a change.’”

He started spending time with inmates who had professional careers before being incarcerated, and they provided him a path.

“Some of the older guys would say to me, ‘You’re young. You can do something with your life,’” he recalled. “So I started studying with those guys. They started educating me on different things.”

One inmate explained that it was time for Talley to step out of his circle and create a different type of stability.

“It’s like when you look at the scales of justice, you’ve got this much bad,” Talley demonstrated, holding his right palm much lower than his left. “Now you’ve got to start weighing it down with other positive, constructive things to achieve a balance.”

Talley took the advice to heart. He spent countless hours in the prison library and earned his GED. He participated in vocational classes like brick masonry and carpentry. He became an inmate advisor. And for the first time, he dreamed of pursuing a college education.

“I would take every class that was available, anything that would help me to start working on myself,” he said. “Drug classes, AA classes, anger management, studying with some of the church groups. Just different things to start balancing things out.”

Talley told his family he wanted to get into business after he got out, so they started sending him such publications as Jet Magazine, Entrepreneur and The Wall Street Journal. He read them in his cell at night.

He also made peace with the person he intended to shoot.

“I ended up running into him in prison and we started talking,” he said. “I expressed to him how sorry I was for shooting his mom, that it wasn’t my intention to hurt her. I acted foolishly and carelessly as a teenager, and it shouldn’t have happened.

“We talked and he said, ‘Man, I forgive you. I talked to my mom and she doesn’t have any bad feelings about you. She just wanted to know why.’”

Talley eventually had the opportunity to talk to her, apologizing in person.

“She told me, ‘I know it could easily have been (my son) shooting your mom. Both of you are traveling the same life. I want to see both of you get out and do something positive,’” he recalled.

Talley assured her that was his plan.

He was paroled after nine years and eight months of prison time. He built a new life, opening a booth at the East Ridge Flea Market and working the third shift at a Chattanooga manufacturer. He was still determined to pursue a college education.

“I knew it was going to take me somewhere, and I knew I had to make an impression on my kids,” he said. “They had the same genes as me, the same background, and I wanted to make sure they didn’t make the same mistakes I did. I knew they needed to see me not talking about doing something but actually doing it.”

After receiving an associate’s degree from Chattanooga State Community College, the bachelor’s degree has been a long time in the making for Talley, taking a course or two at a time after starting his UTC educational experience in 2013.

He acknowledged it hasn’t been easy balancing multiple jobs, raising children and fitting in classes, and there have been a fair share of hiccups along the way. A couple of years ago, he was struggling financially and reached out to Gary W. Rollins College of Business Dean Robert Dooley for help.

“I wrote him a long letter. I told him about myself and what I had been through, and that I wanted to stay in school and finish my degree,” Talley said. “I knew the degree would help me get to the next level—whatever that next level would be.

“Dean Dooley called me into his office and said, ‘I like your story. If you want to go to school, we’ll find a way to keep you in school. I believe in you and I think you’re going to do it.’ I never had anybody believe in me like he did.”

Talley found it motivating to have a dean tell him he could make an impact. Dooley told him he could be a change agent in his community and inspire others. He offered Talley the financial assistance he needed to stay in school.

“One of the things I’ve come to understand with somebody in Steve’s situation is that there’s a lot going on in his life,” Dooley said. “Little things can have a huge impact in trying to complete a degree or trying to finish up a course, but he persevered. This was something he needed to do: Finish his degree.

“Steve certainly doesn’t try to make excuses for what he did, and having a better understanding of the challenges that he has had and what he has been doing in making himself better is a story worth sharing. If we’re here to help people get degrees and completely transform their lives, there’s not a better example of that than Steve.”

In a few weeks, Talley’s dream of a college degree will be delivered as a diploma officially proclaiming him a UTC graduate. It will represent more than a piece of paper; his personal scales of justice still tilt heavier on one side, but Talley feels the balance is shifting.

“Walking down that aisle at graduation,” he said, “will be like I’m at the end of the tunnel. This is the stuff I dreamed of.”

But he’s not finished. His plans moving forward include pursuing an MBA, going to law school and helping inspire those who need a second chance.

“I want to give back and start doing public speaking and consulting for non-profits and at-risk individuals,” Talley said. “I think it is important for individuals like me to see that there are options, and change will come if you’re in pursuit of it.

“A lot of my opportunities have come from people who know my story, so I don’t run away from it. I was able to come up out of it. Now that I’m completing my degree, I can tout what education has done for me.”