‘I’m going to show all these people that they can do it,’ Lawson says 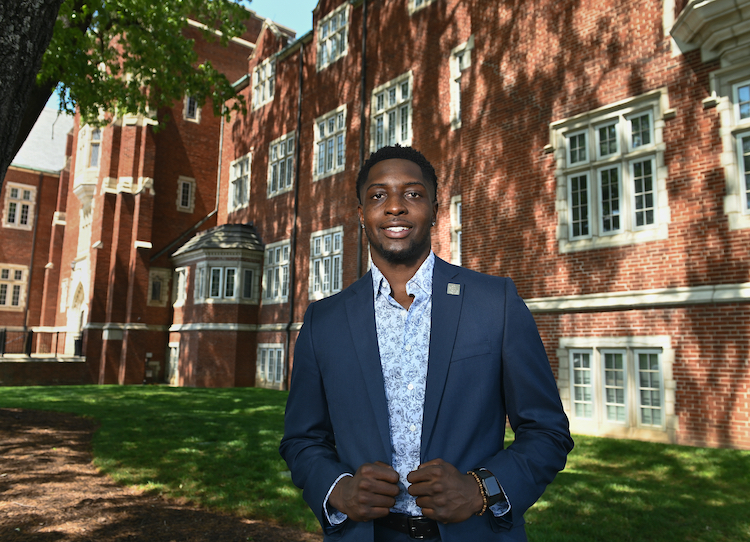 Jerrell Lawson has both worked towards an MBA and played defensive back for the Mocs football team.

Growing up, Jerrell Lawson often pictured getting out of his small country town of Brundidge, Alabama, and seeing the world.

He noticed that people in his area didn’t focus on education. They worked and they hung out, but they weren’t motivated to leave town.

He was different. He could see where he wanted to be and decided that education and athletics could lead him places. He immersed himself in his academic studies and participated in sports year-round

He also wanted to make his mother proud, ensuring that the discipline she instilled in him would pay off.

On Sunday, April 25, Lawson will walk in University of Tennessee at Chattanooga Graduate School commencement ceremonies at 1 p.m. in McKenzie Arena. A four-year starter at defensive back on the Mocs football team, he is closing in on a master’s degree in business administration from the Gary W. Rollins College of Business.

Receiving an MBA is no small feat. Doing it while playing Division I college football is relatively unheard of.

“I wake up every day thinking, ‘I’m going to show all these people that they can do it. That you can be playing football and go all the way to get your master’s,’” said Lawson, a three-time Southern Conference All-Academic selection who received his undergraduate degree in business management from UTC in spring 2019.

“I feel like a lot of this was time management, knowing when and when not to do things. There’s a time and a place for everything.

“There’s a time to kick it and relax and laugh with the boys, a time to be focused on workouts and football and a time—and it has to be mandatory—when you do your schoolwork, especially being in grad school.”

Lawson didn’t garner much college attention growing up in Brundidge, a town of about 2,300 located about 10 miles from Troy, Alabama. To put that number in perspective, undergraduate and graduate students enrolled in the Gary W. Rollins College of Business at the start of the 2020-2021 academic year was slightly more than 2,300.

At Pike County High School, Lawson graduated third in his class and was a member of the National Honor Society and Phi Theta Kappa Honor Society. He starred in multiple sports, lettering in football, basketball, baseball and track.

Being from a small school, Lawson said he needed strong grades to help himself stand out.

“A lot of coaches didn’t even take the chance to stop by our school because we were so small,” he said. “School isn’t as tough as everyone makes it seem. The only thing you have to do is just go do it.

“I’ve always been a good student, and I’ve always taken football super-serious. I just love the game. I found a way to use my grades and my academic talents to make myself stand out.”

In the process, he became the first person in his family to take dual-enrollment classes, an indicator of his dream to create a different life for himself.

“Where I come from, I have a huge family. I had a grandmother who had nine kids, and my great-grandmother had 10 kids, and a lot of people don’t have a lot of things to look up to,” he said. “Not many people just got out and away from the city.

“Being able to get out, come here to Chattanooga and be pretty productive while being here is a blessing and an honor.”

During his time at UTC, he has become the first member of his family to graduate college. Now, he’ll be the first to have an advanced degree.

He credits his mother, Gwen Lampley, a single parent of three, for instilling his work ethic.

“I have to send kudos to my mom for the way she brought me up,” he said. “Getting that MBA is huge, and I know my mom really appreciates it, and hearing a lot of people talk nicely about me makes her day.

Lampley said she is looking forward to making the trek back to Chattanooga for the commencement proceedings.

“A lot of kids coming out of single-family homes don’t achieve as much as he has, but I believe in God, and I give God all the praise,” she said. “He’s always loved sports, but he has always loved his grades, too. For him to juggle them at the same time, it just makes me ecstatic.”

Many younger kids from the school and her town look up to her son for what he’s accomplished, she said.

“He really doesn’t see himself as a leader, but a lot of people look to him for that leadership and stuff like that.

“He was always encouraged by teachers from school to try to get into the leadership roles, and people look up to him and the things he is doing. I love it. I think it’s great.”

People looking up to him has continued during his time at UTC. Lawson admitted he was surprised at how others responded to him and another Mocs football player, former quarterback Nick Tiano, when they started the MBA program in September 2019.

“Our coaches tell us all the time that student-athletes have this face on campus that we don’t even know about,” Lawson said. “We would be going to football practice with 17- and 18-year-olds, laughing and joking with them and having a good time, and then have to switch it over and get ready to go to grad school.”

Graduate school had its own set of surprises.

“We’re in there with people who have full-time jobs, they’re using grad school to develop their careers, and these people wanted to do their group work with Nick and me. We were just shocked.

“Just introducing ourselves to our new classmates was a different experience. These people understood us and were looking forward to working with us. It helped me to adapt and be a better person and just get ready for the real world.”

8 Comments » for ‘I’m going to show all these people that they can do it,’ Lawson says