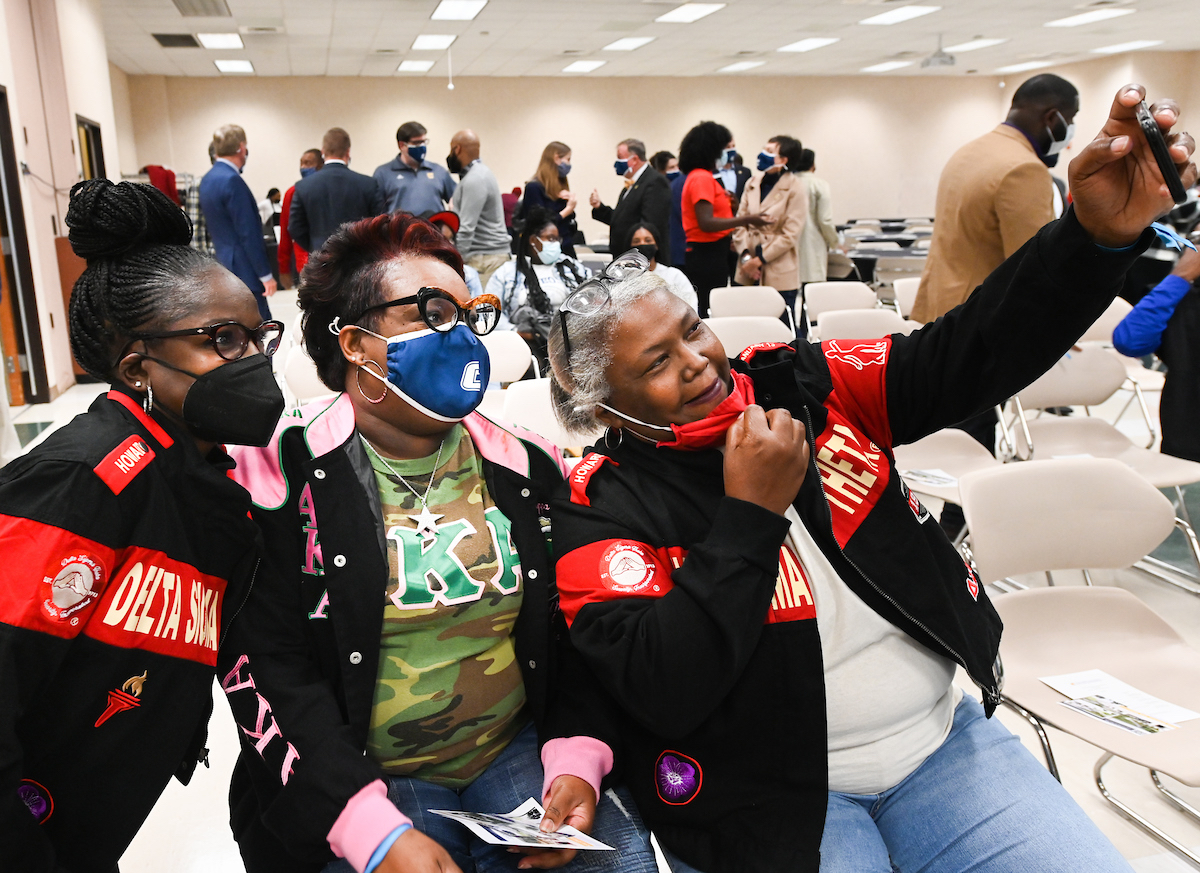 Drawn by the promise of promoting civil rights and diversifying the campus, five historically African-American fraternities and sororities arrived at the University of Tennessee at Chattanooga 50 years ago.

A ceremony commemorating the 50th anniversary of those five Greek organizations and announcing the establishment of UTC Divine Nine Heritage Park was held Friday, Oct. 29, in the University Center’s Chattanooga Room.

“Divine Nine” refers to the nine historically African-American fraternities and sororities in the United States and in 1971, just two years after UTC was formed through a merger of the University of Chattanooga, Chattanooga City College and the University of Tennessee System, those organizations began establishing chapters at UTC. They are members of the National Pan-Hellenic Council (NPHC), their national governing and coordinating council.

Eight of the “Divine Nine” now have chapters at UTC.

Once completed, UTC Divine Nine Heritage Park will be located at the on-campus intersection of Vine Street and Terrell Owens Way, adjacent to the University Center.

“We are here today for a groundbreaking, but also to reflect on who we are as an institution and make a statement about what we value as a university,” Angle said. “As a community today, we celebrate the visionary men and women who brought something extraordinary to this campus over 50 years ago. We salute their accomplishments that live on in the daily life of our University, and we celebrate their legacy of leadership.

“The real groundbreaking took place about a half-century ago.”

The Omega Psi Phi fraternity was the first of the “Divine Nine” to make its way to UTC, with the local Eta Beta chapter founded on Feb. 27, 1971. Three weeks later, on March 20, Alpha Kappa Alpha sorority’s Zeta Kappa chapter was founded on campus.

In addition to those five Greek organizations, three other NPHC members have been on the UTC campus since the 1980s: Kappa Alpha Psi fraternity (1982), Phi Beta Sigma fraternity (1983) and Sigma Gamma Rho sorority (1984).

“Once a young woman or young man joins a Divine Nine organization, she or he is engaged for life in transformational leadership and service,” Angle said, “and I think you see that as evidence with all the people we have in attendance tonight.”

Angle called those organizations a key talent pipeline for UTC, citing numerous leaders who are graduates of the institution and members of NPHC fraternities and sororities:

“This space will serve as a lasting tribute to the legacy of these trailblazers and game-changers and an inspiration for generations to come,” Angle said. “The UTC Divine Nine Heritage Park will be a monument and a destination. I hope that at times it will be a quiet place for reflection and, at other times, a site of joyous celebrations.

“It is no coincidence that it is right here in the physical heart of our beautiful campus.”

Freeman, adorned in a black Alpha Phi Alpha sweater, paid tribute to the alumni of the NPHC organizations, calling them “the absolute best minds and hearts of our community.”

“My heart is full because this is really a dream come true for me, for this campus and for this community overall,” said Freeman, who earned bachelor’s, master’s and doctoral degrees from UTC.

“The value of our Divine Nine organizations is that they allow students to see themselves and to be represented in ways that they can find their niche. This park will be a lasting reflection of the impact and the power and influence of the NPHC community.”

Chattanooga City Council members Isiah Hester and Raquetta Dotley, both alumni of the University and members of NPHC organizations as students, read a proclamation on behalf of Mayor Tim Kelly declaring Oct. 28, 2021, as NPHC Day.