Coming to America: International students are more than just visitors

Imagine if it’s not just a brief visit for fun, but to stay, live and learn.

Currently, 113 students from 41 countries are living and learning at the University of Tennessee at Chattanooga. Their home countries include India, Sudan, China, Saudi Arabia, Bangladesh, Argentina and Canada.

International Education Week began Monday, and three students who left their home countries specifically to be at UTC say coming to the United States—and the South in particular—taught them lessons beyond the classroom. 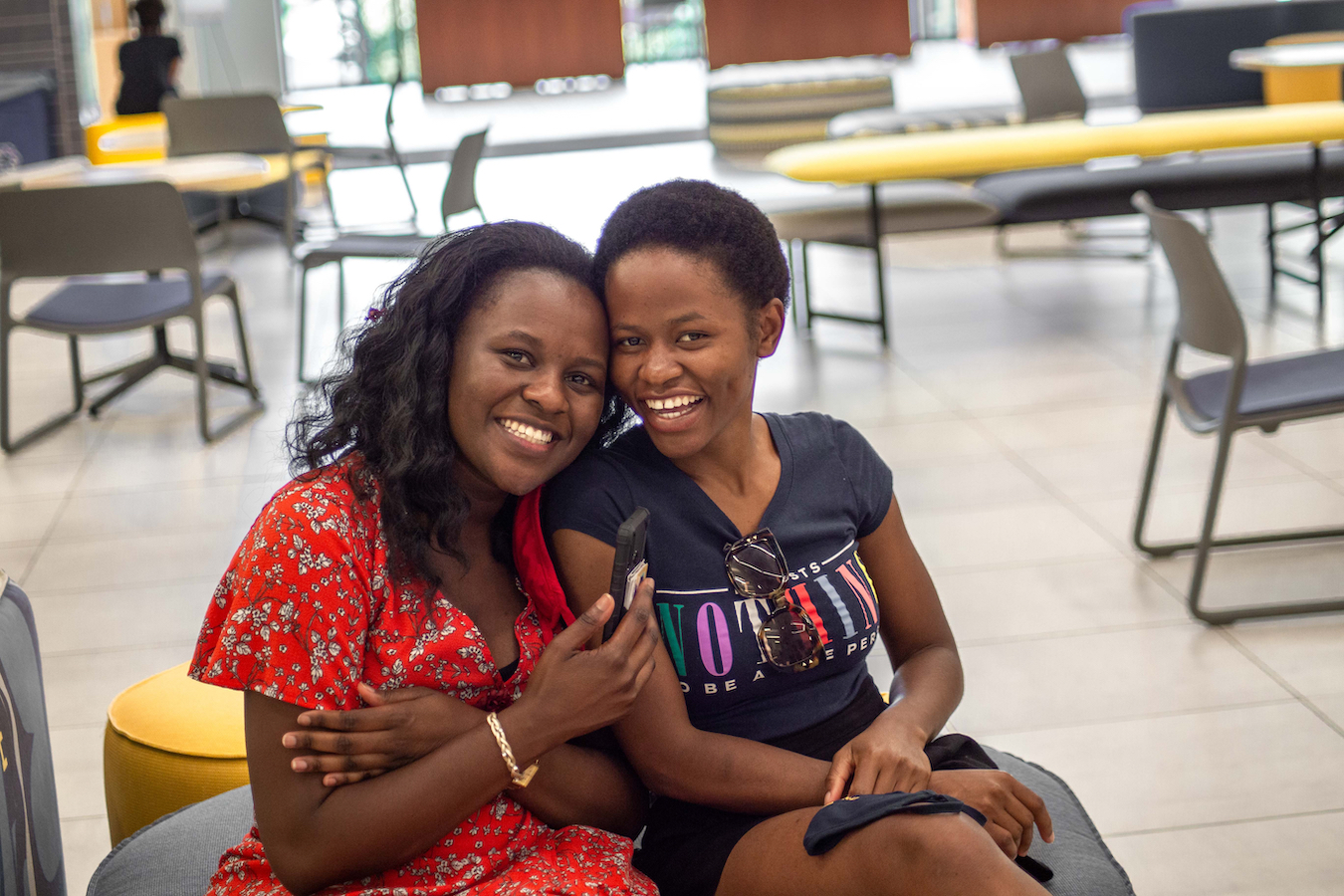 Grace Nansamba, right, and Evelyn Namugwanyak are both from Uganda.

In 2018, Grace Nansamba left her African home in Uganda to pursue a career in computer science at the University of Tennessee at Chattanooga.

She hasn’t been home since.

“That’s the best gift that God can give me is just to go home and see my parents and my family and my friends,” said Nansamba, who earned a master’s in computer science in December and is now working toward a Ph.D. in computational science.

She planned to return to Uganda last year, but school and COVID-19 took the chance away.

“I had to finish up some of my coursework. I had a thesis which was not yet done, and I couldn’t go at the beginning of the summer. I thought I would go later, but then COVID came in.”

She also intended to return this summer but landed an internship at Lawrence Livermore National Laboratory in California. “A very good opportunity for me,” she said.

She first heard about UTC from her brother-in-law, Maxwell, who enrolled in the University in 2016 to earn a Ph.D. in computer science.

A communications officer at Makerere University in Kampala, Uganda, he had received emails that detailed the UTC SimCenter’s research and high-level equipment for computer science. He received a scholarship, came here and, two years later, Nansamba did the same.

Before arriving in the U.S., she had learned about some elements of the culture from her brother-in-law, but she came here without set expectations.

“I just knew I was going to America, pursue my degree and live my life,” she said.

Once here, she was immediately struck by kindness.

“It sometimes overwhelmed me,” she said. “I would call my parents and tell them, “People are so kind.’”

The Center for Global Education at UTC was especially helpful, she said.

“They would tell you, ‘Here is where to find this,’ and they had guides. They just said, ‘Oh, I’ll take you to that place,’ then they would go with you.”

Without being asked, people brought her household cleaning products and other home necessities. They invited her to game nights, hikes and dinners.

When it came to eating, though, she had to make adjustments.

“Everything has sugar in it. In my country, food goes with salt; tea goes with sugar.”

In Uganda, dinner is often a plantain-based dish called “matoke.” Beef, chicken or beans can be included or a paste made from ground nuts, she said.

Here in the U.S., she adjusted to sugary foods, but tries to stay away from them, she said. But pasta—especially lasagna—and cheese are new loves.

“There’s not much cheese in my country, and I love it. It’s yummy. And, of course, a lot of rice and burgers, but I don’t eat that a lot because I’m tending to be vegetarian.”

The large selection of fruit at lunch and dinner also were a surprise to her, she said. In Uganda, fruit usually is not eaten at meals because it’s handy.

“We have the trees in the backyard, so we just go pick a mango at any time of the day and eat it separately. It’s not part of the meal,” she said.

When she earns a Ph.D., she plans to return to the familiar culture of Uganda, although she admitted plans may change.

“Maybe if I find something really huge that holds me from going,” she explained, “but I would ultimately want to go back home, be with my family and do something good in my country, apply some of the things I’ve learned.” 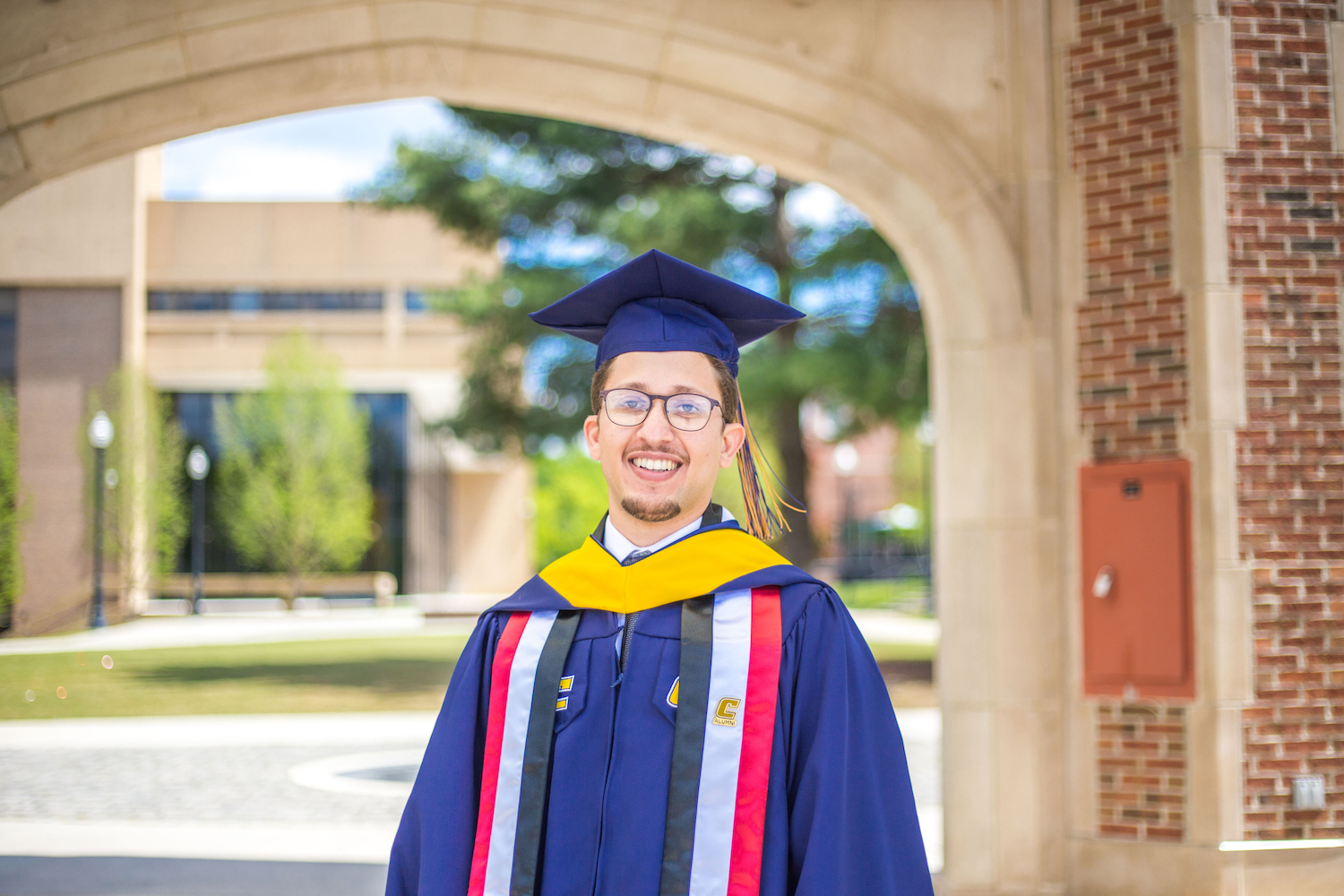 “Southern hospitality is actually a thing,” said Moataz Abdalla, who is earning a master’s in mechanical engineering.

Before coming to the University of Tennessee at Chattanooga in fall 2019, Moataz Abdalla had never left his home country of Egypt.

Not for vacations. Not for conferences. Not to visit relatives.

After arriving at UTC to earn a master’s in mechanical engineering, he learned a specific requirement for living in the South.

“You must have a truck at some point in your life!”

He laughs and quickly adds two other regional characteristics he discovered.

“Southern hospitality is actually a thing,” he said. Plus more respect is given to the elderly “and they’re addressed by ‘sir,’ ‘ma’am.’

“People are actually so sweet, and random people can smile at you in the street saying ‘Hello, how’s it going’?” and I think to myself that they’re actually asking how I’m doing, and I’m supposed to give them a brief report of my day.”

He came to UTC for the chance to work as a research assistant in the College of Engineering and Computer Science, he said.

“I definitely enjoyed my time at UTC, especially the activities we could do in town like outdoors activities and the trips that some student organizations offered,” he said.

Before boarding the plane for the U.S., he hadn’t spent much time thinking about American culture and its differences to Egypt. It didn’t seem a crucial conversation.

“I had some friends, yes, but we did not discuss what to expect because it’s kind of intuitive that it’s a whole lot different world and culture,” he said.

“One of my own expectations was that it will be hard for me to blend in and make friends.”

He was very wrong, he said.

“It turns out that people and the roommates I had were really welcoming and I could make tons of friends, both international and American students.”

One thing that did surprise him—and amused him, too—was something many Americans don’t even notice.

“‘Automatic flushing’ is a big one,” he said, laughing. 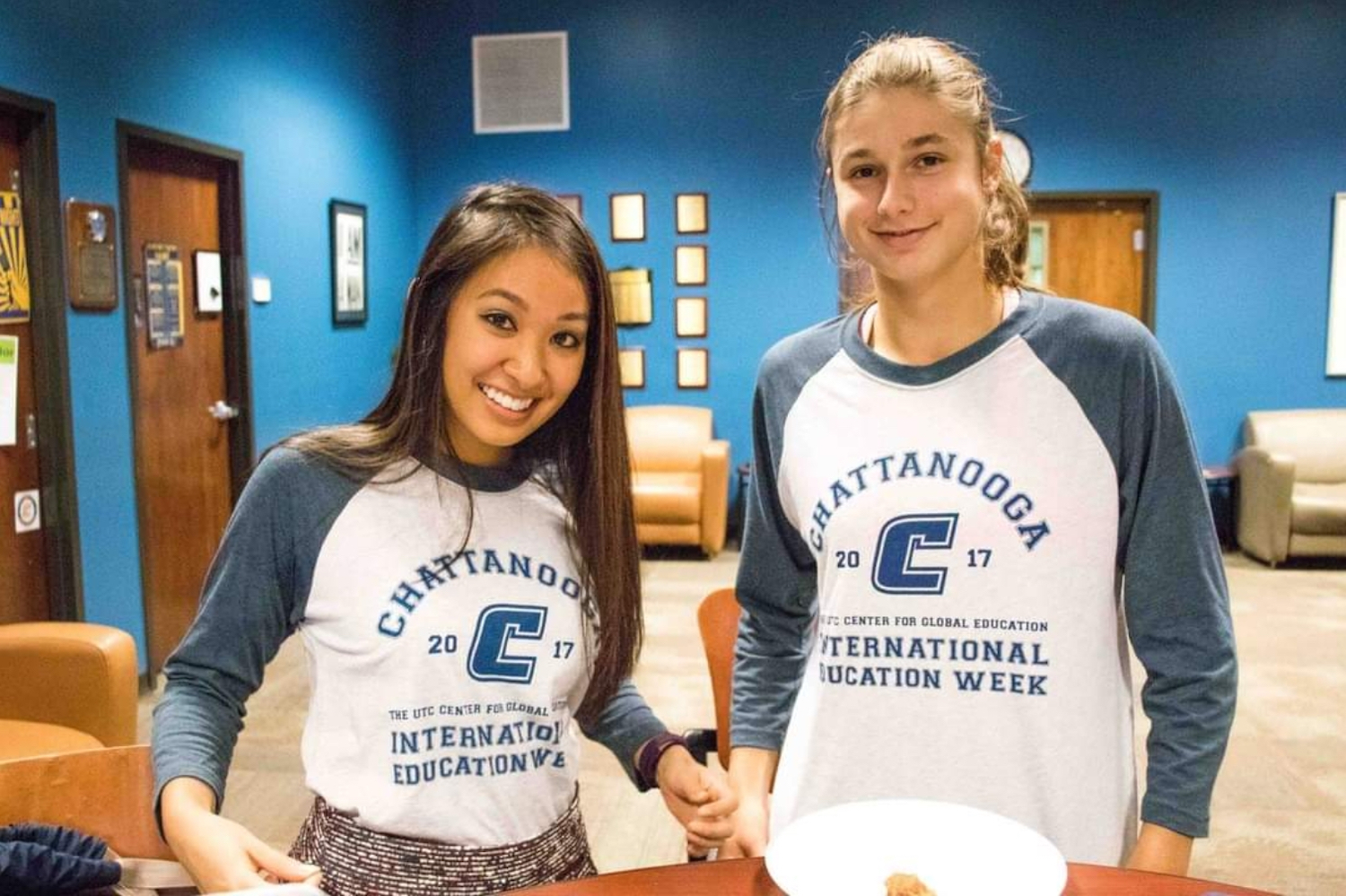 Emma Van Hee, right, is pursuing a master’s in data analytics. To her left is Lynna Nguyen, a UTC alum who worked as a graduate assistant in the Center for Global Education.

Before Emma Van Hee arrived in the United States from her home in Belgium, she had heard a few things about America.

The people are welcoming. The food is greasy. Portions are gigantic.

Yep, yep and yep. All spot on, she said.

“But Belgium is also a western country, so the culture isn’t too different,” she said.

Until she arrived at University of Tennessee at Chattanooga, her only visit to the U.S. was a trip in 2016 as a senior in high school. She enrolled in UTC in fall 2017 and earned a bachelor’s in economics in spring 2021. She’s returned this fall to begin a master’s program in data analytics.

Having lived here for four years, she has become familiar with the quirks of America compared to Belgium. Once again, food is one of them.

“Everything is just fried,” she said without making a judgment call on whether that’s good or bad.

In spite of that, she enjoys that food is always available here and Americans won’t hesitate to get it.

“I like that in the U.S., people go out to eat a lot—even if it’s just something fast—and that restaurants are open all day.”

In some European countries, businesses may close for the afternoon to give employees a break.

“We cannot walk into a restaurant at three or four in the afternoon in Belgium,” Van Hee explained.

In the U.S., the South has its own quirks in addition to the overall American ones, she said. Politics and religion are often topics of conversation, but she said she steers away them when they come up.

She also has picked up on Southern accents and can distinguish subtle differences.

“When I first got to Chattanooga, I couldn’t hear the different accents,” she said. “Now I can hear when someone is really Southern. I think I can pretty much understand everything, even if the Southern accent is very thick. “

3 Comments » for Coming to America: International students are more than just visitors