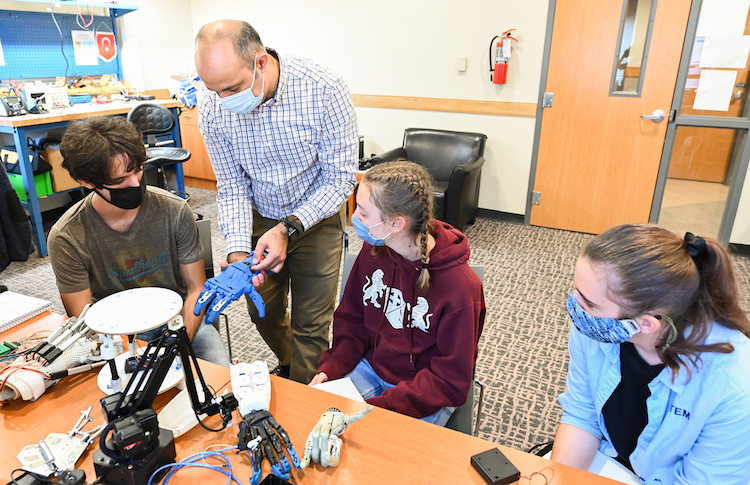 “In theory, it should work,” Kayla King says.

“Yeah, it’s the ‘in theory’ part I don’t like,” Mason Harvey replies.

It’s not “in theory” that six students from the STEM School Chattanooga have four weeks to design and build a prosthetic hand to replace a hand no longer there or an exoskeleton to fit over a severely damaged arm. Nor is it “in theory” that the students are confident they can do it.

“I’ve done robotics since fourth grade, so I’ve been used to designing different things and building them,” said junior Gerald Arden Freeman, one of the three students working on the exoskeleton.

At the start of the students’ eight-week internship, Associate Professor Erkan Kaplanoglu at the University of Tennessee at Chattanooga wondered if the biomechatronics project might be too difficult to grasp for high school students—even those from the STEM School Chattanooga. But he now admits he was wrong. The students—two seniors, four juniors—are sponges, eager to absorb whatever information he can throw their way, he said. They want to learn.

“It doesn’t matter if they’re Einstein or Newton if they’re not motivated,” he said.

The students were selected by the STEM School Principal Tony Donen, Counselor Anna Millard and Science Teacher Shannon Siegle. The six were chosen for their strong academics, technical skills and ability to work as teammates, Millard said.

The goal of the internship is for the students to come out of it with university-level experience as well as knowledge that can be applied in the real world, she said.

Kaplanoglu’s goals are much the same.

“I am hoping they learn the basic knowledge about biomechatronics, which aims to eliminate the health and lifestyle problems that affect individuals with physical disabilities, and the design steps in this regard,” he said.

For the work, students are divided into groups of three. In the College of Engineering and Computer Science building, the tables for both teams are scattered with various wires, computer chips, 3D-printed pieces and other pieces of tech. Each group has a computer loaded with software that flips, spins and rotates their hand or exoskeleton design into whatever position is needed.

At his table, Harvey turns his own hand over to look at his palm then at his computer screen then back at his palm then back at the screen. He’s in the prosthetic-hand group and already has 3D-printed its palm, a square block now laying on the table. He’s figuring out the proper size for the tiny motor—a servo—to fit into the palm to control the movement of the fingers.

“The biggest issue is fitting a good-sized servo in it. I’m sizing it to my hand, so this servo takes up a quarter of my hand. It gave me about as much room as I’d expect,” he said, pointing at the one on the computer screen.

“We’re actually going have a different palm design where the motors are going to be inside it, so we’ll hopefully cut down on weight, and it’ll make everything a bit more compact.”

Junior Riley Brown is on the team building an exoskeleton and, while biomechatronics might not seem to fit her goals since she is interested in a career in neurology, she explained, there’s a connection.

The exoskeleton will attach to the arm muscles and respond to their nerve impulses. Electromyography (EMG), one of the diagnostic tools of neurology, assesses the health of muscles and the nerve cells that control them. It can reveal nerve dysfunction, muscle dysfunction or problems with nerve-to-muscle signal transmission.

“What we’re doing can be related to the study of the brain, like using different EMG or controls,” she said. “Ours isn’t specifically doing that, but I thought biomechatronics was something cool, and I’d like to try it out to see if maybe this would be something that I’d like to do.”