by UTC Communications and Marketing November 5, 2010

Hedge fund manager and published author Lauren Templeton, founder and principal of Lauren Templeton Capital Management and Maximum Pessimism, LLC, will serve as Director of Finance for the Future, a new initiative at The University of Tennessee at Chattanooga’s College of Business. 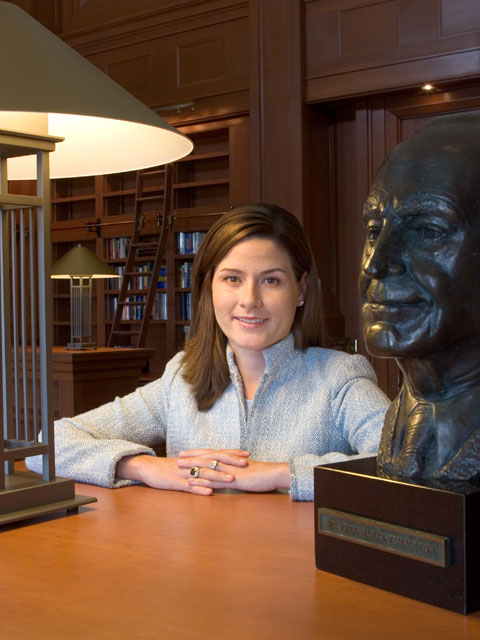 Finance for the Future will deliver academic and practical experience in the study of trading and portfolio management, with particular emphasis on the perspective of women in financial decision-making and successful trading practices. Students will learn both the art and science of finance with emphasis placed on a behavioral-based understanding of trading.

In 2009, UTC recognized donors Renée Haugerud and her husband John H. Murphy for their $1.5 million project development gift, which created a transformational opportunity for the UTC College of Business to develop this global finance center.

Renée Haugerud, is Founder, Chief Investment Officer and Managing Principal of Galtere Ltd., a registered investment advisor that manages commodity-based global macro strategies.  Haugerud is noted for her methodology that combines a diverse profile and theme investment strategy and risk management.   An early focus on grain markets and bio fuels, and a belief in the potential of commodity markets since the late 1990s have been among the hallmarks of Haugerud’s successful investment career.  Haugerud began trading in the global financial and commodity markets in 1980 for agriculture and food giant Cargill Inc.  Her trading tenure started in the cash commodity markets focused primarily in the United States and Canada.  Her interests in the relationship between financial markets and geopolitics spurred the rest of her career and led to international posts in Geneva, Canada, the U.K., and Australia.   Haugerud’s insight into how global markets are affected by the psychology and relationships of macroeconomic trends makes her a sought-after speaker and panelist at global investment events.   Read more…

John H. Murphy or “Murph,” as he is affectionately called by friends and colleagues, came to UTC as a walk-on student athlete in football earning a scholarship and lettering all four years.  After briefly attending a tryout camp with the Dallas Cowboys, he was hired by Hospital Corporation of America to help open a new hospital in the Dallas area.  John’s next stop was in Columbus, Georgia, where he helped open the Hughston Sports Medicine Hospital.  After a move to HCA headquarters, and working on a joint venture between The Equitable and HCA, John joined Equitable.  While at Equitable, John worked in Retail Distribution and was involved in creating top sales organizations throughout the country, winning numerous awards in every location.   John became President of the prestigious AXA-Equitable Old Guard, and later helped with the transition of a new AXA CEO while working in AXA’s New York City Headquarters.  After retiring from AXA in 2003, and hearing once more the entrepreneurial call, John started a mortgage company in LaGrange that became one of the area’s top mortgage lenders.  John was invited to rejoin AXA in Atlanta for two years before again focusing on entrepreneurial endeavors, special projects, and on his continued involvement with his favorite charities.   Read more…

Templeton brings a background of trading, value investing and behavioral finance to the UTC College of Business.  She has explored these topics with higher education academicians as well as researchers funded by the John M. Templeton Foundation.

As a child, Templeton began investing under the heavy influence of her father as well as her late great-uncle, Sir John Templeton.  Professionally, she began her career working with managed portfolios and investments in 1998, starting as a junior associate at the financial advisor Homrich and Berg and later the hedge fund management company New Providence Advisors, both of Atlanta.

In 2001, Templeton launched her own hedge fund management company which dedicates its efforts to the practice of value investing across the global markets.  She uses the same methods she learned from Sir John Templeton.

Lauren Templeton is also the founder and president of the Southeastern Hedge Fund Association.   She co-authored the book, Investing the Templeton Way: The Market- Beating Strategies of Value Investing’s Legendary Bargain Hunter, 2007, McGraw Hill, which has been translated into nine languages.

With her husband, Scott Phillips, Templeton lives in Chattanooga. Phillips is a portfolio manager of the Global Maximum Pessimism Fund and he recently wrote the book Buying at the Point Maximum Pessimism: Six Value Investing Trends from China to Oil to Agriculture, 2010, FT Press. The couple produces a quarterly investment report titled the “Maximum Pessimism Report” which is distributed worldwide.

Templeton is an active member of Rotary International and the John M. Templeton Foundation.  Locally, she is on the Board of Trustees at the Baylor School and the Finance Advisory Board of The University of Tennessee, Chattanooga.

The couple enjoys spending their free time with their nineteen-month-old daughter Mary Handly.