A summer of monkeys: ‘Absolutely this is what I want to do’ 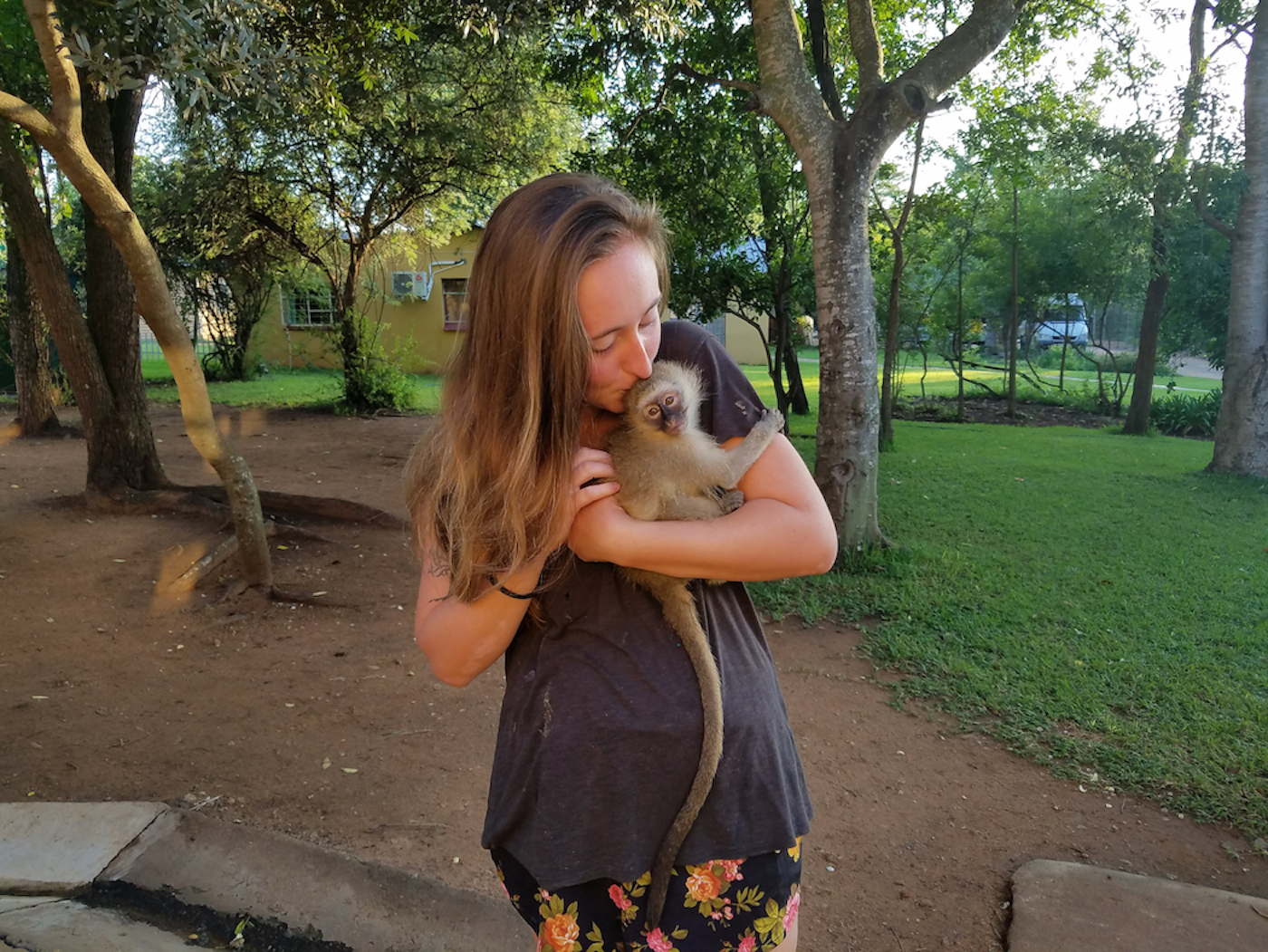 Rachel kisses Chika, a vervet who “chose” her as a surrogate mom.

Rachel Fuller had no choice. She had to bite the baboon.

In Baboon World, when a baby or younger animal gets too rough while playing or is just plain annoying, an adult will nip it at the base of its tail, Fuller says.

“It will be a quick bite; it won’t be like a dog biting something and shaking it. It will be like”—snaps fingers—”‘Stop it!’ It’s like a slap on the hand.”

In this case, a baby baboon was biting a bit too much when roughhousing with Fuller.

“I had to take hold of him and bite him and hold him down and show him that, ‘You need to calm down. As soon as I come into that enclosure, I am the alpha.’”

Learning how to discipline young baboons and vervets—the small monkeys you often see sitting on people’s shoulders—was one of the least important lessons Fuller took away from her time at Riverside Wildlife Rehabilitation and Education Centre, a rehabilitation facility in South Africa. A major in anthropology with a minor in biology, she worked there for a couple of months in 2017 and returned for a February-through-June residency this year.

“Going there that first time, it made me realize: Absolutely this is what I want to do,” says Fuller, who graduated from UTC in May and plans to earn a master’s in primatology.

Riverside takes in orphaned babies or injured adults and those who have been pets or used in medical testing and, once they’re ready, releases back into the wild, she explains. But the animals are not just driven miles away and unceremoniously dumped on the side of the road, she explains.

Long before they’re released, they’re introduced to other primates with the hope of forming a cohesive group, known as a troop.

“We want them to form a successful troop, which is grooming, copulating, babies, all of these different things,” she says.

Forming a troop can take years, and workers at Riverside keep an eye on them to make sure everyone is properly accepted and acclimated to the way things work in the real world of primates, Fuller says.

“The thing about the introduction stage is that they are put in and we have to monitor them day and night to make sure they’re not harmed. Baboons and vervets are territorial.”

She doesn’t like the word “aggressive” when describing their actions; “protective” is more accurate, she says, because the animals generally fight only when other troop members are harassed or attacked, or males are jockeying to be the alpha member.

Fuller acknowledges, though, that even if baboons are just playing, it’s not something a human wants to join.

“It’s just roughhousing for them, but it could absolutely tear us apart, get chunks out of us,” she says. “Adult male baboons have bigger canines than a lion. … The average strong human man is nothing to compared to a female baboon.”

Fuller has a small scar on her right thigh that was caused by a vervet, but it wasn’t a case of the animal attacking her, she says, it happened during playtime.

“I was throwing them in the air and one of them just snagged its tooth on me. Not even a canine,” she explains.

But she also has a monkey mark that she put there herself. On her right ankle is tattoo made from the handprint of a special monkey, a vervet named Chica that Fuller raised as a baby.

“I called her my cheeky Chika,” Fuller says with a smile. “Every morning I would take her out and I would hold her. She was a little baby and I would feed her flowers or give her acorns. We would be mother/daughter.

“You take care of it like it was a human baby, so you hand-rear them, but you have to be careful with that because they’re still wild animals. Yes, an emotional attachment is required for primates because they are highly intelligent creatures. They need emotional care and support.”

But as Chika got older, she started pulling away, a totally natural thing for her to do, Fuller says.

But the separation still was painful, she adds.

“It’s heartbreaking to us because you love them. She would come up and touch my hand or try to groom my hair through the fence, but she didn’t see me as her mother anymore.” 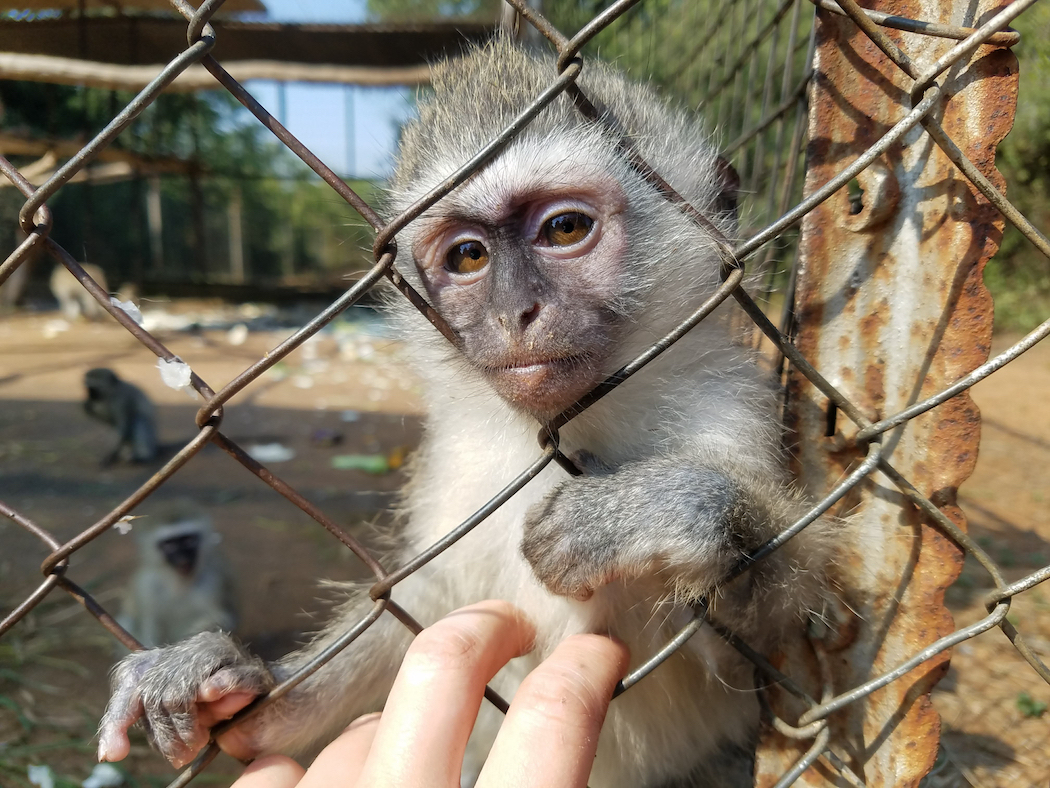 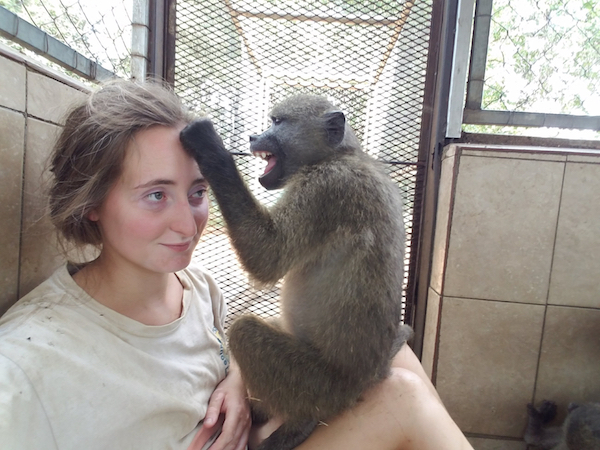 Kiwi the baboon grooms Rachel, looking for bugs, ticks, lice and any wounds that need cleaning. Grooming is a way for baboons to bond with others in their “troop.” 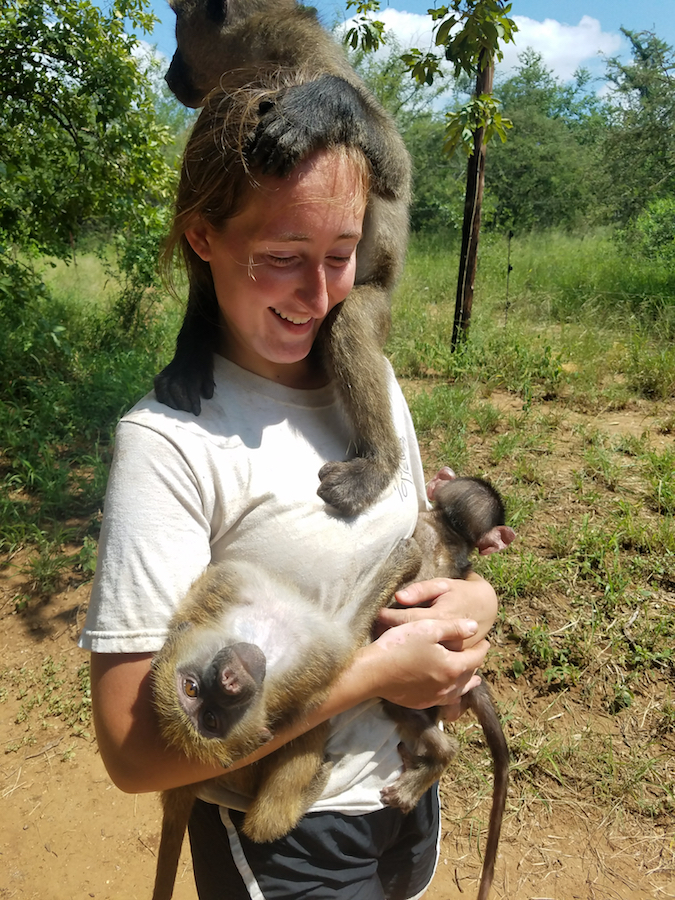 On the morning “baboon walk,” three of them decide they would rather be carried than walk. 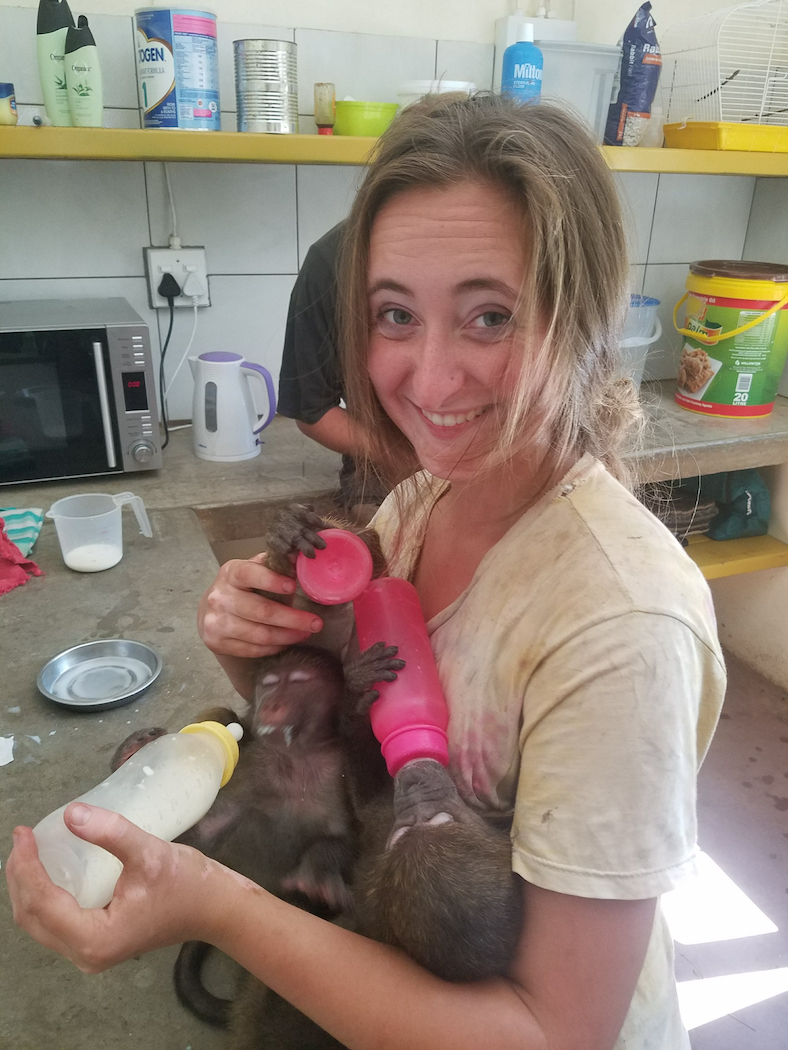 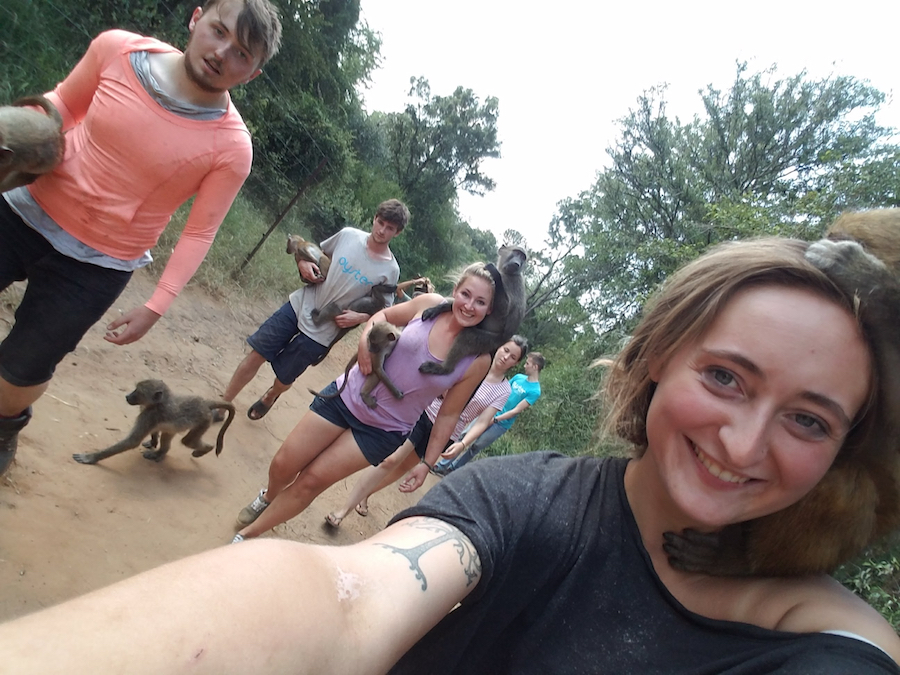 The “baboon walk,”on a “baboon walk,” This walk lets them get extra exercise and perform instinctual acts, such as swimming in the river (which baboons love!), foraging, climbing, etc. 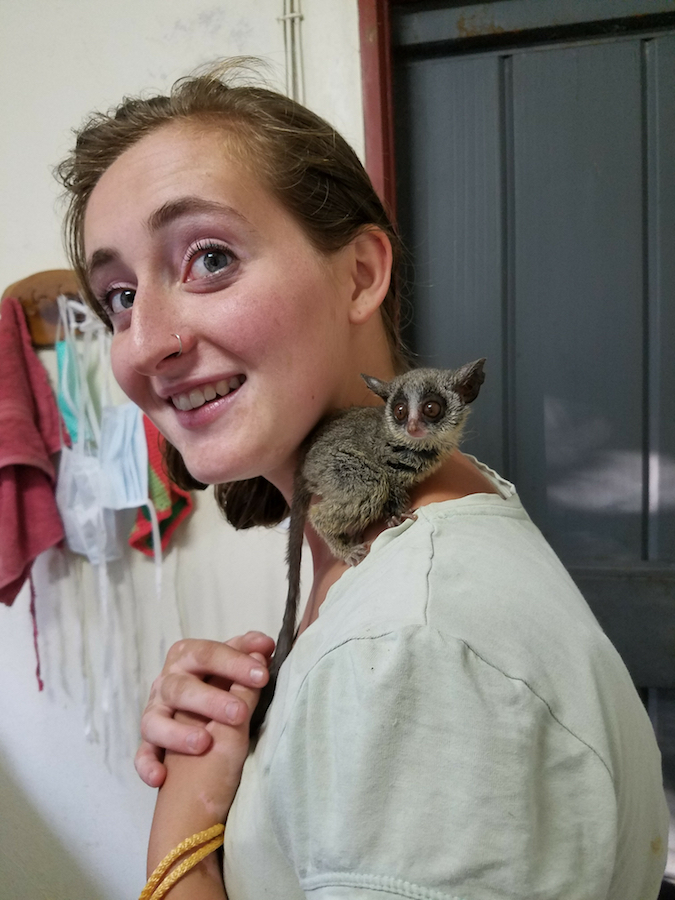 A bushbaby is a primate but is sometimes mistaken to be a relative of squirrels. 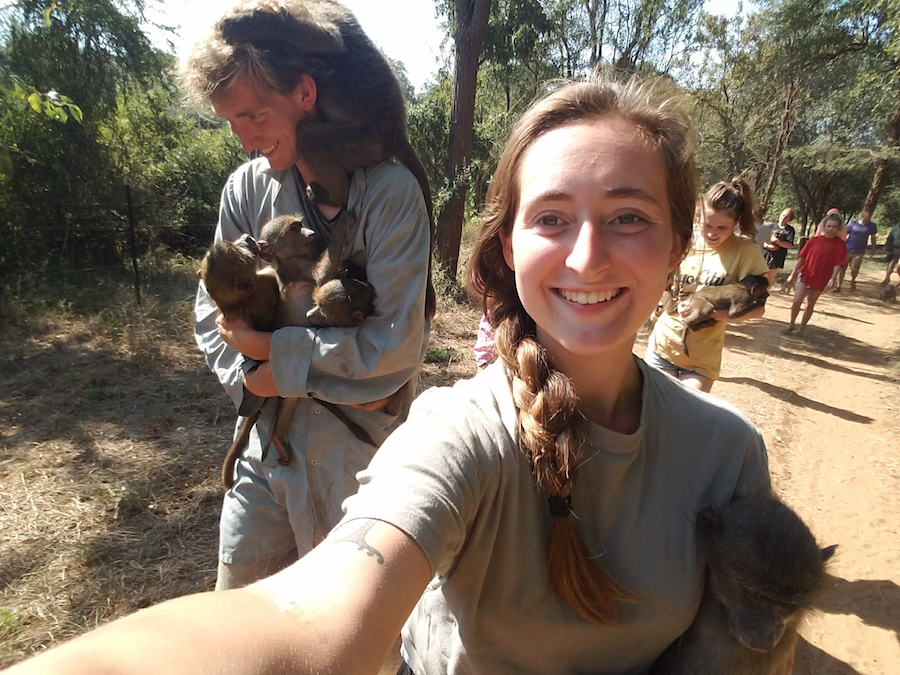 Volunteers at the Riverside Wildlife Rehabilitation and Education Centre in South Africa come from all over the world, including the U.S., Germany, France, the U.K. and the Netherlands.
Media Relations Contacts: Email Shawn Ryan or call 423-425-4363.

2 Comments » for A summer of monkeys: ‘Absolutely this is what I want to do’