Exploration and experiences are touchstones in Bruce Shaw’s life 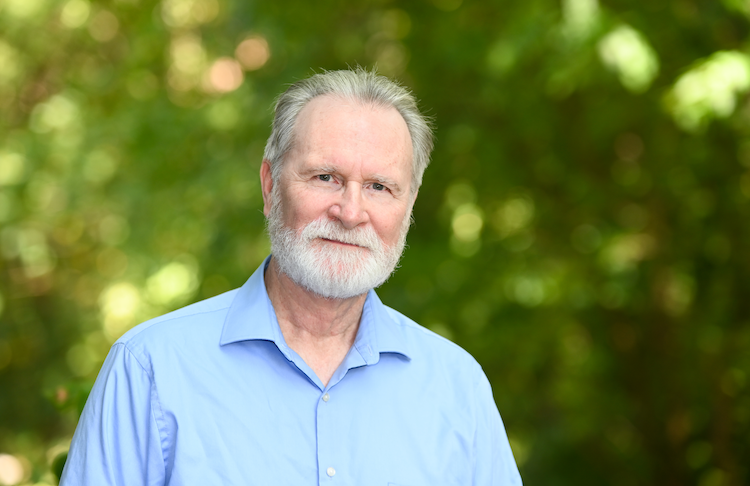 In December, Bruce Shaw graduated with a bachelor’s degree in integrated studies, integrating communications and theater.

Bruce Shaw didn’t even know he’d been entered in the contest when he won the 2018 Associated Press award for TV Investigative/In-Depth Reporting by a college student.

“Recognition at that level was not something that had ever crossed my mind,” says Shaw, 68, who graduated from UTC in December with a degree in communications and integrated studies.

His report, “Mental Health: One Woman’s Story,” was a class project and focused on UTC student Jessie Knowles, who had problems adjusting to college life, needing counseling and other help to get through. She has since turned her experiences into a one-woman show, “Jessie’s Messy Mind.”

“She faced some significant mental health issues to get through her master’s,” Shaw explains. “So what I did was bring in the idea of students here being away from home, perhaps for the first time. They start having these kinds of issues and they may not know how to deal with them, what resources are available, and to know that it’s OK to use them.

“My perspective tends to lead me to pay close attention nationally and locally to those types of issues. It’s the concept that society is measured by how it treats those who are most vulnerable,” says Shaw, whose wife, Bonnie, is a music teacher at Chattanooga School for Arts and Sciences.

Graduating from UTC is something of a second life for Shaw. Actually, that’s not quite accurate. It’s more of a fifth or sixth life.

His extensive resume includes stints in theater and performance art, decades of development in computer-based technologies, a line worker at Amazon and multiple stretches in college. It took him three tries to graduate from UTC, not because he couldn’t do the work, but because his focus kept swerving into areas other than college.

“It’s not like I’ve gone down a single path,” he says in a smooth voice that makes you think of radio and TV broadcasters.

“Bruce is someone who truly believes you have to be a lifelong learner,” says Mike Andrews, executive video producer and adjunct instructor in UTC’s Department of Communication and the person who submitted “Mental Health: One Woman’s Story” for the AP awards.

“He is never afraid to ask questions. He is never bashful about taking part in discussions. I could always depend on him to turn in assignments that went well beyond what was expected. His report that won first place at Associated Press is just one small example of the caliber of his work.”

Shaw shrugs off the praise.

“My life has been an exploration and my primary driver has been a pursuit of autonomy,” he says. “I tend to call myself a mile wide and an inch deep.”

A native of Chattanooga, Shaw first enrolled in Michigan State University in 1969, majoring in theater. He left after his sophomore year.

“I wasn’t focused. I was focused elsewhere, let’s put it that way,” he says.

That focus was a “countercultural” comedy troupe that wrote, produced and performed routines focusing on social and political themes. Based in Lansing, Mich., they went through a couple of names–The Street Corner Society and OK Used Theater Co. When that communal theater calling ran its course, he returned to Chattanooga in 1978 and enrolled at UTC. He can’t remember his major at the time. Music? Theater? He’s not quite sure. But he knows he didn’t stay long enough to finish his degree.

He did a lot of part-time work, including as a singing waiter at the Station House restaurant. With a young son at the time, he realized he needed full-time work, so he took some computer courses, got a job in Atlanta, then spent almost three decades working in computers and related technologies,. Twenty of those years were in Sacramento, Calif.

Returning to the Southeast to be close to his ailing father in Chattanooga, he landed a job in Charlotte, N.C. When layoffs hit that company in 2006, he came back to Chattanooga for good and enrolled for his second stint at UTC, this time as a music major.

“I had the idea of going back to school and, you know, getting some perspective.”

The perspective didn’t take, and he lasted only a couple of semesters before leaving again. In 2008, he landed some professional summer-stock theater work through the Southeastern Theatre Conference, but his dad’s condition worsened and from 2008 until his father died in 2012, Shaw was his sole caregiver.

But his never-ending and deep love of musical theater enticed him to pursue it more seriously, In 2013, as an independent producer/director, he directed his first theater production—“Balconies” by Vicki Mangier, formerly of Chattanooga. The following year he produced and directed “Gee’s Bend” by Elyzabeth Gregory Wilder, working in conjunction with the Chattanooga Theatre Centre.

In 2015 and 2016, he landed small parts in films around the region and roles for local theater companies such as the Ensemble Theatre of Chattanooga and the Chattanooga Theatre Centre. But he knew he had to start working on a more consistent basis.

“I started checking the possibilities of: OK, given all these interests and passions that I’ve developed over the years, what are my potential routes? I didn’t think of myself as retired and I still don’t.”

In 2016, he re-re-re-enrolled at UTC with a dogged determination to locate a definite path. He worked on video documentaries, produced and directed stage plays, adapted scripts and, in his main focus, worked on video documentaries, including ones on the controversy over Confederate monuments and the story of Ed Johnson, the black man lynched on the Walnut Street Bridge in 1906.

At UTC, one of his mentors was Gaye Jeffers, professor in directing and theater history. She says Shaw impressed her with his artistry, spirit, imagination and his understanding that theater is a collaboration, not a solo effort.

“Bruce is a builder of community. His approach to the creative process is determined, enlightened and adventurous,” she says. “As a theater artist in the holistic sense of that word, he invests in all aspects of theater and freely gives of his time and imagination to create.

“If you’re looking for someone to walk with you into the deep water or venture into the tall grass, Bruce will never let you down. He will also bring extra shoes, just in case.”

With diploma in hand, Shaw wants to continue his theatrical endeavors, including acting, directing and producing. But his ultimate goal, he says, is producing documentaries that address national issues from a Chattanooga perspective. He mentions CBS Sunday Morning as an example of the pieces he’d like to produce. But he’s staring into a challenge that’s familiar to many college grads.

“Honestly, I’m facing the same thing that most new undergraduates face and that is ‘OK, great, I got this degree but …

“You know, though, that’s the challenge.”