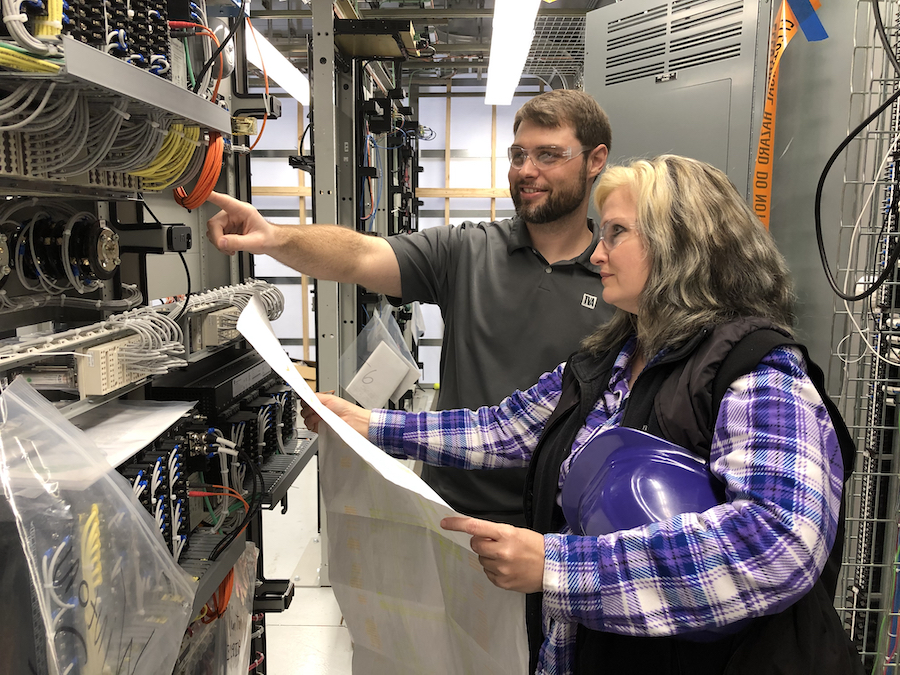 Noelle Currey and Josh Mabry, both UTC graduates, go over some of the testing programs for TVA’s electrical equipment.

For the 2019 award, three graduates were in the running:

For the uninitiated, the room is a land of confusion.

Hundreds of wires in colors across the rainbow run hither and yon, plugged into various electric panels. Grids filled with switches, relays, alarms, data recorders and fuses have octopus arms of wires coming in and out of them. Paper diagrams of the electric systems are swiped with streams of yellow highlighter.

Noelle Currey walks confidently and unfazed through the room. A project engineer at TVA, she understands the bewildering arrays and chats with Area Engineer Josh Mabry about the ends and outs of it. Both are graduates of the University of Tennessee at Chattanooga, both with bachelor degrees in electrical engineering. They are inside what is known as a “switch house.” The facility, which sits next to the Chickamauga Dam, tests electrical panels, switches and other equipment that eventually will be sent to various electric substations around the region.

It’s a time-consuming process that Currey, who graduated from UTC in 1991 with a bachelor’s degree in electrical engineering, has made worlds easier. For her groundbreaking work, she has received TVA’s highest engineering honor—the 2020 Ike Zeringue Engineer of the Year award. Currey,  TVA project engineer for transmission, calls it “the biggest honor of my professional career.”

“What I did for TVA is what I’ve done for everyone I’ve worked for in my professional career. What I developed for TVA is just an extension of a concept that I’ve been applying for two decades,” Currey said. “That concept is continuous improvement by finding every opportunity to reduce or eliminate repetitive tasks through automation.”

TVA President and CEO Jeff Lyash said her “innovation is helping TVA to continue to generate low-cost, reliable, clean energy—a key factor when companies choose to relocate or expand in our region.”

Currey’s innovation is the creation of a computer program—even though she’s not a computer programmer—to reduce design problems before the electric panels are even built. In the past, errors might slip through and caught in the testing phase. But once an error is found, the whole design process goes back to square one to fix it. From there, it must run a gauntlet through others who must sign off on the fix before the panel can be sent back for more testing.

“It stops the flow of everything, and it can be day or weeks to rectify it,” said Currey, who grew up on Signal Mountain. “Even one error causes everyone to stop.”

Her program examines the panels’ designs while they’re still being drawn on the computer, before they’re actually built. In under a minute—with a 100 percent accuracy rate—the program evaluates thousands of wires contained in those panels to find any errors, a task that previously required each wiring connection to be reviewed—one at a time—by an engineer.

“It get all the kinks and bugs out of it before it gets there and it that shortens up the time of the actual installation.

Although “humbled” by the Zeringue award, Currey said she hopes that she is merely the starting point for wider use of her concept across not only TVA but other companies, too, whether they’re in the power generation business or not.

“The visibility of what I do is elevated, so other people can latch on to the idea. It also applies to telecom and digital and anything else that has a standardized drawing step to it.

Along with her TVA prize, she also a Top 10 finalist for the Federal Engineer of the Year Award from the National Society of Professional Engineers. It will be presented on Feb. 14 in Washington, D.C.

And yes, she is going to the ceremony.