After hours of searching and one sprained ankle, the Rocket Mocs have decided: No rocket gets launched unless it has a tracking device on it.

But the searches—one in a grassy field in Kansas and one in the barren Mojave Desert—were worth it. The second launched a rocket that set the world record of 17,267 feet, or about 3.3 miles. The previous world record was 15,101 feet.

The Rocket Mocs’ win was announced Wednesday, Feb. 19, by the Tripoli Rocketry Association, a nonprofit that focuses on amateur rocketry. The organization has members from the United States and 22 other countries and maintains an international rocketry list for world records.

When the award became official, the Rocket Mocs—all of whom are students of the University of Tennessee at Chattanooga College of Engineering and Computer Science—had a singular emotion. 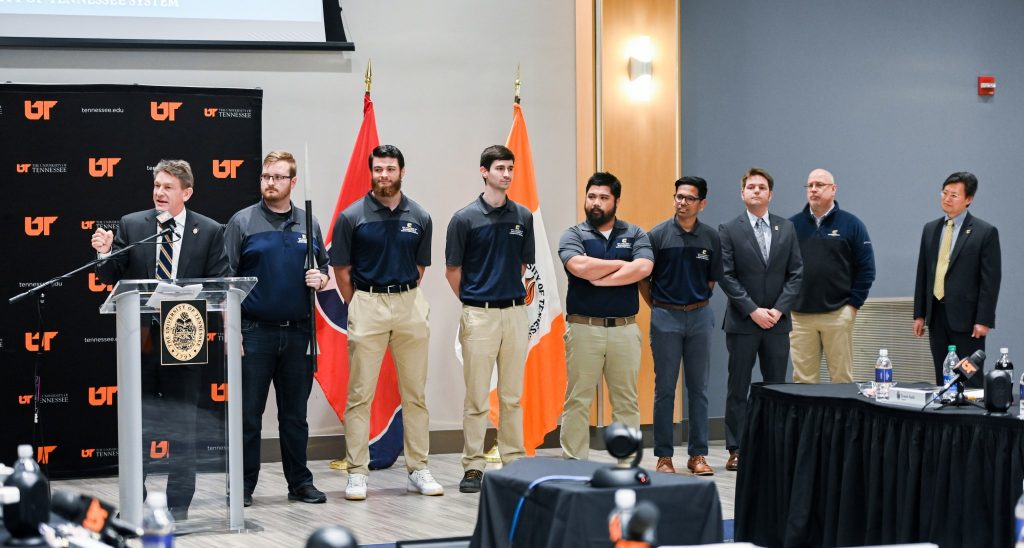 Interim UT President Randy Boyd recognizes the Rocket Mocs, their faculty advisor Trevor Elliott and College of Engineering and Computer Science Dean Daniel Pack during the UT Board of Trustees meeting hosted by UTC on Wednesday.

“Relief,” they almost harmonized just before being introduced by interim UT System President Randy Boyd during the UT Board of Trustees meeting being hosted at UTC on Wednesday.

With the announcement, they receive recognition and reward for their hard work, which included “having to deal with unforeseen problems and how to fix them on the go,” team member Jonathan DeGuzman explained.

“And walking for hours at a time,” adds his teammate, Mason Gregoire.

Those hours were spent looking for their rockets, which landed who-knows-where during their two launches last year. Andrew Byrd sprained his ankle during the search in Kansas in a field full of thigh-high grass “and these bushes with stickers all over them,” Gregoire says.

The rules state: No rocket, no win, no matter how high it went. Hence the Rocket Mocs’ decision that future rockets will have tracking devices onboard.

The rocket also must be completely intact—not a single part missing—or it’s disqualified. The one launched in Kansas actually soared to 18,797 feet, but one of its parts was gone when it landed so it was ineligible.

Success has been a hallmark of the Rocket Mocs, who formed in 2017. They were ranked  No. 3 in the country after competing the University Student Rocketry Challenge sponsored by the nonprofit Students for the Exploration and Development of Space (SEDS).

The next year, they were ranked No. 1 by SEDS after setting a new national record in the Rocketry Challenge by reaching 11,563 feet. The team placing second only hit 6,635 feet.

To win the 2018 prize, the UTC team had to wade through chest-high, murky-brown water in a Florida swamp to find the winning rocket after it came down. This year’s team was all new members with no swamp-swimming experience.

Setting the world record means more than just recognition for the prowess of the Rocket Mocs and the quality of the College of Engineering and Computer Science, says Dean Daniel Pack.

“We have put our college and UTC and Chattanooga on the world map!” he says.