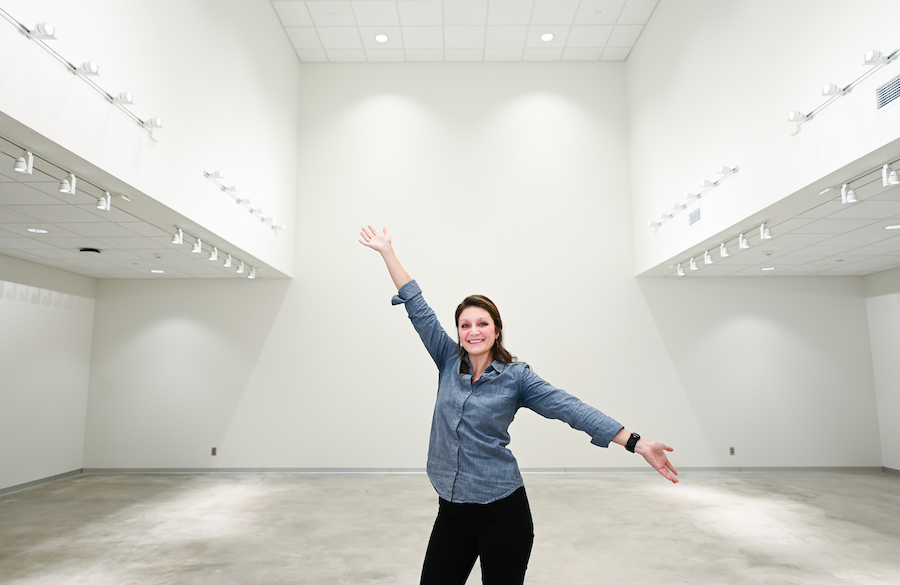 Early next year, the George Ayers Cress Gallery of Art will become the the first Institute of Contemporary Art in Tennessee.

In January, when Rachel Reese took over as director and curator of the George Ayers Cress Gallery of Art, she had ideas fueled by her excitement and energy.

Her plans for the gallery, located inside the newly renovated Fine Arts Center at the University of Tennessee at Chattanooga, were put into a five-month holding pattern but the excitement was still flying high. With fall semester in gear, her energy has an outlet and, in what she admitted is kind of a twist, the virus helped her plans.

“It gave me time to think about a timeline.” she said. “Honestly, so much has changed in the world, everybody is rethinking. Not only going back to some new normal, but I want to think of it as an opportunity to build something new. Think about where we are and start at that point and where we to go from there. We can start with a blank slate.

“I’ve been patient and I knew I wanted this to happen.”

One of her ideas is already in place. In the spring of 2021, plans are to rebrand the gallery as an Institute of Contemporary Art, the first such institute in Tennessee. As an ICA, it will make a number of changes in its focus. It will maintain its close connection with the UTC Department of Art, Reese said, but it will expand its reach onto the UTC campus and into Chattanooga as a whole.

“Making it more public-facing is a big part of this expanded mission and rebranding of the gallery. I want to think about how it can be more welcoming, more inclusive, think about how it markets itself in the community. Make itself more accessible so people know how to find it in the city, in the state,” said Reese, who has worked in art galleries in New York, Philadelphia and Atlanta, among others.

“What I love about ICAs is that they’re very responsive in real time. We can have the opportunity to work with artists who are responding to what’s going on right now,” she explained.

On campus, she wants to show how art can be incorporated into other academic departments and subjects in ways that may not be immediately obvious.

“I want someone from the biology department to say, ‘Hey, we have this idea, can we partner together?’ Or I can say, ‘Hey, I know this artist that is interested in nuclear energy but makes video art, so how can we think about partnering together to make something bigger?’ How can we tie these things together in a strategic way?”

From an art standpoint, the gallery can be used as a launching pad for projects campus-wide.

“Can an artist project video on a different building? Can an artist do something more in a public space? I think there’s a lot of opportunity and a lot of space to think about expanding our reach more to the campus community, to make ourselves more visible to the campus community rather than just coming to the Fine Arts Center and seeing an exhibition.

“It’s really an opportune time to think how it can serve the entire campus community and become more interdisciplinary and work with other departments on campus.”