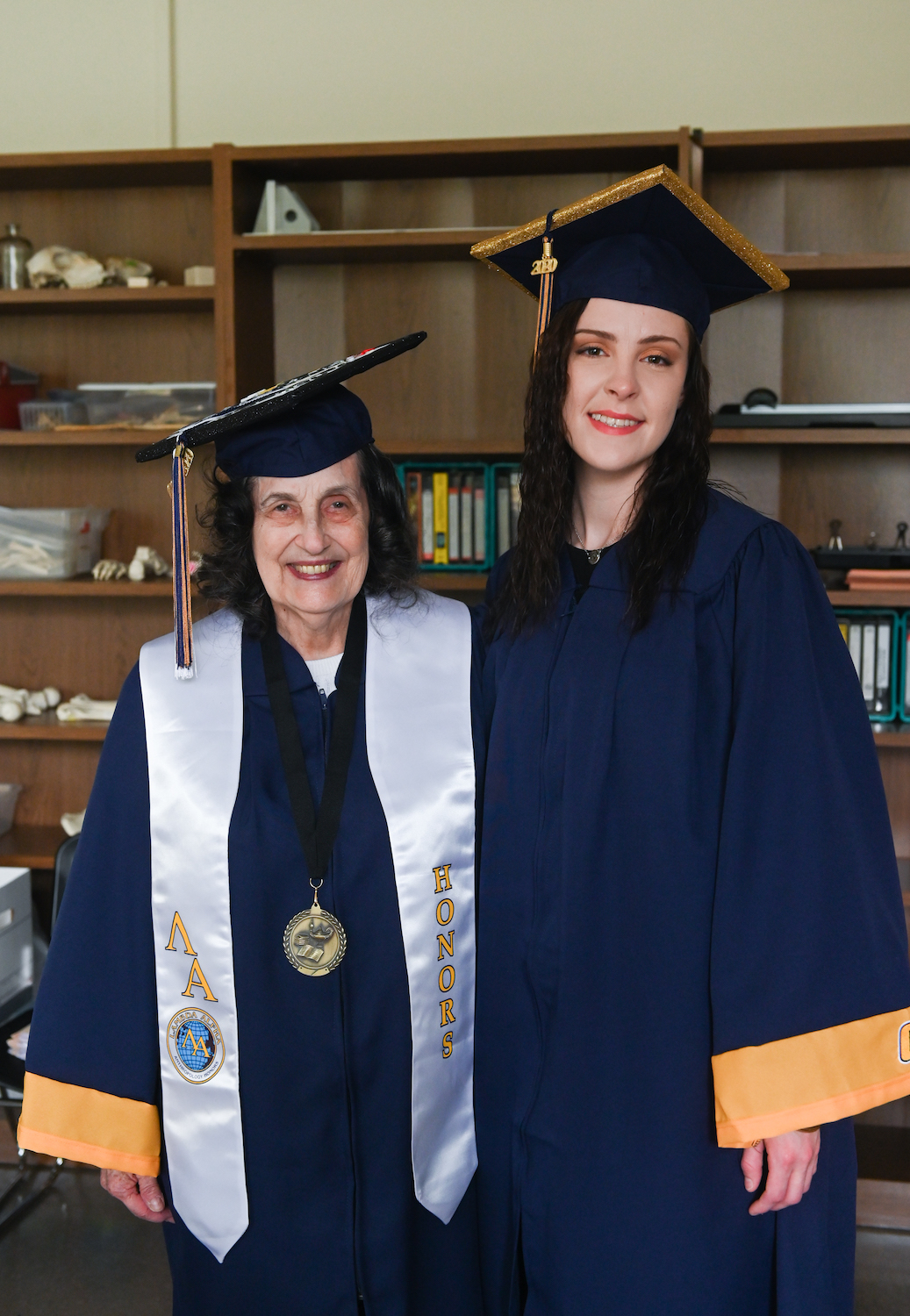 Pat Ormond thought it was a silly idea to go back to college when she was in her 70s.

She had spent most of her adult life working in accounting while raising her kids and her grandkids. She was retired. It was time to take it easy. What good would going back to college do? Why would she want to do it in the first place?

But her family wouldn’t let up.

“It was a little difficult, sort of a resistance to change and just the generally typical idea that, ‘I don’t want to go to college. I’m too old for college,’” recalled her granddaughter Melody Ormond. “And I was, ‘That’s a lie. Of all the women in our family, you inspire us to know that we can do anything at any age.’”

Even at 22, her granddaughter “has always been able to make her puppy eyes at me,” Pat admitted. “And I was becoming a pain. I can admit it now.”

The puppy eyes worked so well that, 42 years after she took her first college class, Pat is graduating Friday with a bachelor’s degree in anthropology from the University of Tennessee at Chattanooga. She will be 75 in mid-December. On the same day, Melody is graduating from UTC with a bachelor’s degree in psychology. They will receive their degrees during the same commencement ceremony at 3 p.m. on Friday, Nov. 20, on Chamberlain Field.

Pat also has begun work  toward a bachelor’s in history and hopes to finish the degree by sometime in 2023 and perhaps earlier.

“I always brag since she started going to school with me,” Melody said. “I’ve told people, like every class, all my friends, ‘Oh, Nana, she goes to school, my Nana, my Nana, did you hear that? And everybody’s always like, ‘Oh wow, that’s so cool.’ She knocked it out of the park.”

Pat’s daughter, Darla Ormond, also graduated from UTC in 1994 with a degree in special education, making it three generations of female Ormonds who earned degrees from the University. Darla now teaches in Lawrenceville, Georgia.

To describe Pat and Melody as Type A personalities is something of an understatement. Pat is a low-key force of nature, steady and steely. She’s obviously proud when she talks about what she’s done across her entire life, which includes marriage, kids, having a full-time career and going to school.

Melody is a more vigorous brand of energy—outgoing, confident and talkative about what’s she’s done, what she  hopes to do and what she’s doing now. The doing-now list includes jobs she’s had while in school—The Bridge at Ooltewah senior living community, Amazon and now a server at Applebee’s at Northgate Mall.

“She was working every semester. School was my work. So I’m very proud of her for what she’s done,” Pat said.

Graduating together was always the plan when they enrolled at UTC in 2017. To graduate at the same time, though, Pat sometimes had to take five courses per semester, plus labs. Despite the massive load, she ended with a 3.79 grade point average and is a member of the Lambda Alpha National Anthropology Honor Society. Melody has a very respectable 3.4 GPA.

In 1963, Pat enrolled in Marietta/Cobb Vocational Technical School in Atlanta and took several computer classes over the next few years. Computers were in their infancy at the time and, with what she learned, she was able to step into the industry on the ground floor. She turned her knowledge into a career helping accounting and CPA firms in Atlanta and Chattanooga set up their computer systems.

“I worked on just about every kind of system there is and implemented the systems,” she said.

In 1978, she took the Accounting 1 course at Kennesaw State University in Atlanta, which she considers her first true college courses since Marietta/Cobb was a vocational school. She left after one semester and moved to Chattanooga, where she worked at local accounting firms. In the 1980s and ’90s, she took a few courses here and there at UTC but never finished her degree. Raising kids and working 40- to 60-hour-a-week jobs threw up roadblocks.

“The money for the classes had to be used for classes only after living expenses and the childrens’ expenses were taken care of. This meant there was very little left for my education,” she explained.

After retiring, though, she was becoming something of a homebody, not a familiar or comfortable place for her. Living in a home with her son, grandson and granddaughters  wasn’t optimal, either, she added.

“We were all actually grumpy teenagers around that time.”

So after all the coaxing and needling and badgering, school finally seemed like a good idea, despite wondering whether she could tote the load, especially with the three-year graduation plan. She chose anthropology because she’s “always loved archeology and that was my prime anthropology push.”

Having grown up on a farm in North Georgia, she was given a sense of purpose and drive by her parents, Pat said. Her father told her she could do whatever she wanted in life, “and that was kind of odd for a man born in 1910.”

“We’ve always been told to stand up for your rights,” she explained. “Live a legal life, you know. Obey the law, but don’t let anyone push you around, whether you are male or female. And I was taught to do a little bit of everything. I can sew. I can thread a pipe. I can lay bricks. I can milk a cow.”

Melody, after graduating from Red Bank High School, spent her freshman year at Berea College in Kentucky, but it wasn’t a comfortable fit, so she came back home and enrolled in UTC as a sophomore. Just another connection between her and Pat, who also enrolled at UTC as a sophomore. Melody started as a philosophy major but, like Berea, that didn’t fit, either. Psychology caught her attention.

“I’ve always loved people and working with people and stuff, but I just didn’t really discover psychology until I took Introductory Psych, and then I just knew that was what I wanted to do. It’s my only passion,” she said.

Melody isn’t sure what she’ll do with her degree, but she’s leaning toward counseling veterans suffering from PTSD because she has a friend who is. Pat is in the same, semi-directionless position as far as her future, but she’s very good at research, having conducted it for professors at UTC and elsewhere. Maybe that’s her direction, she said.

Whatever path her life takes, Melody said, her grandmother will be her inspiration.

“She’s inspired me to sort of take my time. I have my whole life ahead of me,” she said. “It’s not inspiring me to be lazy, but just to enjoy my life because I know that I have a life to live. I don’t have to do it all now. Nana has seen and experienced a lot of things, and I would like to be able to say that when I’m older.”

For now, though, holding degrees in hand is enough for both of them.

As they walk in their upcoming commencement, both will be wearing mortarboards decorated by Melody. Hers says, “My cats got me to graduation.”

Her grandmother’s says: “After 42 years … I’m at graduation.”