Philosophical concepts and filmmaking blend together 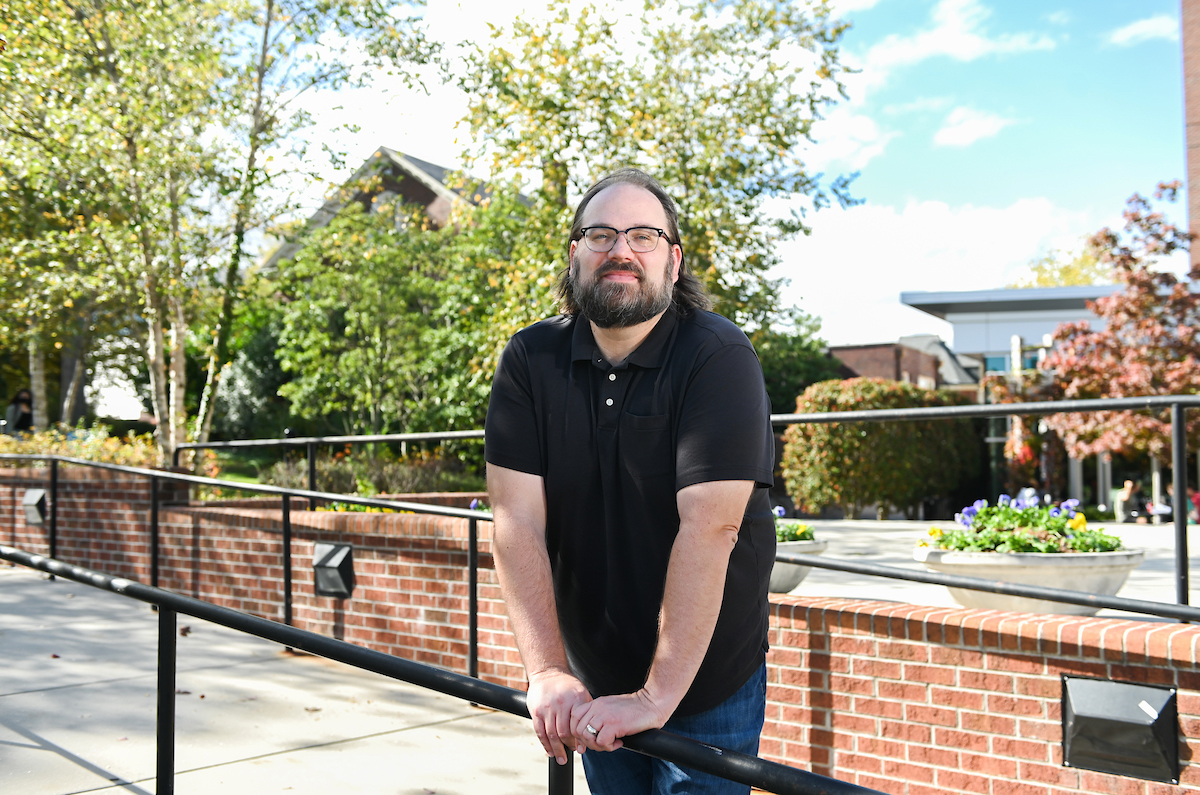 Associate Professor Ethan Mills is a fan of horror and science fiction.

To watch the films, go to: https://www.youtube.com/playlist?list=PLDewBXbGlYVBDuL5tkvrA-MlbjfdUN0yb

When Zuriel Hampton-Coffin learned he would have to make a horror film for his Popular Culture and Religion and Philosophy course, he wasn’t horrified.

“I was very excited and became more interested in the class,” said the freshman in entrepreneurship. “Knowing that it was a horror film didn’t really make a difference, I was just excited to make a movie.

“I really enjoyed the filmmaking process. It was much harder than I thought it would be, but it was very enjoyable.”

Getting students to think outside the box—or in this case, inside the movie theater—is one reason Ethan Mills, associate professor of philosophy and religion, assigns a three- to five-minute horror film as one of the assignments each semester in the course. Students’ reactions vary.

“Usually, they are a little surprised, and there’s a whole history of that because the name of the classes are pretty generic title: Popular Culture and Religion and Philosophy,” he said. “Some people go, ‘Cool. I’m really excited. This is going to be awesome.’ And sometimes I get the reaction, ‘Well, I’m not really a horror fan. I don’t really want to make movies, but, you know, maybe it’ll be interesting.’

“What I hope they get out of it is they’ll be able to appreciate popular culture at a deeper level, more thoughtfully,” he said. “You can think philosophically about anything.

Mills has used filmmaking technique in the class three times, including this semester. The latest batch will debut on Nov. 18. One will be selected as the best and win prizes.

The films must illustrate one of the philosophical tenets that have been discussed in class, including existentialism, denial of death, authenticity, absurdity, transhumanism and others. Students must explain, in writing, the concept they are highlighting in their script.

“When you’re making a film, you can’t just say, ‘So-and-so is feeling sad.’ You have to think about: How do you show that that character is sad? How do you show some of these abstract philosophical ideas? How would you take these ideas and put them in a visual medium?”

Hoffman-Coffin said representing the philosophical concepts was easier than he thought.

“You would think that writing scripts addressing philosophical concepts would be hard, but it really wasn’t. Professor Mills provided us with many different concepts, which made it extremely easy to create a film addressing those,” he said.

Breaking off into groups, students write the screenplay and design the filmmaking process from figuring out the camera shots, the lighting, the pacing and choosing the actors. Working with Wes Smith, who is in charge of the recording and filmmaking studio in the UTC Library, they use professional-grade cameras for filming and computer software and equipment to edit, create the music and add special effects their films. Some students use their smartphones to film.

“Actually, especially some of the newer phones, have pretty decent video capabilities, so they’re actually not bad,” Mills said.

Along with discussing the philosophical writings of Jennifer McMahon, Albert Camus, and W.E.B. DuBois, his students have read books and short stories and watched films of horror, then connected the two. They’ve discussed books such as the original Frankenstein, in which the “monster” is very intelligent but reviled. In doing so, the novel examines xenophobia and the nature of what it means to be human.

They’ve watched Get Out!, the 2017 horror film nominated for a Best Picture Oscar which tackles racism and transhumanism, the idea of using science to improve humans. They’ve read novels by Stephen King and the short stories of H.P. Lovecraft, whose writings conclude that the universe doesn’t make any sense and we are simply specks on an infinite canvas.

“Thinking about something like Frankenstein, which is still part of the popular culture 200 years after the novel was published, I find it kind of interesting to go back to the original source and see where it all came from,” Mills said.

With the COVID-19 pandemic in full swing, though, certain changes had to be made.

“I have to remind them that when they’re filming to be careful interacting with other people. So I’ve really been stressing the safety, especially on the filming aspect,” Mills said.

Group discussions can be done over Zoom, he noted, and social distancing and masks are used by students when actual filming takes place, except for the actors who have to speak the lines, of course.

One of his suggestions for safety-first is to create a found-footage film—think The Blair Witch Project or the Paranormal Activity movies. Those can be made using Zoom, reducing the amount of time students spend in face-to-face groups.

Whatever the style, students hopefully will discover new ways to enjoy what they read and see, Mills said.

“When we’re watching films or reading the short stories and novels that we cover, what I’m trying to train them to do is to find the philosophical content, getting those works. But when they’re making the films, it’s kind of from the other side. They’re putting that content into their own work, so they see it from both sides. I think that’s a really unique learning experience.”