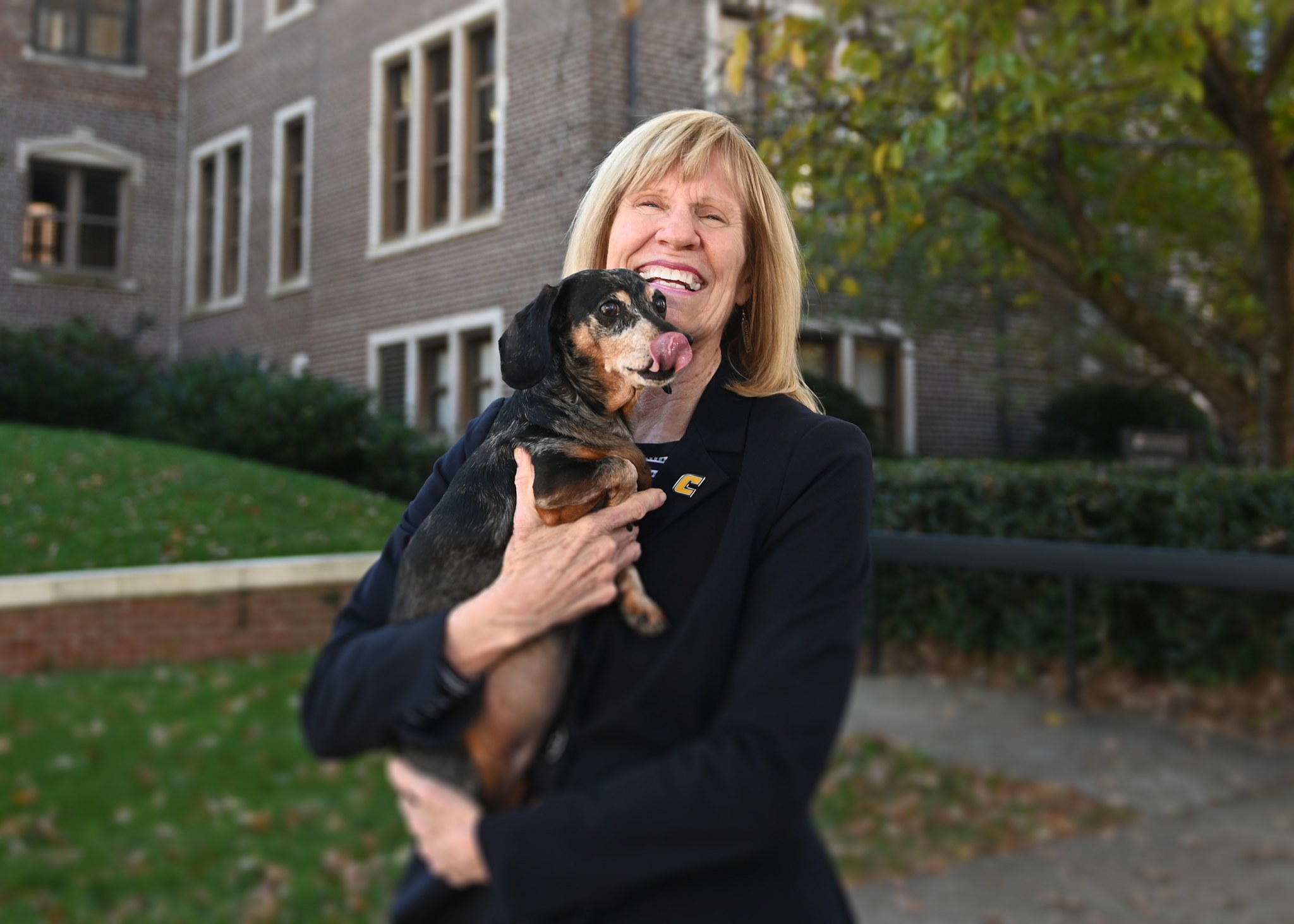 Terry Denniston and her dog Bubbles.

Terry Denniston’s eyes began to well up as she described what the University of Tennessee at Chattanooga has meant to her.

“It’s an extended family. It’s years of watching students come through our doors and leave knowing that they’re going to make the world a better place—and hoping that I’ve had just a little bit of opportunity to share in their life and their future,” said Denniston, who will be retiring at the end of December after spending more than 34 years with the University.

As Chancellor Steven Angle’s chief of staff, Denniston has been a trusted confidante, helping him navigate the waters when he first arrived on campus, serving as a liaison to student government and often being the first point of engagement when working with community members.

“Terry does so many things at so many different levels, and she was instrumental in my being able to get off to a good start when I arrived at UTC in 2013,” Angle said. “Terry told me where to slow down and where I could move quickly. She knew the backstory of the issues we were dealing with. Terry helped me navigate and understand the context of UTC, what had happened in the past and why.

“Terry was phenomenal in helping me get to know people on campus and in the community. We held many events and meet-and-greets and, I remember at my first UTC football game, she walked me through a parking lot full of tailgaters introducing me and helping me connect names and faces. Everybody knows her, and everybody loves her.”

Shortly after Roger Brown became the UTC chancellor in late 2005, he reached out to Lofton Stuart—then the executive assistant to UT President John Petersen and the current UTC interim vice chancellor of development and alumni affairs. Brown wanted to bring a chief of staff on board and contacted Stuart for candidate suggestions.

“After Dr. Brown asked me if I had any ideas, I said, ‘Oh gosh, not only do I have an idea, I know who you need to hire: Terry Denniston,’” Stuart recalled. “He asked me why, and I said, ‘No. 1, she’s the most organized person I’ve ever met. No. 2, she knows the campus as well as—or better than—any other person. No. 3, she has the community contacts based on her position as director of alumni affairs. Plus, you’ll enjoy working with her.’

“I have no idea how many other people that he interviewed for the job, but Terry was his hire, of course.”

Valerie Rutledge, dean of the College of Health, Education and Professional Studies, first met Denniston in 1995 when she came to UTC as a professor in the School of Education. Their paths crossed a little bit at the time but intertwined significantly when Rutledge moved into a leadership role.

Rutledge is having a hard time envisioning life on the UTC campus without Denniston.

Robert Dooley, dean of the Gary W. Rollins College of Business, said he has cherished both the personal and professional relationships he has developed with Denniston.

Along with jumping out of an airplane together last year—strapped to members of the Black Daggers, the official U.S. Army Special Operations Command Parachute Demonstration Team—Dooley and Denniston have worked together on many projects, including the Fall 2020 COVID-19 task force.

“You always knew you could talk to her about challenging issues or difficult situations and she would keep it in confidence. She would always shoot straight with you, and having somebody that you can go to is pretty valuable,” Dooley said. “I can’t think of anyone in the time that I’ve been here that has been more committed to this campus and the institution than Terry Denniston. I say that because she always seems to be working 24/7 for the campus. I know that’s probably not true, but it has never mattered what time I’ve reached out to her; she has always been available if I needed help.”

Denniston became a liaison and one of the advisors with the Student Government Association, calling the creation of a healthier relationship between the students and the Chancellor’s Office one of her more significant accomplishments. “Students are what we’re all about, and I’m proud of the connections that this office was able to make with students,” she said.

One of her duties as chief of staff was serving as the commencement coordinator. During the recent Fall 2020 graduation ceremonies on Chamberlain Field, the chancellor thanked Denniston for the 36 different commencements she directed—which saw 26,882 students receive their degrees from the University.

Highlights of her time at UTC also included being named a 2018 Woman of Distinction of Greater Chattanooga. Honorees chosen as Women of Distinction are recognized because they devote their time to improve the quality of life for others and are influencers to the community, encouraging Chattanooga women to make positive differences in the region.

Denniston paused for a moment before answering the question of how she wants to be remembered.

“I like to think of myself as a behind-the-scenes kind of person, but somebody that people can depend on, that is responsive when people need something, is trustworthy, can keep confidences, is flexible and open to new ideas, is approachable, and just has a servant’s heart,” she said, “and someone who loves UTC.”

Effective Jan. 1, 2021, David Steele, the UTC director of civic engagement, will assume the responsibilities of chief of staff.  An announcement will be forthcoming.