by UTC Communications and Marketing February 23, 2021 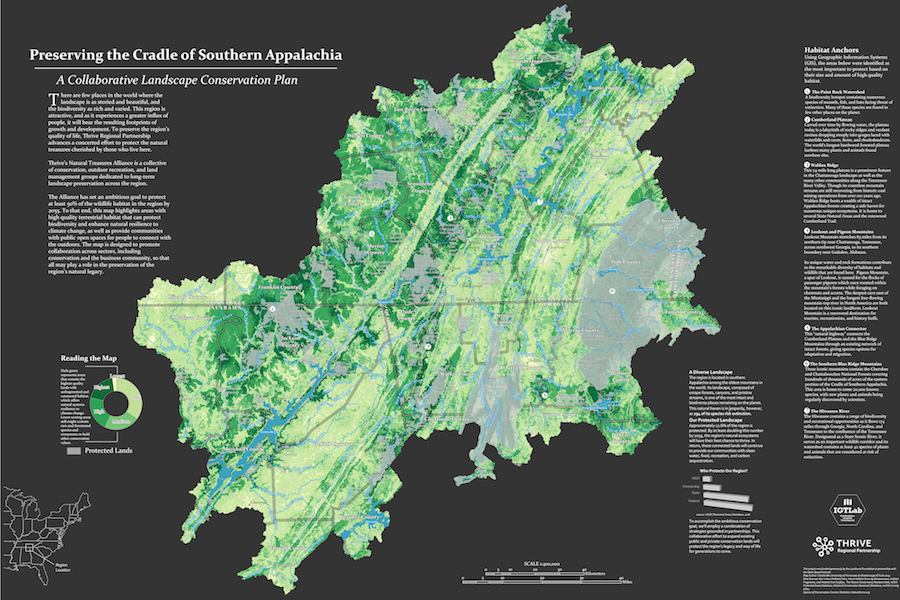 Map identifies wildlife areas with the most and safest biodiversity down to the ones that need more protection.

A team from the University of Tennessee at Chattanooga is part of a conservation initiative that has launched a $5.25-million fund to support land protection and climate-change work in the region.

The fund is guided by a map created by a group at UTC who spent three years on  the project. Charlie Mix is director of the UTC Geographic Information System (GIS) and Interdisciplinary Geospatial Lab (IGT), which designed the Cradle of Southern Appalachia map.

The award-winning map can be found  on the Thrive Regional Partnership website and is part of the Cradle of Southern Appalachia master plan, which was  designed collaboratively by Thrive and the Natural Treasures Alliance. It identifies seven specific landscapes in the region that need protection

The $5.25 million slated for the Southeast Tennessee region is part of an $18-million effort by the Open Space Institute. Founded in 1974, the institute focuses on environmental conservation efforts in the eastern United States.

An additional $66 million is expected in matching public and private funds, according to the institute.

“The forests of the Southern Appalachians are not only critical for their natural and local heritage, they also protect the land that matters most as we take on the largest environmental challenge of our time—a changing climate,” said Kim Elliman, president and CEO of the Open Space Institute.